October 5 2010
0
Today, soldiers and officers who have manifested themselves in military service are usually celebrated with state awards - titles, orders, medals, and a little less often - nominal weapons. And what encouraged warriors in Russia several centuries ago?

For a start it is worth mentioning the term itself. Dahl’s explanatory dictionary explains “to reward” how to “endow, bestow, bestow ... for what merit, for service, for feats”. Ushakov's dictionary says in the same spirit: “reward is a gift, an honorable reward for any merit, distinction”. And the Russian Constitution states that state awards of the Russian Federation are the highest form of encouraging citizens for outstanding services in protecting the Fatherland, state-building, the economy, science, culture, art, education, education, health, life and rights of citizens, charitable activities and other outstanding services to the state. In general, a reward is a recognition of the merits of a person, his useful activities, and noble deeds. A sign of courage and courage in the interests of the state, the people. 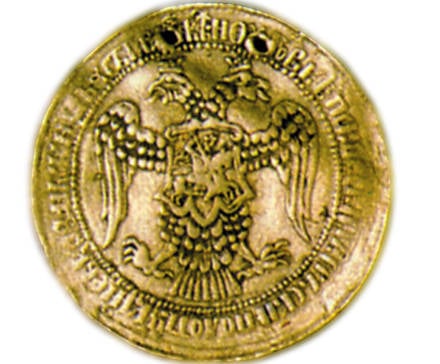 In our usual form, the system of state awards was established in Russia under Peter the Great. However, already in the 10th – 12th centuries in Kievan Rus, princes had a custom to reward soldiers for feats of arms, for example, a gold hryvnia, a massive gold hoop worn around their necks.

The first news of the issuance of a special distinction, intended to be worn by the awarded, is contained in the Russian chronicles and dates back to the year 1100. In the story about the reflection of the Polovtsy raid on Kiev under Vladimir Monomakh, Alexander Popovich is mentioned - the future hero of Russian epics, Alyosha Popovich, who distinguished himself in battle and was awarded for this by the prince himself. There are also records when, in the 1147 year, during the riots in Kiev, the rebellious people pulled from the Ryazan boyar Mahail a gold hryvnia and chains with a cross.

In the XV century, honorable, comparatively mass awards - “gold” became common in Russia. Outwardly, they looked like coins, but in essence were the prototype of the award medal. Often, such a gold and gilded coins were awarded to the whole army, which returned with victory, from the governor to the ordinary warrior.

And in the XV – XVI centuries, when a centralized Russian state was formed and strengthened around Moscow, new types of incentives for public service appeared. Many of them were not only honorable, but also had the character of material rewards. They distinguished themselves with gold and silver utensils, furs, cloth, fur coats and caftans. In 1469, the Ustyuzhans, for their courage against the Kazan Tatars, received from Ivan III, among the awards, three hundred odnoryadok, sermyag and sheep fur. The envoy of the Roman Empire, de Collot, who came to Russia in 1518, writes, as an eyewitness, that the sovereign had favored the brave, beloved warriors with clothes, with which the grand-grand pantries were filled with countless numbers. In 1683, Prince Golitsyn for various services was granted an axamite caftan on sables at a price of 393 rubles 5 Altyn. Sometimes clothes were issued ready-made, stitched, but more often in pieces, or portischi, such as, for example, for the Chigirin campaigns of 1675 and 1676, they received: Prince Romodanovsky - “on a fur coat velvet gold, on a worm earth, in 60 rubles, and two forty sables, in 110 rubles. " Rezel Rzhevsky - “on a satin gold coat, on green land, in 30 rubles, and two forty sables, on 50 rubles.” Lieutenant-General Snake - "portische kamki and two pairs of sables, in 15 rubles."
The most expensive gifts were received, of course, by large voivods and close boyars. Thus, in 1577, Tsar Ivan the Terrible, in recognition of the merits of the boyar Belsky for taking the Livonia castle, Volmar, awarded him with a gold chain. And in 1591, for the expulsion of the Crimean Tatars, Tsar Fyodor Ioannovich granted Boris Godunov also a chain and a Russian fur coat with golden buttons removed from his shoulder in a thousand rubles - a colossal sum for those times.
In addition to gold and utensils awarded weapons. For example, the saber with a gold inscription on the blade has been preserved: “7150 (1642) The Tsar and Grand Duke Mikhail Fedorovich is all over Russia granted this saber of the stolnik Bogdan Matveevich Khitrovo”.

One of the highest marks of distinction was the mace. She was sometimes received by high-ranking government officials for their services.

Also awarded with armor. In 1552, many warriors were honored for conquering Kazan. In 1583, two armor from Ivan the Terrible were sent to the conqueror of Siberia Yermak.

There were also special ways to celebrate military merits, for which they complained of state diploma, the name of "servant of the king," "gracious word." It was considered a great honor if the king sent a messenger to the distinguished governor to ask about health. These were, as we would now say, forms of moral encouragement.

Such were the awards granted by the Russian sovereigns in the form of external differences. With the arrival of Peter I, much has changed. In the following 300 years, a new system of state awards has emerged, more familiar to us. Up until the October Revolution, it looked like this:
I. The highest favor of the emperor.
Ii. Rewards ranks and titles.
Iii. Land award and lease assignment.
Iv. Emperor's gifts:
a) simple gifts and gifts with a monogram image;
b) snuff boxes;
c) highest rescripts;
d) cash payments;
e) the award of honorary citizenship and Tarkhan dignity;
e) award caftans;
g) transfer to the guard;
h) awarding the right to wear a retired uniform;
i) service benefits award;
j) rewarding with the Honor Service Honor Badge;
k) awarding with the “Mariinsky sign”;
m) regimental awards, subdivided into ten species.

“Highest grace” entailed a reduction by one year of the deadlines for obtaining ranks and orders for years of service. As for the rest of the points, I think, it is not necessary to say anything again.
By the way, the ranks in our usual form were introduced by the Table of Ranks in 1722. The Order as an honorary award, the highest award appeared in Russia a little earlier, at the turn of the XVII – XVIII centuries. The first Russian Order of the Holy Apostle Andrew the First-Called Peter the Great established 10 in March 1699 after returning from a trip to Western Europe as part of the “Great Embassy”. The Order was the most important order of the Russian Empire. They were awarded monarchs, high dignitaries, both military and state, the most important foreign allies of Russia. We will not enumerate the rest of the order, because our magazine has repeatedly spoken about them. However, it is interesting that for some of the orders their gentlemen had to pay to the treasury.

Rates on orders changed in Russia more than once. Recent registry changes were made in 1860 year. Since that time, for the Order of St. Andrew the First-Called, who had one degree, they paid 500 rubles, St. Alexander Nevsky (also had one degree) - 400 rubles, St. Vladimir (had four degrees) 1 degrees - 450 rubles, St. Catherine 1 degree - 400 rub.

For orders of lower grades contributions were not too burdensome. For example, 3 rubles were paid for St. Vladimir's 45 degree, 4 rubles for 40 degree, 3 rubles for St. Anna's 20 degree and 4 for 10 degree, St. Stanislav 3 degree - 15 rub. (for 4-th degree of this order did not pay at all).

The holders of the Order of St. George of all degrees, according to the statute of this award, were exempted from monetary contributions. Moreover, when rewarding them with other orders for combat exploits, they were not supposed to take contributions from them. 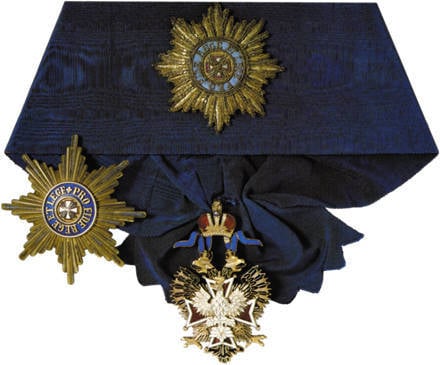 Of course, the question arises: why the laden orders had to pay money? True, they did not remain at a loss, as with the receipt of orders they acquired a number of privileges and privileges, sometimes very tangibly affecting their financial situation.

For example, until the middle of the XIX century, the receipt of any of the eight orders of the empire (regardless of degree) gave the commoner the right to hereditary nobility, and later the lower degrees of the orders of St. Stanislav and St. Anna brought personal nobility. Acquisition of a noble title was associated with a number of advantages, such as, for example, exemption from personal taxes, recruitment, and the right to preferential loan loans from a bank.

Many received an annual cash reward - cavalier pensions, as well as lump sum benefits. It turned out that the owners of higher degrees of state awards - people who stood, as a rule, on the upper rungs of the hierarchical ladder, who had highly paid positions - through the system of contributions to the order's capital helped the needy cavaliers and their families.