Why did they sell Gazprom 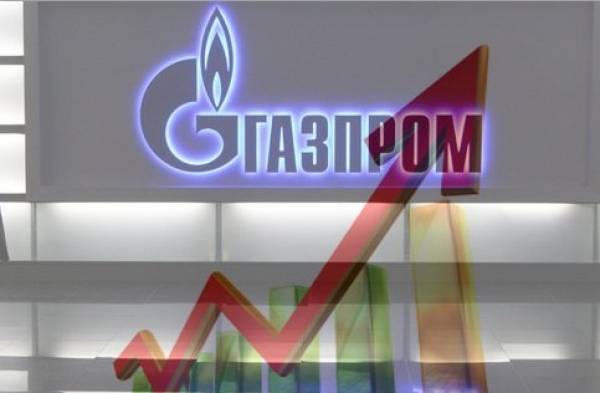 America of Russia ... will buy a ship?

The Russian gas concern sold the shares, it seems, not only in order to make peace with Ukraine and quietly complete the construction of Nord Stream 2. The company seems to have invited a strategic investor.

At the finish of 2019, oil and gas industry experts actively discussed primarily the payment by the Russian gas giant of the by no means indisputable debt to Ukraine, as well as new sanctions against Nord Stream 2. At the same time, the sale of a large stake in Gazprom for some reason remained outside the brackets. 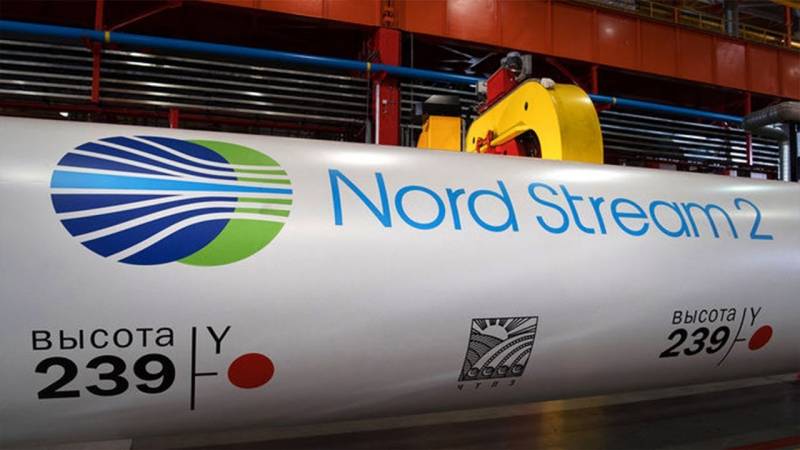 The general public did not even notice it, although this operation was, in fact, the largest privatization deal in recent years. Few of the experts came up with the idea of ​​linking everything that happened into a single chain. Profile publications simply drowned in detail.

But at the same time, some advanced experts, for example, the long-term head of the analytical division of Otkritie Bank Alexander Razuvaev, decided to draw not only some real conclusions, forecasts, but also extraordinary assumptions.

Now that there is no question of a categorical rejection of privatization, in one form or another, Razuvaev considers even a scenario for the sale of a gas package to Americans possible. Moreover, the package is so large that it will make any further obstacles to the same "Nord Stream 2" simply impossible.

Apparently, it is precisely one of the large American companies that the expert considers as a worthy replacement for the Swiss company Allseas, which, as you know, is forced to stop pipe laying work for SP-2.

The reason for this decision was the new US sanctions, which impose an arrest on the accounts of Gazprom's partner companies involved in the creation of the pipeline. Meanwhile, when only 2 km of pipe remained to be completed at Nord Stream 150, it suddenly became clear that Russia, the largest gas producing country, did not have a single pipe-laying vessel capable of quickly completing construction. 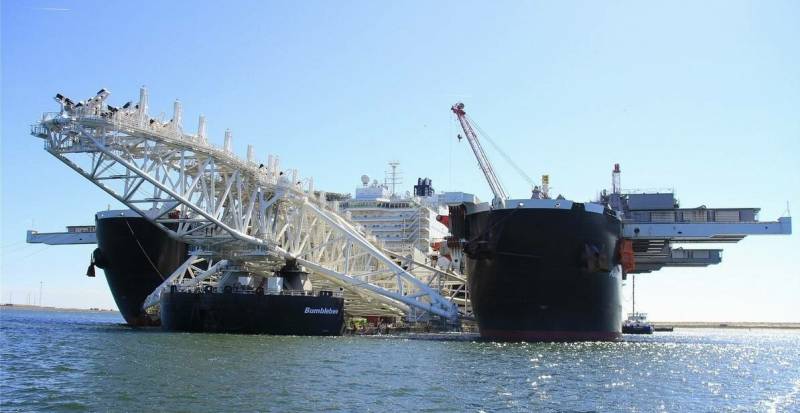 Which ships will continue to lay the pipes of Nord Stream 2 is not yet clear
The idea of ​​building new ships on their own does not hold water, as it will take years to realize for which the SP-2 can simply be scrapped. A direct purchase of ships of this type in the face of acute shortages in the world market could cost Gazprom an exorbitant price.

Is it any wonder that now a radical, although seemingly absolutely unpatriotic, way to get out of sanctions once and for all is being proposed. After all, the way quiet privatization has gone the other day testifies: today you can really sell anything.

And to panic, to sound the bells about the sale of the public domain and the threat to national security hardly makes any sense. In no case should we forget that the Russian gas giant is not building the Nord Stream 2 alone and cooperating not only with Germany, but with a whole consortium of leading multinational corporations.

This consortium includes German companies Wintershall and Uniper, Austrian OMV, French Engie and the Anglo-Dutch oil and gas giant Shell. None of the consortium members ever concealed their desire for closer cooperation with Gazprom, up to mutual entry into capital.

So, the participants in the consortium for the construction of SP-2 never hid their readiness to enter the capital of Gazprom. However, this was invariably prevented by concerns that the state would lose control of the concern. Currently, it owns a controlling stake in Gazprom mainly through the Federal Property Management Agency (more than 38% of the shares) and Rosneftegaz (10,74%).

At the same time, a significant share of the company's shares was transferred to the position of the so-called treasury and quasi-treasury. It is customary to call shares that are in the hands of the issuer itself, as well as under the control of subsidiaries with the possibility of free sale, but at the same time with the loss of voting rights. 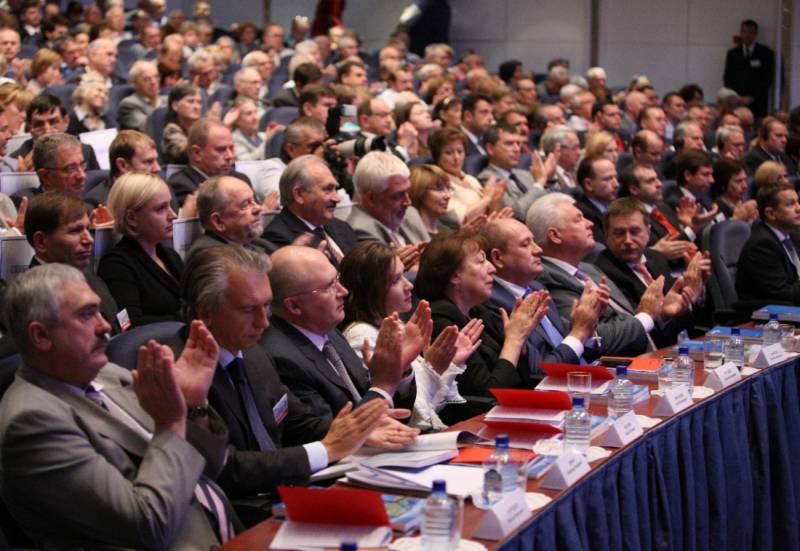 This is the main similarity of such securities to preferred shares, which also do not vote, but which guarantee the receipt of dividends. Shortly before paying off its debts with Ukraine, Gazprom quietly did what it was not allowed to do for many years: sold a large block of its shares. More precisely, not their own, but quasi-treasury.

The size of the package was 6,52 percent, and it was implemented in two stages to a certain consortium of investors. The composition of the consortium is not disclosed, but it is known that, in addition to the Russian government, it included a number of independent pension funds.

Experts do not hide doubts that the government has replenished its controlling stake with at least a significant number of non-voting shares. There was simply no direct need for such a transfer of property from one pocket to another.

It was much more important to create competition and stimulate the purchase of outside investors, among which, according to foreign observers, oligarchic structures were probably present. In what form, not so important, more important, that someone finally got a pass to the club of the elite - co-owners of Gazprom.

However, no one can say who exactly it was decided to allow among the co-owners of the gas giant. Apparently, there is no reason to expect that the secret will become apparent in the foreseeable future. 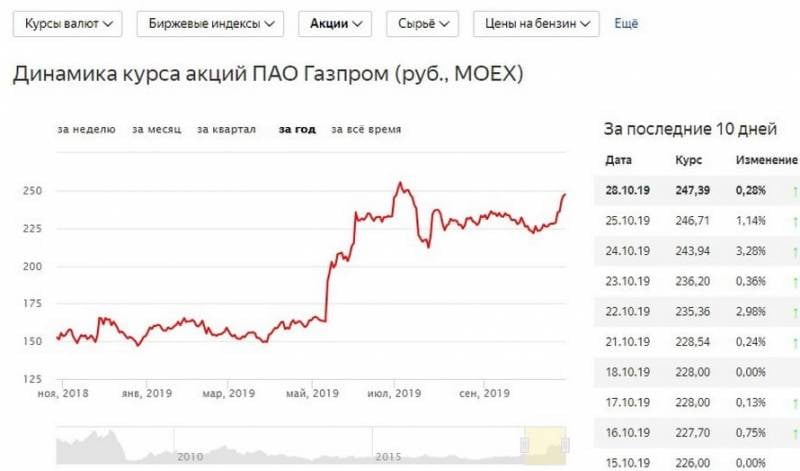 Gazprom’s shares are now, after the July jump in quotes (see chart), are considered highly underestimated due to debt problems, delays in the construction of both flows and US sanctions. Only after the completion of infrastructure projects, including SP-2, will cash flows be directed to dividends.

And only then, according to Alexander Razuvaev, the Russian gas giant will be able to "turn from a calf into a cash cow of the budget." Some underestimation of gas securities can be judged by the proceeds from the last transaction, which amounted to about 327 billion rubles.

By the way, in both cases, non-voting quasi-treasury shares also went on sale, but it is not yet clear whether they will become voting as a result of the transfer to the hands of new owners. It turns out that both of these transactions, essentially privatization, were also carried out at a substantial discount to the market price of Gazprom shares.

So, in July, the discount to the value of securities at the close of trading amounted to 5,4% on the eve of the announcement of the transaction, in November - 11%. Now underestimation of quotes can reach up to 15%. Because of this, the sale of a large block of shares may not seem like the right market decision.

However, the set of problems that she helped solve refutes this negative assessment. The transfer of a 6,52% stake in Gazprom became the largest transaction with the company's securities for its entire history. Gazprombank acted as the organizer of the sale of securities, and the order book was formed on the Moscow Exchange.

It is characteristic that it did not occur to anyone to call the deal with Gazprom shares “the sale of the Motherland”. But in Ukraine, the payment of Russian gas debt, as one would expect, was immediately called “overpower”, although to someone the whole combination seemed to be “stolen”, that is, betrayal. 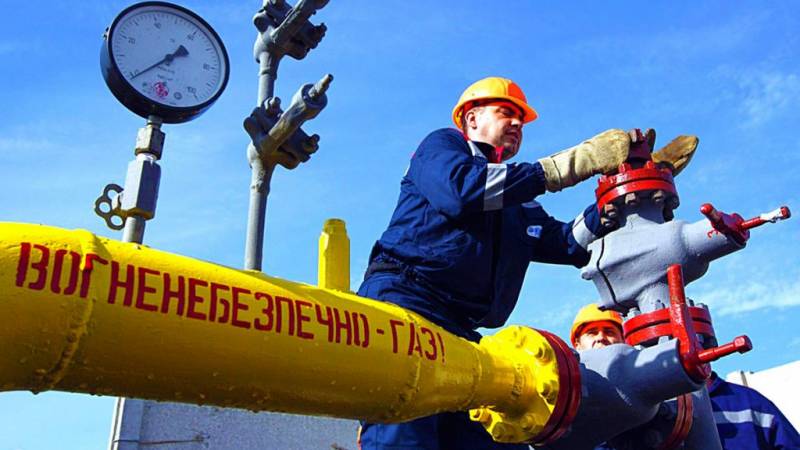 But the first consequence of this decision was the agreement of the two countries that mutual claims on the gas issue are nullified. Russian Energy Minister Alexander Novak called the $ 2,9 billion paid “a drop in the bucket” compared to the risks that were avoided. He noted that the “nullification” also provides for the removal of the seizure of property at the expense of decisions taken in legal claims.

Gazprom does not need protracted litigation with Ukraine, if only because it threatens the lion's share of export contracts oriented to Europe. They were a serious obstacle to the implementation of both ambitious transit projects - Nord Stream 2 and Turkish Stream.

At the same time, Ukraine is now hardly worth worrying about both the supply of Russian gas to the country and the loss of the advantages of the main transit country. Incidentally, the latter is also evidenced by the fact that Gazprom did not plan to make any changes to the current transit agreement with the Ukrainian Naftogaz.

And note this, just like that, even taking into account the prospects that open up for the concern with the commissioning of the “Turkish” and “Northern” streams. It remains to be recalled that Gazprom’s shares were never seen as suitable for mass privatization or conducting so-called public IPOs, share offerings.

Apparently, the idea in itself to attract the masses to the management of the concern, albeit in a very indirect form, really scares someone. It’s better to invite another oligarch.

We are in Yandex Zen
Situational analysis of the death of the MH17 flight (Malaysian Boeing 777), made on the basis of engineering analysis from 15.08.2014
Sniper craft basics
150 comments
Information
Dear reader, to leave comments on the publication, you must to register.