Nuclear war. A dosimeter for everyone! 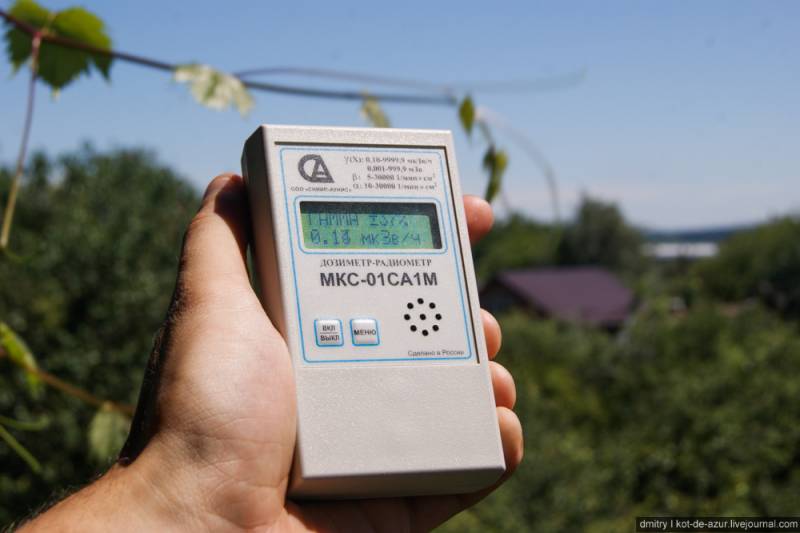 Dosimeter - the cornerstone of preparation for nuclear war

“It was a nuclear winter. A radioactive snow was falling, a dosimeter cracked comfortably ...” So a story on the theme of nuclear war with New Year’s flavor could begin. But the article is not about this, but about readiness for a nuclear war and its consequences. Or, more precisely, about certain aspects of this matter.

Dosimeters - for all or almost all

In my opinion, the most important thing in preparing for a nuclear war (practical preparation, not just a word) is the mass production of dosimeters, radiometers and other devices that can record and somehow measure radioactivity. This production should be so massive that dosimeters were at all or practically at all, and their use and wearing would be as commonplace as using, say, smartphones.

Now, of course, dosimeters are on sale. Only here they are not cheap and you can’t call them affordable. For example, a household dosimeter MKS-01CA1B costs 22,2 thousand rubles. Even compact samples have very tangible prices. For example, a small Radex One dosimeter (weight 40 grams, length 112 mm) costs 6,9 thousand rubles. Or the Soex 112 dosimeter (the size of a felt-tip pen, 126 mm long) - 4,3 thousand rubles. For a specialized device, this is a lot, the vast majority of consumers, who, in principle, can lay out that kind of money for an electronic gadget, will not buy a dosimeter specifically. 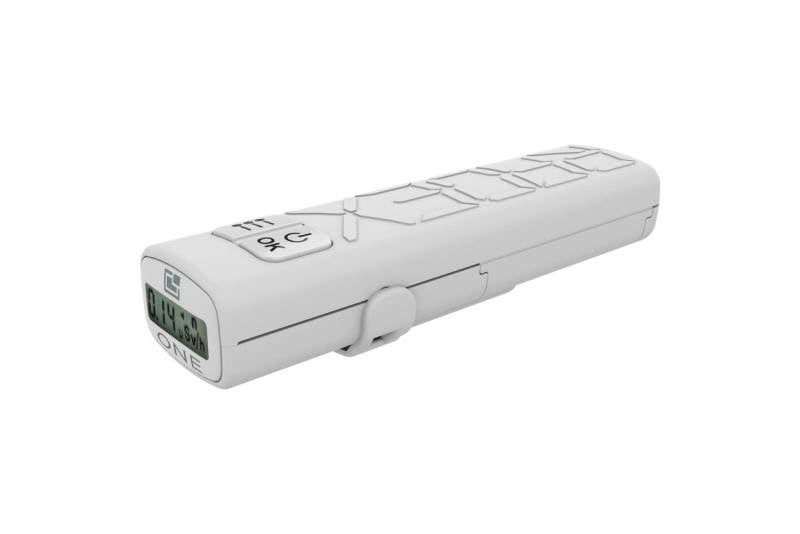 Radex One is one of the best dosimeters for personal use. If he also cost less ...
But it is necessary that such devices be widespread. If almost everyone has a dosimeter, then any spot of radioactive contamination, any source of radiation will be quickly detected. Radiation is dangerous when nothing is known about it and therefore it is easy to irradiate. A detected radiation source can be removed, bypassed, or shortened to a safe time near it. From the point of view of the military command and civil defense leadership, the presence of millions of dosimeters makes it possible in principle to quickly collect comprehensive information about the radiation situation both in peacetime and during a nuclear war, and to properly respond to it.

It is more expedient, of course, to mount dosimeters in various household appliances as a kind of add-on. If the USSR were seriously preparing for a nuclear war, and did not pretend to be ready for it in words, then the dosimeters would be built into televisions, radio sets, radio sets, and radio points. It could be a very simple device, which would include an alert with “vile” wheezing and a blinking light bulb at a dangerous level of radiation (say, 0,5 x-rays per hour). And the instructions would say that if your TV suddenly wheezed and a red light flashed, you need to urgently call the police and report it.

But this has not been done. Now, in the current conditions, it would be most advisable to make a car dosimeter (car devices are less sensitive to dimensions than gadgets for personal use) and add it to the required set of car accessories. There are almost 52 million cars in Russia. If all of them are equipped with even the simplest dosimeters, then this will already create the opportunity to collect data on the radiation situation at least in the territory covered by the road network. Car dosimeters can be connected to navigators, collect and transmit measurement data to a centralized system, military or the Ministry of Emergencies. This system is also very useful in peacetime: it allows you to identify point sources of radiation, abandoned or lost by someone, and it can also identify attempts to illegally transport radioactive materials.

In the conditions of a nuclear war, when zones of radioactive contamination arise after nuclear strikes, a large number of dosimeters makes it possible to solve the tasks of reconnaissance of the radiation situation most quickly and completely. This is important because this environment is changing rapidly. After a nuclear explosion, a cloud of radioactive fallout is carried by the wind, which can change direction and speed, thereby affecting the size and configuration of the radiation wake. The trace and then change: the radioactive elements are carried by wind and water, which leads to the spread of the trace, as one could see from the infection zone in the Urals after the accident at the Mayak plant. The level of radiation and the change in the boundaries of the infection zone must be constantly monitored in order to make the right decisions.

This requires a lot of dosimeters. Established army radiation intelligence is unlikely to cope with such a task on their own. Firstly, a lot of time will pass before they spread out. Secondly, they are unlikely to cope with the study of the situation on an area of ​​tens or even hundreds of thousands of square kilometers of areas of radioactive contamination, which will undoubtedly arise after massive nuclear strikes. 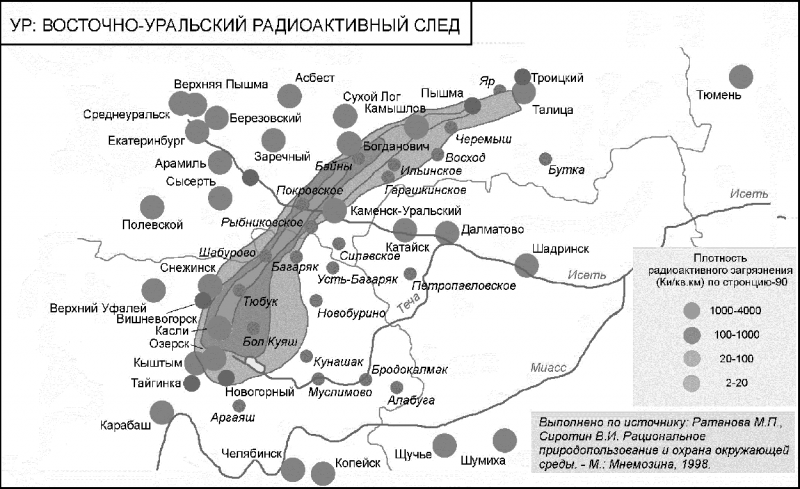 Radioactive contamination zone (how it might look on the example of the East Ural radioactive trace)
That is why it is necessary to accumulate millions and millions of dosimeters in peacetime, to make this device widespread, so that at the decisive moment they are available and in places where they are needed, and not in warehouses hundreds of kilometers away. If the dosimeter is in every car, then by already elementary questioning of the drivers or by viewing the device log it will be possible to collect fairly accurate information about the spot of radioactive contamination that has appeared.

What measures can be taken further? The first is that the zone of radioactive contamination is a zone of limited and controlled access; therefore, a commandant’s office and its own commandant’s service are needed there. Its tasks are, on the whole, similar to the tasks of commandants of the front-line zone.

The second - you need to quickly, within a couple of hours or faster, determine where the population (and all those staying in the zone should simply be kicked out due to the high level of radiation), where it is worth deploying the decontamination work, and where you can simply get by with access control with a limited stay. All this needs to be done quickly so that the population and those who are in the zone of infection do not have time to gain a significant dose. The biggest difficulty is the evacuation of the population and its placement in evacuation centers.

Thirdly, the introduction of access control, the establishment of control points and radiation shelters for him, patrolling the territory, the creation and deployment of decontamination detachments under the command of the commandant's office of the radiation contamination zone. Personal dosimeters greatly simplify the organization of access control.

The commandant's office of the radiation contamination zone is fully capable of resolving all issues of residence and stay on its territory, the use of military or economic facilities located there, and issues of decontamination. Therefore, from a military-economic point of view, radioactive contamination is not at all as dangerous as it is customary to think about. But provided that the commandant’s office will have a sufficient number of dosimeters.

By the way, I do not at all consider the experience of work at the Chernobyl NPP optimal and even successful from the point of view of organizing a radioactive contamination zone. Rather, this is an example of how it was not necessary to do what should be considered separately and in the context of preparations for a nuclear war.

Ctrl Enter
Noticed oshЫbku Highlight text and press. Ctrl + Enter
We are
Radiation accidents: from Chernobyl to Severodvinsk. Dosimeters in the USSR and the Russian FederationAn-12 in Afghanistan
143 comments
Information
Dear reader, to leave comments on the publication, you must to register.