Alexander Petrovich Tormasov. He defeated the enemy and restored Moscow

July 20 2012
4
The end of the 18th century and the beginning of the 19th century for Russia is the time to strengthen geopolitical power in Europe and the world. And the role of talented commanders in this process is difficult to overestimate.

Alexander Petrovich Tormasov is one of those thanks to whom the Russian Empire gained unprecedented political weight.

Alexander Petrovich was born in 1752 year and at the age of 10 years was given a page to the court of Peter III, but in the same 1762 year as a result of a palace coup, Catherine the Great came to power.

In March, 1772, Alexander, with the rank of lieutenant, was assigned to the Vyatka musket regiment. This is the first appointment in Tormasov's 30-year-old military career. In May of the same year, with the rank of captain, he became adjutant under the command of General Bruce, and two years later he received the rank of prime minister. In 1777, Tormasov received the rank of colonel, and in 1782, at the insistence of Prince Potemkin, he was sent to pacify a revolt of the Crimean Tatars. There he gains first combat experience as a commander of equestrian units. In June, 1783 was appointed commander of the Dalmatian hussars. In September, the 1784 unit received a new name - the Alexandria Light Regiment, and the next rank of Tormasov was the Colonel. 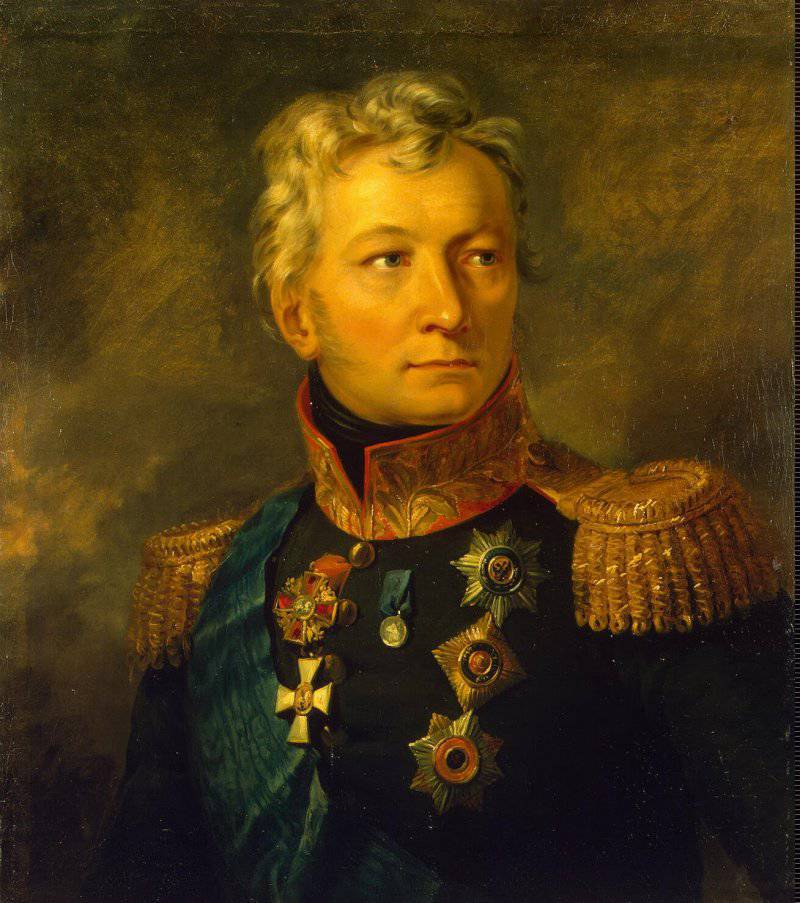 In 1787, the second Russian-Turkish war began, but he only participated in the fighting at the final stage, in 1791, as commander of the horse brigade in the army of Prince Repnin. June of the same year found Tormasov in the fortress of Izmail, whose commandant was Kutuzov. Here, Alexander Petrovich performs a successful reconnaissance, which resulted in losses in the Turkish vanguard and the slowdown of the entire Turkish army.

At the end of the month, June 28, Tormasov led an attack of cavalry on the left flank, which largely determined the outcome of the Machinsky battle.

In the 1794 year, the Poles already got from the cavalry of Tormasov: first under Mobar, and on September 28 under Matseevits, where he commanded the left flank of the main forces. And during the assault on the suburbs of Warsaw led one of the attacking columns.

In 1798, Alexander Petrovich receives the rank of major general and already in the next - the general from the cavalry.

In 1799, he was expelled from the service with the phrase “for defiant recall and disobedience to the one to whom he was subordinate.” But a year later he was completely restored to the ranks and titles, and on December 6 was appointed the chief of the Life-Cuirassier His Imperial Majesty's regiment. In 1801, he received the rank of lieutenant general, and a new appointment as inspector of the Dniester Inspectorate for Cavalry and for the leave of Alexander Württemberg - Livonia Inspection. Before 1803, Tormasov was on leave for health reasons, then he was appointed Governor-General of the Kiev Province, in 1807 - in Riga, in 1808, as Commander-in-Chief of Georgia and the Caucasus Line.

In this post Tormasov is before World War 1812 of the year. Upon arrival, Alexander Petrovich faced serious geopolitical and military challenges. Caucasian peoples on the verge of uprising: Abkhazia had already proclaimed independence from the Russian Empire by that time, Dagestan was waiting for the support of Persia. In addition, the latter tried to coordinate with the Ottoman Empire. Napoleon, who on the eve of the war with Russia incited the Turks to act more actively, added fuel to the fire. True, on this front, the emperor of France outsmarted himself. Neither Turkey nor Persia held out before the start of his war with Russia.

Tormasov and his subordinates, among whom such talented commanders like Simanovich, Lisanevich, Kotlyarevsky, in a short time inflicted such crushing defeats on the Turks and Persians, that the sultans of both states thought much about the justification of conflicts with Russia in principle.

Brilliant victories in the Caucasian theater allowed our country to avoid a destructive war on two fronts. It is difficult to overestimate the role of Tormasov in the success achieved.

The Patriotic War of 1812 of the year found Tormasov the commander of the 3 observational army, covering the southern direction from a possible attack by the Austrians. Under an agreement with Napoleon, Austria was obliged to set up an 30-thousandth corps against Russia. At the same time, the Austrian commander Schwarzenberg received "recommendations" from his government not to persist strongly and not to move away from the borders. But contrary to expectations, Napoleon did not send the Austrians to the southern part of the country, but demanded support from the Schwarzenberg corps in the main line. Thus, the southern flank of the Great Army was covered only by the Saxon corps, led by Rainier, scattered along the Slonim-Brest-Corbin-Pinsk line.

Assessing the situation, Tormasov, having detached a detachment as part of the dragoon brigade and 2's Cossack regiments to guard the borders, moved the main forces to Corbin. The city defended the 5-thousandth corps under the command of General Kengel. 27-July Tormasov with a sudden throw surrounded the city and forced the Saxons to surrender with powerful artillery fire, all attempts to break through from the environment were stopped. The wooden city was extremely vulnerable to fire; by the end of the battle, 200 was hardly intact from more than 70 buildings.

2300 privates and 66 officers were taken prisoner. 8 guns were also captured. The losses of the Russians turned out to be ridiculously small - 77 killed and 182 injured.

Three days earlier, on July 24, Brest was taken, and after Corbin, the third army occupied the town of Pruzhany.

Rainier, who had come to the aid of the Kengel garrison, was confused. The question of where to send the main attack, sharply stood in front of the Saxon corps. Thinking, Rainier decided not to risk it and wait for Schwarzenberg, who had received Napoleon’s permission to cover the right flank of the advancing army by that moment. Thus, besides the important psychological effect, the victory at Corbin was also of great strategic importance, pulling back the considerable forces of the Great Army to the south.

35-thousand corps Schwarzenberg and Rainier attacked Tormasov at Gorodechno. Obvious success was not achieved by either side, but, given the numerical superiority of the enemy, Aleksandr Petrovich decided to retreat to Lutsk to join the 30-thousandth Danube army led by Chichagov. Near Lutsk, the total number of Russian troops was 60 thousands of soldiers and officers. Schwarzenberg, not eager to die for the ambitions of the French emperor, leaves the borders of Russia.

Almost immediately after the half-voluntary expulsion of Austrians, Tormasov received an order to appear at headquarters at Kutuzov’s disposal. There he is engaged in the internal organization of the army - the supply and replenishment of the army.

October 11 stands for Maloyaroslavets, where one of the most important battles of World War II took place, forcing Napoleon to retreat along the ravaged Smolensk road.

Tormasov perfectly proved himself in the battles of Maloyaroslavets, Vyazma and Red. In the battles near the village of Krasnoe, Alexander Petrovich commanded the cavalry corps, which was to block the road to Orsha near the village of Dobroe. As a result, the French managed to retreat to Orsha, some sources claim that the Old Guards managed to break through the Russian barriers, others that Tormasov caught only the rearguard under Davout’s command, breaking up the covering units and seizing 6 guns.

After Kutuzov fell ill in Bunzlau, Tormasov temporarily assumed supreme command over the army. After the battle of Lutsen Tormasov asks for dismissal due to poor health. This ends the brilliant military career of the famous general.

Then Tormasov became a member of the State Council, and then, in 1816, he occupied the position of Commander-in-Chief of Moscow. After the Napoleonic invasion and fires, the city was in a very unsatisfactory condition, but Tormasov didn’t scare the dreadful state of affairs. With his inherent consistency and accuracy, he began recovery work. And in August, 1816, Alexander I, visiting the city, elevated Tormasov to the count's dignity.

Alexander Petrovich's health continued to deteriorate, and 13 September 1819 year on, 67 year of life, he died.

В stories Russia's Alexander Petrovich Tormasov forever remained a brilliant commander and talented statesman. His talent has brought glory to Russian more than once arms. The covenant of Suvorov "to fight not by number, but by skill" by Tarasov was carried out flawlessly.

Alexander Petrovich did not have the bright military talent of Napoleon or the insight of Kutuzov, but at the same time he very accurately evaluated the capabilities of his opponents and his own, leaving no chance for the latter to win over himself. According to contemporaries, he had a magnificent appearance, which he retained until his old age; was always flawless in clothes: at the ball or in battle. The reward was stingy, considered good service a direct duty and the natural order of things, although for his ministry he won numerous awards, among others: the Order of St. George 2 class, the Order of St. Vladimir 1 class decorated with diamonds of the Order of Alexander Nevsky, the Order of St. Andrew Pervozvannogo and Polish White Eagle and St. Stanislav, for their participation in the suppression of the uprising in Poland received a golden sword decorated with diamonds with the signature "For Bravery".