In December, 1917, at the height of World War I, a talented German gunsmith, Hugo Schmeisser, patented “a light machine gun chambered for 9x18 mm” - nothing more than a submachine gun. Created with all thoroughness, Schmeisser PP, who received the MP-18 / 1 index, resembled in appearance a “normal” light machine gun. Equipped with a heavy wooden lodge, a rifle butt with a neck, a massive perforated casing, it had a large mass and was served, like a regular machine gun, by a two-person calculation - an arrow and a carrier of ammunition. Meals were supplied from a drum shop designed for Luger pistols with a cartridge capacity of 32. Weapon It had a reversible sight for shooting at a range of 100 and 200 m. In 1918, the PP began to be mass-produced at the factories of Theo Bergman and soon entered service with the “stormgroup” of the Kaiser Army. Despite the fact that after the defeat of Germany in the First World War, weapons of this type were removed from service under the terms of the Versailles Treaty, the MP-18 served as a prototype for a large family of PPs, not only in Germany, but also in England and Japan. 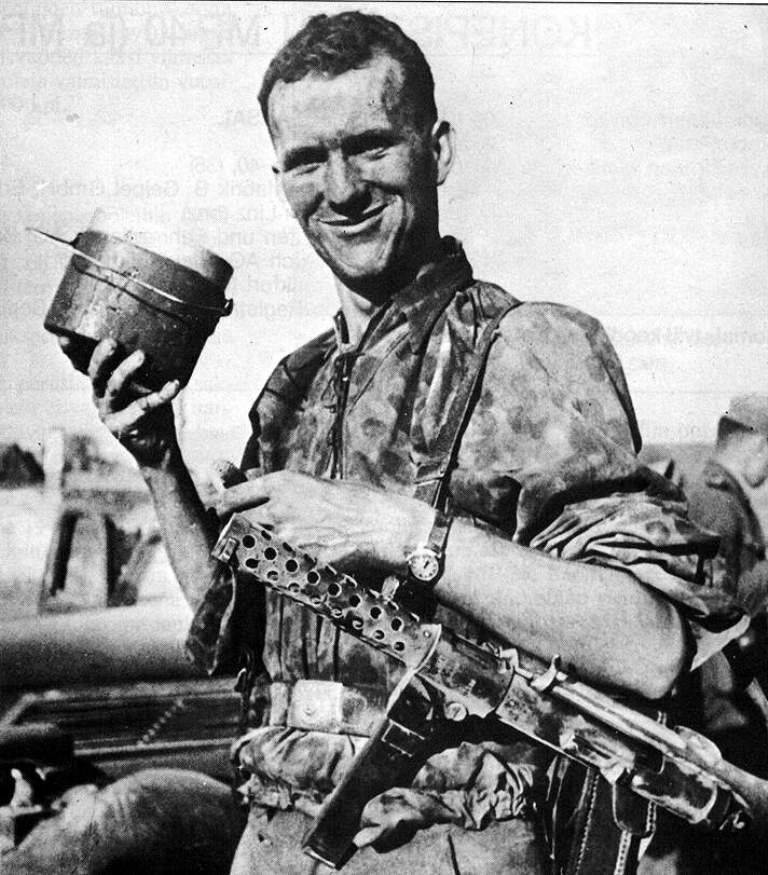 SS man freshened from the pot. The 9-mm submachine gun of the Schmeisser system MP 28.II hangs on the shoulder.

Having found a loophole in the conditions of a peace treaty, the German designers began to improve the PP as a "police" weapon. In 1928, the MP-28 was adopted by the German police - the development of the MP-18 with a fire selector, a sector sight “notched” at a distance of up to 500 m and a simple 20 or 32 box magazine cartridge. The same cartridge “Parabellum” was regular for the MP-28, but export versions of the 7,63, 7,65 and even 11,43 mm were produced! The most successful option was under the extremely powerful Mauser cartridge 7,63x24 mm with a bottle sleeve and good ballistic characteristics. This model was widely used by the Franco during the Spanish War 1936-1939. In addition, these PPs were successfully sold to Latin American countries. But by the beginning of the Second World War, the PP Schmeisser was hopelessly outdated and remained in service only with the police forces.

The PP Schmeisser-Bergman was the prototype for the creation of later samples - MP-34 (long-barreled) and MP-35 (short-barreled), which differed in some original technical solutions - in particular, both of these samples had a plunger handle behind the bolt box. She was equipped with a disconnector and did not move when fired. In addition, on the MP-34 / 35, the problem of fire selection was originally solved - when you clicked on the upper part of the trigger, a single shot was fired, and on the lower part, automatic shooting was opened (similarly, the selection of fire was carried out on German light machine guns). But these two samples inherited most of the flaws of the MP-28 - bulkiness, large mass, unbalanced design, aggravated by the location of the store on the right. For some time the MP-34 / 35 stood in service in the Luftwaffe, the police and the tank crews, but soon a new, very successful and well-known German PP appeared on the scene ...

The Wehrmacht was one of the first armies in the world in which parachute troops appeared. As the elite military units should have done, the German paratroopers, the Green Devils, were armed with the latest weapons specially developed for them. In 1937, the company Erma Waffenfabrik to arm parachutists was created simple and compact (relative to the samples available in Germany in service) PP. It had a distinctive, very elegant appearance and had a number of absolute advantages over its contemporaries. Its index was MP-38, and it was designed by Hanno Vollmer. It is not clear why in our country this PP is called nothing but “Schmeisser”.

The main reason for the failure of most software is clogging of the cavity of the breeder with mud through a long slot for the cocking handle. On the MP-38, this problem was solved in a very original and effective way. The bolt box inside had longitudinal milled channels, into which dirt was diverted, without interfering with the movement of the bolt. And the return spring was protected from contamination by three tubes, when the shutter moved, telescopically entered into each other. These tubes also performed the role of a pneumodemper - the air enclosed in them, when the valve rolled back, began to compress, slowing the latter down. As a result, the MP-38 had a fairly low rate of fire - 450 rds / min.

The barrel did not have a casing in order to maintain compactness and save weight. But the front sight was defended by a massive muffler, and under the barrel there was a heel - an emphasis for firing from the vehicle, from the viewing slots of the armored personnel carrier and other small embrasures. The box and handle were made of bakelite. The massive butt plate was quite good in hand-to-hand combat as a percussion weapon. A folding butt was attached to the back plate, when retracted, it did not protrude beyond the contours of the weapon and did not interfere with the shooting.

The power supply was carried out from a box-shaped “horn” with a capacity of 32 cartridge, unified with the stores of earlier types of PP. Reversible sight allowed to fire at the "standard" range in 100 and 200 m. Protection was carried out by inserting a cock in the crankshaft slot of the bolt box, locking the bolt in the rear position. In addition, the cocking handle could be retracted when entering a special recess on the bolt box, locking the bolt in the forward position. It was also important that the PP simply understood and assembled without the use of tools.

The flaws in the MP-38 was not so much - especially heated trunk and the absence of the fire selector caused special complaints. In addition, the location of the left side of the cocking knob caused some inconvenience when carrying. The PP was rather heavy for its size (4,85 kg with a magazine) and expensive - the milled receiver of a complex shape was extremely non-technological. As a result, it was decided to switch to the manufacture of the bolt box by stamping from steel sheet. At the same time, its cross-section was not circular, but figured, in order to ensure the removal of dirt from the gate. In this form, PP Volmer was called MP-40. It turned out to be cheaper and easier without losing combat performance. On some series of weapons, instead of the retractable platoon grip, a simple pin was installed.

By 22 June 1941 in Germany, PP type MP-38 / 40 were in service with infantry, troops, tank crews, pilots, sailors, SS troops ... He became extraordinarily popular, his mass production was adjusted. By the end of the war, more than 2,5 million MP-38 / 40 were produced in the factories of Germany, as well as its satellites and conquered countries! Probably, only the submariners did not have it “in the state”, although often one or two BCPs of this type were still taking a hike - it was necessary to defend something from the sailors from the sunk ships, which represented a mortal danger for the submarine ...

Volmer's weapons fell in love with reliability and unpretentiousness for external conditions and temperature - both in Africa and near Moscow, in the 30-degree frost, the MP-40 fired equally well. It was with his help that the Wehrmacht soldiers showed the world at the first stage of the world war the importance of the density of fire on the front. The Soviet soldiers with three-lines, the use of which implied the ability to shoot well over long distances, felt the advantage of a quick-fire melee weapon in full.

According to the experience of the battles near Moscow at the end of 1941, Mr. Hugo Schmeisser suggested “crossing” the MP-40 and the MP-28, taking from the latter a wooden butt with a lodge and a fire selector. The result was the MP-41 — a rather strange and inconvenient PP sample that lost the MP-40 grace and noticeably submerged. He did not receive much distribution.

By the end of the war, the manufacturing quality of German BCPs was greatly reduced. This did not slow down the combat qualities of the weapon - barrel wear came after a couple of dozens of issued horns. But the reserves of these PP warehouses were so great that after the end of the war he officially was in service with many countries - Romania, Bulgaria, Hungary, France, Spain, Portugal ... The single facts of the application of the Folmer PP were recorded during the Vietnam War and even in 80 years, in Afghanistan. 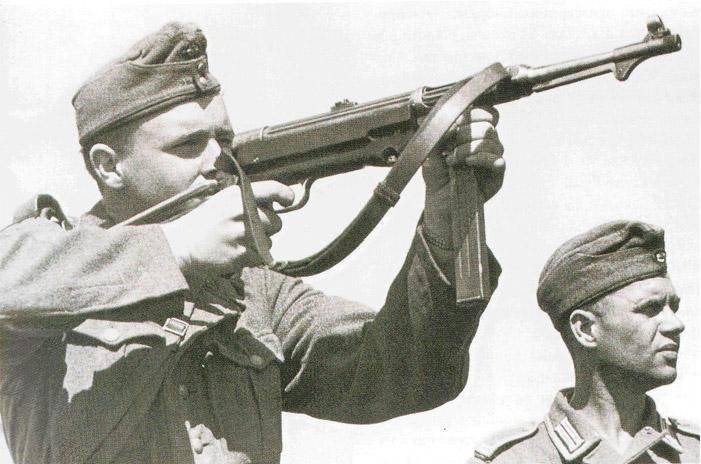 By the end of the Second World War, the Wehrmacht began to experience a shortage of PP - well-proven MP-38 / 40, the production of which was dispersed across a large number of enterprises, became too expensive. In December, 1944 was decided to copy the British STAN. A copy of STAN MK.2, dubbed "Potsdam Herat", was planned for release at the Mauser plant. At the beginning of 1945, the installation batch was released, but blind copying turned out to be too expensive - the price of one “Potsdam Herat” turned out to be equal to 1800 for the Reichsmark! (more than the machine gun). As a result, STEN was additionally adapted to the conditions of production in Germany. Outwardly, this was reflected in shortening the casing while lengthening the barrel and "turning" the store neck down. In this form, the PP went into production under the symbol MR 3008. Before the end of the war, around 10 000 units of German STANs were released.

Attempts were made to copy the Soviet PPS, adapting it to the Parabellum cartridge, but this work did not come out of the experiment stage.

Author:
Ivan Kudishin "METOL" for sweeping trenches. Comparative analysis of the submachine guns of the Second World War ", the magazine" Equipment and weapons "