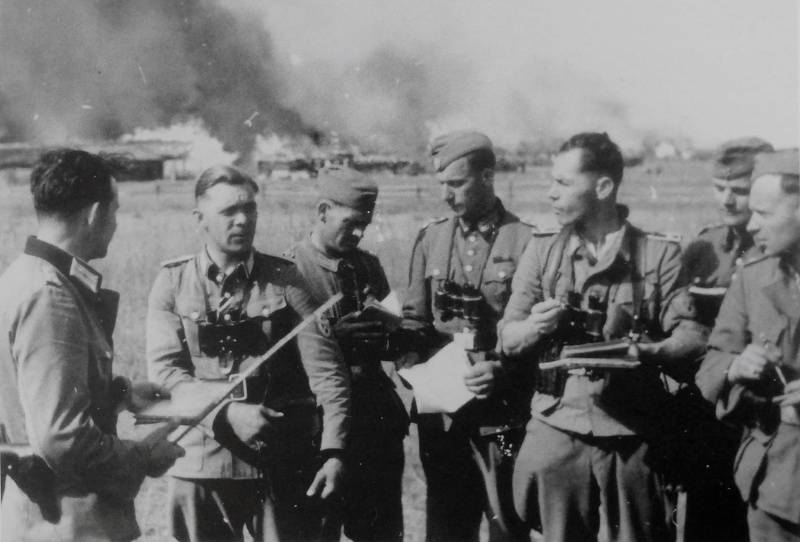 "Crusade" of the West against Russia. June 22, 1941 the whole of Europe flooded our Motherland, but nothing came of it! Why? Russia survived thanks to the Soviet people's power.

In World War I, Russia had allies. Together with us, the German bloc fought France, England, Italy, Serbia, Romania, the USA and Japan. And Finland and Poland were part of the Russian Empire, were not our enemies. However, Russia lost the war. And the USSR fought with all of Europe, led by Hitler, with the expectant position of England and the USA, and won a brilliant victory. Our troops planted a red Russian banner in Berlin.

Of course, England and the United States fought, especially at sea and in the air, distinguished themselves in the bombing of German cities. They won at third-rate theaters. But the Third Reich could not be defeated only in Africa, at sea and in the air. The German ground forces were destroyed by the Soviet Army.

Why did the Soviet Union win? The situation in 1941 was much worse than in 1914. In order to crush the Soviet global project, the Soviet (Russian) civilization and the society of knowledge, ministry and creation, which became an alternative to the Western project of enslaving humanity, almost all of Europe was given to Hitler’s society. His rise to power supported the financial capital of France, Switzerland, England and the United States.

There are two main reasons. First, Russia, under the leadership of Stalin, prepared for an extremely brutal, bloody war, a battle for the survival of Russian civilization, power and people. Two five-year plans were not in vain. New armed forces were created, a powerful military-industrial complex, industrialization was carried out, with the formation of new industrial areas in the east of the country, remote from the future front. The leading industries — aircraft manufacturing, engine building, machine tool building, shipbuilding, etc. — were created practically from scratch. The development of science, technology, and education ensured technological independence. Collectivization ensured the country's food security. Most of the “fifth column” was destroyed, the remnants went underground, disguised themselves.

Secondly, a new society has been created, united, united, believing in a bright future, ready to tear to shreds of any enemy. In Russia at the beginning of the 1940s, completely different people lived than in the 1910-1920s or at present. For Russian men in 1914-1916. the war was completely unnecessary and incomprehensible. Peasants (the overwhelming majority of the population) desired land and peace. This is for educated people, Constantinople, the Bosporus and Dardanelles, Galician Rus meant something. But there were a minority of those. In addition, most of the educated people, the intelligentsia, hated the tsarist regime and wanted it to die. In the 1920s, society was sick, broken by a great war and blood, Troubles, general chaos and collapse.

By 1941, the Soviet government was able to create an incredible new society.

In perestroika and after perestroika, the liberals created the myth of the “scoop”. Mean, lazy, dumb Soviet man. Like, the Soviet people worked from under the stick, out of fear of the NKVD, did not learn anything, did not know how, wrote denunciations to each other, etc.

Interestingly, the Russian liberals borrowed this myth from the Nazis. The Nazis before the war also contemptuously thought about the Soviet (Russian) people. They remembered the Russians of 1914. The soldiers, mostly from peasants, were illiterate, technically inferior to the Germans. And under the rule of the Bolshevik commissars, according to the German elite, the Russians became even worse. Slaves of the Communists. However, after the outbreak of war, the Germans quickly changed their minds about Russian (Soviet) people.

Gestapo analysts, based on data received from all over the Third Reich, presented a report in the summer of 1942, which contained interesting information about the population of Russia. The Germans had to conclude that the pre-war propaganda about Soviet people was false.

The first thing that surprised the Germans was the appearance of Soviet slaves (ostarbeiters) brought to the Reich. The Germans expected to see peasants and factory workers tormented by work on collective farms. However, it was the other way around. Obviously, the Russians ate well: “They don't look starving at all. On the contrary, they still have thick cheeks and they must have lived well. ” Health workers noted good teeth among Russian women, which is an important indicator of people's health.

Then the Germans were surprised by the general literacy of the Russians and its level. According to the general opinion in Germany, in Soviet Russia, people were largely illiterate, the level of education was low. The use of ostarbeiters showed that Russians have a good school. In all reports from the field, it was noted that illiterates make up a very small percentage. In the letter of one certified engineer who managed the enterprise in Ukraine, for example, it was reported that only three out of 1800 employees at his enterprise were illiterate (Reichenberg). Other reports cited similar facts: “According to many Germans, the current Soviet school education is much better than it was during the time of tsarism. A comparison of the skills of Russian and German agricultural workers often proves to be in favor of the Soviet ”(Stettin). “Of particular amazement was the widespread knowledge of the German language, which is studied even in rural junior high schools” (Frankfurt an der Oder).

The Germans were surprised by the intelligence and technical literacy of Russian workers. They were waiting for slaughtered slaves. In German propaganda, Soviet man appeared as a stupid slaughtered and exploited creature, the so-called. "Working robot." Now the Germans saw the opposite. Russian workers sent to military enterprises surprised the Germans with their technical literacy. The Russians surprised the Germans with their quick wits when they managed to make something worthwhile out of “all sorts of rubbish” (M. Zadornov, recalling the Russian thinker and creative energy, is immediately recalled). The German workers, who observed the level of technical skill of the Russians in production, believed that obviously not the best workers were in the Reich, the Soviet authorities removed the most skilled workers from large enterprises to the east of Russia.

Thus, it became clear why the Russians unexpectedly had so much modern weapons and technology. A large number of modern and good-quality weapons and equipment was evidence of the presence of a significant layer of qualified engineers and specialists. The Germans also noted a large number of students among Soviet workers. From this it is concluded that in Soviet Russia the level of education is not as low as it was believed.

In the field of morality, Russians in Soviet Russia retained the old patriarchal traditions characteristic of “old Russia”. This was a surprise to the Germans. Hitler pursued a policy aimed at creating a healthy society, family. German society was badly damaged in the 1920s, when poverty, "democratization", the onset of materialism hit the Germans hard. And in the Russian field of morality, everything was not just good, but even excellent.

So, in the reports it was noted: “Sexually, the Ostarbeiters, especially women, show healthy restraint ...” From Kiel: “In general, a Russian woman is sexually not at all in line with the ideas of German propaganda. Sexual debauchery is completely unknown to her. In various districts, the population says that during the general medical examination of the eastern workers, all the girls still had virginity established. ” Report from Breslau: “The Wolfen Film Factory reports that when conducting a physical examination at the enterprise, it was found that 90% of eastern workers aged 17 to 29 were chaste. According to various German representatives, it seems that the Russian man pays due attention to the Russian woman, which ultimately is also reflected in the moral aspects of life. ”

The Germans advocated that the Russians fought because of fear of the NKVD, Stalinist terror and exile to Siberia. In Berlin, they believed this when they made plans for a "lightning war." The USSR in their plans was a “colossus with feet of clay”. The outbreak of the war was to cause a mass uprising of peasants, workers, Cossacks and national minorities against the Bolsheviks. Subsequently, the Solzhenitsyn, Yakovlev, Gorbachev and Gaidar continued the propaganda of this myth created in the Gestapo.

German employers and workers were very surprised that there weren’t anyone among the migrant workers who would be punished in their own country. Further, to everyone's amazement, it was not found in large camps that relatives of the Ostarbeiters were forcibly exiled, arrested, or shot. I had to conclude that the terrorist methods of the GPU-NKVD did not have as much significance in the USSR as it seemed before.

The Germans began to understand why they were not able to crush the “slave” Soviet Union with one powerful blow. Why did the Red Army demonstrate high combat power, and the Soviet soldiers - high fighting spirit:

“Until today, perseverance in battle was explained by fear of the gun of the commissar and political instructor. Sometimes, complete indifference to life was interpreted on the basis of animal traits inherent in people in the east. However, the suspicion arises again and again that naked violence is not enough to cause actions in combat that are neglected by life. In various ways, they come to the conclusion that Bolshevism led to the emergence of a kind of fanatical faith. In the Soviet Union, perhaps many people, mainly the younger generation, are of the opinion that Stalin is a great politician. At the very least, Bolshevism, no matter what means, instilled in most of the Russian population inexorable perseverance. It was by our soldiers that it was established that such an organized manifestation of perseverance was never met during the First World War. It is likely that people in the east are very different from us on racial-national grounds, but behind the enemy’s fighting power there are still such qualities as a kind of love for the fatherland, a kind of courage and camaraderie, indifference to life, which the Japanese also show unusual but must be recognized. ”

Thus, the Stalinist leadership at the beginning of the war was able to lay the foundations of a new society. The societies of knowledge, ministry and creation. It was a physically, intellectually and morally healthy society. These were people who loved their socialist homeland, ready to lay down their lives for it. Many did so. Therefore, the pan-European hordes led by Hitler did not win, did not take Moscow, Leningrad and Stalingrad. And the Russian red banners were raised in Warsaw, Bucharest, Budapest, Vienna, Sofia, Königsberg, Berlin and Prague. 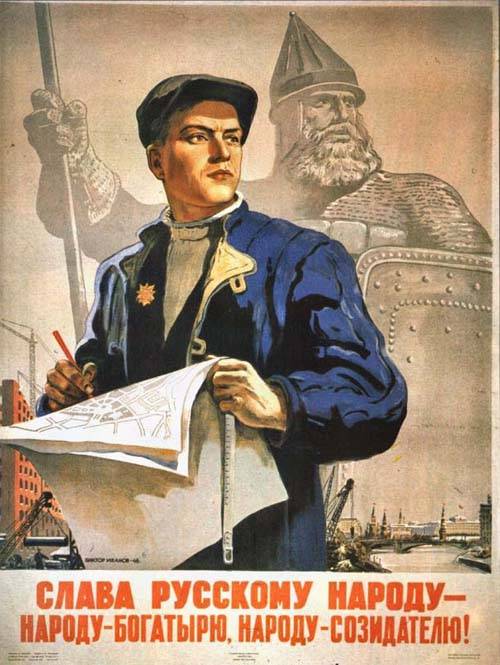 Soviet social poster "Glory to the Russian people." Created in 1947. The author of the poster is artist V. S. Ivanov. The poster depicts a young Soviet engineer on the background of the Russian hero

Author:
Alexander Samsonov
Photos used:
http://waralbum.ru/
Articles from this series:
The “Crusade” of the West against Russia

The “Crusade” of the West against Russia