A stable course Poroshenko. Zelensky did not live up to the expectations of society 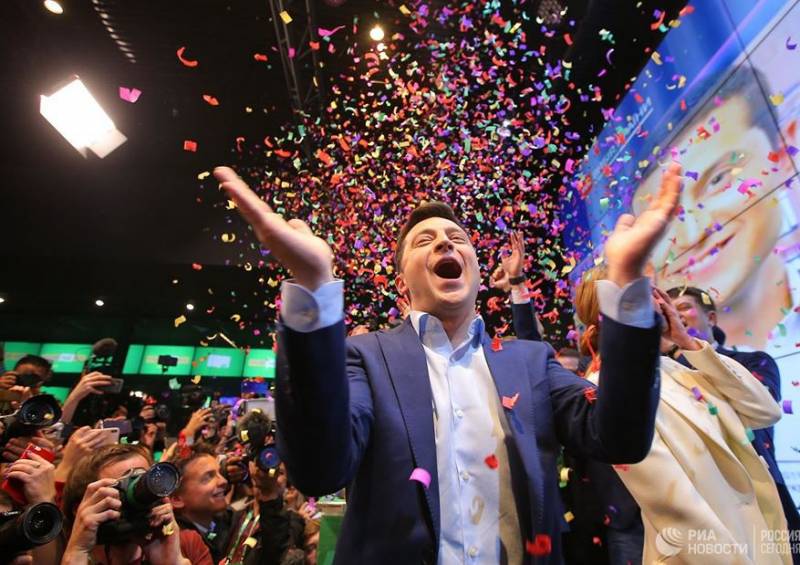 Since the beginning of 2019, Ukrainian society has been waiting for changes. Five years of Poroshenko’s rule provoked a persistent rejection of the methods imposed on him to solve painful problems; in the elections he was relieved of him and waited for changes from the new president. Zelensky came to power in the wake of unprecedented support from the population in the hope of establishing peace and improving living conditions.

Power under the control of Americans and oligarchs

Public expectations did not materialize, everyone was again deceived. The war did not end, and the economic situation became even worse. The Norman Four summit held in Paris only confirmed the invariability of the Ukrainian course set by the Poroshenko regime. Naturally, questions arise why, once again, when the ruling team changes, the state’s course does not change and it continues to degrade further.

This is due to both internal and external causes. Ukraine is not an independent subject of international relations and is under the strict control of the United States, which see it only as a mechanism for the realization of its interests in the world and pressure on its main geopolitical adversary, Russia. Inside Ukraine, power has long been under the control of local oligarchs, who, together with the Americans, use it in their interests.

Not a single government in Ukraine was and is not independent and acts within the framework of the corridor of opportunities set by the Americans; they are not at all interested in the fate of the people of Ukraine and the future of this state. Therefore, all actions of the Ukrainian authorities are considered by them only from the point of view of conformity or inconsistency with their interests, Zelensky, who ascended the throne with the help of Americans and oligarchs, is no exception.

With the seeming absolute power of Zelensky, he did not receive real power and, it seems, will not receive it anymore. He found himself in the position of a king who reigns, but does not rule. After becoming president of Poroshenko’s overwhelming anti-rating and unprecedented public support, he was unable to convert public support into the accumulation of resources and the creation of mechanisms to strengthen his power and fulfill his hopes. If he even wanted to go this way, he would hardly have been allowed to.

The Zelensky team was picked up by the Americans and the oligarchs, allowed to dissolve the parliament, create a constitutional majority and form all branches of power formally subordinate to him. The entire ruling elite Zelensky changed, but like-minded people were not allowed to create his own team. His team consisted of people only with pro-Western views, who defended the interests of various groups of influence, but were absolutely unprepared and not capable of leading the state. He could not and he was not allowed to create a vertical of power subordinate to himself, especially among the siloviki.

The Americans “put a watchman” over Zelensky put Russophobe Avakov, who with one hand intimidates the president with radicals and the possibility of organizing a coup, and with the other holds them back and does not allow serious actions that could threaten the Zelensky regime. As long as the Americans need him at their post, they will not allow his displacement.

Due to Zelensky’s fear of the radicals, he did not dare to curb and clean them up and allowed them to conduct unbridled Nazi propaganda against ending the war in the Donbass, arrange provocations on the contact line, publicly insult and even threaten the president’s life. Not supporting the interests of the majority, he flirts and makes concessions to this insignificant minority and realizes at the state level their will to the detriment of the majority of society.

The new president did not show the fighting qualities necessary in this post, he is not able to change the course of development of the state, since external and internal forces of influence will not allow him to do this. Zelensky’s power is incredibly weak and does not meet the existing demands of society. He became a public toy in the hands of the Americans and the oligarchs and he does not decide anything.

To match Zelensky's and Ukrainian society, under the influence of massive propaganda under Poroshenko, it was largely radicalized and not ready for reconciliation. Most consider ending the war through a military or political victory in the Donbass, which is even theoretically impossible. With such a radicalization of society, it is almost impossible to reach mutual understanding and end the confrontation.

During the reign of Zelensky, nothing has changed, the war continues to please the Americans, the integration of Donbass has been cornered and its prospects are not visible, the radicals continue to own the street, and relations with Russia have not been improved. All actions of Zelensky indicate that he will not become a strong president, and his fate is unenviable. As soon as he ceases to suit the United States and the oligarchs, he will quickly be replaced by another puppet.

Ukraine driven into a dead end

Now the second most important figure in Ukraine is the American financial tycoon Soros, under his pressure, the law on the sale of land in Ukraine is pushed in the interests of Western corporations and the mechanism of a financial pyramid with Ukrainian government bonds is launched. With a fabulously strengthened hryvnia, it will soon collapse, and Ukraine will face an unprecedented financial crisis, and the ingenious fraudster Soros will earn his next tens of billions of dollars.

An attempt by the Zelensky team to pass a law on the sale of land and bring Western capital into Ukraine in turbo mode crashed. Opposition Zelensky forces of all stripes united, organized and paid for "popular" protests, which frightened the power team, and it postponed the final decision by law to February.

The Paris summit did not teach Zelensky anything, he stubbornly continues to step on the Poroshenko rake and tries to continue his policy. After the summit, the situation with the Donbass came to a standstill, it became clear that Ukraine was not going to implement the Minsk agreements and did not want to include it in its composition, as this could lead to state disintegration processes. The main beneficiary of the war in the Donbass are the United States, which controls the entire ruling elite of Ukraine, and this means that the conflict will continue.

In such Ukraine, where Nazism is glorified and gangs of radicals act with impunity, they destroy their own history and forbidden to communicate in their native language, Donbass is clearly not the place. All this suggests that in today's Ukraine there are no conditions and opportunities to end the military conflict, and it will continue in the short term.

To stop the degradation of Ukraine and the war in the Donbass, the state and society must be reformatted and become different. Reevaluation of the vicious path and development strategy of Ukraine is needed. The country needs a strong state power and not a comprador, but a patriotic elite, capable of defending national interests. The foundations of the Nazi regime must be destroyed, and society must learn that through violence of one part of the population over another, the world in the country can never be established.