July 19 2012
6
The BA-11 armored vehicle was created as a means of supporting and reinforcing units of armored brigades armed with light and medium armored vehicles, as well as for providing combat support to cavalry and infantry. The base for its creation was the chassis of the three-axle truck ZIS-6, which was specially shortened. The BA-11 layout scheme completely repeated the BA-10 medium-armored car scheme. The armament and level of armor protection of the BA-11 surpassed all foreign models of heavy armored vehicles, and its diesel version didn’t have any analogues in the world at that time.

In 1936-37 years at the plant. Stalin (ZIS) were working to create a special shortened chassis ZIS-6K, equipped with an engine of increased power and an additional rear wheel. The assembly of the first prototype of the BA-11 heavy armored car was planned to be completed by 1 December 1938 of the year, but during these periods the VMS could not prepare the required chassis, the work on it was completed only by December 20. The design turned out to be successful, and the creation of the first BA-11 armored cars based on it began in winter. The following designers were responsible for the chassis of the armored car: B. M. Fitterman, V. N. Smolin and D. V. Salomatin; A. S. Eisenberg was responsible for the layout of the car. At the same time, at the Izhora plant, under the leadership of A. N. Baranov, work was being done on the creation of an armored hull for the future machine. For its time, it was quite perfect, according to specialists in the design of the BA-11, it was felt dynamic and powerful, it could be safely called elegant and complete.

The BA-11 layout scheme repeated all previous Soviet developments in this area — the front arrangement of the engine compartment, two control stations, and two leading rear axles. The body of the armored car was completely closed and was made by welding rolled rolled armor plates having a thickness of 10-13 mm. Bronelists were installed with rational angles. The bottom and roof of the armored car had a thickness of 4 and 8 mm, respectively. The crew of the car, which includes 4-x people, as well as the most important components and assemblies were well protected from armor-piercing bullets and fragments of small-caliber shells and mines. 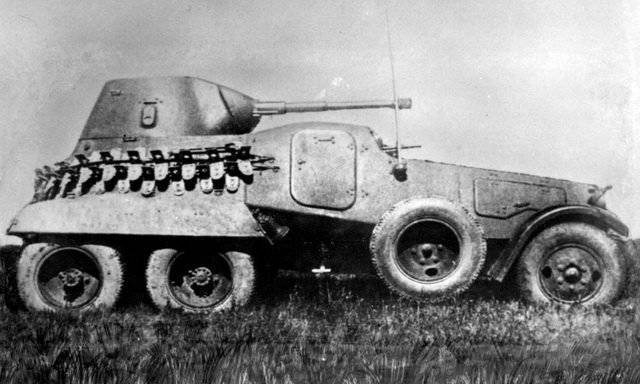 Behind the engine compartment was located the department of management, where the workplaces of the driver and car commander were located. The commander of a heavy armored car was located on the right side, where a DT machine gun of caliber 7,62-mm was installed in the frontal hull sheet, and the driver, respectively, was on the left. In addition to firing a machine gun, the commander provided communications using the duplex radio station 71-TK-3. Onboard the BA-11 case there was a hinged pin of a whip antenna, which could be laid along the front of the case and turned forward. For the intercom, the crew used the TPU-3 intercom. For observation of the terrain, PT-K bullet-resistant observation devices were used, which were equipped with viewing slots of the front window armor covers, as well as towers and side doors.

The doors of the armored car were irregular in shape and had very rounded corners, they were installed in the sides of the hull and were intended for the landing and disembarking of the crew. The doors were fastened to the inner hinges, which made it possible to rid the side surfaces of the BA-11 of unnecessary protruding elements. When developing the body of a heavy armored car, the creators moved away from the previous forms of the roof, which was characteristic of the BA-6 and BA-10. On the BA-11, the roof was still different in height, but at the same time, the rear part of the roof of the control section instead of the standard step received a strong bevel.

A low conical tower of circular rotation, which was made of 13-mm sheets of armor steel, was located above the roof of the fighting compartment in the rear part of the hull. The angles of inclination of its walls were 25 degrees. On top of the tower had a semicircular hatch, which was equipped with a hinged front cover. With the help of this hatch it was possible to get into an armored car or, on the contrary, leave it and also monitor the terrain. 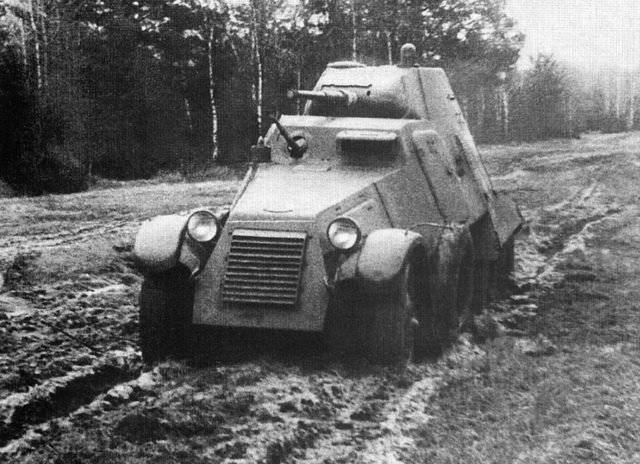 In the tower, the main armament of the armored car was located - 45-mm gun 20K, which was paired with a 7,62-mm machine gun DT. Gun ammunition consisted of 104 shots, machine guns - from 3087 cartridges in 49 disks. For firing, the gunner used a PT-1 periscope panoramic sight. 1932 of the year, as well as a telescopic sight TOP arr. 1930 of the year. The rotation of the tower was mechanical and had a manual drive.

One of the drawbacks of the BA-11 was unsuccessful placement of projectiles, which significantly reduced the rate of fire - up to 5 rounds per minute, while the BA-10 had this indicator equal to 10-12 shots. The shells were placed along both sides of the car above the recesses of the rear axles in the 4-x vertical racks (10 units) and in 2-X horizontal (32 units). The 42 machine-gun disks were located near the shell packings, another 7 was placed in the turret. In addition, the F-1 hand grenades in the number of 20 pieces were included in the ammunition of the vehicle. They were packed in 4 bags and attached to the backs of the crew members in the turret.

In the front, slightly extended engine compartment of the heavy armored car BA-11 there was an in-line six-cylinder carburetor liquid cooling engine ZIS-16, which was forced due to the rotational speed and improved filling of the cylinders, as well as increasing the compression ratio. Its power was 68,4 kW, taking into account the use of an aluminum block head, its power reached 72,8 kW or 99 hp. The reliability of the propulsion system was provided by a duplicate ignition (from the battery and magneto). In addition, there was a manual engine start mechanism. In order not to create unwanted radio interference, the plugs in the engine were shielded.

The ZIS-16 engine was associated with the transmission, which included: a four-speed gearbox with a multi-speed gearbox, two-plate dry friction clutch, differentials and drive shafts. The presence of a demultiplicator and reverse on the BA-11 gave 9 forward gears and 6 backward in total, while the reverse speed was 90% of the forward speed. The existing powerplant allowed an armored car weighing 8,13 tons to reach a maximum speed of 64 km / h on the highway. The stock of BA-11 fuel with full tanks was equal to 316 km.

The undercarriage of the armored car was non-wheel-drive (6x4), it differed in suspension on semi-elliptical springs and reinforced front axle. On the BA-11 used bullet-resistant tires type GK. The rear wheels of the armored car were gable and were in niches. From the sides, they were partially covered with flat armored screens, which closed behind the wings. For increased maneuverability, as in the BA-10, all-terrain overall caterpillars could be used. In the stowed position, these tracks were located around the rear of the hull. Heavy BA-11 armored car could overcome ditches up to 0,9 m wide, fords up to 0,65 deep and rises steeply up to 22 degrees. For driving in the dark on the brackets of the front wings could be installed headlights.

Significant disadvantages of BA-11 were the large weight and significant average specific ground pressure of 4,25 kg / cm² (for comparison, tank T-34 this indicator was only 0,64 kg / cm²). Also noted were the unreliable attachment of the hull to the frame and the inconvenient fueling of the armored car. If we talk about weapons, the BA-11 did not have any advantages over the average armored vehicles in service with the Red Army (BA-6 and BA-10). In total, 18 armored vehicles were produced before the war, and a version of the BA-11D armored car was also equipped with the ZIS-D-7 diesel engine (98 hp). The mass of the armored car BA-11D reached 8,65 tons, which negatively affected the maximum speed, which, according to the test results, amounted to 48,8 km / h. Be that as it may, the serial diesel version of this armored car has never been produced. 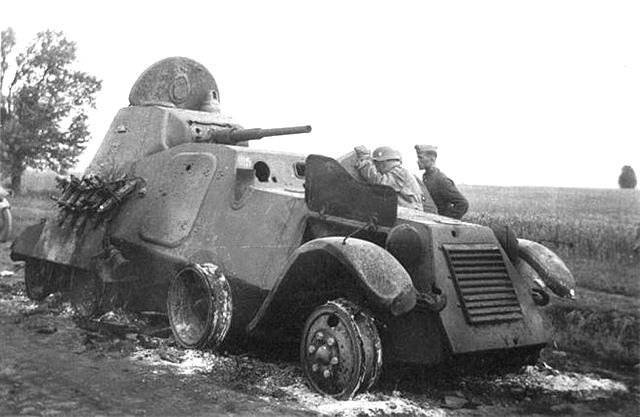 At the very beginning of the Great Patriotic War, heavy BA-11 armored vehicles were used on the Leningrad front. At the same time, the broad production of these armored vehicles did not work out. Izhora plant, where they were made, along with Leningrad, was surrounded by German troops. A total of 18 copies were made, all of them took part in the battles of the initial period of the war, some of them still remained in service in 1942. In the initial period of the war there was an attempt to establish the production of BA-11 at the Podolsk plant named after Baranova, but she was not crowned with success. In general, the BA-11 was not the worst armored car and even had a number of advantages over the T-26 light tank, having almost the same booking and firepower, it could develop at 2 times greater speed. At the same time, the experience of the Great Patriotic War clearly showed that the future belongs to all-wheel drive armored vehicles.