The “Crusade” of the West against Russia 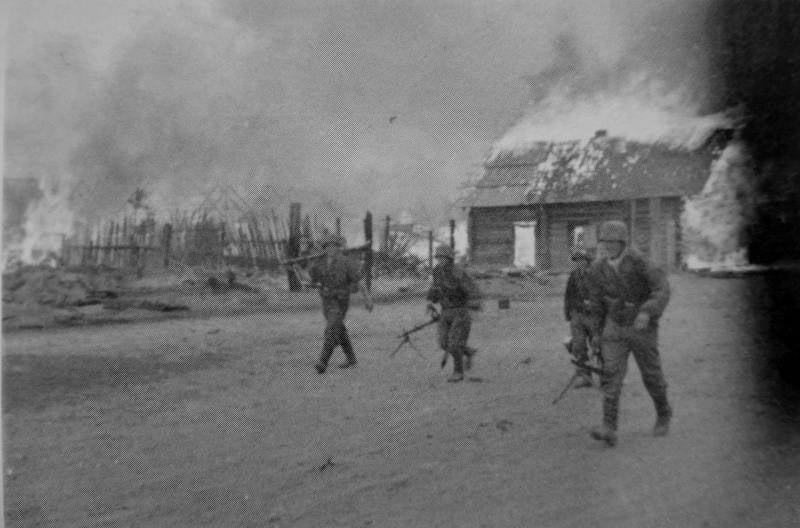 Machine gunners of the cavalry division of the SS are on the street of a set fire to a village in the occupied territory of the USSR. 1943

Germany provided weapons, equipment, ammunition and products all of Europe. Europe fought against us not only on the labor front. The Nazis created a real anti-Soviet international in the Wehrmacht and the SS troops.

"World Community" against the Soviet Union

World War II claimed the lives of 50 million people, more than half of this number were Soviet citizens who died. Our fathers, grandfathers and great-grandfathers suffered hardships incommensurable with the problems of other warring countries. At the same time, in the “world community” they already turned like that history The Second World War, which the vast majority, for example, the inhabitants of America, is confident that the United States played the main role in the war. And some believe that the Americans fought with the USSR.

In fact, such a huge loss of the USSR-Russia was caused by the fact that we fought alone most of the war, and the USA and England were waiting for someone to take. They could drag out their active participation in the war as much as possible, pretending to be at war on secondary and tertiary directions and fronts. In every possible way they propagated their participation in the war. It is also worth remembering that the Nazis conducted in the occupied Soviet regions (unlike us when we began to liberate Europe), the policy of "scorched earth", destroyed the "Russian subhuman." Not only prisoners of war, communists, commissars, but also the civilian population. Millions of people who lived in the most difficult conditions were driven into slave labor. The goal was the total destruction of most of the Russian population, the resettlement of part of the people beyond the Urals (which would lead to the death of most of the migrants, in the absence of means to establish life, supplies, food and clothing supplies, etc.), and the remnants were planned to be turned into slaves for the German colonists.

In post-Soviet Russia, the myth was created that Moscow “filled up the corpses” of the Germans, and therefore won. The USSR during the hostilities on the Eastern Front lost up to 11,5 million people (including prisoners). And the Third Reich allegedly only about 3 million soldiers and officers. Before the war, the population of the USSR was at least 193 million people, and the population of Germany and Austria attached to it was about 80 million. Therefore, it was automatically concluded how “cannibalistic” the Soviet regime was, the Stalin regime and how badly the Red Army fought .

In reality, the loss of Germany with satellites (including prisoners of war) is 8,6 million people. Not counting the losses of the police, collaborators, the militia of the Third Reich and other auxiliary units. The fact is that at that time the USSR fought not only with Germany (together with Austria), but also with almost the whole of Europe. The population of Europe, in addition to formally allied to us England and courageous Serbia, which continued to resist even after the occupation, was about 400 million people.

During the Great Patriotic War, 34476,7 thousand people were called up for the Armed Forces, that is 17,8% of the country's population. And the Third Reich mobilized up to 21% of its population. That is, it seems that the German Empire was more tense in the war than the Union. But in the Soviet troops there was a large percentage of women who served both voluntarily and on conscription. Signalers, nurses, military doctors, snipers, anti-aircraft gunners, airmen, etc. There were a lot of female units and units. In the most difficult time, the State Defense Committee (GKO) even decided to create female rifle units in which men would only be loading heavy artillery pieces (though this decision was only left on paper). And in Germany, even during the period of retreat and defeat, women did not serve in the army. Moreover, they were few even in production.

What's the matter? There were few men in the USSR? The fact is that not only soldiers are needed to wage a war, but also weapons, equipment, ammunition, various military materials, supplies, fuel, and a host of other things. That is, in production, especially heavy, men are needed. Their teenagers and women cannot be completely replaced. Therefore, the Soviet authorities were forced to send women to the front. But Hitler did not have such a problem. Near Berlin was the then "European Union". Germany was provided with weapons, equipment, ammunition and products throughout Europe. France gave Germany a whole tank army, the French produced for the Germans a large number of equipment, including vehicles. Czechoslovakia also handed over to the Germans intact all arsenals, armored forces, but also built a fleet of armored personnel carriers, throughout the war regularly supplied tanks, aircraft, guns, small arms and ammunition. The Poles built planes, supplied food, produced synthetic gasoline and rubber. Switzerland provided loans, goods and military goods transit services, trade in goods stolen all over Europe, and storage of Nazi assets. Sweden supplied iron ore, components for machinery, Norway - seafood, etc. As a result, everyone worked for the Reich. 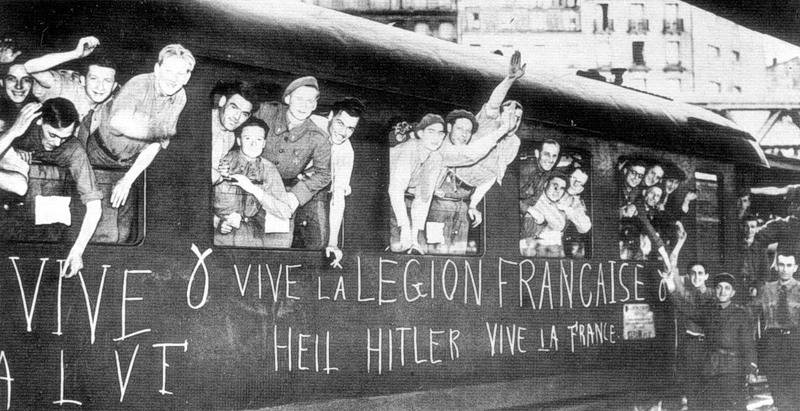 French volunteers of the Legion of French Volunteers (LFV) before departure at the Gare de l'Est Paris train station in September 1941. The Legion arrived in November 1941 as "Infantry Regiment No. 638" in the Wehrmacht in the Moscow direction 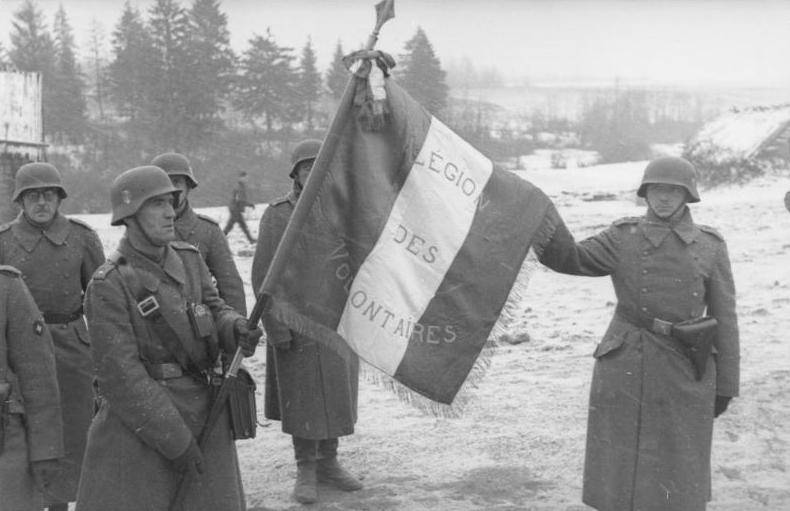 French volunteers with the banner of the legion. USSR, November 1941 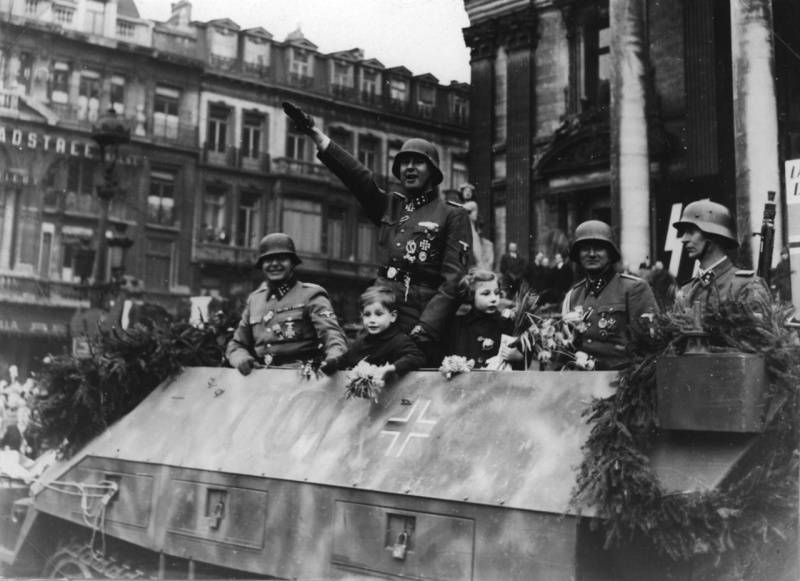 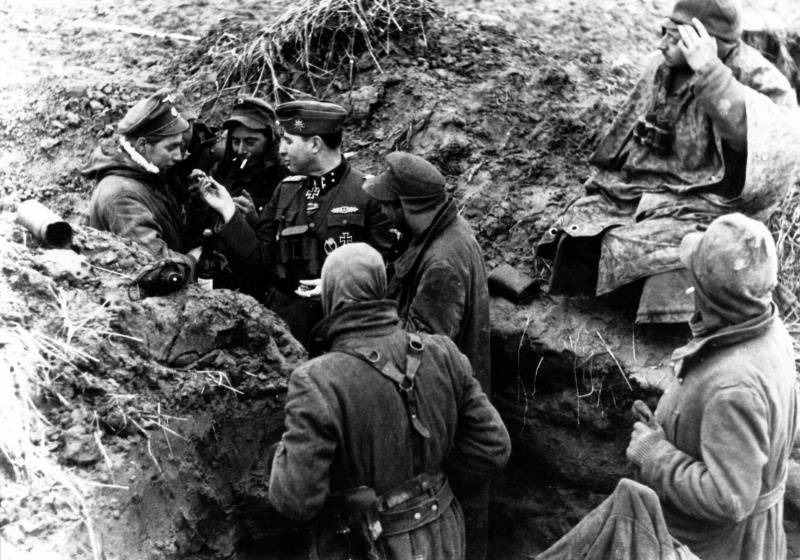 The commander of the 28th volunteer tank and grenadier division of the SS Wallonia Leon Degrell distributes cigarettes to his soldiers. Pomerania, end of February 1945

The Crusade of Europe

And Europe fought against us not only on the labor front. The Nazis created a real anti-Soviet international in the Wehrmacht and the SS troops. Up to 2 million European volunteers fought for Hitler against the USSR. Only the elite troops of Nazi Germany, the SS troops, accepted 400 thousand volunteers from other countries. The Germans formed 59 divisions, 23 brigades and several national regiments and legions from volunteers. These are such divisions as "Valonia", "Galicia", "Bohemia and Moravia", "Viking", "Denemark", "Gembez", "Langemark", "Nordland", "Netherlands", "Charlemagne" and others. Europeans served as volunteers not only in national but also in German divisions.

Both the USSR and the Russian Federation teach that the French were our allies in World War II. Partisans and underground fighters, de Gaulle fighters and the legendary Normandie-Niemen air regiment. Of course, do not belittle the brave men of Normandy-Niemen and Fighting France. However, much more French fought on the side of Hitler. Among them were many volunteers. Some were called up to the Wehrmacht, others served in the Legion of French volunteers (formed in the summer of 1941). The Legion arrived in November 1941 on the Russian Front as Infantry Regiment No. 638 and fought at Borodino, then was used against the partisans. In 1944, the Legion became part of the 33rd SS division Charlemagne. The exact number of French soldiers who fought in the Wehrmacht is not known. More than 23 thousand French citizens appeared in Soviet captivity. Some of the French who fought for Hitler were captured by the Anglo-Americans, while others simply returned home.

10 days after the outbreak of war with the USSR, the head (leader) of the Independent State of Croatia Ante Pavelic urged the Croats to join the troops, which were to fight against the Soviet Union. The Legion consisted of three infantry battalions. One of the battalions consisted entirely of Muslims from Bosnia-Herzegovina. Later, the legion, which the Germans called the “369th Croatian reinforced infantry regiment,” was reinforced by an artillery division. The Croats fought in Ukraine, near Stalingrad.

A significant number of Poles fought on the side of Hitler. On the Polish lands that became part of the Third Reich, they were called up to the Wehrmacht. Only from the territory of the Polish part of Upper Silesia more than 100 thousand people were mobilized into the German army. In some Wehrmacht infantry divisions, Poles comprised between 12% and 30% and even 45% of the personnel. As a result, by the end of the war, over 60 thousand Poles who fought on the side of Hitler were in Soviet captivity. And this is not complete data. So, about 600 thousand prisoners from the army of the Reich and its satellites, after an appropriate check, were released directly on the fronts. Mostly they were persons of non-German nationality: Poles, Czechs, Slovaks, Bulgarians, Romanians, Moldavians, etc.

The Germans also actively formed collaborationist units. There was also the Vlasov Russian Liberation Army (ROA), there were two battalions Nachtigal and Roland, consisting of Ukrainian nationalists and created by the Abwehr for sabotage operations, and police units. Baltic volunteers who served in the German ground forces, and in the Luftwaffe, and in the SS, and are notorious for their punitive operations. Entire divisions were formed in the Baltic states: 15th SS Waffen-Grenadier Division (1st Latvian), 19th SS Waffen-Grenadier Division (2nd Latvian), 20th SS Waffen-Grenadier Division (1st Estonian) . By 1944, 22 police battalions of the schutzmannshaft (noise, “security teams”) were formed in Lithuania. In total, in 1941-1944. 20 thousand people served in various Lithuanian police units. In February 1944, the Lithuanians formed the Local Lithuanian squad (12 thousand people), which received the status of an ally of the Wehrmacht. On March 1, 1944, general mobilization in the Wehrmacht was declared in Lithuania. Construction units were formed from Lithuanians (3 thousand people). Another 13 police battalions were formed. At the beginning of 1945, on the Wehrmacht side, about 37 thousand people participated in various Lithuanian battalions and services in battles against the Red Army. Lithuanian punishers took part in the destruction of 229 thousand Soviet prisoners of war, 220 thousand Jews, as well as many thousands of civilians, partisans and soldiers in other regions of the USSR, Poland and Yugoslavia on the territory of Lithuania.

Among the volunteers who became full-fledged soldiers of the Wehrmacht were representatives of Asian and Caucasian peoples of the USSR. During the first half of 1942, first 4, and then 6 Asian-Caucasian legions were fully integrated into the Wehrmacht. They received the same status as the European legions. Turkestan, Muslim-Caucasian (then Azerbaijan), Georgian, Armenian, North Caucasian (including representatives of 30 different peoples of the North Caucasus), Volga-Tatar (Idel-Ural) legions. At the end of 1943, the command of the eastern legions in Poland was disbanded. This command formed 14 Turkestan, 8 Azerbaijani, 8 Georgian, 9 Armenian, 7 North Caucasus and 7 Volga-Tatar battalions. A total of 53 battalions were formed with a total number of over 50 thousand people, who were sent first to the Eastern Front, and then to Western Europe.

There were also official allies of Hitler, whose armies shoulder to shoulder with the Germans robbed and burned the Soviet Union. Italians, Romanians, Hungarians, Finns, Croats, Slovaks. Bulgarians burned rebellious Serbia. And officially neutral Spain sent the “Blue Division”. All this European bastard climbed into our lands in the hope of an easy walk and great prey. 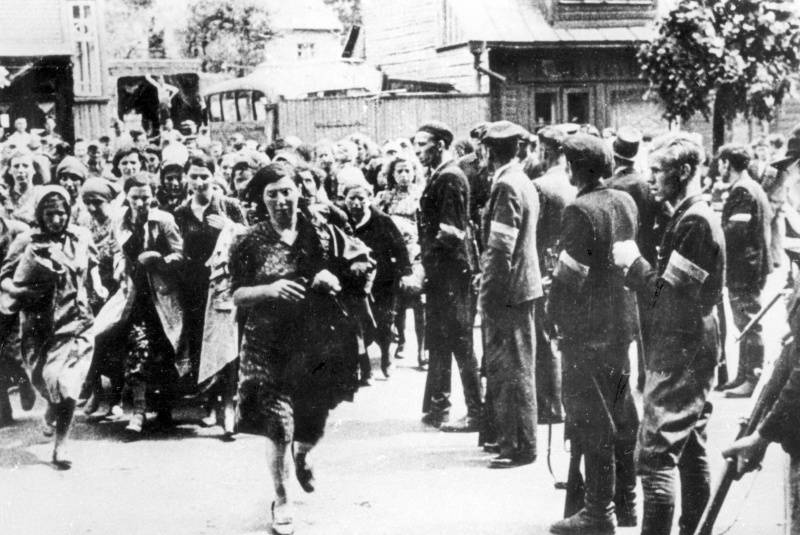 Lithuanian police escorted Jews to the IX fort of the Coven Fortress. The fort was used as a prison and the site of mass executions of the Jewish population. June 1941 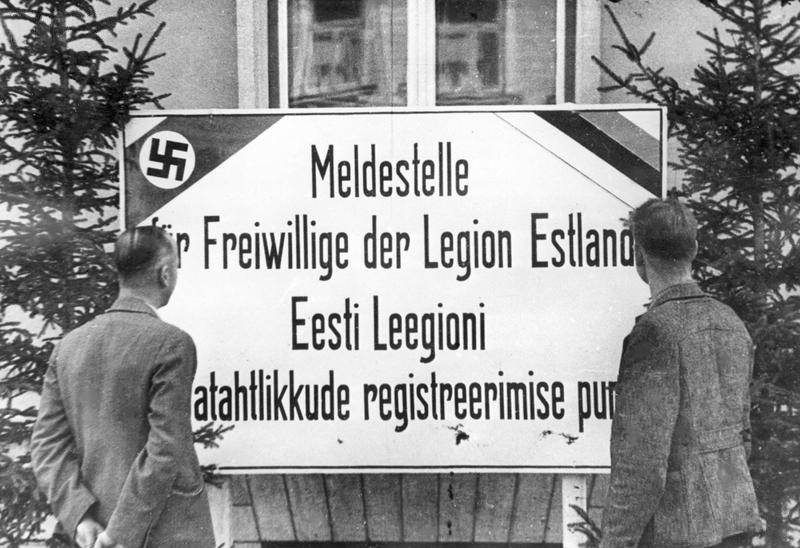 Announcement “Recruiting point for volunteers of the Estonian Legion”, 1942 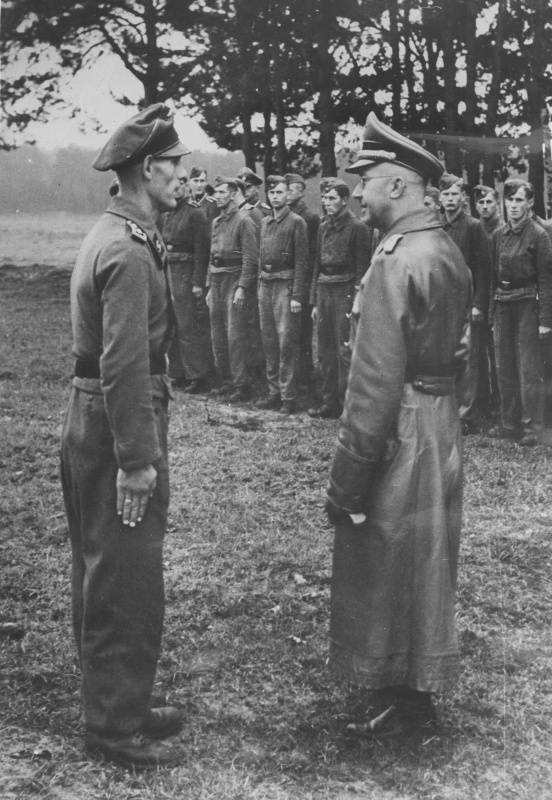 We are in Yandex Zen
Chernobyl notebook. Part of 3
Myths of the Great Patriotic. Papier mache helmet
217 comments
Information
Dear reader, to leave comments on the publication, you must to register.