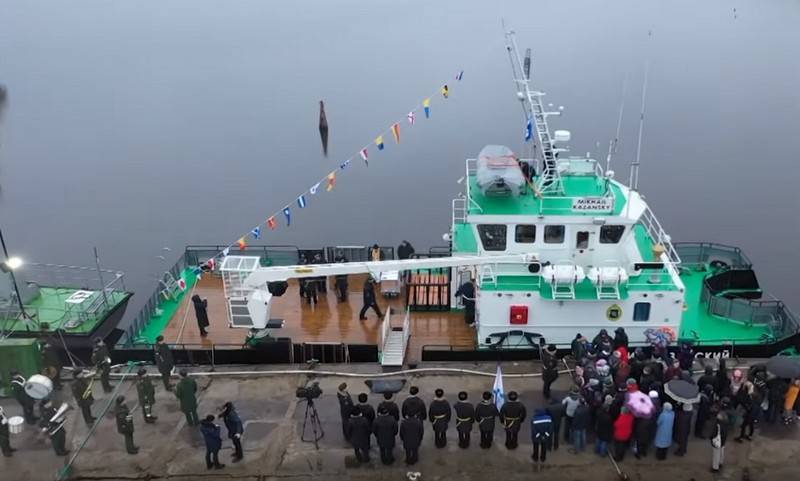 The main large hydrographic catamaran boat of project 23379G Mikhail Kazansky became part of the Baltic fleet. The ceremony of raising the flag of St. Andrew was held in Vyborg. This was reported by the press service of ZVO.

Today, in Vyborg, during a ceremony, the command of the Leningrad Naval Base congratulated the crew, and the St. Andrew flag was hoisted on a hydrographic boat
the report said.

The large hydrographic boat of project 23379G "Mikhail Kazansky" is the lead in a series of three boats, the construction of which is carried out by KAMPO in Orekhovo-Zuevo. The boat was laid down at the KAMPO shipyard on August 24, 2018, and at the beginning of August this year, ready-made BGK modules were transferred to Vyborg for final assembly. Launched on August 29, 2019.

The name of the ship was given in honor of an outstanding hydrograph who took part in the laying of the "Road of Life" on Ladoga, the head of the ice service of the Baltic Fleet, engineer-colonel Mikhail Kazansky.


Vessels of the 23370G project are designed for pilotage and hydrographic work, setting (shooting) and servicing floating warning signs, delivery of maintenance personnel, repair crews, food, fuel and other cargo to coastal facilities, including those located on an unequipped coast. Boats have the ability to quickly measure depths with the use of an echo sounder in places where floating signs are placed.

The modular hydrographic boats of the catamaran type of the 23370Г project are the new version of the multipurpose vessels of the 23370М project. The displacement of the boat is about 140 tons. Boats are built in the interests of the Navigation and Oceanography Directorate of the Ministry of Defense of the Russian Federation for use by the hydrographic service of the Russian Navy.
Ctrl Enter

We are in Yandex Zen
In Vyborg they launched the 23370G project defense company for the Baltic Fleet
The second BGN of the 23370G project was laid down at the KAMPO shipyard in Orekhovo-Zuevo
34 comments
Information
Dear reader, to leave comments on the publication, you must to register.