Big Dumb Booster: a simple but complex rocket for NASA 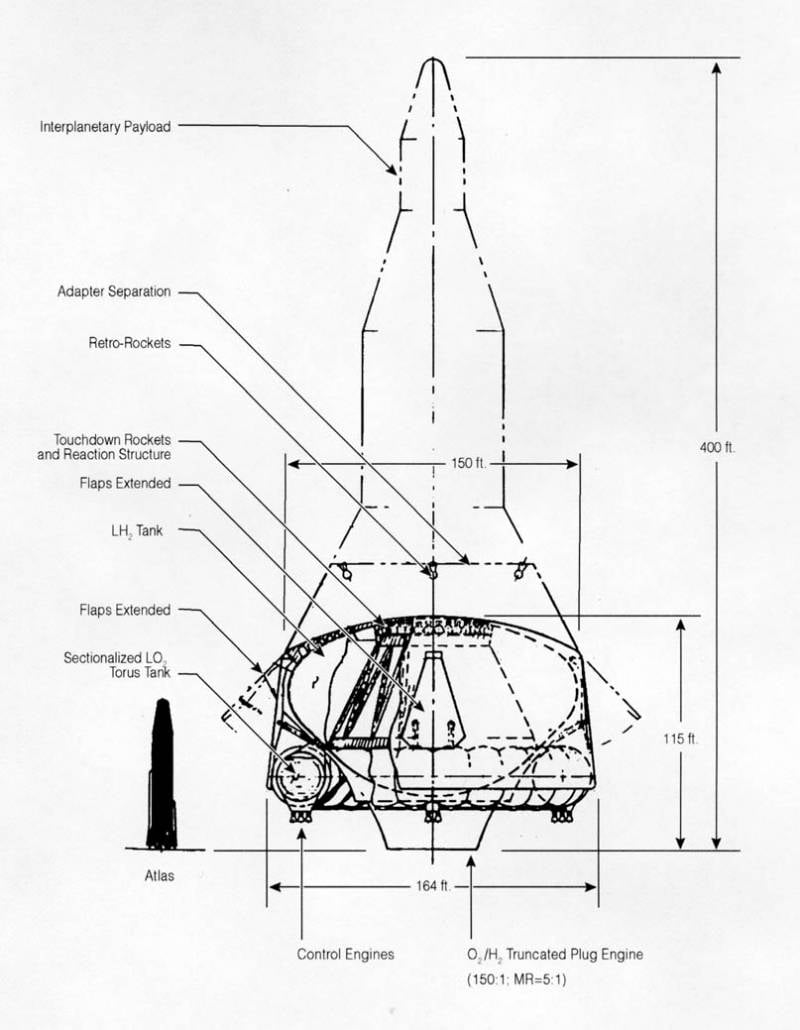 Schematic of the NESUX launch vehicle from General Dynamics. To the left for comparison - a real Atlas rocket

In the early years of the American space program, the main task was to improve the characteristics of rocket and space systems. It quickly became clear that the increase in technical parameters was associated with significant difficulties and should lead to an increase in the cost of launches. An interesting solution to this problem was proposed as a Big Dumb Booster concept.

Projects of space rocket systems of that time were of high technical complexity. To obtain better characteristics, new materials were developed and introduced, promising models of equipment of all classes were created, engines were developed, etc. All this led to an increase in the cost of the development and production of missiles.

Calculations showed that, while maintaining such approaches, the cost of cargo withdrawal will remain at least at the same level or even begin to grow. To maintain or improve economic performance, radically new solutions were required at the concept level. The first studies in this direction began in the very late fifties and soon yielded real results.

NASA, in collaboration with a number of private aerospace companies, has been developing several new concepts for promising systems. One of them was called Big Dumb Booster - "Big stupid (or primitive) booster." 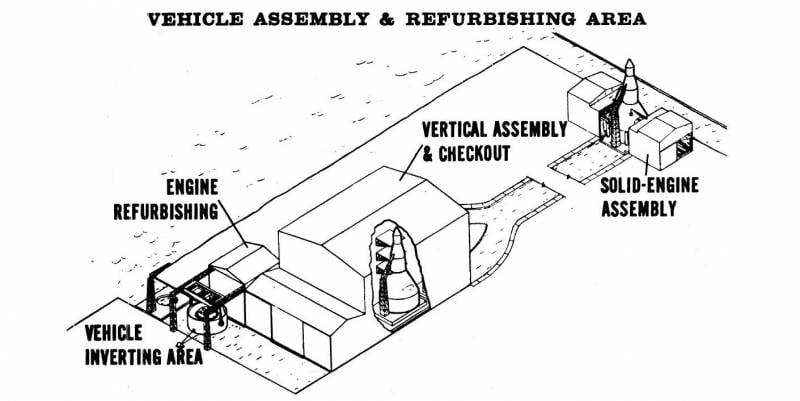 A "simple" launch complex for a "cheap" NEXUS rocket
The essence of this concept was to simplify the design of the launch vehicle and its individual components. For this, only well-developed materials and technologies should be used, abandoning the development of new ones. It was also required to simplify the design of the rocket itself and its components. At the same time, it was necessary to increase the carrier, increasing its payload.

According to the first estimates, this approach to design and production allowed BDB to provide a sharp reduction in the cost of launches. Compared with existing and promising launch vehicles of the “traditional” look, the new models were much more economical. An increase in production rates was also expected.

In this way, the BDB booster could be quickly built and prepared for launch, and then send a larger load into orbit. Preparation and launch would be of reasonable cost. All this could be a good incentive for the further development of astronautics, however, at first it was necessary to develop and implement fundamentally new projects.

In the development of the BDB concept, several organizations involved in the development of rocket and space technology participated. They proposed and brought to varying degrees of readiness a number of launch vehicle projects. The proposed samples significantly differed from each other in their appearance or characteristics, but at the same time had a number of common features.

To simplify and reduce the cost of the rocket, it was proposed to build not from light alloys, but from accessible and well-developed steels. First of all, high-strength and viscous grades from the category of maraging steels were considered. Such materials made it possible to build larger missiles with the required strength parameters and reasonable cost. In addition, steel structures could be ordered to a wide range of enterprises, including from different industries - from aviation to shipbuilding.

Aerojet Sea Dragon rocket diagram
A large missile with a heavy load needed a powerful propulsion system, but such a product in itself was extremely expensive and complex. It was proposed to solve this problem due to the most efficient types of fuel, as well as by changing the design of the engine. One of the main ideas in this area was the rejection of turbopump units - one of the most complex components of rocket engines. It was planned to supply fuel and an oxidizing agent due to the increased pressure in the tanks. This solution alone provided a noticeable reduction in cost.

The proposed materials and alloys ensured the construction of large structures with corresponding potential. The payload of a Big Dumb Booster missile could be brought to a level of 400-500 tons or more. With the increase in the size of the rocket, the proportion of dry weight in the starting weight decreased, which promised new successes and additional savings.

In the future, missiles or their elements could be made reusable, which was facilitated by the use of durable steels. Due to this, it was planned to obtain an additional reduction in the cost of launch.

However, to obtain real results, it was necessary to complete research work, and then launch experimental design work. With all the apparent simplicity, these stages could stretch for many years and require substantial funding. Nevertheless, space industry enterprises took this risk and began designing promising “primitive” launch vehicles.

The first projects of a new kind appeared in 1962 and were evaluated by NASA experts. These BDB variants were based on common ideas, but used them differently. In particular, there were differences even in the starting method.

Sea Dragon rocket layout
A real record holder could be the NEXUS rocket developed by General Dynamics. It was a single-stage launch vehicle with a height of 122 m and a maximum diameter of 45,7 m with stabilizers of a range of 50 m. The estimated launch weight reached 21,8 thousand tons, the payload to reach low Earth orbit - up to 900 tons. For other orbits, the carrying capacity was half as much.

The NEXUS rocket was supposed to put the load into orbit, and then land in the oceans using parachutes and solid-propellant landing engines. After service, such a BDB could perform a new flight.

In the same year, the Sea Dragon project from Aerojet appeared. He offered a super-heavy launch vehicle for a sea launch, and she did not need any separate launch facilities. In addition, it was planned to involve shipbuilding enterprises in the production of such missiles that possess the necessary - not the most complicated - technologies for assembling metal structures.

The Sea Dragon was built on a two-stage scheme with simplified liquid propellant rocket engines on both. The length of the rocket reached 150 m, diameter - 23 m. Mass - approx. 10 thousand tons, payload - 550 tons for DOE. At the first stage, a kerosene-oxygen engine with a thrust of 36 million kgf was provided. Instead of a ground-based launch complex, a more compact system was proposed. It was made in the form of a large-sized ballast tank with the necessary devices attached to the bottom of the first stage. 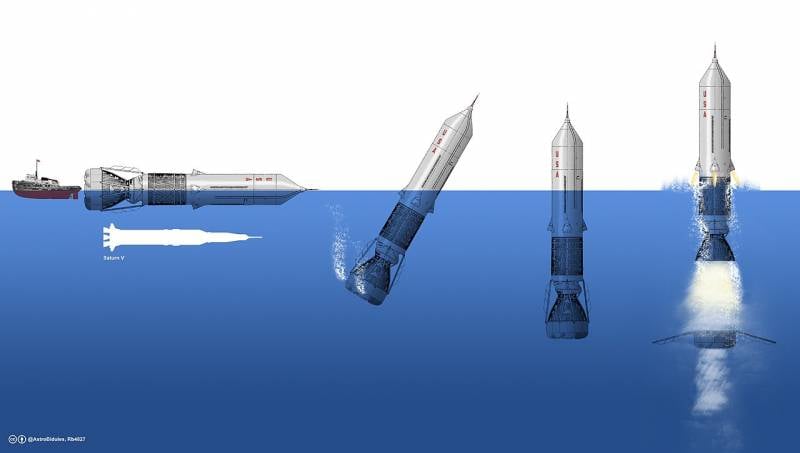 The pre-launch process for the Sea Dragon type of BDB
As conceived by the designers, the Sea Dragon rocket was to be made by a shipyard from the usual "ship" materials. Then, using a tugboat, the product in a horizontal position should be towed to the launch site. The launch system provided the rocket from horizontal to vertical with a draft of about half the body. Then the “Dragon” could start the engines and take off. The return of the steps was carried out using parachutes with landing on water.

Projects of superheavy launch vehicles Big Dumb Booster were of great interest in the context of the further development of space exploration. However, their implementation was associated with a number of characteristic difficulties, without overcoming of which it was impossible to obtain the desired results. A sober assessment of technical proposals and projects led to the closure of the entire direction.

Further elaboration of the proposed projects from Aeroget, General Dynamics and other companies was a very difficult task. To create a "cheap" rocket required a lot of money to develop projects and adapt existing technologies for space applications. At the same time, the resulting missiles in the foreseeable future were not of any interest: there was simply no payload of hundreds of tons and was not expected in the coming years.

NASA considered it inappropriate to spend time, money and effort on projects without real benefit. By the mid-sixties, all work on the topic of BDB had ceased. Some of the participants in these works tried to remake projects for other tasks, but even in this case they did not receive a continuation. To the delight of taxpayers, work on the BDB ceased in the early stages, and did not spend a lot of money on the dubious program.

As the further development of the American space program showed, heavy and superheavy launch vehicles did find application, but systems with a carrying capacity of hundreds of tons were redundant, as well as overly complex and expensive, despite the initial plans. The development of astronautics continued without the "Big primitive rocket" - and showed the desired results.

We are in Yandex Zen
Reusable space: promising projects of US spacecraft
Rocket Fuel Saga
18 comments
Information
Dear reader, to leave comments on the publication, you must to register.