Nuclear offshore. Are Ukrainian NPPs up for sale? 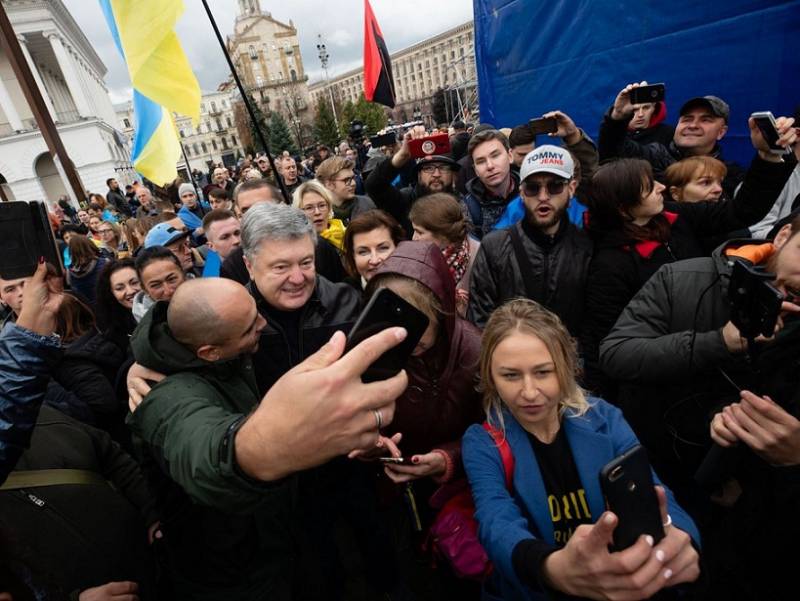 In Kiev, under the windows of the Verkhovna Rada, a gambling scuffle again took place for the right to be called a "rich patriot." “Suddenly and unexpectedly” the agitated crowd curses the nominally new power in betraying the interests of Ukraine and in the sale of land. The fact that this event was exclusively custom-made, there is no doubt even clinical optimists. This is clear, if only for the reason that, in addition to land, hundreds and hundreds of enterprises, including those generating profit, will go under the hammer. However, this fact is in the shadow of media drilling.


At the same time, the sale of some enterprises preparing for privatization threatens to immerse Ukrainians in the darkness of the Middle Ages. And this is by no means an exaggeration. Indeed, in the package for sale are Ternopoleloblenergo, Cherkasyoblenergo, Zaporizhiaoblenergo, Odessaoblenergo, Kharkivoblenergo, Khmelnitskoblenergo, Turboatom and even Energoatom, which manages the entire Soviet atomic legacy. And, most interestingly, the ringing of bells on the sale from that side was heard for a long time.

Poroshenko and the first steps

2014 year. Ukraine is in drug euphoria from the solemn “Maidan” and at the same time it is agonizing from the Crimea, which has gone forever and has taken the defense of Donbass. In general, the average person is extremely busy with the picture on the TV screen and periodic patriotic chants, which are heard outside the window.

Taking advantage of an extremely convenient situation, the new comprador power, led by Petro Poroshenko, began a new round of privatization. "New" for the reason that the sweeping privatization spit before the "Maidan" went well on state assets. They started famously, however, in this they were not alone. Continued in the same vein.

On August 22, 2014, the Cabinet of Ministers of Ukraine introduced bill No. 4541a to BP. This document provided for the partial privatization of thousands of state enterprises in Ukraine. These enterprises included Turboatom (production of turbines for nuclear power plants, thermal power plants, hydroelectric power stations, etc.), Lviv Armored Plant, Kharkov Armored Plant, and even the Ukrainian Energoatom, i.e. operator of all nuclear power plants in the country, except for Chernobyl. However, the last tragic nuclear power plant, oddly enough, was also put up for auction, as it were, in a separate lot. Privatization involved the redemption by private individuals of not more than 40% of shares minus one share.

The piquancy of the situation was that Poroshenko’s cabinet of ministers, ready to open the sale of such iconic and once-advanced enterprises, stood for preserving in state orbit such companies as Naftogaz, Ukrtransgaz, Ukrgazvydobuvannya and Ukrspetstransgaz. Apparently, gas for the new authorities is something like a totem fetish ...

But it was the first ball, trial. In 2015, part of the enterprises subject to privatization was nevertheless deleted from the list, including Energoatom. But so simply the leaders of the "Maidan" did not want to retreat. Not for the same reason they made a "revolution". 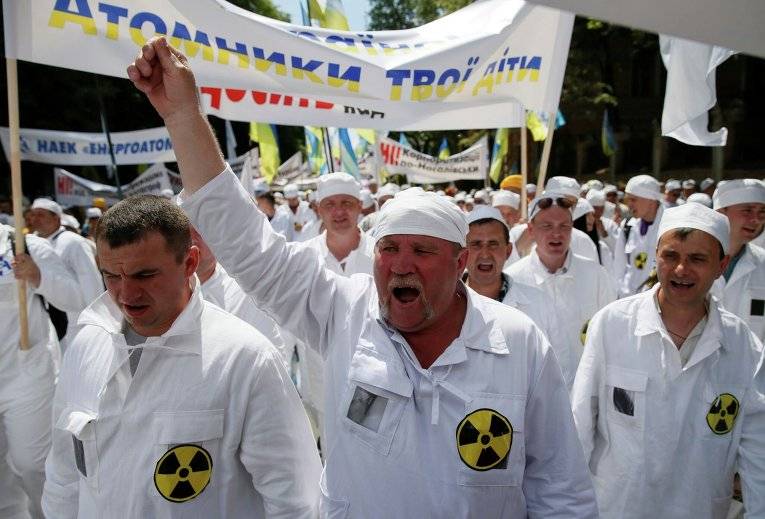 Already in 2016, they began to discuss the issue of corporatization of Energoatom, i.e. turning it into a joint stock company. At the same time, the head of Energoatom Yuriy Nedashkovsky played a significant role in lobbying the first step towards the privatization of Ukraine’s nuclear industry. He argued that the industry, falling apart before our eyes, instantly overwhelmed by a wave of investment. Yuri left his post only in November of this year, i.e. already under Zelensky.

On the eve of the coming of the "Ze"

At the end of 2018, when the rating of Poroshenko catastrophically dived to the bottom, the restless Cabinet of Ministers again published a list of enterprises that needed to be immediately put on the market. The list was impressive: Zaporizhiaoblenergo, Ternopolpoblenergo, Kharkivoblenergo, Khmelnitskoblenergo, Nikolaevoblenergo, Kherson TPP, Dneprovskaya TPP, United Mining Engineering Company Minenergougol, etc.

And again, Turboatom was on the list for sale. At the same time, the long-suffering Turboatom, the former Kharkov Turbogenerator Plant, does not hang a weight on the neck of the state, but generates income even in a state of economic and industrial crisis in Ukraine. Where does such a manic desire of Ukrainian officials to get rid of Turboatom come from? The question is, indeed, a rhetorical one.

But have you really forgotten about Energoatom? Not at all. The pace of corporatization has only been increased. The number of lobbyists for this idea has increased. At the same time at the highest level. The Energy and Coal Industry Minister Vladimir Demchishin himself spoke in favor of privatizing Energoatom with all his hands. His successor, Igor Nasalik, continued the course towards corporatization. Moreover, a full audit of Energoatom assets has already been conducted. And the old rhetoric about the inviolability of the state block of shares of 60% was quickly changed. And now we are talking about a package in the best case of 50% plus one share.

Meet the new boss, the same as the old

And Zelensky came to power. Using the groundless hopes of the layman, Vladimir Alexandrovich switched to a “turbo mode” for the implementation of all the same software installations of Peter Alekseevich. And, of course, in the "turbo mode" the question began to be solved not only about the corporatization of Energoatom, but also about creating the optimal environment for attracting "investors", or rather, potential buyers. 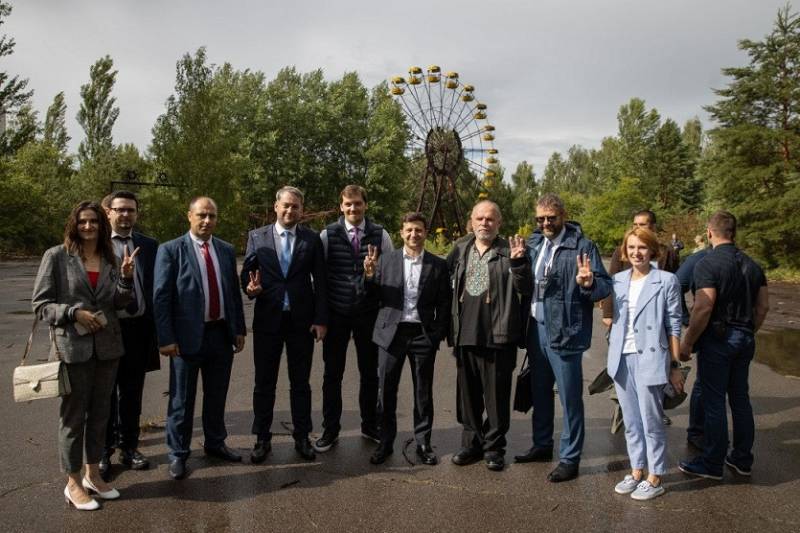 Zelensky in Pripyat on the background of the infamous Ferris wheel
Already in November of this year, President of Ukraine Zelensky signed Decree No. 837/2019. It provides for corporatization by December 31, 2020, i.e. the issue is resolved. Moreover, attempts to attract “investors” give a special piquancy to the situation. As you know, the nuclear industry of Ukraine is in a frightening state. The number of emergencies is increasing year by year, the ranks of professional personnel are thinning, and politics is destructively interfering in the process.

So who would venture to invest hundreds of millions of dollars in such an economy? Moreover, against the background of the fact that the debts of energy consumers losing their solvency are growing by leaps and bounds.

Given the situation, a benign investor turns into a hardened businessman who will enrich himself with all his strength and at the same time bankrupt the country's nuclear industry in order to transfer Euro-oriented Ukraine to purchase electricity in the West. The main thing is that the corporatization of the atom opens such a wide window of opportunity that it is scary to imagine in Ukrainian realities. Is there even the slightest guarantee that Ukraine, being weapons offshore, does not turn into an offshore nuclear with all the ensuing consequences?

There is no answer to all these questions. At the moment, there is not even a clear answer to the question of which particular block of shares may go to private individuals.

We are in Yandex Zen
A great interview with Sergey Lavrov: about Ukraine, Obama and Iran
What you didn't want to know about England
54 comments
Information
Dear reader, to leave comments on the publication, you must to register.