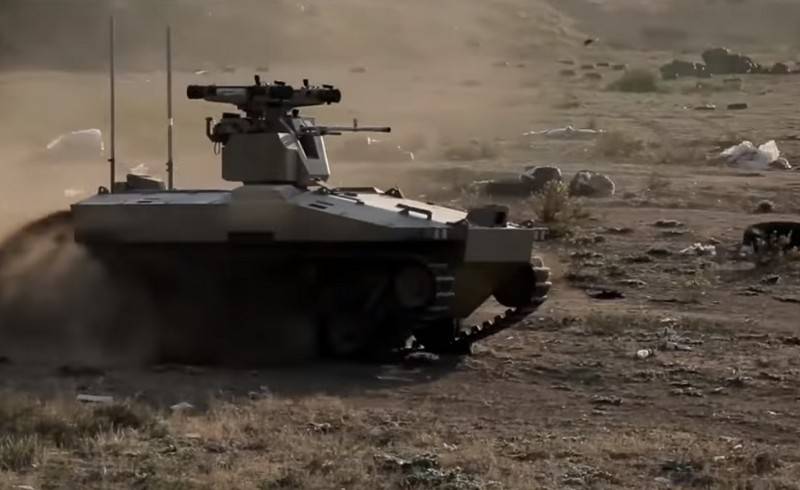 Tests of the robotic complex "Companion"

Russian specialists began work on the creation of heavy and middle class robotic systems in the interests of the Russian armed forces. This was announced by the Commander-in-Chief of the Ground Forces Army General Oleg Salyukov at the end of the extended board of the Ministry of Defense, held on Tuesday.

According to the general, the creation of the heavy and middle class robotic systems "Sturm" and "Companion" is at the stage of experimental design work. OCD agreed with the Ministry of Defense, previously companies involved in this topic conducted work on an initiative basis.

At the moment, experimental design work on the creation of robotic systems (RTK) of heavy and middle class "Sturm" and "Companion"
- said Salyukov.

Since the projects are new, there is little information about them in the public domain. It is known that the Sturm project is the development of an automated system of robotic weapons systems and military equipment. This system should ensure the coordinated use of the robotic systems included in it when performing combat missions by ground forces units.

On the basis of the Companion project, a whole family of robots will be created in the interests of the Russian Ministry of Defense.

The introduction of military RTKs into the troops for military purposes, as well as the development of the theory of their combat employment, undoubtedly contributes to a change in the order and methods of solving tactical tasks in combat by combined arms formations
- said the commander in chief.
Ctrl Enter
Noticed oshЫbku Highlight text and press. Ctrl + Enter
We are
Reports from the militia of New Russia for 27-28 September 2014 of the yearYuri Drozdov: Russia prepared the role of the sacrificial calf
Military Reviewin Yandex News
Military Reviewin Google News
67 comments
Information
Dear reader, to leave comments on the publication, you must sign in.