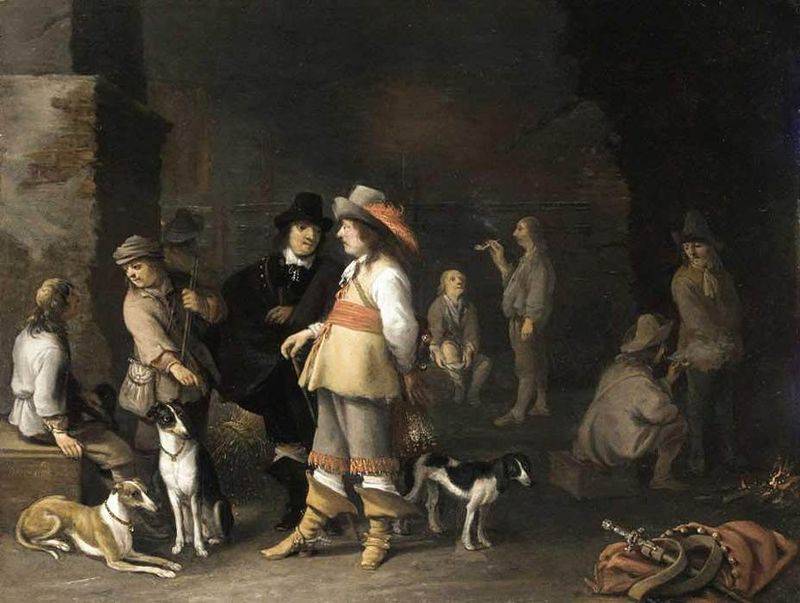 "A guardhouse with dogs." In the center is an officer in a tunic (a thin-skin caftan), who was worn under a cuirass, but who everyone else is, is very difficult to say. That is, maybe these are soldiers, they just look more like tramps basking around a fire. Rabble rabble, and those are present in all the paintings of the artist with "guardrooms." In the background, one character is changing shoes. In the paintings of Anthony Palamedes, this storyline is repeated with enviable constancy. Of weapons we see only a heavy cavalry sword on the floor on the right
This is all so familiar, and it seems: in a fairy tale, I,

And I am ready to exclaim with obsession: vade!
Have I met you, Rembrandtova Saskia?
Am I back in your age, Adrian van Ostade?
Valery Bryusov

Pictures tell. To begin with, the material “The pictures are telling. "The guard" the VO readers liked it, well, except for some, which is normal in principle, I also hate cabbage pies, although the Polish bigos, for example, I eat with great pleasure. And many wished that the theme of painting, as a historical source, be continued. At the same time, many exactly in their comments indicated that the epicity of the canvas or sculpture, for example, and its historical authenticity - things are often completely different. For example, “Motherland” on Mamaev Kurgan or “Alyosha” in Treptower Park in Berlin are epic works, but it would be strange and absurd to argue on their basis that in a critical situation, Soviet soldiers and their mothers took up swords! Therefore, let's not confuse God's gift with scrambled eggs, but turn to the paintings of the same Dutch who reflected on their canvases many battles of the Thirty Years and Eighty Years War involving many warriors in a variety of armor, and here they are, no doubt, are for us an important source of information about that time.

The last time we carefully examined in fact just one picture of Teniers the Younger “The Sentry”, which, however, gave us very valuable information about that time. But maybe, before turning directly to the battle canvases, we will look at other paintings painted at the same time and on the same subject, but by other painters? It turns out there is!

Here we must recall one good saying of ours that "bad examples are contagious." That is, if some kind of “theme” has “gone”, then imitators appear immediately or the author himself begins to replicate popular stories one after another.

One such “Dutch” was Anthony Palamedes (1601–1673), the Dutch artist of the Golden Age, who worked in various fields of painting. Anthony was an artist of genre painting, portraiture and still life, but he is best known for his paintings depicting musical or funny companies and soldiers of that time. Such works testify to his knowledge of contemporary genre paintings by artists of Harlem and Amsterdam, such as Dirk Hals, Peter Codde, Willem Duister and Hendrick Pot. He was born in the city of Delft, where he eventually became a representative of the famous Delft school.

Palamedes was born in the family of a semi-precious stone carver. He worked with jasper, porphyry and agate, and became a famous stone-cutting master. And so famous that he traveled to England to the court of the King of Scotland, Jacob. But then he had a younger brother, who was also called Palamedes, and the family had to return to Delft, where the brothers grew up.

Painting, according to some sources, Anthony Palamedes studied with Michel van Mirevelt. Others call him the mentor of the Amsterdam painter Hendrick Pot. His younger brother Palamedes also became an artist. However, Anthony had the chance to outlive his brother, who died only at the age of 31 in 1638. In 1621, Palamedes was admitted to the guild of artists of St. Luke, and then he was elected four times as its dean (in 1635, 1658, 1663 and 1672).

Sale of paintings brought Palamedes a steady income. So, for example, he bought a house at the price of 3400 guilders. But then fortune he turned his back on him. His wife Anna died in 1651 and Palamedes in 1658 married a second time. But ... alas, unsuccessfully, about the same as a lumberjack in the 1938 movie "Cinderella". Troubles began at home, and with them - debts and financial difficulties. And it all ended with the fact that Palamedes left everything, left in 1670 in Amsterdam, and there he died in 1673.

And one of his themes just became ... yes, yes, do not be surprised - the theme of the "guardhouse". It is difficult to say how much he wrote the paintings of “The Sentry”, but it is absolutely certain that there are many of them. By the way, this is truly a godsend for scammers who know how to fake XNUMXth-century canvases. Although, on the other hand, the discovery of a previously unknown painting by Anthony Palamedes will cause such a stir that ... the "found" picture will be checked and verified, etched with acids, viewed with microscopes, and in the end it will come to the "atomic gun". It’s just that when a lot of paintings are written on one topic of one artist, there is always a chance to find some kind of accidentally forgotten and unknown.

Interestingly, the Palamedes ’guards are very similar. They have a central figure, which is almost always dressed in a suit of a rider of heavy cavalry, who, however, took off his armor, and is engaged in giving instructions to his comrades, playing the trumpet or just standing in thought. In contrast to Teniers' paintings, there are women in his canvases, including breastfeeding babies and, apparently, wandered to the soldiers in search of adventure or assistance, and even a dog. That is, in the guardrooms of that time of what and who just did not happen!

Well, now let's admire his canvases and see what exactly they can give for the study of military affairs of the 1640th century, and in the period 1650-XNUMX. because it was precisely at this time that his "guards" were dating. 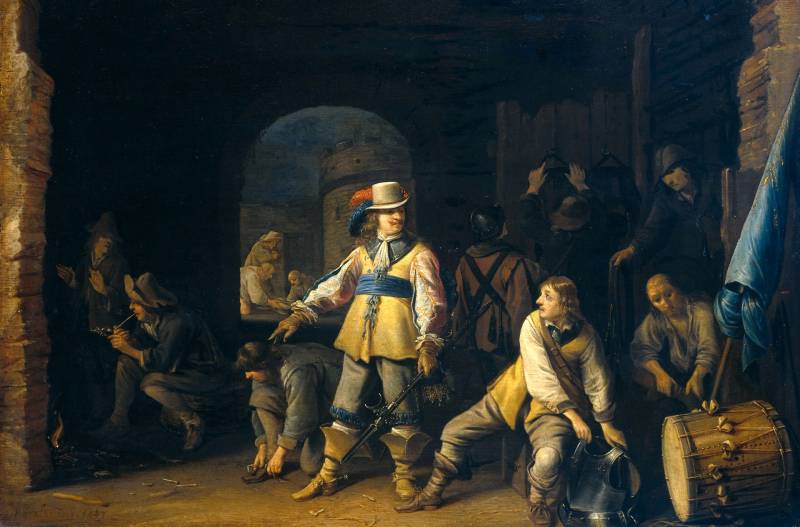 “The Watch” 1647. (Rijksmuseum, Amsterdam) Here the same officer, wearing a dandy hat with multi-colored feathers, gives some indication to the ordinary soldier who has just removed his cuirass. There was only one plateau on the armored officer. In his left hand - protazan, therefore, this officer from the infantry. Other soldiers in the background hang their armor on the wall. And this is clearly the foot soldiers, since in the hands of one of them is a bandelier 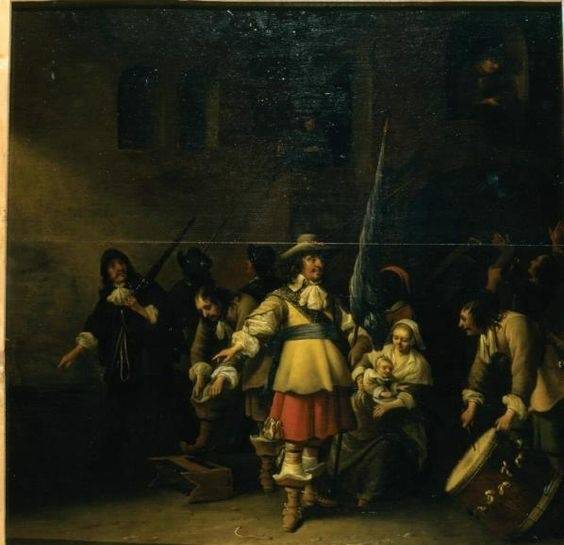 "Squad fees" in 1654. (Pushkin State Museum of Fine Arts, Moscow) The same officer in the yellow tunic, but now with a banner in his hand, makes the same gesture as in many other paintings 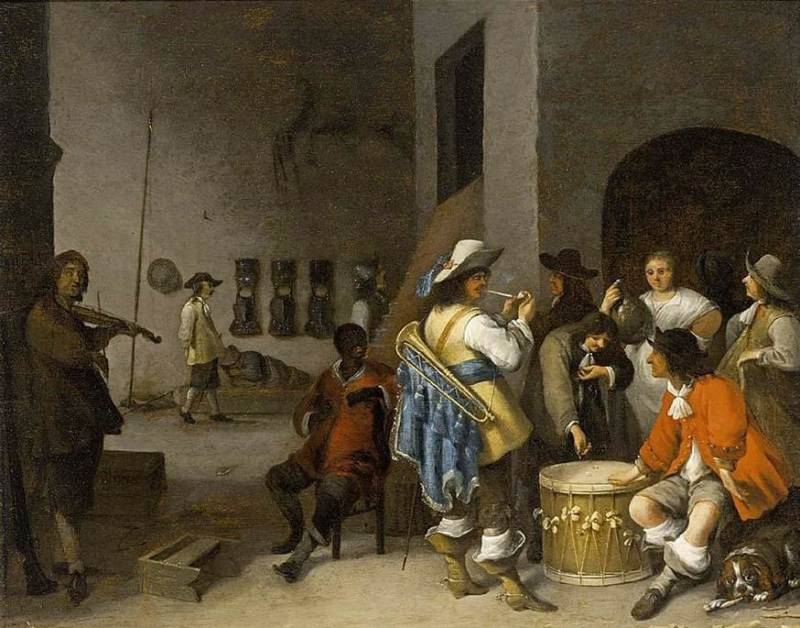 “Scene in the guard” And what do we see here? A “trumpeter in a yellow camisole”, a Negro servant (that is, they were already imported to Europe, and judging by the pose, they felt not at all humiliated here!), A violinist, dice players, and a dog gnawing a bone - all very vitally and in his own way, touching. Armor (double cuirasses) hanging on the wall from behind. (Private collection) 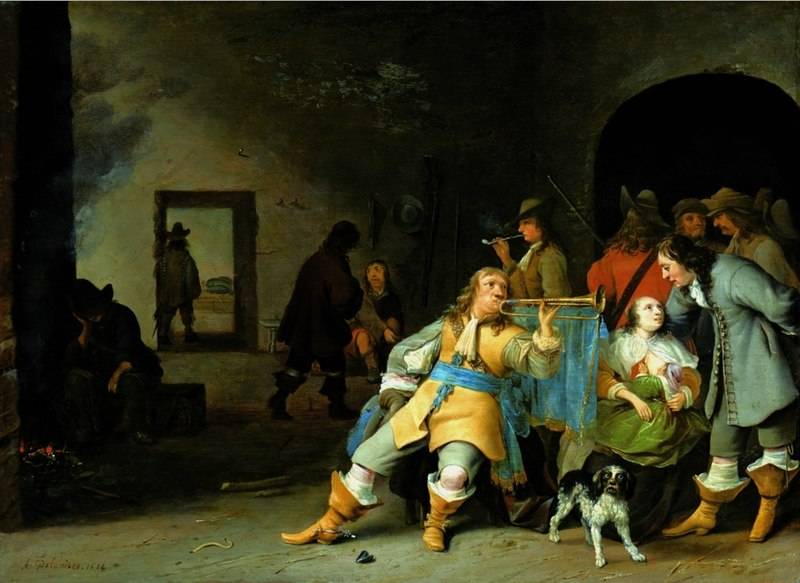 Another painting of 1654 and it still has the same guardhouse with a trumpeter in a yellow camisole (tunic) (Royal Baths, Warsaw) 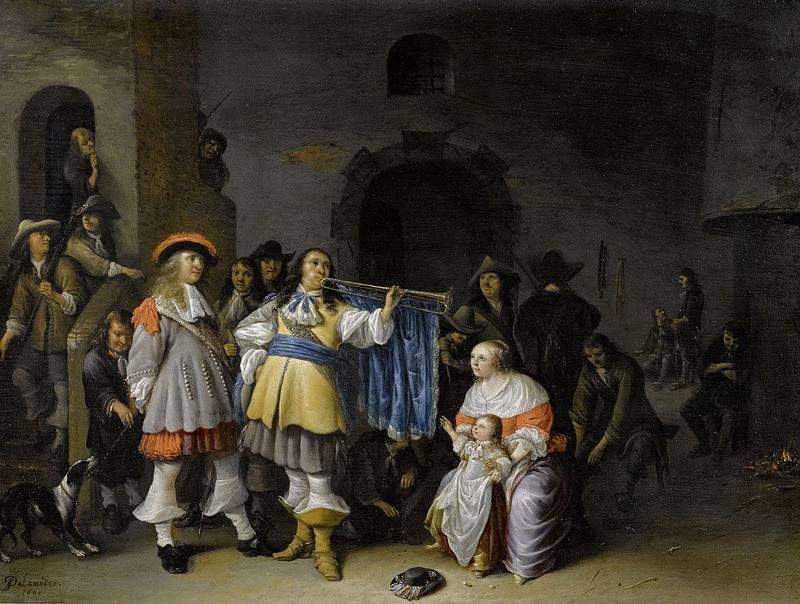 Here the officer got up and blows the horn, and a woman with a child and all the other characters are watching him. The task of the trumpeter in the Dutch army was to notify all the soldiers in the guardroom that there was an order from the commander to pack up and leave 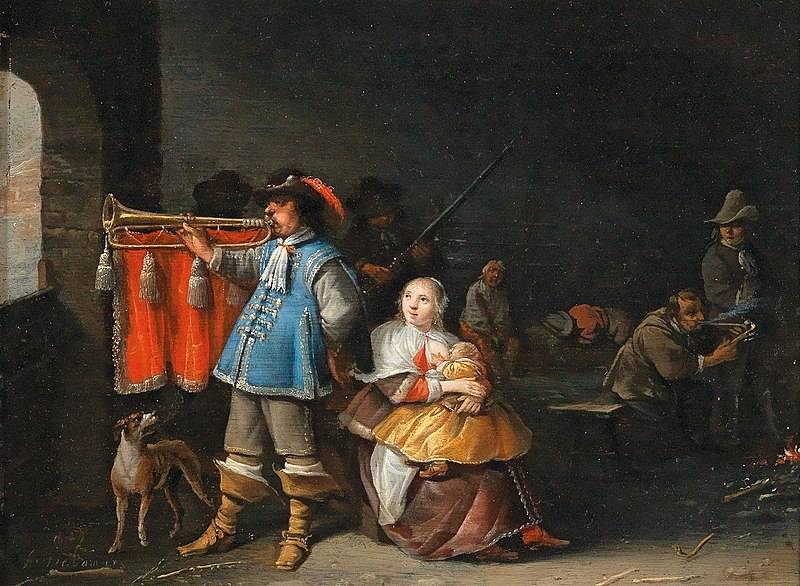 The flag on the hearth is red, and the camisole is already blue, obviously woolen, not leather. But you still can’t do without a woman with a baby ... 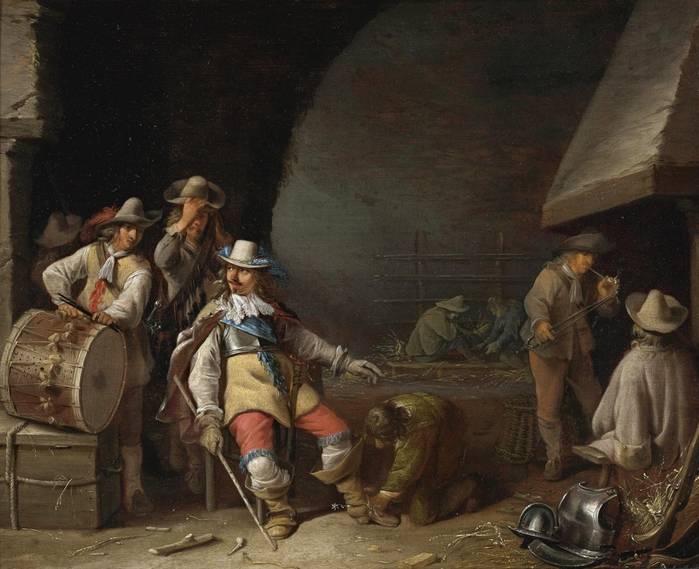 "In the guardroom." (Private collection) Here the officer in the cuirass is clearly tired and waiting for the servant to serve him. Of weapons - armor in the right corner. Behind him is a musketeer. 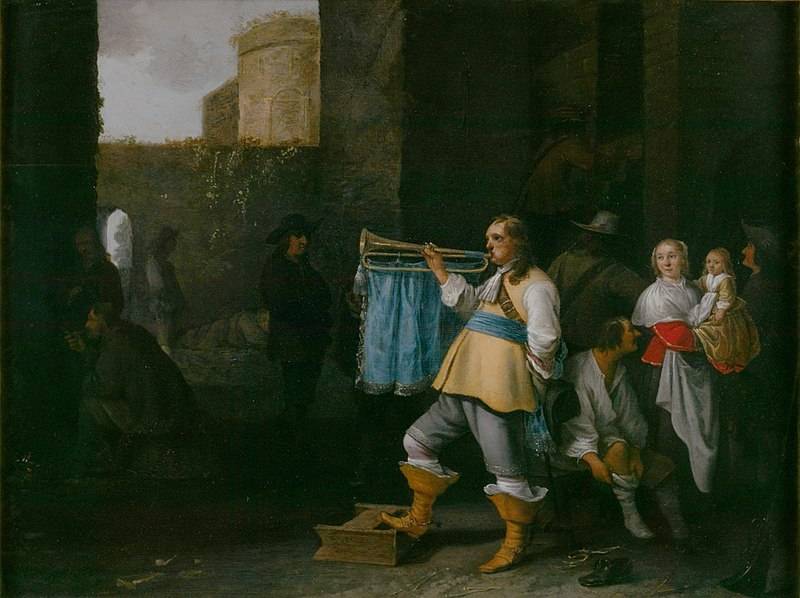 Another painting with a guardhouse in 1654 (Victoria and Albert Museum, London). Then the hatler removed his hat ... 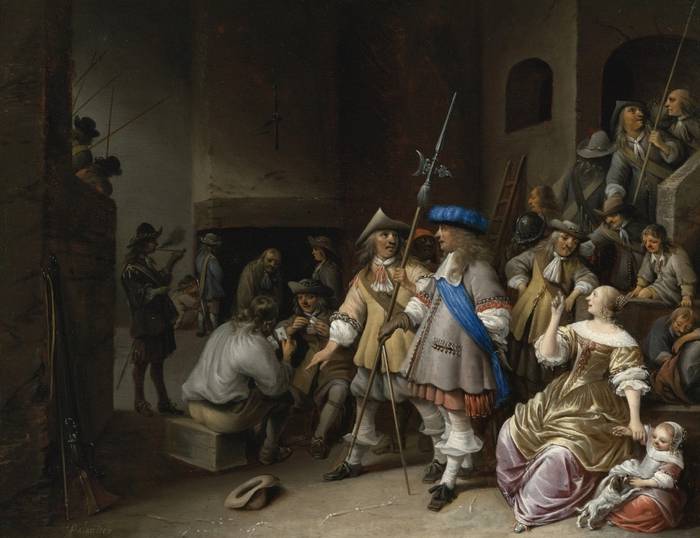 In the center of this canvas, which is called the “Pikemen Company Sentry”, is an officer with a protazan, next to which stands a second officer with a cane. A woman and a child are present. True, there is no drum that is found in many of his paintings. But the musket with the stand is perfectly depicted on the left by the wall. True, it’s not very possible to discern which lock he has - wheeled or wick
And this is far from all the “Caral rooms” that this Dutch artist wrote. But we now absolutely know now how the soldiers and junior officers in 1654 were dressed, which cuirasses, muskets were worn and which women and babies came to the “guardhouse” then.