In Bulgaria, a bus exploded with Israeli tourists 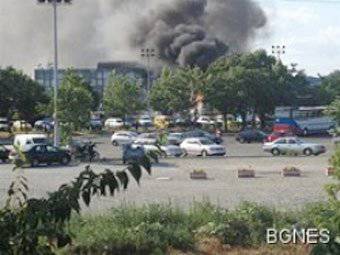 Three people were killed in the explosion of a bus with Israeli tourists in Bulgaria, reports Reuters, citing the Bulgarian police. The blast occurred on the evening of July 18 near the airport of Bourgas, located on the Black Sea coast 400 kilometers east of Sofia.
Earlier, the local news agency BGNES reported five dead. According to Agence France-Presse, at least 20 people were injured. The Ministry of Internal Affairs of Bulgaria has qualified the explosion at the airport of the city of Burgas as a terrorist act, according to Interfax.

A spokesman for Israeli Prime Minister Ofir Gendelman told AFP that a bus was fired at and a bomb was thrown at him. At the same time, according to eyewitness accounts, the explosion occurred after a certain unknown person entered the bus. It is reported by the Associated Press with reference to the Israeli channel Channel 2 TV.

Sofia News Agency reports, citing local media, that there were about 40 tourists from Israel on the bus. As a result of the explosion, three buses caught fire in the parking of the Burgas airport.

Shortly after the explosion, the Burgas airport was closed. All flights are redirected to the city of Varna.
Ctrl Enter
Noticed oshЫbku Highlight text and press. Ctrl + Enter
We are
Police in New York: Iran is behind the terrorist attacks against the Israelis. Report data.Reports from the militia of New Russia for 27-28 September 2014 of the year
Military Reviewin Yandex News
Military Reviewin Google News
50 comments
Ad