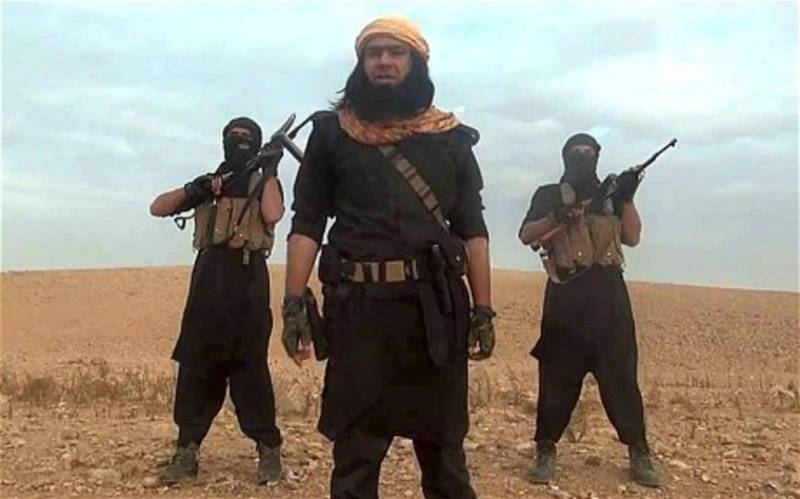 Recently, the number of provocations against our country has been increasing. And more and more new actors can be involved in them, for example, terrorist groups operating in the Middle East and North Africa.

A few years ago, the whole world was struck by the triumph of the ISIS terrorist group that grew out of nowhere (the Islamic State of Iraq and the Levant, banned in Russia), which soon became known simply as the Islamic State - the Islamic State, since its activities crossed the borders of Mesopotamia and spread to North, West and East Africa, Southeast and Central Asia and a number of other regions of the planet.

IS turned into a kind of terrorist international, in which former Iraqi army officers Saddam Hussein coexisted with Uyghur separatists, North Caucasian militants, Nigerian and Malian jihadists, and Filipino radical rebels. No one in the structure of the Islamic State, no exotic groups from the most different regions of the planet joined them on their own initiative!

At that time, it was honorable and profitable to relate to the structure of an international terrorist organization, since many militants of small groups underwent a run-in in Syria or Iraq. There they also earned money, not bad by the standards of poor West African or Central Asian states.

There was a period when in almost every country where radical fundamentalist groups operate, at least one of them proclaimed itself the local branch of the Islamic State. In the Philippine jungle, and in the Malian sand, and in the Nigerian savannah, groups and groups appeared, declaring themselves the local branches (emirates) of the Islamic state. Naturally, our country did not escape not only the appearance of such cells, but also their commission of criminal acts - from terrorist attacks to banal criminal attacks with the aim of hijacking vehicles or robbing banks and shops.

However, any sunrise will inevitably be followed by sunset. So it happened in the case of the IG. Her victorious march through Syria was stopped by both Kurdish militias and Syrian government forces, but the Russian military played almost the key role in the victory over IS aviation and actions of special forces. As a result, the IS lost almost all of its positions in Iraq and Syria, “shrinking” in backward and very small territories.

The created “Caliphate” IG suffered crushing defeats and actually ceased to exist precisely as a state, or rather, a quasi-state. Now the IS has turned into what it was before its triumph - into disparate insurgent groups that actually do not have real political and military control over any large territories.

The subsequent death of Abu Bakr al-Baghdadi became a symbolic evidence of the almost complete collapse of the project called the Islamic State. Although she did not even play any decisive role in the fate of this strange quasi-state organization.

New masterpieces of the IG: propaganda

Naturally, the propaganda machine of the IG collapsed. There was a time when a large number of various propaganda material was produced - from very high-quality videos to printed materials. Even the hand of good specialists was felt, and not just operators - artisans. Then, the quality of IS propaganda began to decline rapidly - and in direct proportion to the general decrease in the real military-political influence of the group. 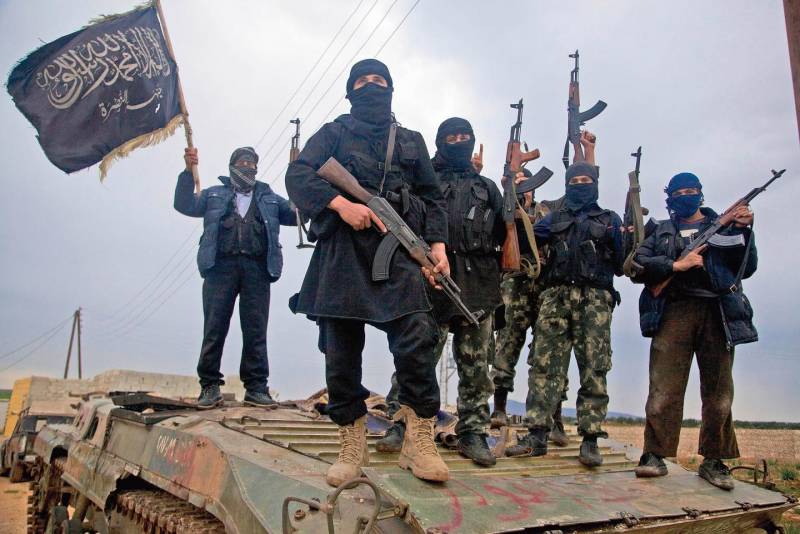 Indeed, what could the cramped and hiding terrorists now show? Accidental executions of people who accidentally fell into their hands, or even their own comrades, suspected of treason or other sins? The videos became worse and worse in quality, less and less went to channels controlled by Ishilov’s.

But the militants retained active communication on Telegram, which is practically uncontrolled by special services and is the main “conspiratorial” communication resource used by everyone who is not lazy - from pedophiles to satanists, from drug dealers to terrorists.

Today in the Middle East, it is this messenger that remains the most sought-after communication resource, thanks to which disparate groups of radicals have the opportunity to keep in touch with each other, contact their comrades, and recruit new supporters and like-minded people. To some extent, we can assume that it is thanks to this resource that any coordination capabilities of terrorists in Syria, Iraq and several other states still remain, since many of the previous channels and communications were lost during the defeat in the Syrian war.

It was on one of the closed channels that a peculiar appeal (or statement?) Of the “Islamic State” has recently appeared. It is addressed to the militants who were captured by the troops of the Syrian democratic forces and who are in prison camps, guarded by Kurdish militias. It is known that the Kurdish militia is still supervised by the US military, and therefore the further actions of captured militants should be aimed precisely at attracting the attention of Americans.

You won’t outwit the devil anyway

“We work for Russia!” - it turns out that is exactly what the captive Ishilians should be told during interrogations. Naturally, such statements will immediately attract the attention of interrogators, American officers will come running, and, as the authors of the propaganda video believe, will begin completely different история. Since American intelligence agencies are interested in discrediting Russia and in weakening its positions in Syria, they may well release such militants, form groups of them and send them to fight again. The atrocities that are being created will be broadcast as the actions of groups "working for Russia."

IG fighters are convinced that, following such an instruction, they are deceiving the Americans and, having received freedom, return to terrorist activities. But, no matter how much they would like to believe in their capabilities, to be trickier than the devil (or shaitan) will fail. Not the IS of Americans will use, but the American intelligence agencies will use the IS for their own purposes, at the same time casting a shadow on Russia.

By the way, the American special services are really with great interest working with those captured terrorists who declare their relations with the Russian special services. No evidence is required, just words are enough. Of particular interest is the North Caucasians, the citizens of the former Soviet republics of Transcaucasia and Central Asia. 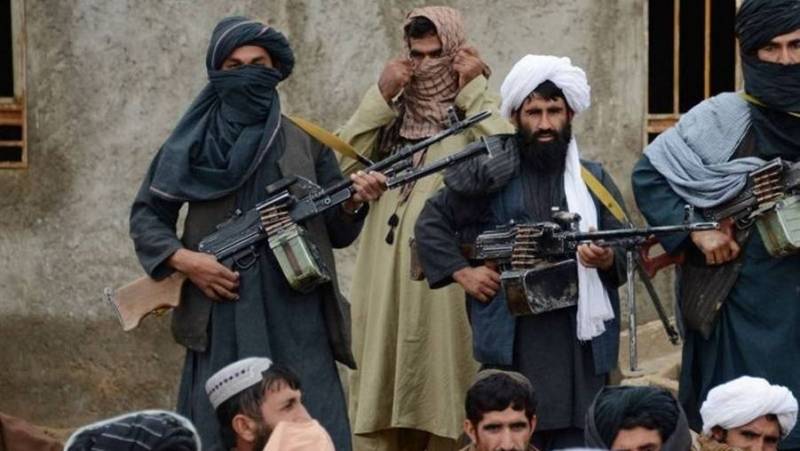 Finally, one should not forget that the American special services have very real opportunities to control the activities of the terrorist underground from West Africa to the Philippines and from Central Asia to Mozambique, and so without such difficult efforts. Many groups at one time were created with the direct participation of agents of the American special services or, at least, were guided by “useful idiots” (there is such a term), acting in the name of the victory of Uncle Sam's interests.

This has been the case since the Cold War, when Americans and British viewed the religious extremists of the Middle East as the only powerful alternative to the pro-Soviet secular Arab nationalist movements. The radicals carried out terrorist attacks in Syria, Egypt, Iraq, Algeria, and when the war in Afghanistan began, the cooperation of American intelligence services with Middle Eastern and Afghan radical groups increased as much as possible. Actually, it was at that time that the terrorist underground finally took shape, which then underwent a further run-in in Bosnia and Herzegovina, Chechnya, Syria, Iraq, and Libya.

Due to changes in the current situation in Syria, militants are forced to leave this country or to be destroyed. And numerous groups of fighters from the republics of Central Asia, from the same Russian Caucasus, are reaching back. An ideal region for the new outbreak is the southern underbelly of the former Soviet Union, primarily Afghanistan. It was here that a significant number of terrorists who left Syria were concentrated.

For example, in September 2019, the head of the 5th service of the FSB of Russia, Sergey Beseda, reported on the transfer with the help of American military militants ISIS from Syria to the northern regions of Afghanistan. According to the representative of the Russian special services, in this way the Americans plan to rekindle hotbeds of tension on the borders of the Central Asian states, and in the future - on their territory.

Therefore, the interest of the American special services in the militants captured in Syria (immigrants from the Caucasus, the Volga region, Central Asia, Afghanistan) is quite understandable and fits into the general US military-strategic plans for Russia and the Russian presence in the Central Asian region.

We are in Yandex Zen
Peshmerga: Kurds as a barrier to religious extremism in the Middle East
What threatens the world and the Russian caliphate
25 comments
Information
Dear reader, to leave comments on the publication, you must to register.