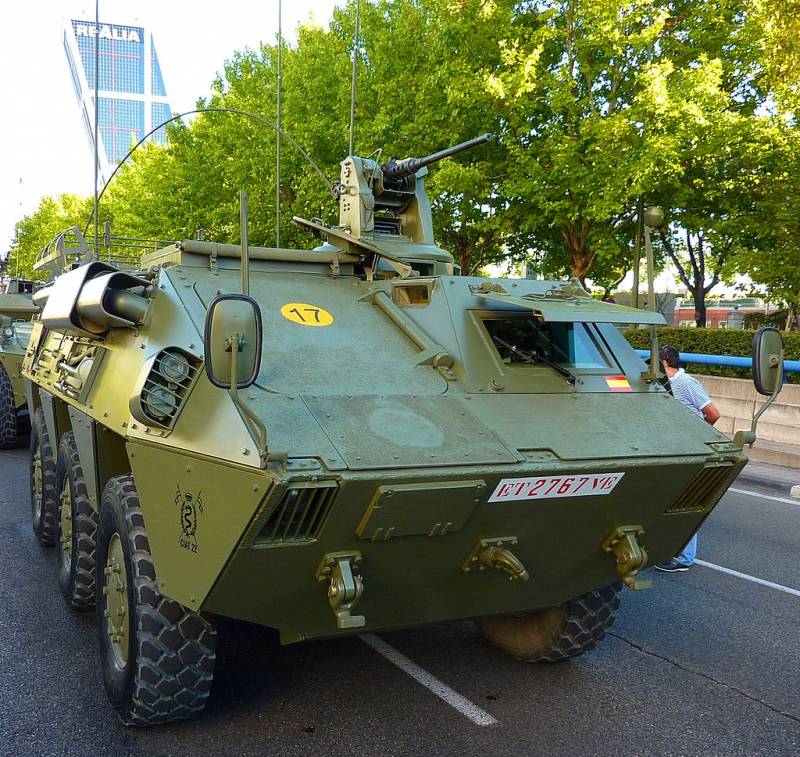 BMR M1 of the Spanish Army

History of the creation of the BMR armored personnel carrier

The requirements for a new wheeled combat vehicle were developed by the Spanish military in the early 1970s. Fully technical and tactical requirements were ready in 1972. Then the military turned to representatives of the Spanish industry with an order to create an armored armed wheeled vehicle designed to transport an infantry squad to the combat zone, as well as actions directly in a combat situation. The project of the new armored personnel carrier, which was originally considered as a base for armored vehicles for various purposes, was jointly developed by the Arms Development Commission, the army and the large industrial company ENASA.

It should be noted that ENASA was founded in 1946 and at that time was a major manufacturer of automotive equipment. In many ways, the company was the heir to the automotive assets of Hispano-Suiza's Spanish division. By the beginning of the 1970s, the company was producing a fairly large line of trucks, buses, tractors, as well as armored vehicles for the Spanish army under its own brand Pegaso. The development process of the new armored personnel carrier took four years, all this time the Spanish designers worked on prototypes and tested them. 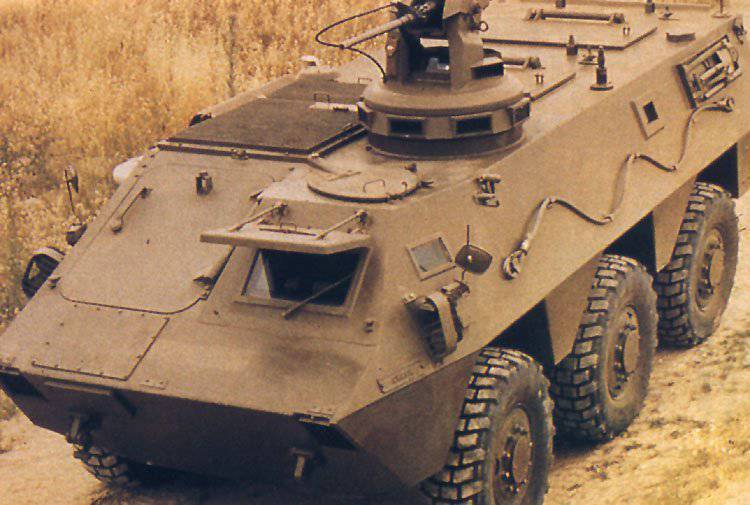 Armored personnel carrier BMR-600
It is known that during the tests, the Spanish APC competed with foreign counterparts: the French armored personnel carrier Renault VAB and the Swiss MOWAG Piranha. All cars were considered with a 6x6 wheel arrangement. The development of the company ENASA convincingly looked against the background of competitors and left the Spanish military a favorable impression. Quite quickly, the military presented a whole line of wheeled armored vehicles: the armored personnel carrier itself: Pegaso 3560/1 model; self-propelled 81-mm mortar Pegaso 3560/3; Pegaso 3560/5 command and staff vehicle; as well as the Pegaso 3564 fire support vehicle, on which various towers with artillery weapons could be installed, including the French two-seat turret TS-90 with a 90-mm gun located inside.

For their wheeled armored personnel carrier, Spanish designers have chosen the following layout. In front of the left side is the driver’s seat, immediately behind it is the arrow / radio operator’s seat. To the right of them is the engine-transmission compartment, in which the diesel engine is located, the exhaust pipe is displayed on the right side of the case. In the aft of the combat vehicle is the landing squad. The crew of the car consists of two people. In the paratrooper squad are places for 10 foot soldiers. 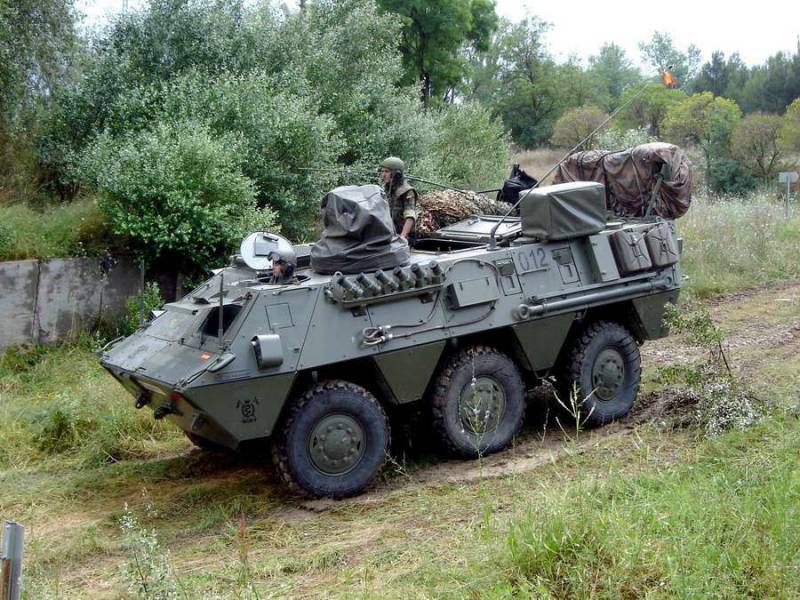 The body of the armored personnel carrier was made of aluminum armored plates by welding. All armor plates are located at rational angles of inclination. The upper frontal part provided protection from bullets of caliber up to 12,7 mm inclusive, as well as 7,62 mm armor-piercing bullets. The circular armor protected the APC from small arms fire weapons caliber up to 7,62 mm and fragments of shells and min. In addition, the armored personnel carrier had to withstand the detonation of a mine containing up to 3 kg of explosives. At that time, such armor protection was considered sufficient, but in the course of subsequent upgrades, the reservation was significantly strengthened. For landing and disembarking from an armored personnel carrier, paratroopers could use two large hatches located in the roof of the hull, but the main method of disembarkation was a stern ramp. An additional method of evacuation from the combat vehicle subsequently became a side door located on the left side in the rear of the hull. It could be used if the rear ramp did not open for some reason.

The main weapon of the BRM-600 armored personnel carriers was a large-caliber 12,7 mm M2 HB machine gun, which was mounted outside the 360-degree turret TC-3 developed by Santa Barbara Sistemas. It was possible to reload the machine gun and control it without leaving the fighting vehicle. The machine gun had good angles of vertical guidance from -15 to +60 degrees, which allowed it to be used for firing at air targets. Ammunition for the machine gun was 2500 rounds. 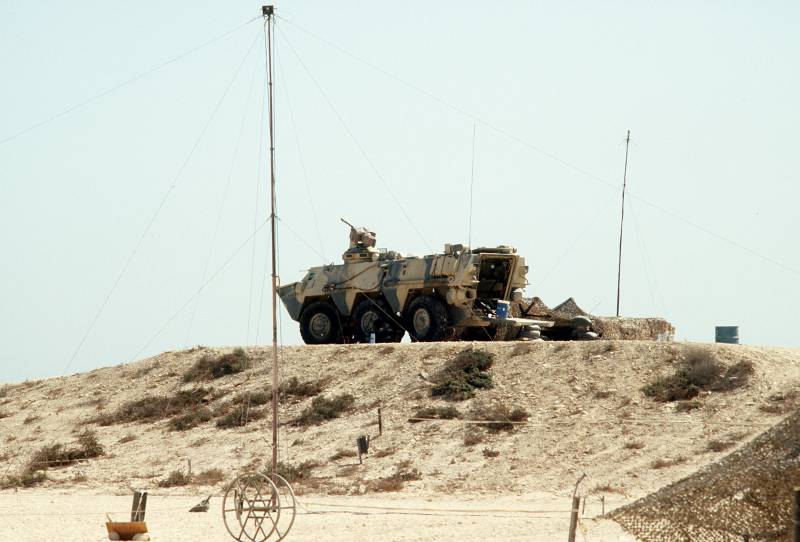 Photo: TECH. SGT. HEIMER
The heart of the combat vehicle was the 8-cylinder Pegasus 9157/8 diesel engine, delivering a maximum power of 305 hp. Engine power was enough to disperse an APC with a combat weight of about 14 tons to a speed of 100 km / h when driving on a highway. The cruising range was 1000 km, very worthy indicators for wheeled military equipment. The armored personnel carrier felt good on rough terrain, characterized by good cross. He could overcome rises up to 60 degrees, ditches and trenches up to 1,2 meters wide and vertical walls up to 0,8 meters high.

Since 1996, almost all the machines remaining in the arsenal of the Spanish army have been upgraded to the BMR M1 version. Santa Barbara Sistemas, which today is one of the largest Spanish defense companies specializing in the production of various armored vehicles, was responsible for the modernization of combat vehicles. Since 2001, the company has been a division of European Land Systems of General Dynamics. During the modernization, the cars received a lightweight and more compact 6-cylinder Scania DS9 diesel engine with 310 hp and a new 365 liter fuel tank (instead of the 300-liter). 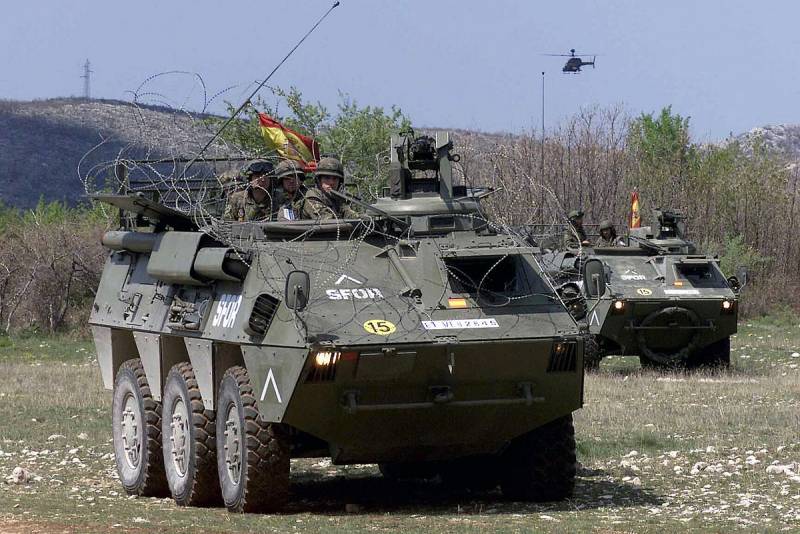 We are in Yandex Zen
In the footsteps of the exhibition Eurosatory 2016: trends in the development of armored vehicles. Part of 2
Family BTR-60 / 70 / 80 in combat
33 comments
Information
Dear reader, to leave comments on the publication, you must to register.