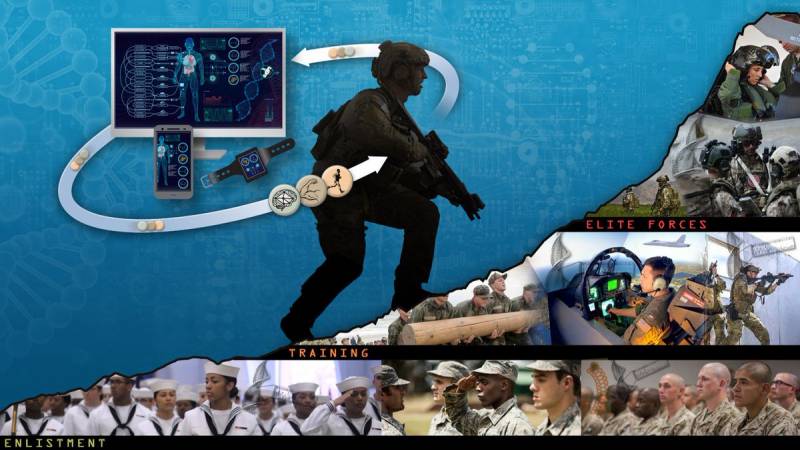 To the last drop

Every year, the loss of a well-trained fighter on the battlefield costs the state more and more. A pile of financial guarantees that have to be paid by the defense departments of different countries, as well as the inevitable reputation losses from the deaths of military personnel, make us look for new approaches to warfare. On the one hand, flirting with robotics - it is no coincidence that unmanned aerial vehicles have become a real mainstream lately. Still, training a good pilot is very expensive, and the “inhuman” device is much cheaper than the habitable one - it's not so bad to lose it. Despite the progress in the robotics of celestial technology, ground-based systems are still far from ubiquitous automation, or at least the transition to remote control. Therefore, they will try to improve the infantryman by other means - so that he fights more efficiently, dodges bullets, does not get tired and does not get sick. Initially, various exoskeletons should become assistants in this matter, but they can perform their functions for a limited time with the current energy storage technologies. Moreover, it is not clear how long such an exoskeleton can work, say, at temperatures below minus 20 degrees. Be that as it may, the most energy-efficient fighter is a well-trained, physically strong and healthy man. But now, even with the most optimal training regimen and nutrition, the military seems to have rested on the ceiling of human abilities. And, if we discard all the medical stuff that turns fighters into drug addicts, then it seems that the only way out to the "advanced settings" of the body is to upgrade the genotype. 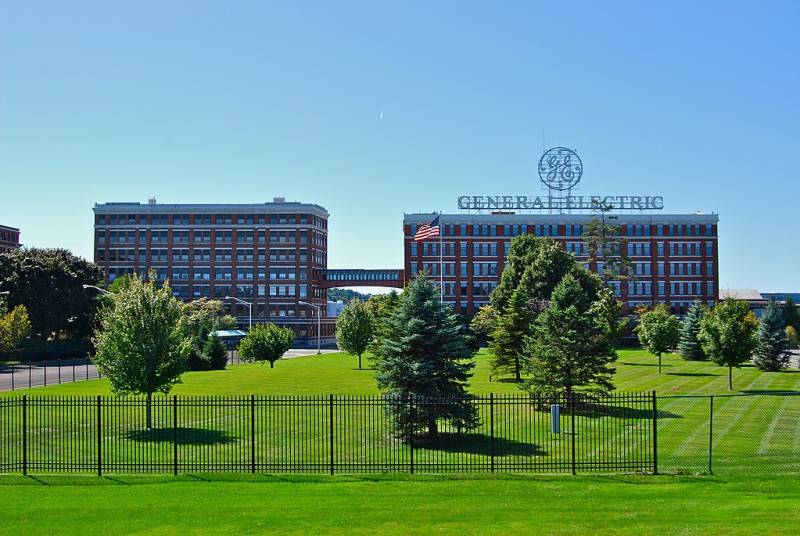 General Electric Research, one of the participants in the Measuring Biological Aptitude project
In January 2019, DARPA, the forge of all the newest Americans in the military, launched the MBA (Measuring Biological Aptitude). The approximate terms of the project are limited to four years. The MBA attracted reputable offices: the research cluster of the giant General Electric - GE Research, the Florida Institute for Human Machine Cognition and the Livermore Laboratory. Lawrence.

At the moment, DARPA very vaguely explains the main areas of work of the team. It is clear that GE Research is working on special miniature needle sensors that read a lot of body parameters at different points in the life of a soldier. The second analytical instrument will be the tooth pad developed at the Institute for Human Machine Cognition. The Livermore Laboratory coordinates the work of units, analyzes and summarizes the results. The set of microneedles with which it seems that the Americans will be lapping their fighters will allow you to remotely monitor the psychophysiological state of the military. And at the most crucial moments of the battle, the unit commander will decide on the basis of sensor readings who to throw in the attack, and who is better to temporarily take to the rear for recovery. Most likely, the human mind will not be able to work with such a stream of data so quickly, so artificial intelligence will still give recommendations to the commander about the nature of the battle. That is, indirectly manage human resources. 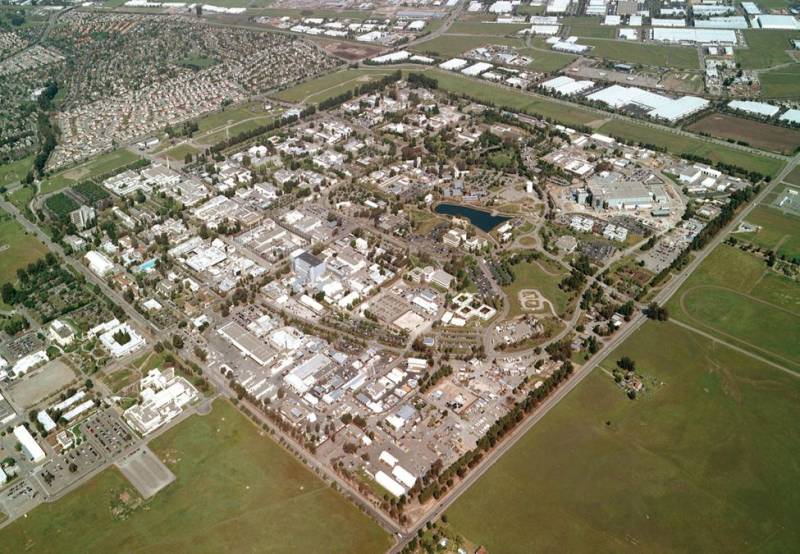 Livermore Laboratory Lawrence
In lengthy discussions about the goals of DARPA, an analysis of the relationship between the human genotype and its phenotype (external manifestations) is especially notable. That is, Americans are trying to develop mechanisms for more effective implementation of the genetic potential inherent in humans - to enhance the expression of genes that a fighter needs. For this, according to representatives of DARPA, 70 subjects will take into account all the nuances of the body during periods of physical exertion, stress and rest. Psychologists will test subjects for quick wit, memory, attention and learning ability. Of course, the genome is carefully scanned for everyone beforehand and correlated with phenotypic characters. If useful “combat” genes are discovered that for some reason “sleep”, that is, do not express, researchers will look for a way to make them work. Here, DARPA, it seems, generally tackled the fundamental problem of studying the most complicated mechanisms of information transfer from genes to external phenotypic characters. Will three institutions be able to solve this problem? The question remains open. Nevertheless, for several decades, the leading genetics of the world have been struggling with this with varying success. As you know, with a constant set of genes in the phenotype of different individuals, a huge variety of external characters can be observed.

At the first stage of the work, scientists will look for a useful “design” for the ideal soldier. To do this, sensors are used to weigh the most successful fighters of the US Army, identify the most characteristic signs (for example, a low heartbeat in a stressful situation), and after analysis begin to search for the genetic background of the phenomenon. In this case, special attention will be paid to highly specialized professionals: snipers, sappers, pilots, scouts and operators of complex equipment. As a bonus to the Measuring Biological Aptitude program, a universal career guidance program for working with US Army recruits will appear. Here, for example, a young man came to enroll in a flight school. It’s good for everyone: health is excellent, smart, and psychologically stable, but a couple of genetic markers show that the future cadet will be much more successful in the work of a UAV operator or sniper. It remains only to correctly convince the future military man that he is not a "flyer".

All this история It looks very beautiful from the side, however, given the rich history of US military pharmacology, there are thoughts that DARPA is still considering other scenarios for the development of the program. Certain chemicals that enhance the work of certain groups of genes, as well as frank genetic doping, can become individual products of the project. The benefit in sports medicine has accumulated sufficient competencies in this regard.

Technologies for improving the physical performance of athletes and accelerating rehabilitation after competitions have long moved from purely chemical doping to the tracks of genetic improvement. One major benefit of genetic doping is its almost total secrecy from WADA officers. The first and only thing about the use of this type of doping in sports was the use in 2003 of a repoxigen drug from the pharmaceutical company Oxford BioMedica. Coach Thomas Springstein tried it on his minor wards, for which he was criminally liable. The repoxygen drug, by the way, was not intended for gene doping, but was a cure for anemia containing the gene (enclosed in the viral vector) of erythropoietin. Now on the sports horizon there are no scandalous News about exposing another athlete indulging in injections of other people's genes. This is because it is virtually impossible to expose: in some cases, doctors have learned to build up individual muscle bundles by local injections of genetic material. But in order to track this, the WADA officer needs to take a blood sample from the injection site, and this, of course, is impossible. At the same time, in all self-respecting sports powers accumulated considerable banks of genetic data of outstanding athletes, which are stored, of course, not only as an inheritance to descendants. Therefore, sports genetics and pharmacology, as well as the completion of the resonance project "Human Genome", created all the conditions for further modification of the military. 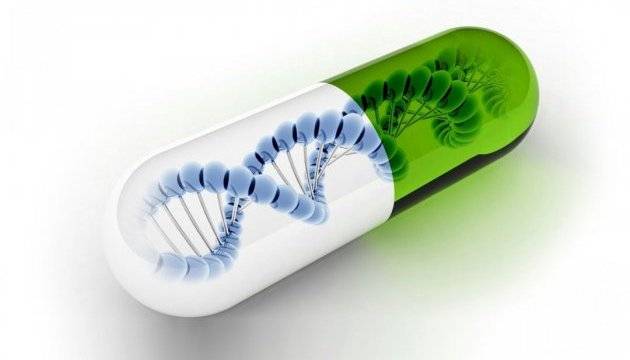 A progressive decrease in the cost of screening the human genome also plays into the hands. Already now, about 200 genes are known that are responsible for the physical abilities of a person, which, with the proper level of desire, can be dispersed well on a specific individual. Yes, of course, the military also needs genes for cognitive activity, but a couple of years of research is enough to track them. We will simply list a few of the most important biomarkers that are factors in the success of an athlete: the ACE gene or the “sport gene," whose different forms are responsible for endurance and speed-strength qualities; ACTN3 gene - an important factor in the success of physical training, is responsible for the structure of muscle fibers; UCP2 gene regulates fat and energy metabolism, that is, it allows the body to more efficiently burn "fuel"; the 5HTT and HTR2A genes are responsible for serotonin in the body - the hormone of happiness. In general, the nature and scale of the achievements of sports genetics allows us to draw the following conclusions. First, it seems that the ceiling in sports gene doping, if not reached, is about to be. And researchers with pharmaceutical companies need new markets. Secondly, the US military in connection with the initiative Measuring Biological Aptitude become ideal consumers of technology for gene doping. Most likely, in the framework of the study of the processes of gene expression in the human phenotype, the adaptation of sports technology to the military sphere is being considered. And microneedle sensors here can be very handy.

Of course, no one talks about the widespread invasion of combat genetically modified armed cyborgs with a star-striped flag, but a qualitative increase in the combat capabilities of the US Army may well take place in the foreseeable future.