Turkish politics: the path to a new war in the Middle East 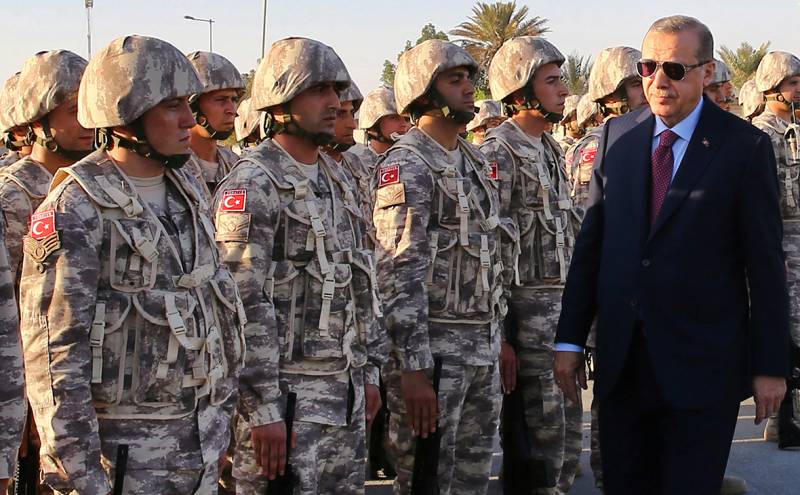 Modern Turkey has long been pursuing an independent policy in the region, which many political scientists call neo-Ottoman. Ankara really claims to be the new regional superpower. But what consequences such ambitions of the Turkish leadership can lead to is not very clear.

Gradual break with the USA

The first evidence of Turkey’s new global plans and ambitions is the deterioration of relations with the United States. America’s loyal geopolitical ally, modern Turkey no longer wishes to follow the orbit of American influence and be an additional small gendarme in the region. Therefore, Recep Erdogan decided on a demonstrative conflict with Donald Trump over the purchase of Russian S-400s.

When the American leadership threatened the Turks with sanctions, they, without hesitation, immediately raised the question of the continued existence of US military bases in Turkey. For the US, military bases, especially in Incirlik, are very important. After all, Turkey has a strategic position in the region and allows you to control the Middle East, the Balkans, the Black Sea, the Caucasus. In Incirlik, for example, an American aviation.

Most of the Turkish left at one time shed rivers of blood during the May Day demonstrations, demanding that the Turkish authorities withdraw the American troops from the country. Turkish blood poured, because then it was extremely unprofitable for the generals to get rid of American bases, and the owners overseas gave permission to beat peaceful demonstrators.

In response, in Turkey, at one time, and very actively, leftist groups, whose fighters abducted the American military, carried out terrorist attacks against American military installations in Turkey. About this, the author of the article has a whole series of materials.

As for the modern Turkish elite, now the situation has changed. And now the far-right Erdogan is threatening to do what the Turkish left has dreamed for decades. He understands that the withdrawal of American bases will not only give him additional political points, but will also make him the real father of the nation, who saved the country from a foreign military presence.

In addition, Erdogan seriously believes that it is Ankara, not Moscow or Washington, that should play a paramount role in foreign policy issues in the Middle East, including in those countries that once were part of the Ottoman Empire.

Indeed, almost all the countries of the Arab Spring of 2011 are Ottoman countries: Egypt, Tunisia, Libya, Syria, Yemen. And Turkey considers itself entitled to take part in their politics, at least as much as Great Britain - to participate in the affairs of the Commonwealth or France in the former French colonies.

Of course, the Americans will find alternative options for placing their bases, for example, in Greece or Cyprus, but this will require cash investments, and most importantly - time. The Pentagon is ready for such a scenario, since they consider Turkey’s policies unpredictable.

The next evidence of Turkey’s revitalization is a military operation in Syria. So much has been written about it that it would not have been possible to repeat it if it were not for the need to point out that the main clash of Turkish and American interests occurred here on Syrian soil. Having attacked the Syrian Kurds, the Turks acted precisely in the interests of reviving their right to control the former Ottoman territories.

In recent years, Turkey has played a very large role in the military-political conflict in Libya. Recall that it was Libya that was one of the last countries that were part of the Ottoman Empire: Turkey lost it before the First World War, losing the war with Italy. 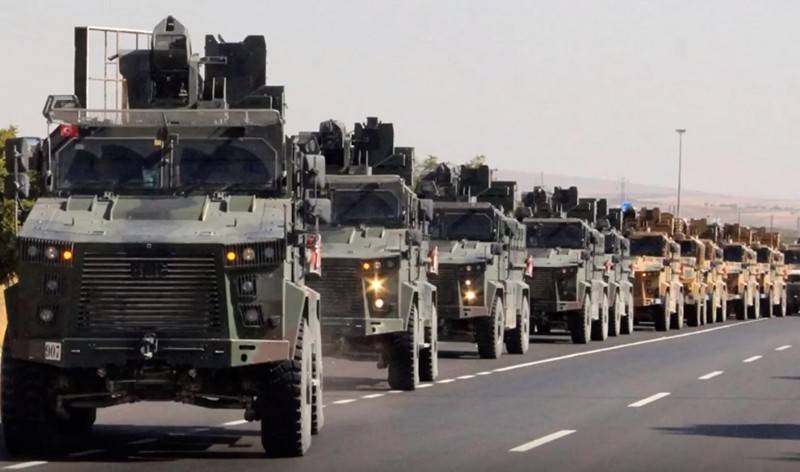 Turkey is now announcing political and economic interests in Libya. Thus, the Libyan oil and gas interests the Turkish side no less, if not more, than the possibility of establishing control over the northern regions of Syria. Indeed, huge money is at stake.

Now Turkey supports the Government of National Accord in Libya, and Field Marshal Khalifa Haftar is seen as the most important opponent of Turkish influence in the region. On December 9, Turkish President Recep Tayyip Erdogan said that the signing of a military cooperation agreement with the PNS on November 27 gives Ankara the right to deploy Turkish forces in Libya and at the request of the Libyan people.

In fact, this means that Erdogan is showing his willingness to repeat in Libya the same scenario that Russia tested in Syria, having come to the aid of the legitimate government of Syria. After a meeting in Istanbul between representatives of the Turkish leadership, headed by Erdogan and the head of the Government of the National Accord of Libya, Faiz al-Saraj, the Turkish armed forces began training troops in Libya.

There is evidence of orders received by the Navy and Turkish Air Force command to begin work on preparing the rapid deployment of aircraft, helicopters and ships. These measures can mean both a banal demonstration of force and preparation for a large-scale military operation of the Turkish armed forces abroad.

Of course, Turkey will still not go for direct intervention in Libya to confront Haftar with absolute certainty, but it is possible that the operation will nevertheless take place, if only to frighten the Marshal and his supporters and bring down some of their plans.

Thus, it is precisely in Libya that, in the very foreseeable future, a new armed confrontation may unfold, in which not only Libyan military-political groups, but also the armed forces of other states will be involved.

Naturally, the situation is disturbed by other key players in the Middle East - from the US to Russia. So, US Secretary of State Mike Pompeo advocated that Moscow influence Marshal Khalif Haftar, advising him to curtail the plan of attack on Tripoli, since this attack could provoke a Turkish military operation.

In Libya, there has been a split between Russia and Turkey

Erdogan’s actions to support the Libyan National Accord Government create a new line of intersection of Russian and Turkish interests. As you know, Russia, if it does not openly support Marshal Khalifa Haftar, at least considers him a full-fledged actor in the political process. Haftar is received in Moscow at the highest level.

Erdogan, emphasizing his sharply negative attitude to the actions of the Libyan national army of Haftar, recently attacked the Russian mercenaries from PMC Wagner, whom he promises not to allow acting in Libya. This is a very tough statement, with Erdogan directly talking about the presence of Russians in Libya, although he could have circumvented this topic against the backdrop of cooperation with Russia in Syria.

Russian mercenaries, according to the Turkish president, are working in Libya for the commander of the LNA, Marshal Khalif Haftar. The arrival of such mercenaries in Libya in September was announced by the authoritative Bloomberg publication, citing its own sources. In November, the version of the arrival of several hundred PMC mercenaries from Libya was also distributed by The New York Times.

News Al-Marsad portal even cited photographs of destroyed Turkish-made armored vehicles as one of the evidence of the supply of Turkish weapons and military equipment. However, no one really doubts that the Turkish side is supplying weapons to the forces fighting for the government of Farraj. 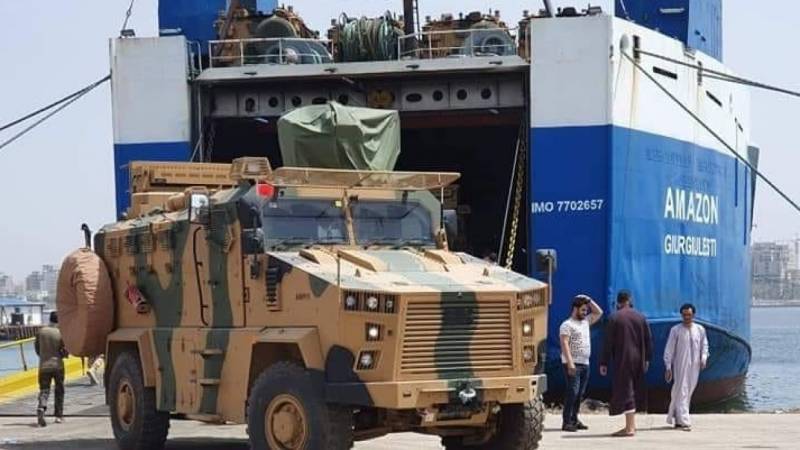 Thus, a negative attitude on this issue may somewhat cool the normalization of relations with Russia that has taken place recently. The possibility of introducing Turkish troops into Libya may seriously concern Moscow, since restrictions on the supply of arms to Turkey may also be imposed, and here already are the interests of our military-industrial complex.

Former US Special Envoy to Libya Jonathan Weiner believes that Haftar’s army alone will not be able to capture Tripoli. Therefore, the Libyans, according to the diplomat, will have to pay a very high price. At the same time, Weiner considers unacceptable the possible participation of third forces in the hostilities in Libya.

In this regard, the growing stuffing about the participation of Russian mercenaries in the hostilities in Libya may cause additional indignation in the West, which will play into the hands of the Government of national consent, supported by both Turkey and the West.

If in Libya, mercenaries of PMC Wagner will fight on the side of Haftar, according to Western media, then in fact they will inevitably enter into combat contact with Turkish troops. In response, the Turks will kill PMC fighters, in fact, the Syrian situation will repeat itself, only in an even worse form.

The Libyan military-political conflict opens a new page in Turkey’s modern political ambitions. The neo-Ottomanism factor must now be borne in mind, rely on it, understanding that Turkey will now be taken care not only of the Kurds on the Syrian and Iraqi borders, but also of Libya, Yemen, Sudan, and many other states of the region. It cannot be said that Turkey is turning into a great world-class power, but it has already become a regional power, and everyone, including Russia, will have to reckon with it.