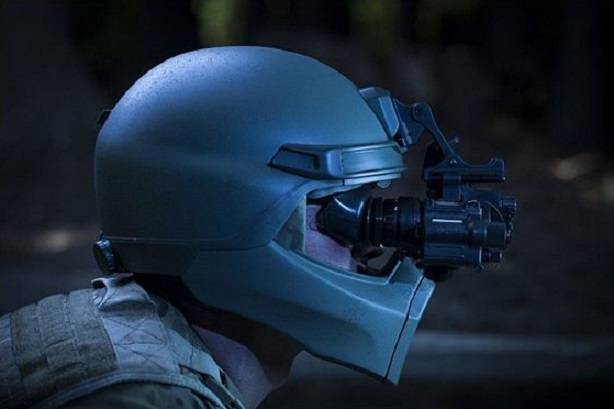 The modern battlefield is saturated with a huge number of weapons designed to defeat the enemy. Barrel and rocket artillery, aviation weapons, guided missiles, mortars, easel and hand grenade launchers. It would seem that under these conditions the role of the infantry weapons as a means of defeating enemy soldiers should be minimized. And this opinion takes place, which affects the specific attitude to this type of armament: they say, if necessary, more than enough Kalash and other similar small arms of the caliber 5,45x39 mm, 7,62x39 mm and 7,62x54R. In the warehouses of such weapons is stored in an amount that is enough for several world wars, respectively, you need to spend money only on ultra-modern weapons: ships, armored vehicles, aviation.

However, in reality, everything is a little different. Based on the available statistics available in various sources on the Internet, in all military conflicts of the 30th and 50st centuries, on average, small arms account for XNUMX to XNUMX percent or more of all killed and wounded. 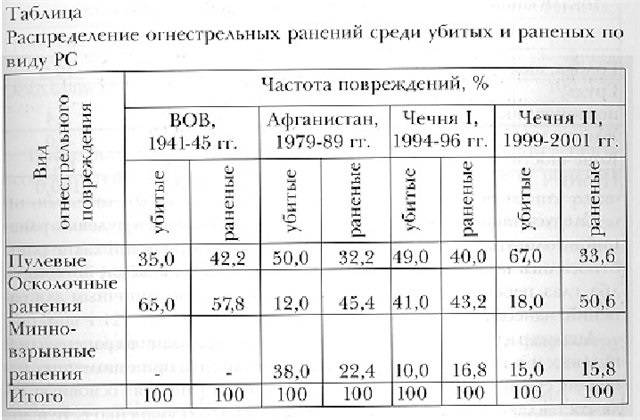 Distribution of gunshot wounds by type of weapon

The structure of combat surgical injuries in wars and armed conflicts

The structure of gunshot wounds by the nature of the damage during the first and second wars in Chechnya
The main damaging factors during hostilities are the following:
- defeat by bullets;
- defeat by fragments of exploding high-explosive fragmentation ordnance;
- defeat ready-made striking elements (GGE) of the corresponding ammunition;
- defeat by a shock wave from high-explosive ammunition and their combined options;
- Shockwave defeat of volume-detonating ammunition.
The defeat by other types of exposure - laser radiation, chemical warfare agents, infrasound, microwave, radiation, etc., will be taken out of brackets, since they are not directly related to the subject under discussion.

Contradictory information is available on the effects on various parts of the body. Some sources suggest assessing the likelihood of damage based on the relative surface area of ​​the corresponding parts of the body. The head is about 7% of the total body area, neck - 1,5%, chest - 15%, stomach and lower back - 11,8%, lower limbs - 44%, upper - 20,7%, but this technique can hardly be considered completely justified due to the influence of the terrain and unequal mobility of different parts of the human body.

The distribution of wounds by parts of the body can be considered using the information from the manual for doctors “Field Surgery of Local Wars and Armed Conflicts,” but it reflects all injuries, regardless of whether they are bullet or fragmentation. And this is a very critical question, since fragments from the warhead of a rocket, shell, grenade or mines are distributed conditionally evenly, but firing with bullets is aimed precisely at the conditional center of the target (human body).

Field surgery of local wars and armed conflicts. Damage Localization Table
If we talk about the shock wave, then, despite the fact that its effect is on the entire human body, damage is primarily caused to the most vulnerable organs: the hearing organs and the lungs. Secondly, these are other abdominal organs and further, depending on the intensity of the impact of the shock wave. 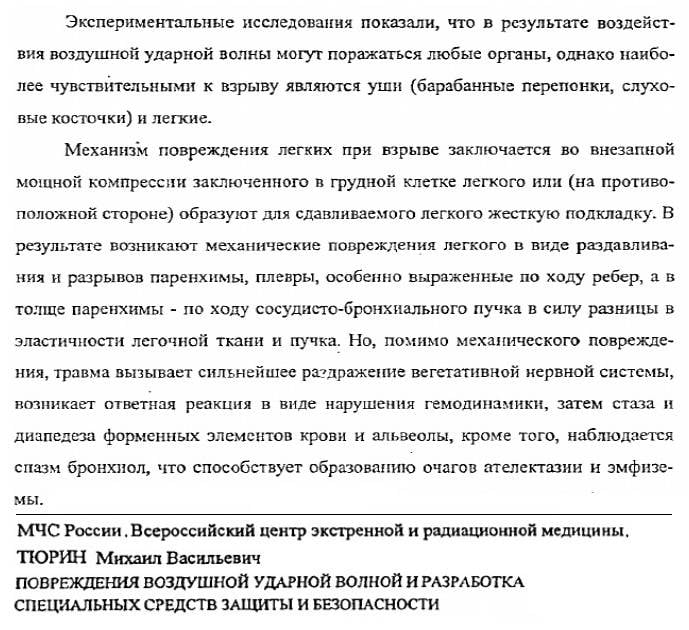 The fragments of various types of ammunition can vary greatly in size and weight. Some products, such as grenades for under-barrel or automatic grenade launchers, some hand grenades, have a warhead with fragments of knowingly small mass. Accordingly, the more fragments the warhead of a rocket / projectile / grenade / mine gives, the higher the probability of them hitting the target. 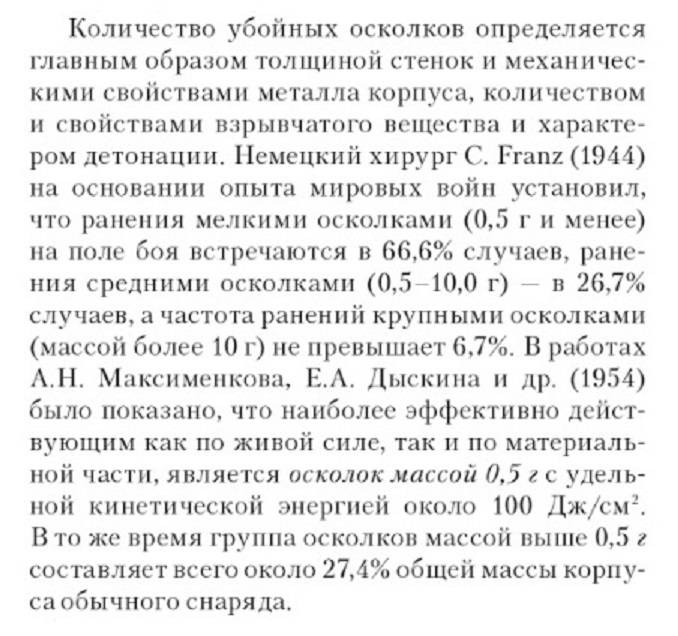 Field surgery of local wars and armed conflicts. Probability table for various types of fragments
Medical data that show the effectiveness of light fragments, primarily indicate that light fragments more often hit the target. It is logical, because if there is no hit, there is no injury / death, which in fact is reflected in medical sources.

What weapons effectiveness will decrease to a greater extent? If you look at the tables above, you can see that the greatest losses are caused by light high-speed fragments, which have the property of quickly losing speed with increasing distance. Such fragments give ammunition of the VOG-17 / 17M type for automatic machine-gun grenade launchers of the AGS-17/30 type, ammunition of VOG-25 / VOG-25P for the under-barrel grenade launchers, 30x165 mm shells of small-caliber automatic guns of the 2A42 type, grenades of the RGN type. 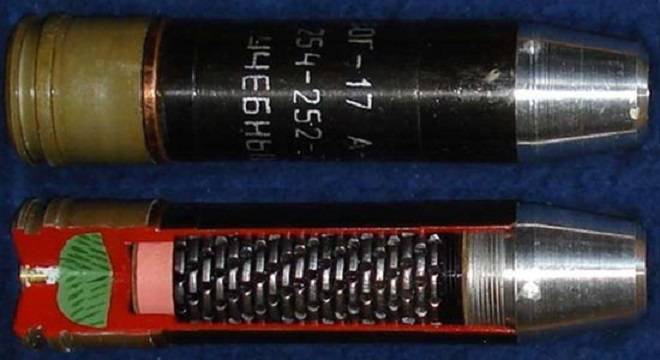 Layout of grenades for underbarrel grenade launchers of caliber 40 mm VOG-25 and VOG-25P
Protecting a fighter from a bullet, especially with a heavy armor-piercing core, is much more difficult than from a small-caliber fragment, which, according to medical sources, often has kinetic energy of the order of 100 J when it enters the body (this is the initial energy of the caliber .22 cartridge). Thus, to protect against such fragments, not only armor plates from existing and promising materials may be sufficient, but also solutions based on flexible materials that can cover the maximum surface area of ​​a fighter’s body.

Accordingly, the widespread introduction of promising NIB can lead to a significant decrease in the characteristics of these types of ammunition, if not to abandon them. In the compact dimensions of the ammunition of these calibres (30-40 mm) it is impossible to place a sufficiently large amount of material for large fragments or ready-to-use striking elements (GPEs) that can penetrate promising NIBs. And if you place a smaller amount, then the probability of getting fragments or GGE into the target will be significantly reduced. The high-explosive action of small-caliber shells is obviously small, however, and additional protection may be provided from it. This problem - the need to increase the mass and size of a fragment or ready-to-use striking elements will be relevant for larger calibers, advanced automatic cannons of 45-57 mm, and mortars of 60 mm caliber mortars. The smaller probability of a large fragment or GGE hit will have to be compensated by an increase in the accuracy of projectile guidance on the target, that is, most likely by the active introduction of guided ammunition, which are already being developed for these calibers, as we considered in the article 30-mm automatic guns: sunset or a new stage of development?

As for even larger ammunition, such as shells, mines, missile warheads, their effectiveness will significantly decrease. If we recall the distribution of the probability of defeating various types of fragments, taken from the book “Field Surgery of Local Wars and Armed Conflicts,” then small fragments (less than 0,5 g) account for 66,6% of the targets hit, and medium (0,5- 10 g) 26,7% and for heavy (more than 10 g) 6,7%. In this case, medium and heavy fragments account for 27,4% of the mass of all fragments generated during the explosion of a shell. The need for programmable fragmentation of the shell of the shell only on medium and large fragments, or the use of only shells with GGE, will reduce the likelihood of a single fragment or GGE in the target, which in turn will necessitate an increased consumption of ammunition or a wider use of expensive guided ammunition.

From body armor to armored suit

In recent developments in the NIB, there is a tendency to create equipment that completely covers not only the body, but also the head of the fighter. A helmet that has existed as an element of equipment for more than 100 years can be transformed into a fully enclosed armored helmet. How important is this item of equipment?

Protecting the fighter’s head is much more difficult than protecting the body, because, firstly, the severity of the protection lies literally on the fighter’s neck, and secondly, even if the ammunition with high kinetic energy does not break through the helmet / helmet armor, it can completely break the fighter spine. Thus, it will be possible to realize head protection from automatic / rifle bullets and massive high-speed fragments only in solutions based on an exoskeleton, which is a separate topic for discussion.

But even a helmet that does not provide protection from machine guns and rifle bullets can be extremely popular. First of all, we are again talking about light and, possibly, partly medium fragments. Protecting the face and neck from them can significantly increase the survival of fighters on the battlefield. Also, a closed helmet will effectively protect hearing organs and lungs from explosive action, and additional protection from the thermal effects of explosions will be provided. 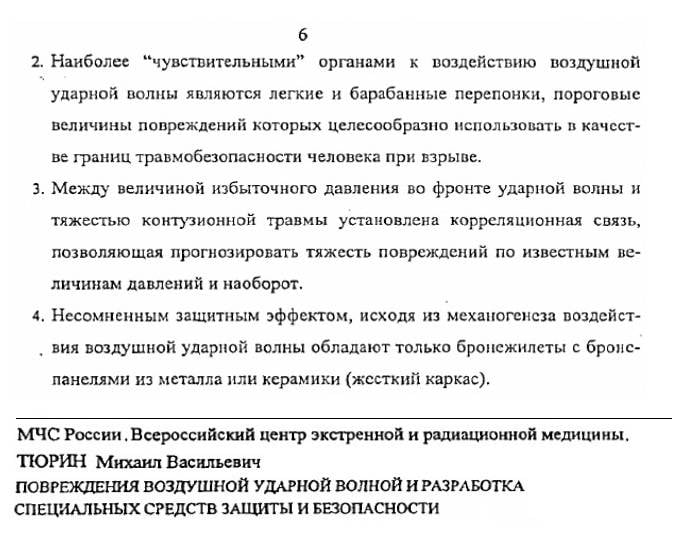 A relatively simple breathing system with a compact power source can provide forced air through a filter. On the one hand, this will allow the incoming air to be cleaned of dust and burning particles, on the other hand, a small excess pressure will provide the fighter with an additional portion of oxygen and will prevent unfiltered air from entering the helmet. The transparent visor of the helmet will protect the face and eyes from splinters and temperature effects. 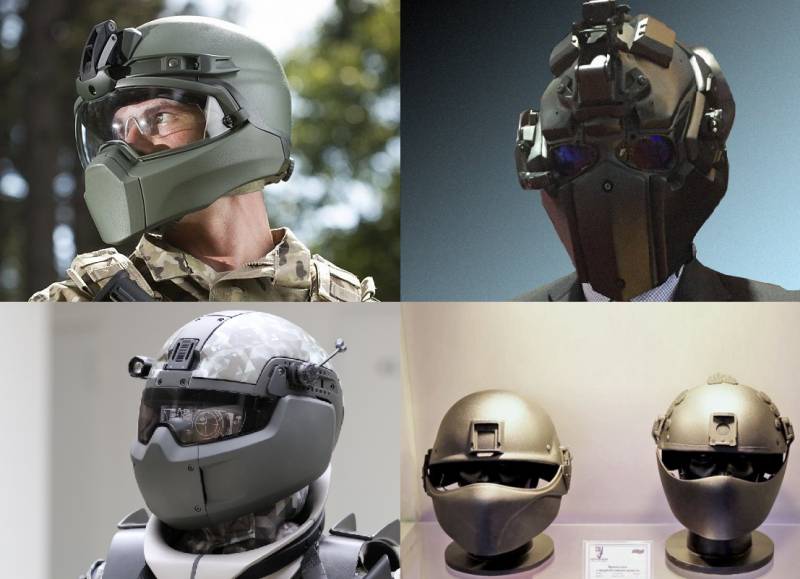 Clockwise above is the US Army’s electrified Heads-Up helmet with integrated display system, the helmet of a future Japanese soldier Devtac, the armored helmet of the Russian company Armocom and the concept of the helmet helmet of the promising Russian equipment Ratnik-3

Armored helmets are currently under development. There are some problems, such as the flow of a shock wave into the helmet and its re-reflection from the inner surface, but they will be solved one way or another.

In addition to the bulletproof helmet, an active framework can be implemented in promising NIBs. In the normal state, it can be flexible, not hindering the movement, but when it detects a shock wave (for example, by thermal sensors of an explosion burst), it is instantly fixed, protecting the lungs and other cavity organs.

It would seem that such elements of equipment as reconnaissance, control, navigation, identification and communication systems do not directly affect the probability of a soldier being hit by various types of weapons? However, upon closer inspection, this is not so. It is the improvement of the navigation subsystems, the identification and communication of the prospective equipment of a ground fighter, that will make it possible to split large units into small ones, without prejudice to ensuring their joint actions. Move apart - beat together. The supply of such units can be carried out by ground and air drones, containers on controlled parachute systems, dropped from stealth transport aircraft, including unmanned ones.

Where it leads? Moreover, the classic fighting will more closely resemble a high-intensity guerrilla war, in which professional men equipped with the latest technology will take the place of men in caps with earflaps with three-rulers. In fact, this is confirmed by existing realities, when in armed conflicts around the world more and more clashes occur with the participation of special operations forces operating in small, well-armed and organized groups.

In the context of the issue under discussion, this means a decrease in the efficiency of heavy equipment, providing fire damage to enemy forces due to the defeat of areal targets, since it is ineffective to expend wagons of missiles and shells for the sake of a unit, and the priority in this case will again turn to more expensive high-precision ammunition.

In all military conflicts of the 30th and 50st centuries, small arms are one of the most important tools of war, ensuring the defeat of XNUMX to XNUMX percent of the enemy’s manpower.

Introduction NIB from promising materials with an active skeleton, armored helmets that completely cover their heads, and the transition to the tactics of using small groups operating on the principle of "moving apart - to hit together" will increase the value of personal weapons of ground soldiers, which, of course, includes small arms. In this regard, we can expect a relative increase in combat losses inflicted by the enemy, namely, small arms, which confirms the advisability of carrying out developments in this direction and creating promising weapon-cartridge complexes at the modern technological level.

We are in Yandex Zen
The evolution of an automaton in the USSR and in Russia in the context of the American NGSW program
An-12 in Afghanistan
79 comments
Information
Dear reader, to leave comments on the publication, you must to register.