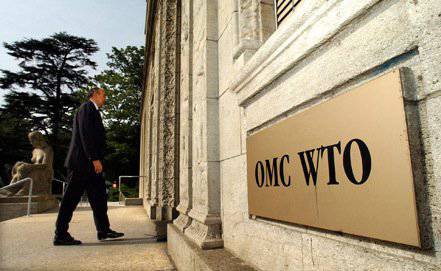 The Federation Council today ratified the Protocol of Russia's accession to the Marrakesh Agreement Establishing the World Trade Organization of April 15 of 1994.


This document was signed by 16 December 2011 of the year in Geneva during the plenary session of the Eighth WTO Ministerial Conference, the Minister of Economic Development of the Russian Federation and the Director General of the Organization. The signing of the protocol finally completed the 18-year period of negotiations held by Russia for accession to the WTO.

The protocol provides that Russia, as a WTO member state, assumes obligations under the Marrakesh Agreement with all the changes that were adopted by the members of the organization on the date of the entry into force of the protocol on Russian accession. Currently, WTO members are 155 states.

"The text of the Protocol, which fixes the agreement on Russia's accession to the WTO, is attached to the list of commitments of the Russian Federation for access to commodity markets and services markets, including the list of exemptions from the most favored-treatment regime for services," said Andrei Belousov, the Minister of Economic Development, earlier. - Obligations according to the acceptable level of support for agriculture in the framework of the so-called yellow basket / this is support that has a distorting effect on trade - ed. /, on export duties, on tariff quotas also on included in the list of commitments for goods. In addition, the text of the Protocol refers to the obligations listed in paragraph 1450 of the accession working group. " The protocol, its annexes and the obligations listed in the relevant paragraph of the report of the working group are collectively legally significant elements of the package of documents submitted for ratification, the minister explained.

The list of concessions and commitments of Russia for goods covers more than 11,5 thousand tariff lines, consolidates the results of bilateral and multilateral negotiations on market access of goods, including obligations for export and import duties, amounts of agricultural support, tariff quotas, and export subsidies in agriculture.

The list of Russia's specific obligations on services, which contains a list of exemptions from the most-favored-nation treatment, summarizes the results of bilateral negotiations with interested WNO member countries of 30. In total, the agreements cover the 117 sectors / the WTO altogether allocates more than the 150 services sectors /. And in the 39 sectors / including pipeline, railway, inland waterway transport, most medical services, etc. / Russia does not take on obligations. After accession to the WTO in these sectors, any restrictions may apply to foreign service providers, up to the full closure of the market, provided that the obligations to provide the most-favored-nation treatment are not violated.

Ratification of the protocol will entail the need to pay a one-time fee and annual membership fees of the Russian Federation to the WTO. After ratification of the protocol, a budget allocation in the amount of 2012-175 thousand Swiss francs will be required for the payment of a one-time fee and 200 million Swiss francs / according to preliminary estimates / for the payment of the annual contribution for the second half of 1,75. At the same time, since at present the Russian Federation has the status of an observer of the WTO, in the 2012 year it is also necessary to make a contribution of the observer in full - 2012 thousand Swiss francs. When joining during the year, the balance of the fee will be proportionally deducted from the membership fee. The corresponding funds in the federal budget are already provided.

In addition, according to preliminary estimates, the implementation of Russia's commitments related to membership in the WTO, will lead to a reduction in revenues to the federal budget due to lower rates of customs duties. Belousov said that direct budget losses from a reduction in import duties could amount to 2013 billion rubles in 188, and 2014 billion rubles in 257. "However, we proceed from the fact that real budget losses will be significantly lower due to the growth of trade, and hence the taxable base, and due to the increased collection of duties, which is directly related to their level," he said.

Recognizing that entry into the WTO carries certain risks for a number of sectors of the Russian economy, the Federation Council nevertheless believes that the country has no alternative to joining the Organization. According to Andrei Molchanov, chairman of the Federation Council’s Economic Policy Committee, the accession of the Russian Federation to the WTO will ultimately "become an incentive for increasing labor productivity and the efficiency of domestic production." Speaker Valentina Matvienko earlier assured that the Federation Council will actively monitor the consequences of joining the WTO in the regions and, if necessary, “promptly develop appropriate legislative response measures,” a temporary commission set up in the chamber is called upon to deal with.

Ctrl Enter
Noticed oshЫbku Highlight text and press. Ctrl + Enter
We are
RF ratified the protocol on accession to the WTO
28 comments
Information
Dear reader, to leave comments on the publication, you must to register.