First in their classes. How were China's strategic nuclear forces built? 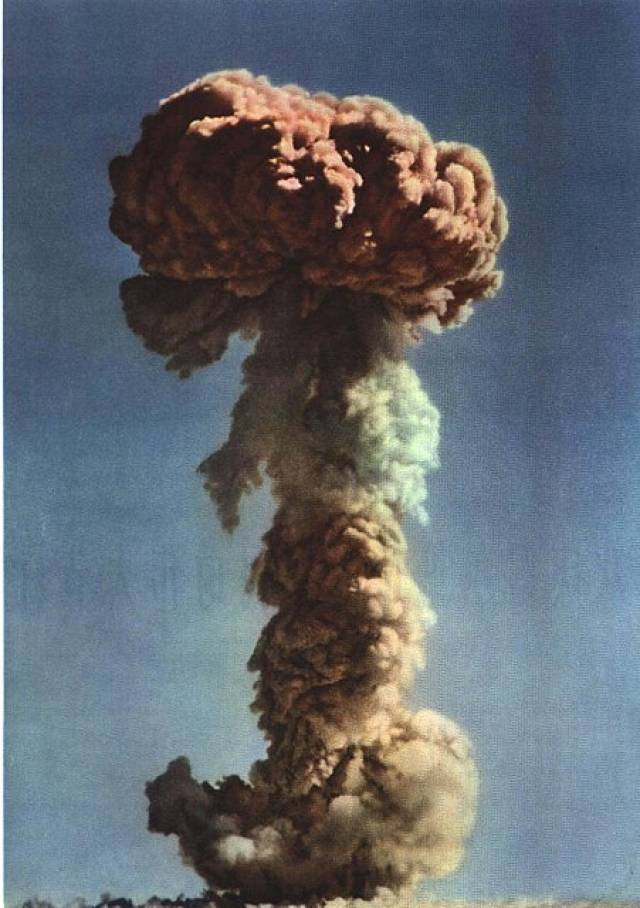 Cloud after the explosion of the first Chinese atomic bomb, October 16, 1964. Photo by Wikimedia Commons

In 1956, the PRC launched its own nuclear program, and on October 16, 1964, conducted the first successful tests of a real charge. After that, the Chinese army took up the construction of its own strategic nuclear forces and eventually managed to create a full-fledged nuclear triad. Now in the strategic nuclear forces of China there are all three components, the creation of which took a lot of time.

China's nuclear program started in 1956 by decision of the CPC Central Committee. In the first few months after its adoption, the necessary state bodies and special-purpose enterprises were formed. They had to conduct research and build a promising weapon.

However, the lack of experience and competencies made Beijing turn to Moscow for help. In the second half of the fifties, about 10 thousand Soviet specialists visited China and rendered this or that help. In addition, a comparable number of Chinese scientists and engineers have been trained in our country. However, already in 1959-60. cooperation was curtailed, and Chinese science had to continue to work independently.

The first real results appeared a few years later. On October 16, 1964, a test with the code “596” was held at the Lobnor training ground - this was the first Chinese atomic bomb. On June 17, 1967, China experienced the first thermonuclear warhead. 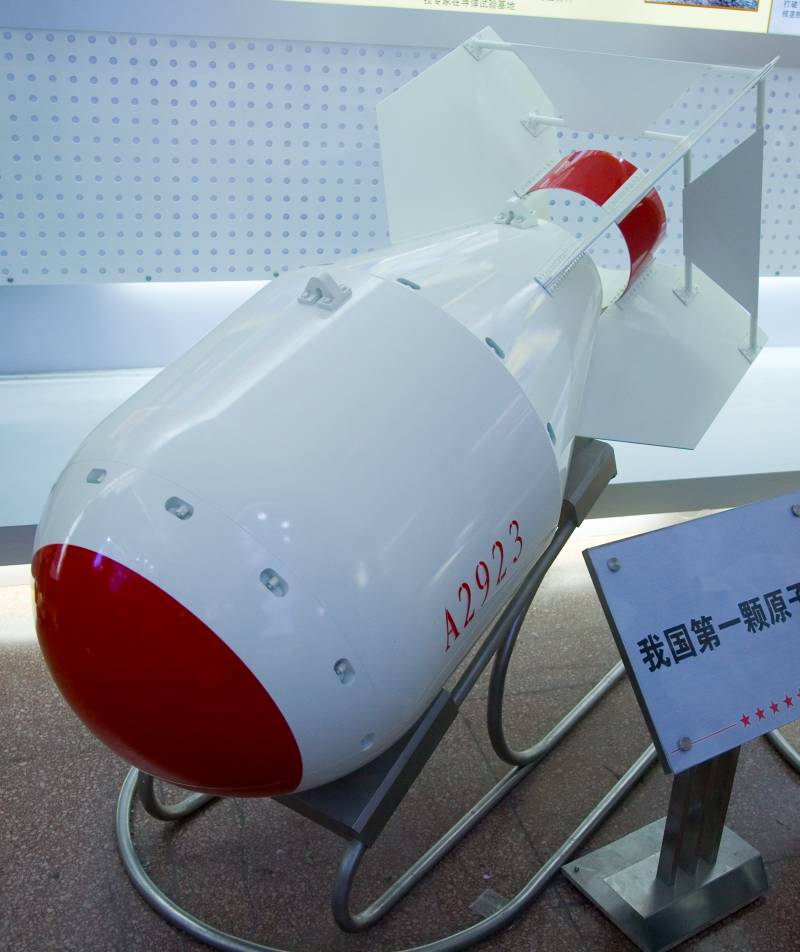 Model of the bomb used in the tests "596". Wikimedia Commons Photos
According to the results of these events, the PRC became the fifth country in the world to receive nuclear weapons, and the last of the "old" nuclear powers. In addition, China became the fourth owner of thermonuclear weapons. Thus, China in terms of technology development was on a par with the leading countries of the world. However, to obtain all the desired results, it was necessary to build delivery vehicles - and with them full-fledged strategic nuclear forces.

Bomb in the air

Like other countries, China began the construction of a future nuclear triad with the creation of an air component. It is curious that the first carrier of the Chinese atomic bomb also had Soviet roots. In the late fifties, the USSR handed over documentation to the PRC on the Tu-16 long-range bomber.

The production of this machine was established under the designation Xian H-6. The first flight took place in September 1959, and soon serial aircraft went into the army. Initially, H-6 could only carry conventionally falling conventional bombs. There were no special ammunition or missiles at that time. However, the Chinese aviation industry worked on the further development of the weapons complex.

On May 14, 1965, at the Lobnor training ground, the first test of a nuclear bomb took place with a drop from a carrier aircraft. The weapon used a specially equipped H-6A with a set of necessary equipment. Two years later, a similar aircraft provided the first tests of thermonuclear weapons. By that time, the H-6A went into production and began to enter service with aviation units. 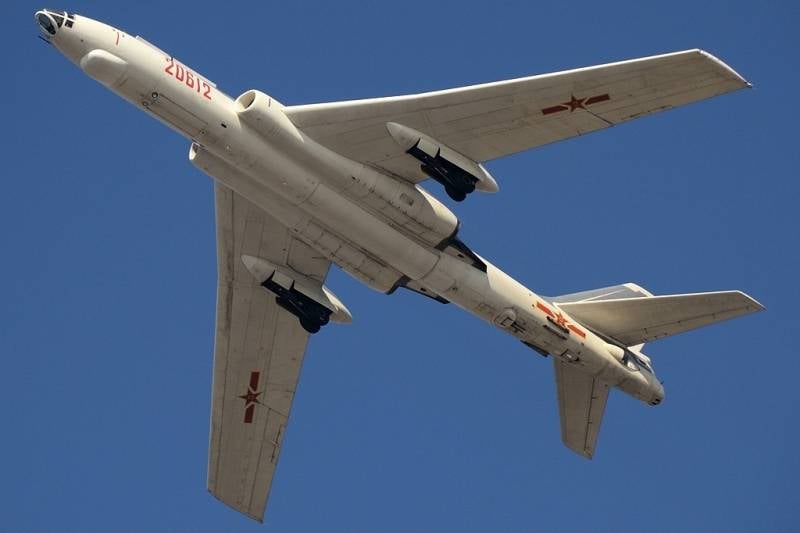 Xian H-6A bomber in flight. Wikimedia Commons Photos
Thus, it was the H-6A bomber that became the first delivery vehicle of the Chinese strategic nuclear forces. In the future, new products appeared, but the H-6 retained its role. The bomber has been repeatedly upgraded and continues to serve until now. Modern versions of the H-6 continue to solve the problems of nuclear deterrence using current types of weapons.

However, strategic aviation has long ceased to be the basis of strategic nuclear forces. The reason for this was the appearance of other delivery vehicles, as well as the relatively small number of aircraft. The total release of H-6 bombers did not exceed 180-190 units, and far from all of them are capable of carrying special ammunition.

Soviet scientific and technical assistance also affected the field of rocket technology. The USSR handed over documentation on several old ballistic missiles and the necessary technology. Based on the data, China began developing the Dongfeng (East Wind) family of missiles.

At the end of the fifties, China copied the Soviet liquid-fuel tactical missile R-2. A copy called "Dongfeng-1" was first tested at the Shuangchenzi training ground in November 1960. Subsequently, this product went into a small series and was limitedly operated by the PLA. Since nuclear weapons were in development at that time, Dongfeng-1 could only carry a conventional warhead.

Dongfeng-2A infantry fighting vehicle in preparation for launch. Photo Sinodefence.wordpress.com
Using existing experience and Soviet technology, the Dongfeng-2 rocket was created in the same period. It was already a medium-range ballistic missile (up to 1250 km), potentially capable of carrying a special warhead. The first launch of such a ballistic missile took place in March 1962, but ended in an accident. An analysis of the results of this incident led to the emergence of an improved Dongfeng-2A project. This product has been successfully tested since June 1964.

On December 27, 1966, the PLA conducted the first launch of the Dongfeng-2A missile with a monoblock nuclear warhead. The rocket took off from the Shuanchenzi training ground and delivered a warhead with a capacity of 12 kt TNT to the target at the Lobnor training ground. Firing range was 800 km.

After some modifications to the rocket itself and combat equipment, the latest strike complex was adopted by the newly formed 2nd PLA artillery corps. Dongfeng-2A missiles remained on duty until the early eighties, when they were replaced with newer systems. Further development of the ground component of the Chinese strategic nuclear forces was carried out due to new Dongfeng missiles. Moreover, products of different generations were united only by the name.

"Big Wave" in the ocean

The marine component was the last in the Chinese strategic nuclear forces. Work on its creation started later than others and gave a result relatively recently. The first submarine-carrying ballistic missiles with nuclear military equipment did not go on duty until the end of the eighties. Not only that, and now the marine component is not large and noticeably loses to foreign nuclear fleets. 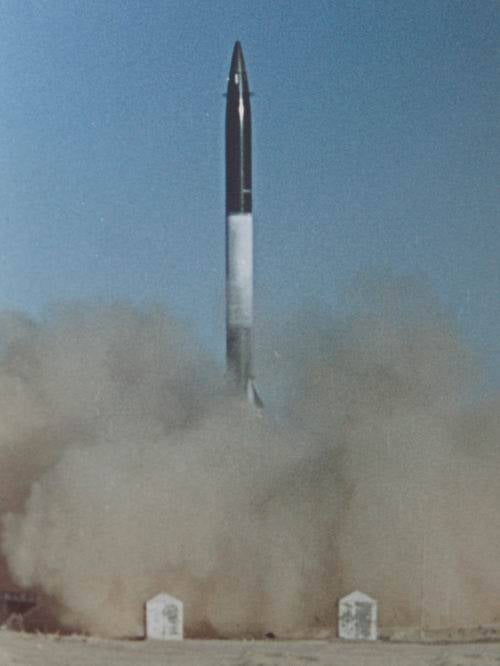 Launch of the Dongfeng-2A missile with military equipment, December 27, 1966. Photo by Sinodefence.wordpress.com
The first Chinese SSBN project was developed since the late sixties and wore the code "092". Due to the high complexity, the work dragged on, and the laying of the first and only ship of this type took place only in 1978. In 1981, Project 092 boat was launched. After this, several years had to be spent on testing and fine-tuning both the boat itself and its main armament.

Work on the topic of ballistic missile submarines began simultaneously with the design of the future SSBNs for them. Initially, it was planned to build SLBMs based on one of the Dongfeng family missiles, but then decided to do it from scratch. The project "Tszyuylan-1" ("Big Wave") offered a lot of bold and complex solutions, but allowed to obtain more interesting results.

The development work on Tszyuylan-1 continued throughout the seventies and was accompanied by some success. So, in 1972 they made a throw launch from an experimental submarine, and later some on-board systems worked out.

The only SSBN pr. 092 and its crew. Photo Sinodefence.com
On June 17, 1981, Tszyuylan-1 SLBM made its first launch from a ground-based testing complex. On October 12, 1982, the first launch from an experimental carrier boat took place. According to the results of the ROC, a missile was created with a range of 1700 km and the possibility of using a monoblock warhead with a capacity of up to 300 kt.

On September 28, 1985, the first launch of the rocket from the submarine, Project 092, ended in an accident. In September 1988, the regular carrier performed two successful launches. According to their results, the submarine and the rocket were recommended for acceptance into service and put on duty.

According to various sources, the complex in the form of SSBNs pr. 092 and SLB “Tszyuylan-1" was not fully combat-ready and could not carry full combat duty. The constant presence of the marine component in the seas was achieved only with the advent of the new SSBNs of project 094. Nevertheless, the first step in the construction of the marine component of China’s strategic nuclear forces was precisely “092” and “Juulan-1”.

China became a nuclear power 55 years ago, and during this time managed to build a full-fledged and combat-ready strategic nuclear forces. The first stages of construction were carried out with the direct support of Soviet specialists, after which they had to do it only on their own. Limited opportunities and the need to develop competencies led to delayed work and rather modest end results. 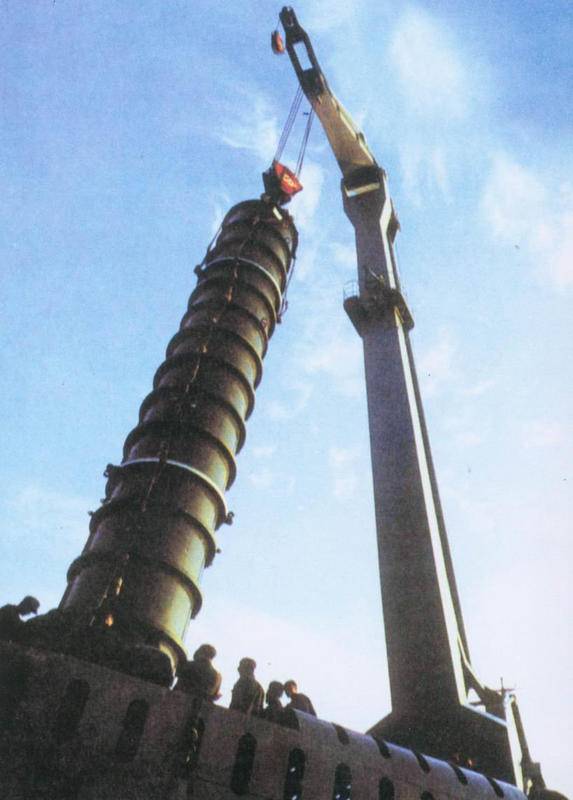 Loading the rocket "Juilan-1" on board the carrier. Photo Sinodefence.com
According to the results of the first 55 years of its existence, the Chinese strategic nuclear forces look developed, but not without flaws. The ground component, equipped with ballistic missiles of various classes, up to full-fledged ICBMs, looks the most combat-ready. Strategic aviation has less potential and does not differ in high numbers. Moreover, for half a century, it has been based on aircraft of the same type, although of different modifications. The marine component is also small in number, but has the necessary weapons in significant quantities.

China’s nuclear triad is not the largest and most powerful in the world, but is one of the three leaders ahead of some other developed countries. The missile forces, long-range aviation, and the PLA’s submarine fleet are capable of solving the tasks of strategic deterrence, and China is doing everything possible to develop them. This means that the H-6A with free-falling bombs, Dongfeng-2A, Type 092 and Juilan-1 proved to be a good foundation for further construction.