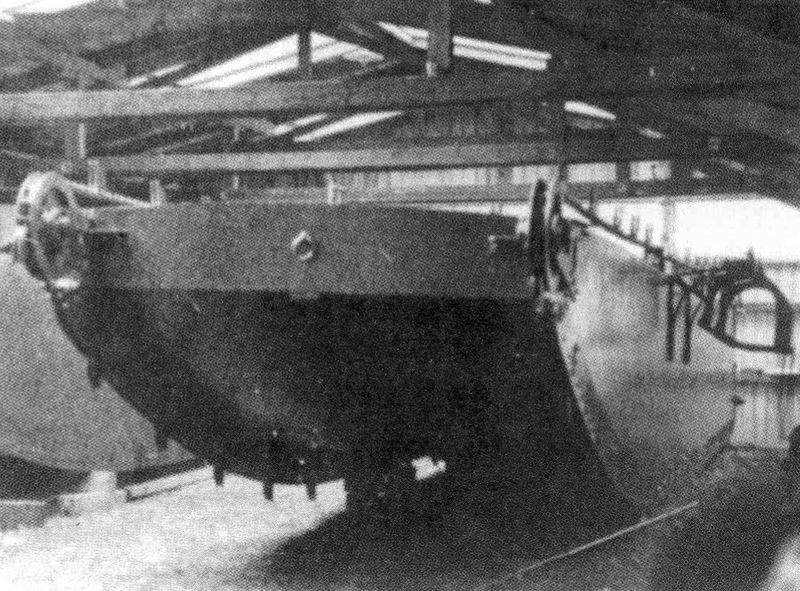 
The First World War was burning. Italy, despite being a member of the Triple Alliance, a few months after the outbreak of hostilities took the side of the Entente. The sense of justice didn’t sleep here, just imperial ambitions demanded an increase in territory at the expense of the former ally. In this case, due to Austria-Hungary.

Naturally, the Imperial and Royal Naval Forces of Austria-Hungary became an adversary of Italians in the Mediterranean. The main naval empires overlooking the Adriatic Sea were located in Trieste (Italy), Paula (now Pula) and Split (Croatia). At the same time, it was Trieste that was promised by the Entente to Italians as prey, who considered this city their own, although it was already famous as the capital of the "Austrian Riviera".

Soon, the Austro-Hungarian fleet was simply locked in its harbors. For the most part, this was a consequence of the fears of Auto-Hungary’s own command to lose ships in a collision with the combined squadron of the British and Italians. However, the Allies in the person of the Italians were in no hurry to lure the enemy fleet and get the prospect of being beaten. In addition, the Austro-Hungarian fleet, which was under the cover of coastal artillery, was, indeed, even glad the Italians appeared on the horizon. After all, this promised their enemy certain death. 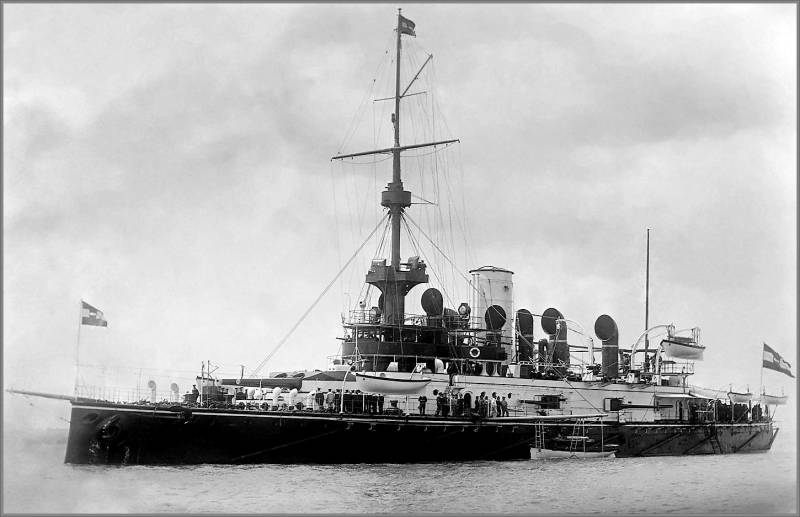 Sunk by the Italians "Vienna"
As a result, the Italian command made the only right decision: use sabotage tactics. Thus, in December 1917, two Italian torpedo boats entered the harbor of Trieste, sinking one battleship of the coastal defense "Vienna" (SMS "Wien"). The vulnerability of the bases became obvious to the Austrians, therefore, the protection was significantly strengthened. Repeating the attempt seemed impossible.

To help my family the fleet came the founder and chief engineer of Societa Veneziana Automobili Navali (Castello, Venice) Attilio Bizio, specializing in the development of boats, including torpedo boats. It was he who proposed a very original design of a torpedo boat that can overcome powerful barriers at the entrance to the bay without the need to cut them and attract extra attention. The highlight of Bizio's flat-bottomed boat was the presence of two tracks on both sides. They were a closed chain with spikes, laid on a kind of rails and rotating on special gear pulleys, similar to rollers. 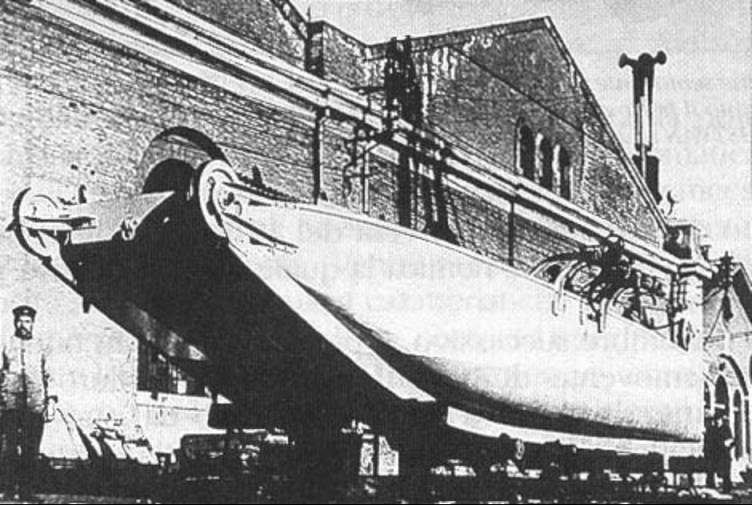 Italian command, preferring to wage war on the sea with small forces, instantly grabbed at such a bold proposal of Bizio. The Italian warlords still dreamed of memories of the successful and cost-effective sinking of the "Vienna" with inexpensive MAS torpedo boats (Motoscafo armato silurante).

Four boats were ordered, which were called "boats-tanks", Then" jumping boats. " As a result, the "jumping" nature left its mark in the name of the boats: Grillo ("Cricket", the head boat of the series), Cavalletta ("Grasshopper"), Locusta ("Locust") and Pulce ("Flea"). This swarm of insects was ready by March 1918 and was once again painfully stung by Austria-Hungary.

On April 14, two "boat-tanks" Italian destroyers launched into the sea, because the seaworthiness of new products was zero. Cavalletta and Pulce arrived at Paul's harbor. Despite the fact that the boats were looking for a safe passage to the enemy port for a long time, the miracleweapon failed to manifest itself. In addition, it began to get light. Fearing that slow-moving towed "tanks" would delay the destroyers, drawing the attention of large Austro-Hungarian naval forces to them, the commanders simply flooded the boats and left at full speed from the enemy shore. 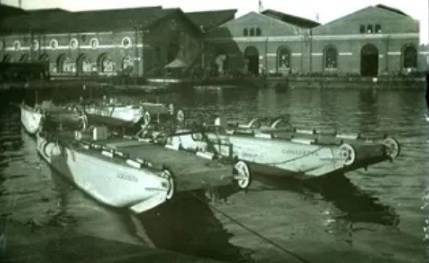 "Tanks" at the pier
The second attempt was made from May 13 to May 14, 1918. Grillo went under the command of Mario Pellegrini into the sea, accompanied by five destroyers. The boat was able to quietly go straight to the boom barriers of Paul's harbor thanks to the almost silent engines. However, at that moment a ray of searchlight pulled them out of the darkness. Mario turned out to be not a timid dozen and, having overcome, as planned, the barriers, rushed to the attack.

Soon, the base ships were already frantically firing at the intrusive “insect” with a deadly sting. The shot through hull began to take onboard water when Pellegrini fired torpedoes. Despite the captain’s courage, the torpedoes did not find the target. According to one version, due to the fact that the crew did not put them on a combat platoon (!). As a result, the boat sank, the crew was captured, and the destroyers barely had time to leave. 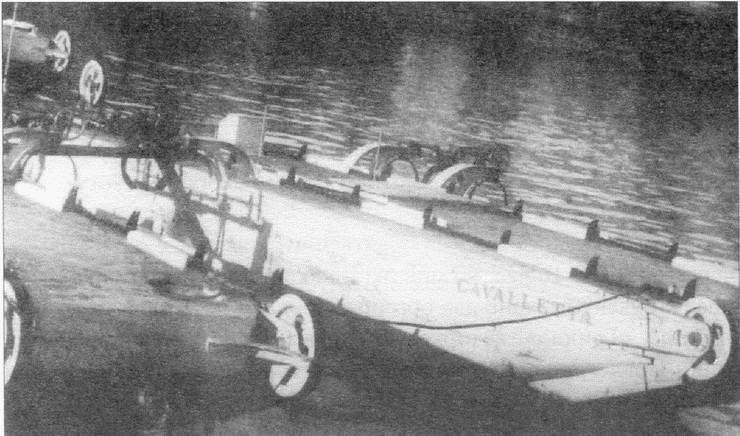 Cavalletta crew flooded
The third attack was launched on Trieste on May 15th. Locusta only managed to approach the harbor when the boat was illuminated by searchlights. Without persisting, the team quickly retreated as much as possible, given the speed. The Italians did not undertake more serious operations with the use of “tanks,” but this did not stop the Austrians from taking the slow-moving swarm of insects more than seriously.

The decrepit empire rated the Italian engineering survey quite high. Flooded at Paul Grillo was neatly raised and comprehensively studied. Of course, the secret “boat tank” could not be restored. Bursts of shells and machine-gun fire shredded a wooden case. In addition, before being captured, Pellegrini managed to activate the charge of self-destruction. 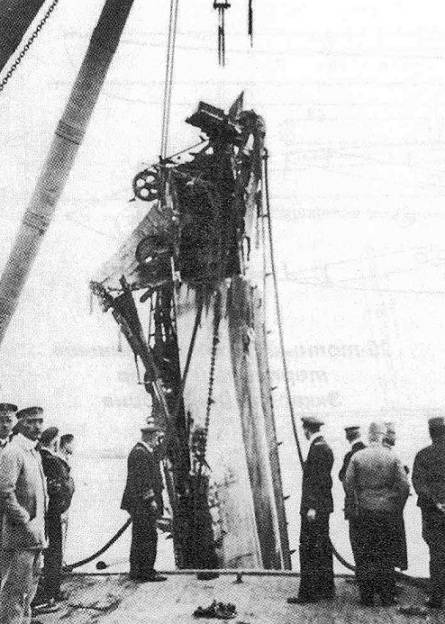 Therefore, the fleet command ordered two analogues of the Italian boat, named Barrikadenkletterboot, at the Fritz Eppel shipyard in Vienna. The shipyard had already established itself in the field of construction of small warships for the Austro-Hungarian fleet. By July 1918, Eppel’s company had drawn up a general drawing of the boat and began construction. 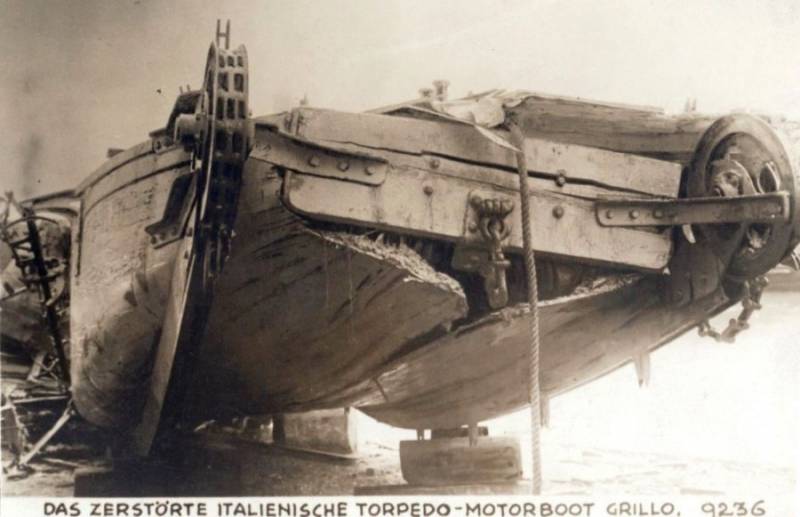 In the fall, tests of the first sample were carried out on the Danube. During the tests, the high ranks of the imperial fleet of Austria-Hungary were present, including Admiral Franz von Golub and senior naval adviser to Emperor Charles I Franz von Keil himself. The boat showed itself with dignity, overcoming various kinds of barriers, and made a great impression on the present senior officers.

The armament was of the same type - 450 mm torpedoes. The crew also consisted of three people. 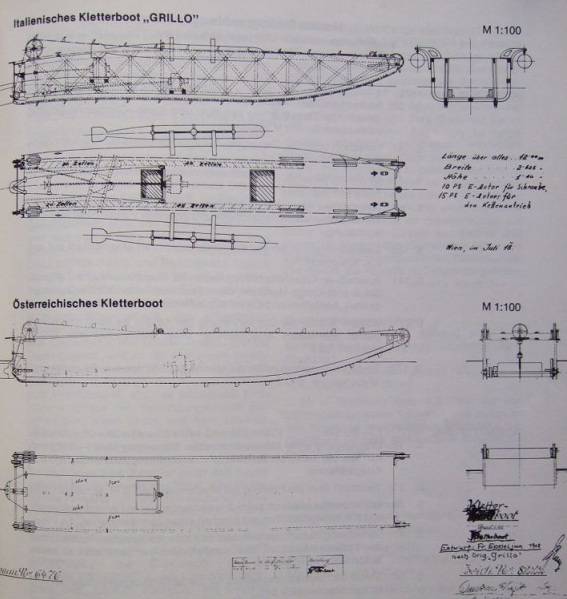 Boat drawing drawn at Eppel's shipyards
Fast enough for two ready-made boats to pick up the target. The boat, named Mb.164, was supposed to attack the base in the port of Ancona, and Mb.165 received as a target a small port of Chioggia (a commune just south of Venice). On October 20, they even managed to deliver the Mb.164 boat to the railway station in order to transport it to Paul’s base, which just twice became the target of these “boat boats”. But the Austrian revenge was not destined to take place. On October 30, the command canceled the operation.

In late October, the centrifugal forces of Austria-Hungary began to break up the country in parts. Czechs, Slovaks, Hungarians, Poles and other citizens all pulled the blanket over themselves. On November 1, 1918, Charles I abdicated. And in less than a year, the miracle weapon in the form of “boat-tanks” was quietly disassembled into pieces.