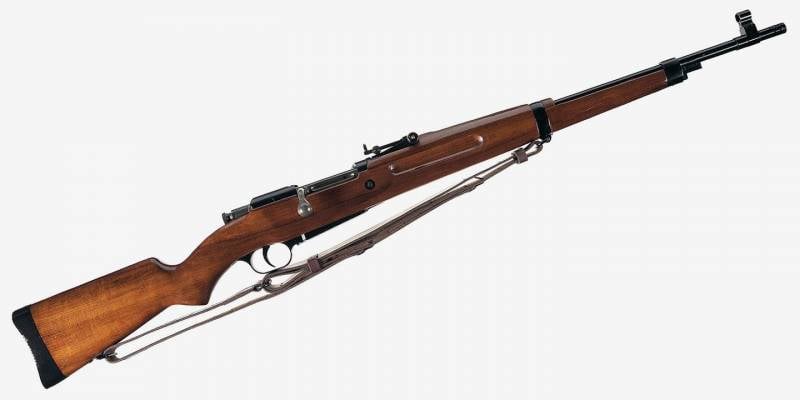 The end of World War II marked the end of the era of infantry store rifles. All the more surprising was the attempt by the Danes to jump into the last car of the departing train, which predictably ended in nothing. This happened for a number of objective reasons. At the same time, the Madsen model 1947 rifle with a manual reload and a 5-round magazine was a good example of a rifle weapons, just the time for such models really passed.

World War II was the last war in which the main infantry weapons of almost all the warring parties were store rifles. In the Soviet Army, this is the famous three-ruler, the Mosin rifle of the 1891/30 model; in the German army, the Mauser 98k magazine rifle; in the British army, the Lee Enfield magazine rifle. Moreover, already during the war years there was a trend towards the transition of infantry units to self-loading (semi-automatic) and automatic models of small arms. For example, in the Red Army back in 1941 there were more than a million self-loading rifles SVT-40, earlier models SVT-38, as well as AVT-40. And the U.S. Army entered the war with a self-loading rifle M1 Garand, adopted in service in 1936.

Thus, the end of World War II only marked an emerging trend. All armies of the most developed countries of the world were massively re-equipped with new infantry weapons - self-loading rifles and automatic infantry weapons. At the same time, developing countries or, as they were called, countries of the “third world” often could not afford modern models of infantry weapons, which often were quite expensive. Unable to buy automatic weapons abroad, and without a developed industrial base that would allow serial production of their own assault rifles, such countries were forced to purchase simpler weapons.

This situation seemed to some companies attractive enough to bring to the market new models of magazine rifles. One of the companies that continued to work in this direction after the end of World War II was the famous Danish arms company Madsen, which at one time glorified itself by creating the first stories light machine gun, one of the first buyers of which was the Russian Empire. After the end of the major war in Europe, the Danish gunsmiths rushed to catch up. Their idea was quite simple. They hoped to develop a new lightweight store-based infantry rifle aimed at mass export. The countries of buyers of such weapons were the states of Latin America, the countries of Asia, and Africa.

Representatives of the arms company Dansk Industrie Sindikat "Madsen" AS completed the development of a new infantry rifle in 1947. However, the new store-borne infantry rifle, designated Madsen model 1947 or Madsen M1947, predictably did not arouse interest among buyers. Developed countries no longer needed such weapons, and developing countries did not show due interest in the model, to which there was a simple explanation.

The thing is that Danish entrepreneurs did not learn one important nuance. After the fading battles of World War II, huge stocks of small arms remained in the arsenals of the howling countries. They were sold at bargain prices on the international market, with countries often supplying old store rifles at no cost to their new ideological allies around the world. For this reason, the first and only buyer of the Madsen M1947 rifle was found only in 1958. A decade after the creation of five thousand of these rifles bought the naval forces of Colombia. And the total production of Madsen M1947 rifles did not exceed six thousand pieces. At the same time, most of the rifles delivered to Colombia did not last long in the fleet, almost all of them were soon transferred for sale on the civilian market.

Created by Danish gunsmiths in the second half of the 1940s, the Madsen model 1947 rifle claims to be the last store-mounted infantry rifle with a longitudinally-sliding bolt. In the future, the “boltoviks” will remain only the weapons of snipers, and all the infantrymen will switch to self-loading models and automatic weapons. In the directories of the Danish company, the new rifle, also known as the Madsen M47, took place under the designation "The MADSEN Lightweight Military Rifle", that is, the Madsen light army rifle. According to the idea of ​​the Danes, she was to completely oust the German Mauser 98k rifles from the market.

A distinctive feature of the Danish rifle was its small-sized mass and weight characteristics. In the advertisement that accompanied the production of the Madsen M47, it was even indicated that this model was designed for fighters of a small physique. It is worth noting that this was not an empty marketing move. The rifle was indeed light and compact, surpassing all magazine rifles of previous series. The weight of the model without cartridges was only 3,65 kg, and the total length was 1080 mm. At the same time, the designers achieved similar values ​​not to the detriment of the small arms quality, the rifle received a barrel length of 595 mm. For comparison, the Mauser 98k rifle, with which the Wehrmacht soldiers fought the whole war, had a barrel length of 600 mm. Moreover, both models in the Russian classification would be considered lightweight rifles. Madsen M47 looks good in terms of weight and size characteristics even against the background of modern Izhevsk hunting rifles. For example, Baikal 145, a classic hunting rifle with manual reloading, Moose without cartridges weighs 3,4 kg, and its maximum length is 1060 mm with a barrel length of 550 mm.

Structurally, the Danish post-war rifle Madsen model 1947 was a classic representative of store rifles. The rifle was equipped with a longitudinally-sliding bolt, weapons were reloaded manually after each shot, the barrel was locked by turning the bolt. At the rear of the bolt of the Madsen M47 rifle were combat stops, which reduced the stroke of the bolt when reloading weapons. The creators of the rifle took care of extinguishing the recoil energy. To do this, a muzzle brake appeared on the barrel of the weapon, and on the back of the butt appeared a shock-absorbing pad - a rubber butt plate.

The rifle was equipped with box magazines, designed for 5 rounds. The store was integral, it was equipped with an open shutter, either from a cage or with individual cartridges. Together with the rifle, the .30-06 Springfield cartridge (7,62x63 mm) was used, which was the main rifle cartridge of the US Army in the first half of the 20th century. The cartridge remains very popular and widespread today, but already as a hunting munition and a cartridge for sports shooting. The stated rate of the rifle was up to XNUMX rounds per minute, of course, you could almost forget about careful aiming. It is worth noting that the Danes themselves were ready to produce a rifle for other common ammunition, but they did not receive orders.

All rifles received standard open sights and a front sight placed in a ring to protect it from damage. The open sight had markings for firing at a distance of 100 to 900 meters. Naturally, to hit the target at a distance of 900 meters was not easy, but when installing optical sights on the rifle, such a task became quite feasible. Normally, all models of the Madsen model 1947 light infantry rifle were equipped with a belt and a bayonet-knife.

The rifle Madsen model 1947 is a very good example of small arms, which appeared late for 15-20 years. This lost time did not allow the model to take its rightful place in the market. Moreover, all owners of this weapon speak about the rifle only positively. The rifle has a good and thoughtful design, very high-quality assembly, as well as low weight, which is an important advantage of the model. A small mass puts this bolted infantry rifle on a par with hunting rifles, allowing the owner to easily make multi-kilometer marches in any terrain. 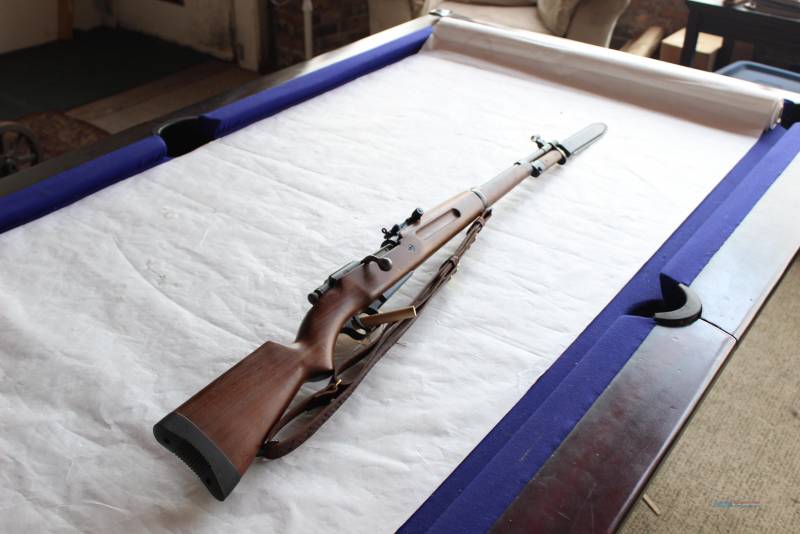 Allocate arrows and the safety of such rifles. Since most of them were practically not used in the armed forces, the safety of surviving samples is very high. They didn’t shoot a lot of rifles, they were not in the hands of conscripts, they didn’t take part in military operations and field exits, so today experts call the Madsen model 1947 one of the best-preserved longitudinally-sliding bolt-action store rifles. However, given the small volume of the released series, acquiring such weapons is not so simple. You can't find a rifle in ordinary stores, the model only occasionally appears at online auctions. Moreover, often the price of such rifles exceeds $ 1000.