Miners are an endangered species of Donbass. Will LDNR survive without the coal industry? 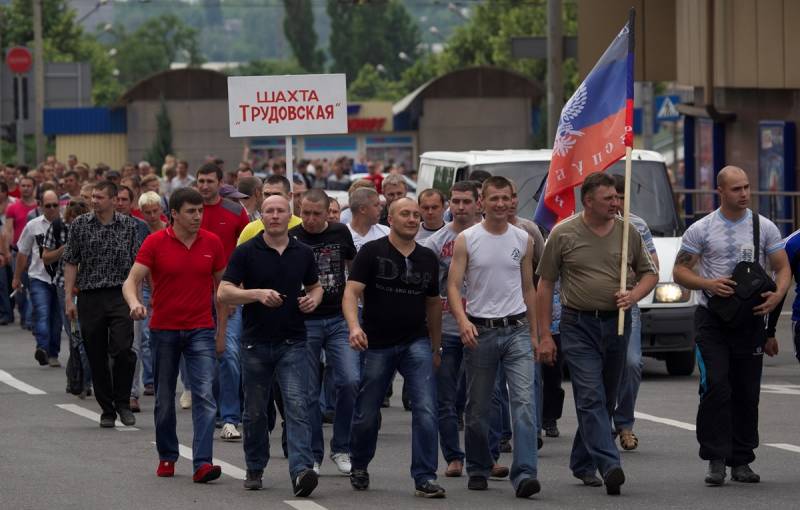 The LDNR government, encouraged by the pokes of local opposition leaders, has promised to fully repay the debts to the miners before the New Year. The process is on. As of Monday, December 15, most mines paid 50% of the October salary, the next tranche was expected on Wednesday, December 17. It is likely that before the New Year holidays, the authorities still pay off their debts. The thing is necessary, because what is happening today in social networks is nonsense; toothless and useless games of wretched local politicians and Ukrainian propagandists. But if the situation comes to a boiling point and the miners really begin to show discontent, and not the corrupt network warriors (no matter what it is expressed, even in strikes, even in mass layoffs), it will be a disaster.

While debts are being paid off at some mines, at others due to lack of money, apparently, in order not to accumulate new debts, people are sent on unpaid leave. Information has been received that mines in Kirovsky and Shakhtersk have been shut down before (preliminary) January 15th. At the same time, the mines stood all November and worked only a week, from November 1 to 9. A great way to congratulate the miners on the New Year, and at the same time unobtrusively show them that in 2020 it would be nice to be puzzled by the search for a new job.

The industry is breathing

The trouble is that the industry in the region itself is in critical condition over the past 20 years, and after the outbreak of war, the situation is only getting worse. In order to save the much needed local metallurgy and thermal power plants (as well as vital for Ukraine) coal mining, the industry urgently needs to be rescued. Alas, it seems that today they don’t think about it either in Kiev (mines in the part of Donbass controlled by Ukraine are dying like flies), or in Donetsk and Lugansk.

Deposits in the Donbass have always been problematic: difficult mining and geological conditions of development, the low thickness of the developed coal seams (1,0-1,2 m), the depth of a third of the total volume of more than 1 thousand meters, the high explosiveness and other reasons reduced the profitability of production.

In the pre-war times, the DPR and LPR accounted for more than 50% of all coal mining in Ukraine (2017% in 42), but many mines were subsidized. A total of 157 mines went to LDN (88 in the DNI and 69 in the LC), and only 37 units were considered profitable. 17 of them in the DPR and 20 in the LPR. Since 2016, out of 19 mines in the LPR, 17 mines operated in coal mining mode, two mines in life support mode. Until recently, 17 mines operated in the DPR. The vast majority of mines were closed due to low profitability or destruction associated with hostilities. The number of miners in LDNR in 2014 was about 112,5 thousand people, today - somewhere around 90 thousand.

Depreciation of industrial and production assets in almost all mines of the republics is 60-80%, about 60% of stationary equipment has a second or third operational period. For new and imported equipment, there are not enough spare parts, and in many faces, they still work with jack hammers, which is not surprising - it is full of mines that are 50 years old or more.

In this situation, temporary downtimes and troubles with the salary of death are similar. Not only is the existing enterprises full of technical and economic problems, they may well be supplemented by personnel. Already today you can get a mine with virtually no problems, sometimes even without work experience. Although a few years ago it was almost impossible. Salary debts, low wages, a high level of danger and other reasons have virtually destroyed the prestige of mining work and may well lead to a massive exodus of miners to the neighboring Rostov region or other regions of the Russian Federation.

Without a normal attitude, first of all, towards people and, no doubt, the material and technical base, without investment in the industry and major investments in its salvation, which is impossible without increasing the prestige of the profession, the mining industry in the Donbass will soon decline and can only satisfy domestic needs of the republics, while export can be forgotten.

And along with export, it will also be possible to say goodbye to the ability of the LDNR government to fulfill its social obligations to the population. In general, we are talking about fatal consequences. Unfortunately, in Vneshtorgservice CJSC (MTC), which is responsible for coal export, no one seems to be worried about this. But in vain. Without the Donbass miners, already turning into an endangered species, there will simply be no MTC. God grant that the republics themselves survive.