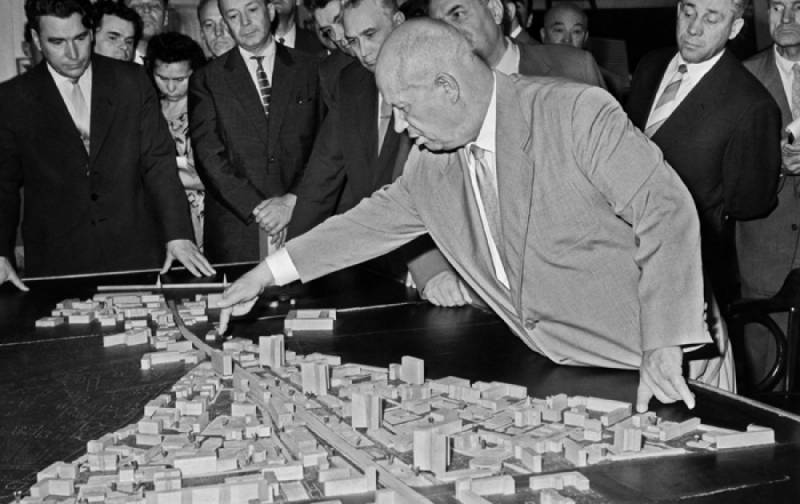 When they try to prove the positiveness of Khrushchev’s activities, they recall the relocation of the mass of disenfranchised workers from barracks and communal apartments into separate apartments. They also add pension reform and certification of peasants. In fact, these are myths created to whitewash Nikita Sergeyevich, who almost destroyed the USSR by his actions back in the 1960s.

According to the generally accepted and very tenacious version, under Joseph Stalin, mostly beautiful houses were built according to individual projects and with spacious comfortable apartments (the so-called Stalin). But because of their complexity and high cost, they were few. Therefore, party and state officials received such apartments and people who managed to stand out and distinguish themselves. Ordinary people huddled in barracks and communal apartments.

Khrushchev offered to reduce the cost, that is, to simplify housing construction, to switch to standard five-story building projects with small, deprived of comfort apartments. They were nicknamed "Khrushchev." Concrete blocks from which it was possible to quickly build a house were made in house-building plants. As a result, according to this myth, a large-scale housing construction program began, and ordinary people began to receive, if not excellent, but their apartment.

However, if you study the documents of the Soviet era - statistical collections "The National Economy of the RSFSR", which provides information on the number of built housing and how many people moved into new apartments, it becomes obvious that this is another myth. It was created in order to at least somehow improve the image of Khrushchev among the people. The factual information completely refutes the legend of mass housing construction in the Khrushchev era. Moreover, Nikita Sergeyevich also managed to spoil so much that the housing problem in the Soviet Union became chronic, unsolvable.

So, after the Great War, active construction of new enterprises was going on throughout the Union. Builders and workers were housed in temporary barracks. At the same time, near the leading enterprises of the settlement, houses were erected for workers of this plant, factory, etc. These were either individual one-story houses with 2-3 rooms with all communications, or two-story houses with 5 apartments. Individual houses worth 10-12 thousand rubles were transferred into the ownership of the owners with a one-percent loan for 10-12 years. The loan repayment amounted to a little more than a thousand rubles per year, or not more than 5% of the family income. Families settled in two-story houses without any payments, since these houses were state-owned. Usually people who came to a new enterprise from all over the country lived in barracks for some time, waiting for the commissioning of normal housing. Such houses accounted for approximately 40-45% of the total urban construction. They consisted of urban-type settlements, small working areas on the outskirts of cities near the enterprise. In the central districts of the cities beautiful multi-storey buildings were erected, “stalinkas”, which became the face of the settlement.

Every year from 1950 to 1956, the number of people who received new apartments in all types of houses increased by about 10%, which corresponded to the growth rate of the gross national income of the USSR. In 1956, 3 million 460 thousand people (more than 6% of the total urban population) received new separate apartments (or houses) in the RSFSR, of which 2 million settled in high-rise Stalin's houses. So much nomenclature was not only in the RSFSR, but throughout the Union.

Thus, in 1956, 3,4 million people received new apartments in the "Stalin" in the RSFSR. Then the number of new settlers is growing rapidly and reaches 1959 million in 5,8. However, all these people do not enter the "Khrushchev", but in Stalin's apartments and houses! And in 1960, when Khrushchev’s houses appeared, the number of new settlers began to fall. The fall continued until the displacement of Khrushchev in 1964, despite the introduction of industrial construction methods. And further, the number of people who received new apartments gradually decreased with each five-year period. That is, the housing crisis caused by the Khrushchev "perestroika" could not be overcome in the future.

The myth of Khrushchev's priority in housing construction in the USSR was not born from scratch. Mass construction began, but only in one city, in Moscow. In 1957, 12,7 million square meters were built in the Soviet capital. meters of housing in the form of "Khrushchev", that is 25% of all new housing in the RSFSR. During the reign of Nikita Khrushchev from 1956 to 1964, the housing stock of Moscow doubled, for example, in the second Soviet capital, in Leningrad, it grew by only 25%.

Thus, without Khrushchev's “perestroika” in the construction program for the period from 1956 to 1970, 115 million people could get new city apartments and houses, while the population of the RSFSR in 1970 was 81 million. As a result, while maintaining the Stalinist program, the housing problem in the Soviet Union would have been resolved by 1970. At the same time, the houses would be beautiful, comfortable for living. Khrushchev introduced gray and wretched housing, predetermining the appearance of the Red Empire and giving our enemies one more trump card in anti-Soviet propaganda. In reality, over the same period, 72 million people received new apartments of poorer quality, and the number of new settlers has been steadily decreasing since 1959. Khrushchev killed the Stalinist program and created another Union problem - housing (although in the USSR they still tried to solve it in the interests of the people, unlike the Russian Federation).

It is also worth noting that a sharp increase in the increase in commissioned housing in 1957-1959. was caused by another Khrushchev sabotage in the national economy. In 1955, after Malenkov was removed from the post of chairman of the Council of Ministers of the USSR, at the direction of Nikita Khrushchev, a large number of industrial projects and construction projects were frozen. Including new construction enterprises. The freed up human and material resources were allocated for housing construction. But then the growth in the production of building materials also stopped, the labor resources were exhausted, and therefore the commissioning of new housing was reduced. So for the short-term success, which became the main one for the Khrushchev housing myth, they caused tremendous damage not only to housing construction, but also to other sectors of the national economy.

The situation is similar in other areas. For example, the Ministry of Internal Affairs prepared the certification of peasants under Beria. Under pressure from Malenkov, the provision on passports adopted by the USSR Council of Ministers on October 21, 1953 indicated that at the request of any peasant, a passport should be issued to him. However, only since 1976, passports began to be issued to all Soviet citizens everywhere and without special requirements. Therefore, Khrushchev had nothing to do with passports for peasants.

Khrushchev is a destroyer, he did nothing useful for the people. In almost all areas - degradation, landmines. In fact, he carried out "perestroika", prepared the destruction of Soviet civilization, but did not have time to complete his dirty work. However, under Khrushchev, the USSR was able to turn off the right course, which caused an increase in destructive processes that led to the civilizational, national disaster of 1985-1993.