Telegram Zimmermann. How the United States entered World War I 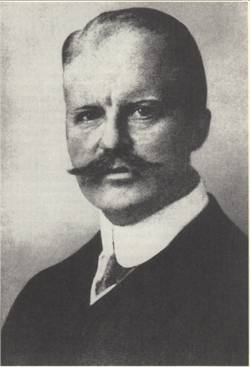 Arthur Zimmerman. Wikimedia Commons Photos
After the outbreak of World War I, official Washington declared neutrality. The United States basically did not enter the war and maintained relations with all its participants. However, in early 1917, British intelligence learned about new German plans. She intercepted the so-called Zimmermann telegram, which described the possible ways of cooperation between Germany and Mexico against the United States.

With the outbreak of World War I, the United States declared itself a neutral country. They continued to maintain relations and cooperate with the belligerent powers, but were not going to enter the war. From time to time similar offers appeared, but all of them were rejected.

At that time, Washington had enough of its worries, which simply did not allow them to join the hostilities in Europe. The total number of army and national guard barely exceeded 300 thousand people, and they did not differ in high combat efficiency. In addition, the army was engaged in operations in Mexico and other Latin American countries. In such an environment, it was hardly worth joining the allies across the ocean.

However, the United States did not stand aside. Quickly enough, they became the Entente's workshop and began to supply warring countries with military products - with good benefits for themselves. Relations with Germany were limited to diplomatic communication, but after the death of the ship Lusitania and hundreds of American citizens, the situation worsened. Calls rejoined again to join the Entente and begin an armed struggle with Germany. 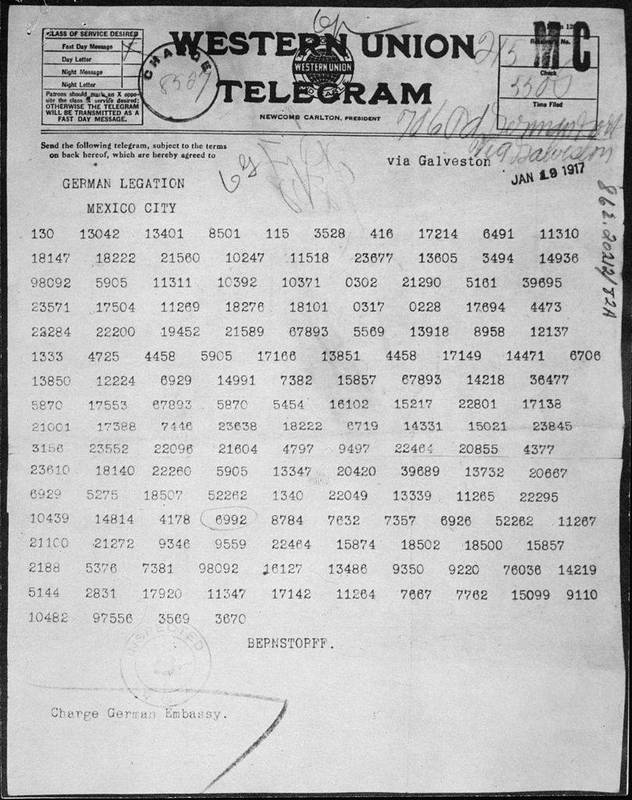 An encrypted telegram sent by the German ambassador to the US ambassador to Mexico. Photo by US National Archives / catalog.archives.gov

At the end of 1916, amid a general deterioration in the situation, German State Secretary (Minister) Arthur Zimmermann developed a plan in case the United States entered the war. The key idea of ​​this plan was to engage Mexico, already in confrontation with Washington.

According to the Zimmerman plan, Mexico was to begin active hostilities against the United States in exchange for financial assistance. In case of victory in Europe, they promised to transfer the territories previously conquered by the United States. In Berlin, it was believed that Mexico would be interested in such a proposal and would soon begin an open war. As a result, the American army will be forced to operate near its own borders and it will not have enough forces to send to Europe.

The possibility of making a similar proposal to Japan was also considered. This country could also declare war on the United States and ease the situation of Germany. However, the implementation of the Japanese scenario was associated with a lot of problems - Tokyo was already on the side of the Entente, and it would be difficult to entice it to the Central Powers.

In mid-January 1917, the main theses of the plan were issued in the form of a telegram for the ambassador to Mexico, Heinrich von Eckhard. Now the documents should be sent to the addressee and wait for a response from a foreign state.

Before the war, Germany had a developed telegraph network and a number of submarine cables, which made it possible to maintain communication with many countries, including in both americas. However, with the outbreak of war, Great Britain destroyed this infrastructure, and sending diplomatic mail was now extremely difficult, especially in another hemisphere.

Working materials of cryptanalysts. Wikimedia Commons Photos
The telegram for G. von Eckhard had to be sent in a roundabout way involving foreign infrastructure. One message went through Sweden, through the Stockholm-Buenos Aires line. For the second, they used the American connection and sent the ambassador to the United States, who was to send the document to Mexico as quickly as possible.

Like other diplomatic mail, the "Zimmermann telegram" was encrypted. This fact, as well as the special approach to sending it, was believed to be protected from interception, possible decryption, and subsequent military-political problems.

British scouts quickly enough managed to intercept the transmission from Stockholm and took up decoding. By that time, cryptanalysts from the Room 40 department had German ciphers and easily restored the contents of the telegram. Soon Mexico received a copy of the document intercepted through the local telegraph service. Great Britain now had two copies of a secret document that complemented each other.

The "Mexican" telegram was of particular importance. With its help, it was possible to show exactly how British intelligence obtained information. Otherwise, London would have to face accusations of checking someone else's diplomatic mail - moreover, a neutral country.


Zimmerman to Burnsdorf for Eckhardt, No. 1658.

We propose starting on February 1 the most merciless submarine warfare. Acting in this way, we will try to keep America in a state of neutrality (a number of groups cannot be deciphered). If we do not succeed, we will offer Mexico an alliance on the following conditions ... Waging war ... Making peace ...

Your Excellency should notify the President in secret at this time that (a number of groups cannot be deciphered) our submarine fleet will force England to ask us ... in the coming months. Confirm receipt.

Zimmerman.
Translated by Bukar R. In the bowels of the secret archives. - M .: Military Publishing House of the NPO of the USSR, 1938.

The decrypted telegram from Zimmermann delighted London. With its help, it was possible to convince Washington to enter the war as a full-fledged belligerent power. By early 1917, a difficult situation had developed on the European fronts, and the American army could change the situation in favor of the Entente. 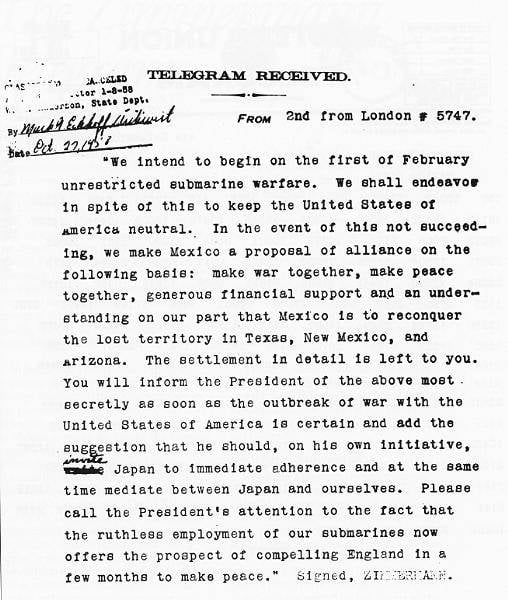 Translation of telegrams into English. Photo by US National Archives / catalog.archives.gov
On February 19, 1917, the original and translation of the German encryption was handed over to the American Embassy in Great Britain. The diplomats had to be convinced of the veracity of the message, but soon the corresponding report went to Washington.

The administration of President Woodrow Wilson did not hide the Zimmermann telegram and published it, provoking a real scandal. In public and political circles, several opposing opinions have emerged both about the document itself and about the required response to it.

Anti-German circles took the telegram as direct aggression and demanded that they immediately enter the war in order to “punish the treacherous Huns”. The pacifists and the pro-German public, in turn, declared Zimmermann's telegram fake. Society, politicians and the press exchanged opinions, argued and cursed for several weeks.

In early March, the unexpected happened. For an unexplained reason, State Secretary of Foreign Affairs A. Zimmerman officially acknowledged the plans to involve Mexico and confirmed the sending of a telegram to the German ambassador. At first he did this in an interview, and then in a speech in the Reichstag. According to some estimates, this step was one of the reasons for the imminent resignation of Zimmermann. In early August, he resigned as minister. 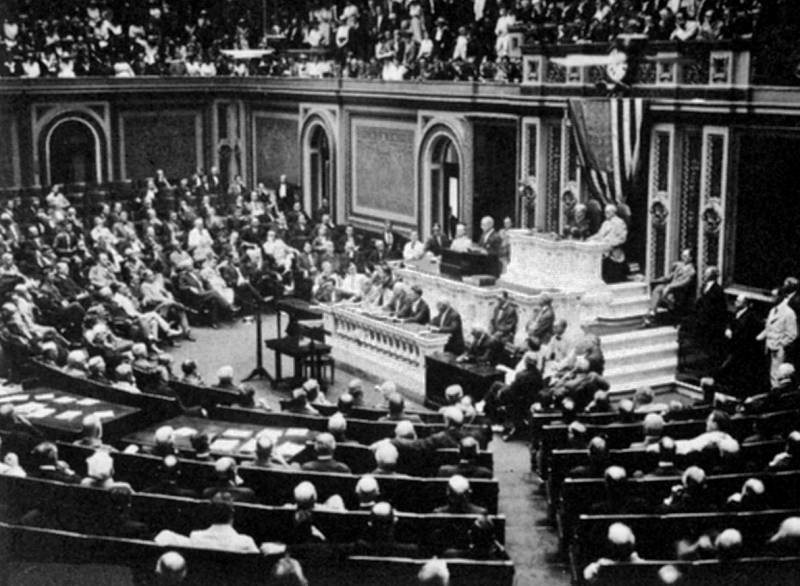 Woodrow Wilson speaks to Congress on February 3, 1917. Soon, Zimmermann's telegram will become known. Photo teachpol.tcnj.edu
Despite the scandal in the United States, Mexico considered the proposal of Germany. The government of President Venustiano Carranza examined the issue and decided not to agree to cooperation. Official Mexico City rightly decided that declaring war on the United States poses serious military and economic problems. At the same time, the support promised by Berlin seemed unlikely and almost worthless.

Japan, learning about the German plans, rejected them. Subsequently, it was announced that it was in the country's interest to maintain the existing situation. Tokyo planned to stay on the side of the Entente and did not intend to fight with the United States.

Shortly before the telegram was decrypted, on February 1, Germany resumed the previously suspended unrestricted submarine warfare in the Atlantic, aimed at destroying ships and ships flying the American flag.

New disputes began in Washington, which had a logical result. On April 6, 1917, the US Congress approved W. Wilson's proposal for entry into the war. A few months later, the expeditionary force landed in Europe and went into battle on the Western Front - on the side of Great Britain, France, Russia and their allies. 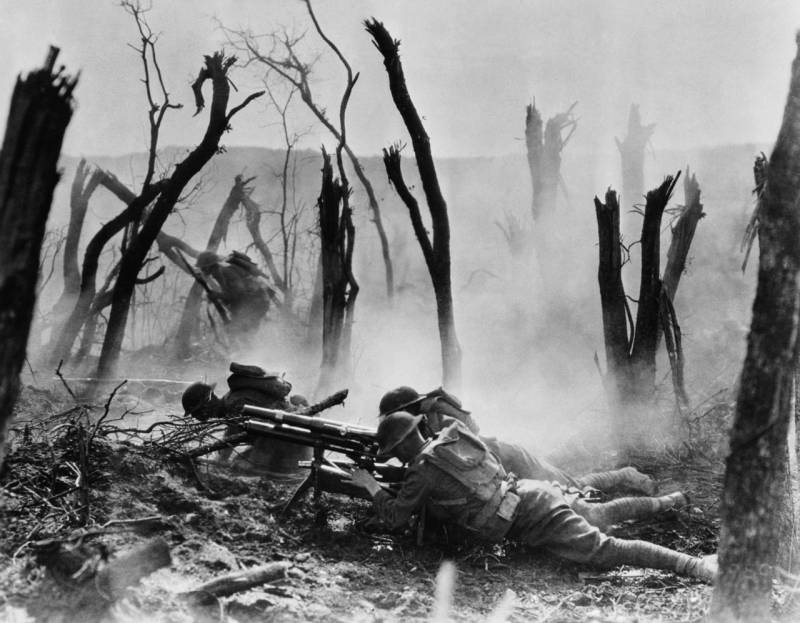 American soldiers during the fighting in the Argon forest, 1918. Several months remain until the end of the war. US Department of Defense Photos

Zimmerman’s plan to involve Mexico in the war on the side of the Central Powers was quite bold and promised serious military-political benefits. With its help, it was planned to leave the United States on the sidelines and not allow an adversary into Europe capable of providing the Entente with decisive advantages.

However, the implementation of this plan was not set from the very beginning. The document for the ambassador responsible for negotiations with Mexico immediately fell into the hands of enemy intelligence. The United States learned about Germany’s treacherous plans, while Britain and France were given the opportunity to turn a friendly country into a war ally. What happened next is well known. Just a year and a half later, the United States was on the list of winning countries.

It should be noted that Zimmermann’s telegram was not in fact the only reason for the United States to enter the war. Since 1914, active debates have continued about the need for such a step, in which a variety of arguments were given. In addition, various political and commercial structures through these disputes promoted their interests. As a result, the “party of war” became the winner of the debate. A certain contribution to this development was made by the political miscalculation of the German Ministry of Foreign Affairs and the success of British intelligence.

We are in Yandex Zen
The development of the military-industrial complex of the Russian Empire in the years of WWI
Diplomats of the People's Commissariat of Defense: on the eve and during the war
Military Reviewin Yandex News
Read Military Reviewin Google News
9 comments
Information
Dear reader, to leave comments on the publication, you must to register.