Americium-242. For a change of nuclear war 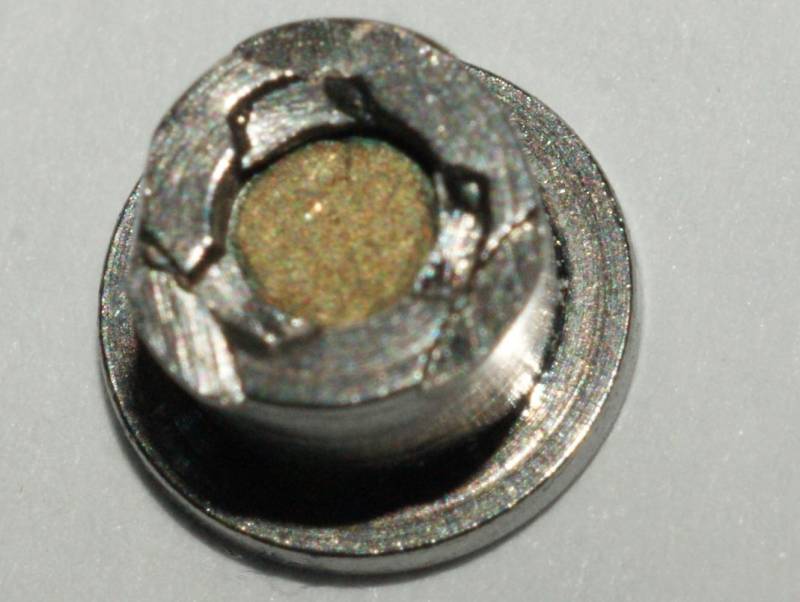 Americii, which will be discussed in this article

Small-sized and low-power nuclear charges have historically been unlucky. In those blessed times, when all types of nuclear charges were actively developed and tested, there was no suitable isotope for them. Only plutonium-239 and uranium-235 were available, and you cannot make a compact nuclear charge out of them. Of course, the American W54 warhead weighing 23 kg looked very profitable against the background of the “Fat Man” weighing 4,6 tons, but still it was not as compact as we would like.

This warhead, apparently, was one of the last that was actually experienced by a nuclear explosion. The subsequent moratorium on nuclear tests sharply slowed down the work, due to which mainly powerful products remained in the nuclear arsenal. Now that the non-proliferation regime and nuclear restrictions weaponsseems to be on the verge of dying, it is becoming possible to return to the development of new types of nuclear weapons that can diversify nuclear war.

Americii is the best candidate

Plutonium as a filling of a nuclear charge is good for everyone, only it does not allow creating a truly compact charge, since it has a rather large critical mass - 10,4 kg. At a density of plutonium in 19,8 g per cubic centimeter, the volume of the ball will be 525,2 cubic. cm, and its diameter is 10,1 cm. In addition, in order to break out, one must take not one critical mass, but several more, say, 1,2 or 1,35 critical mass. This is due to the fact that the detonation system and the neutron fuse in a compact charge are not as good as in an air bomb or a missile warhead, and to achieve the effect, you need to have a larger supply of fissile material. Therefore, compact plutonium charges usually used 13-15 kg of plutonium (for 13 kg the diameter of the ball is 10,7 cm), which is formed into an egg-shaped or cylindrical core.

In principle, it turned out, although heavy, but quite suitable for large-caliber artillery shells, missiles and mines, charges in the power range from several hundred kg to 10-15 ct of TNT equivalent. But there was a serious objection: why use precious weapons-grade plutonium on a low-power charge, if it is possible to make thermonuclear munitions with an incomparably greater power? The 400-kiloton warhead will achieve an effect far greater than the 10-15 ct or even less.

In general, there were two reasons for the dismissal of low-power nuclear charges: not too compact dimensions, which made them difficult to use, and military-economic arguments for the irrationality of spending a valuable isotope.

In the 1950's there was nothing to replace uranium and plutonium as weapons isotopes. But since then some time has passed and a good candidate has appeared - America-242. This isotope is formed during the decay of plutonium-241 (formed by neutron capture by uranium-238), and is contained in plutonium processing waste and spent nuclear fuel (SNF). After 26 years, all plutonium-241 will decay into americium-241, whose half-life is much longer - 432,2 years. Thus, spent nuclear fuel discharged from the reactors and put into storage at the end of the 1980's - the beginning of the 1990's should already contain a significant amount of americium-241. To distinguish it, as far as one can judge, is not particularly difficult. 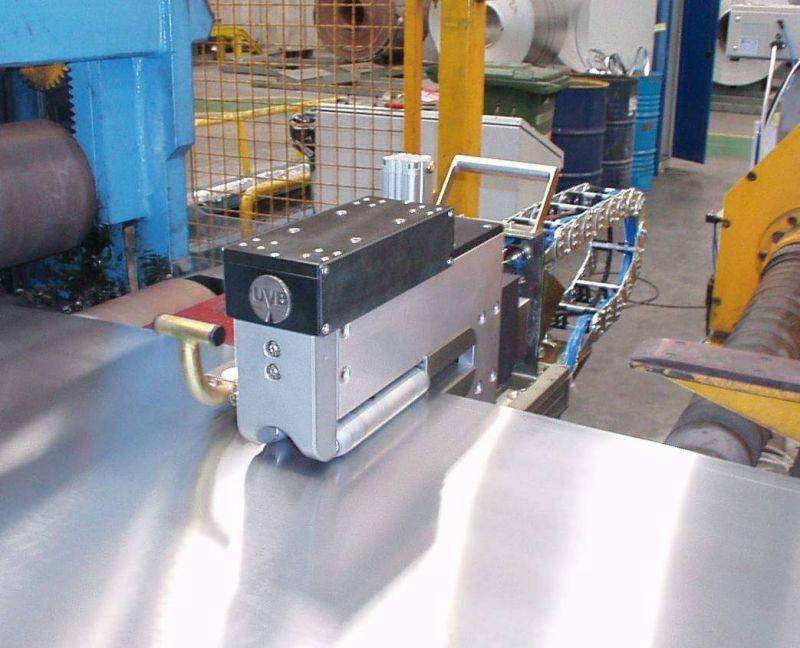 Americium-241 is used in industry, for example, in devices for continuously measuring the thickness of rolled steel, such as that shown in the photo
If am-241 is irradiated with neutrons, an even more remarkable isotope of americium-242m will be obtained. Since Obninsk designed the America-242 reactor, designed to receive neutron radiation for medical purposes, some data on its production was provided. 1 gram am-242m is formed by irradiating 100 grams of am-241 (it was obtained at the now dismantled BN-350 reactor in Shevchenko, Kazakhstan), and to obtain this amount it is enough to reprocess 200 kg of the spent SNF. We have a fair amount of this good: about 20 thousand tons of SNF and annual production of about 200 tons more. The accumulated SNF is enough to produce about 1000 kg am-242m.

What am Xnumxm good at? Extremely small critical mass. Pure isotope has a critical mass of only 242 grams. At a density of americium in 17 g per cubic centimeter, this will be a ball with a diameter of 13,6 cm.If you take 1,33 of critical mass, the ball will be 1,35 cm in diameter.With a reflector and a detonation system, it is possible to fit into the dimensions of an 1,45-mm projectile. The energy release of 40 g am-1m corresponds approximately to 242 kg of TNT, so such a charge with 4,6 g of the isotope will yield approximately 22,9 kg of TNT.

You can use a mixture of am-241 and am-242m. With the content of the latter in 8%, the critical mass will be 420 grams. The diameter of the ball will be 3,8 cm. It can be a nuclear grenade for RPGs, a mine for an 82-mm mortar, and so on. The energy output will be about 2 tons of TNT equivalent.

In general, the best candidate for the role of filling for very compact nuclear charges, up to small-caliber nuclear shells. Americium is also good in that it dissipates little heat during decay, hardly warms up, and therefore the storage of nuclear ammunition filled with americium does not require refrigerators. Long half-life: am-241 - 433,2 years, am-242m - 141 year, also allows you to produce and accumulate americium for future use. Such ammunition can be stored 30-40 years without a significant change in their characteristics, while plutonium after 10-15 years must be sent to clean up decay products.

The American charge can be used on its own, as well as as a nuclear neutron fuse for more powerful charges. If it turns out that the americium charge can initiate a thermonuclear reaction (which may well be), then the possibility of creating very compact and light, but powerful thermonuclear charges will open up.

An important question is why such a very compact americium charge can be used. As an example, we’ll take a charge equipped with approximately 500 grams of americium and an energy release of 2,3-2,5 tons of TNT. The total weight of this product may be in the range of only 2-3 kg. Where and how can it be applied?

Air-to-air and air-to-air missiles, that is, anti-aircraft and aviationdesigned to destroy aircraft. For an airplane, an overpressure of 0,2 kgf / cm2 is definitely dangerous (the wing load on the Su-35 can, for example, reach 0,06 kgf / cm2). Such an overpressure will cause an explosion of a compact nuclear charge with a capacity of 2,3 tons at a distance of about 210 meters, and an overpressure of 1,3 kgf / cm2, at which the destruction of the aircraft will definitely occur, will create an explosion at a distance of 60 meters. Non-contact fuses of aircraft missiles usually initiate a charge at a distance of 3-5 meters from the target, and in this case, the target aircraft definitely does not shine - a guaranteed defeat! Small splashes of metal and a cloud of radioactive vapor.

Anti-ship missiles. Small anti-ship missiles, such as the X-35 and similar, most convenient for use (there are aircraft, helicopter, ship, ground and even container launchers), unfortunately, are so weak that they cannot but sink, but even seriously damage any large ship. This is clearly seen in the firing on the decommissioned USS Racine tank landing ship (LST-1191). It hit 12 anti-ship missiles similar to the X-35, while the ship remained afloat. Only a torpedo did away with him. This is not surprising if the warhead of the missiles has 150-250 kg of weight and their power is relatively small. Equipping an X-35 missile with an American nuclear charge of the above characteristics makes this missile much more dangerous even for large ships. If an destroyer like Arleigh Burke is hit by a similar missile, then in the best case scenario, it will require a lengthy factory repair. But you can count on drowning, since an explosion of such power could well destroy the ship's hull. 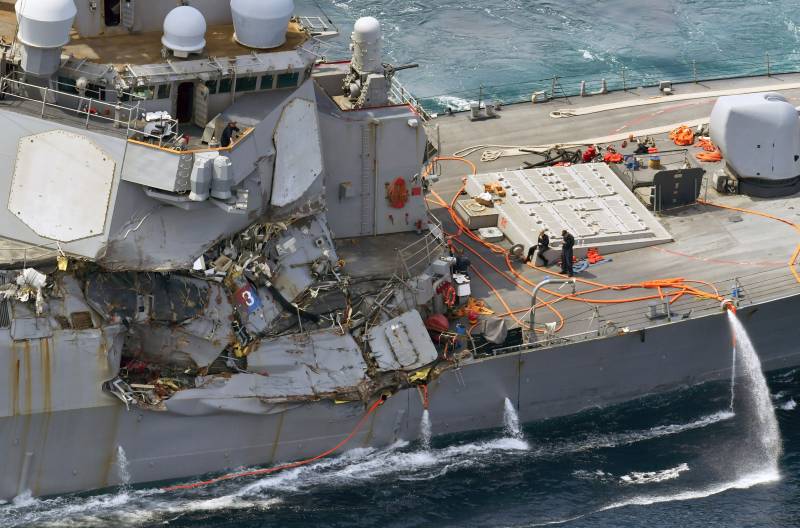 USS Fitzgerald (DDG-62) after a collision with a Philippine container ship 17 on June 2017. This type of destroyer has a structural defect, which is why after the collision and breach the ship lost speed due to flooding of the engine room. If a missile with an American charge gets into such a destroyer, it’ll probably sink
Torpedoes. In general, a charge of 2,3 tons of TNT installed in a torpedo, not even the most modern, turns it into a weighty argument against even large ships and ships.

ATGM. If the weight of the entire ammunition is in the 2-3 kg range, then they can equip missiles for anti-tank missile systems, for example, the Cornet. It has a good firing range, up to 5,5 km, which makes it quite safe to use a compact and low-power nuclear charge. Any, even the newest and most protected tank, will be guaranteed destroyed by such a missile.

Already from this very brief overview, it can be seen that the best carrier for such very compact nuclear charges are various types of guided missiles. The American charge will turn out quite expensive and they can be produced not so much, several hundred, perhaps up to a thousand pieces. Therefore, they need to shoot something valuable and important, which, at least economically, will justify its use. Objectives: airplanes, ships, air defense systems, radars, possibly also the latest (i.e. the most expensive) Tanks and self-propelled guns. Combining the accuracy of guided missiles with a much higher power of the americium charge compared to standard explosives will make such a weapon very effective.