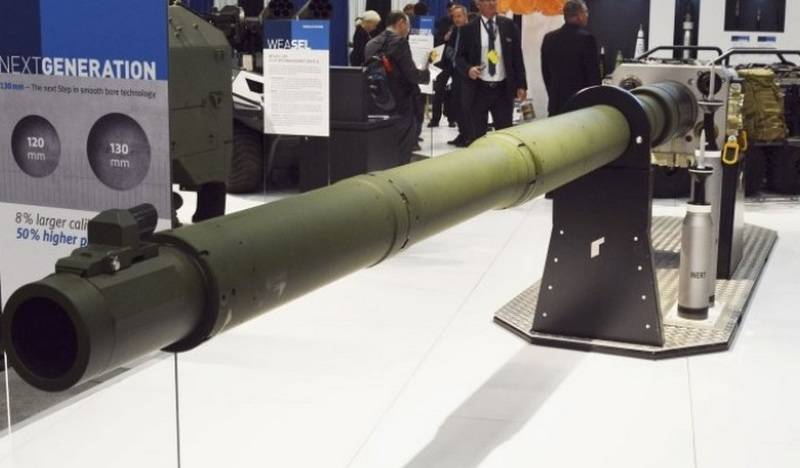 The German Rheinmetall completed the development of the promising 130-mm smoothbore tank gun Next Generation (NG) 130, the first prototype sent to the proving ground. This was reported by the bmpd blog with reference to the journal "Jane's International Defense Review".

Rheinmetall Weapons and Ammunition (division of the German group Rheinmetall) announced the completion of the development of the 130-mm promising smooth-bore tank gun NG 130, but the design of the gun will still be amended. Rheinmetall plans to offer this gun as a potential weapon for the Next Generation Combat Vehicle (NGCV), a promising next-generation combat vehicle of the US Army.

According to published data, the 130-mm gun has a barrel length of 51 caliber (L51) and uses new high-strength steel and barrel chrome plating. Installed vertical wedge bolt and electric trigger shot. The gun has an increased chamber volume, which allows the use of an increased charge to obtain a higher initial velocity of the projectile and its armor penetration. The gun has a heat-insulating casing and a barrel bend control system.

The actual barrel length is 6,63 m, the total weight of the gun is 3 tons, including sliding mechanisms. This does not take into account the weight of the mounting elements for installation in the tower.

The first 130-mm ammunition has already been developed for the gun. According to Rheinmetall, it was an armor-piercing detachable projectile with a detachable pallet (APFSDS-T) with a semi-combustible shell, a new high-energy powder charge belonging to the category of detonation-insensitive, and a new, improved long-length tungsten armor-piercing core with increased armor penetration.
Military Reviewin Yandex News
Military Reviewin Yandex Zen
152 comments
Ad