Norman format? On the front line in Lao PDR does not apply! 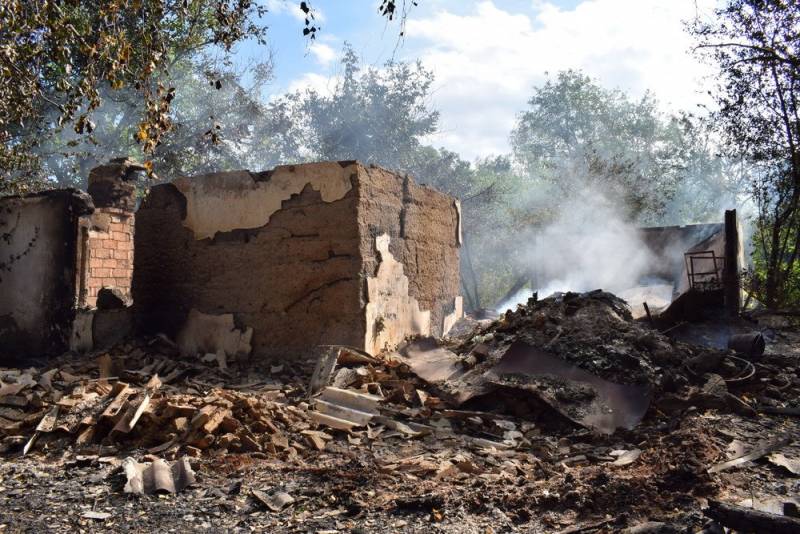 But does it make sense?

Of course, we, the inhabitants, can not know anything about the real topics and results of the negotiations within the framework of the Norman format (as well as in all others). All we have to be content with is the final communique and megatons of chewing gum, which, under the guise of “insiders” and “analysts,” are fed to the public by the media and all kinds of “experts”.

That is why I want to believe that in fact Putin, Macron, Merkel and Zelensky agreed in Paris to something more than what was announced following the negotiations. Because otherwise they obviously were going in vain. Why agree on new places for the withdrawal of troops, if the Ukrainian military safely returns to the old ones, on which the breeding was supposed to happen in the 2015-2016 years?

Go away to return

Today, fighting is still ongoing on the demarcation line using large calibers, artillery, armored vehicles and drones. Information about the dead and wounded on both sides appears daily - only, unlike the Ukrainian side, in the LNR they prefer to say that the enemy was blown up on his own mines, choked with bacon and all in the same vein.

At the breeding sites, the shooting also does not cease, and on Thursday representatives of the LPR People’s Militia announced that the Ukrainian military had regained their positions.

“Within the area of ​​breeding site No. 1 in the area of ​​the village of Stanitsa Luganskaya, the military personnel of the 46-th brigade of the Armed Forces of Ukraine are in the previously abandoned positions, which is a direct violation of the eighth paragraph of the Framework decision of the tripartite Contact Group on the separation of forces and means, signed on September 20 of 2016 and prohibiting the presence of military personnel in the breeding areas of the parties ",
- claim at the headquarters of the 2 of the LPR army corps, referring also to the representatives of the OSCE, who also witnessed the return of the Armed Forces to their positions.

What is the point of agreeing on new points of the separation of forces and assets if, in areas where peace and rest had long been to come, they can actually start shooting again at any moment? By the way, over the past year alone, the OSCE recorded more than 4 thousand shootings in the checkpoints through which LDNR residents travel to Ukraine and back. That is, even at CPVV no one can feel safe.

All this Santa Barbara, connected with the Minsk Agreements, might seem like a fun undertaking, if not for the losses among the fighters and civilians and the gradual destruction of infrastructure. The other day, despite preliminary agreements, the Armed Forces of Ukraine opened fire on a repair team that was trying to repair a damaged section of the aqueduct near Gorlovka.

All that we see today is promises, loud statements, imitation of violent activity in front of lenses and other political and diplomatic leapfrog, but the only thing that could become a real marker of a qualitative change in the situation is a ceasefire for at least a month. All truces declared were a dummy. As a rule, after a statement about a "bread", "school" or any other truce, firing begins at best in the evening. Therefore, hundreds of thousands of residents of Donbass, the sixth year of living under the gun of enemy artillery, have long had no faith in words.

However, Novorossia is not discouraged and continues to live its own life. She studies, works and stands in colossal lines for Russian passports, which have stretched for more than 10 months.

In fact, amid endless chatter, this is the only ray of light in the dark realm. The only concrete peremptory decision of Russia, which allows us to believe that when a critical mass of Russian citizens on the territory of LDNR is reached, Ukraine will forever remain in the past, and with it the hardships of war. Still shoot at the Russians APU hardly dare. It is thanks to this hope that people find the strength to live in constant danger and calmly react to the next madness of Kiev, which either announces its intention to deport the inhabitants of Donbass, or wants to fence itself off from them ...

The number of people who received Russian citizenship is gradually growing, and I want to believe that the speed of certification will increase. Perhaps this is the only good news for the local population. For the sake of this, one can endure everything: war, delays of an already low salary, unprofessionalism of the authorities. People believe that sooner or later it will all end. After all, it was for the sake of these passports that it all began almost six years ago, in 2014.