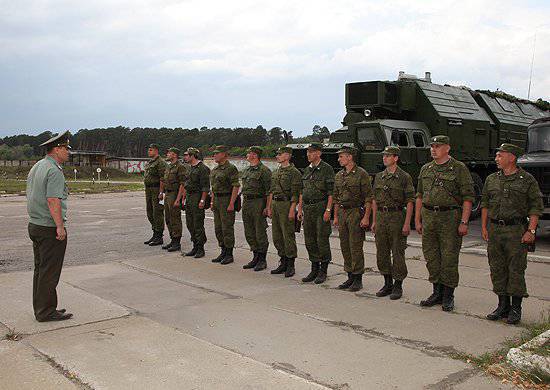 On the basis of the Teikov missile compound (Ivanovo region), a three-day training and methodological gathering began with the management team of the engineering services of the RVSN associations, formations and institutions.

Particular attention during the collection will be given to the study of new weapons entering the Strategic Missile Forces, including the engineering support and camouflage machine (MIOM), which has no analogues in the Russian Armed Forces and is part of the Yars mobile ground-based missile system. MIOM is designed to perform such tasks as engineering reconnaissance of combat patrol routes and field positions, including an assessment of the bearing capacity of soil foundations, determination of the load-carrying capacity of road bridges using the latest measurement system (the uniqueness of the system is that with the highest accuracy the possibility of passing the unit by measuring the angle of inclination of the beams), checking the dimensions of the routes of the routes and platforms. In addition, with the help of MIOM, engineering reconnaissance of mine-explosive obstacles and demining of the terrain is carried out; clearing of roads in field position and their planning, separation of debris. MIOM is also used in the performance of engineering tasks of camouflage and imitation, which provide for carrying out activities to hide and simulate the missile complex at field positions, distort the tracks of the units of the complex immediately after they are occupied by rocket divisions, including rolling tracks to false positions and objects. slope of the terrain and the location of the units using the navigation system. During the course of the lesson, the participants will be clearly demonstrated all the possibilities of MIOM.

The delivery of the MIOM to the RVSN is fully completed at the Teikov missile compound. These machines will also go to the Irkutsk and Novosibirsk missile formations in the course of their upgrading to new missile systems, the press service and information department of the Russian Defense Ministry said.