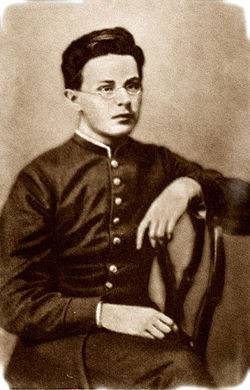 The struggle for freedom, scientific activity, three decades in prison and a business trip to the front as a sniper are far from all the stages of the life of the revolutionary and honorary academician of the USSR Academy of Sciences Nikolai Morozov (25 June (7 July) 1854 - 30 July 1946). He could rightfully be called the "universal man" of our time.

The future academician and revolutionary was born in 1854 in the estate of Borok (Yaroslavl Province) in the family of a landowner and a former serf peasant. Nikolai received his first training at home, but then entered the Second Moscow Gymnasium. However, he studied poorly there and was soon expelled, after which he took up self-education. In 1871, Morozov became a volunteer at Moscow University. 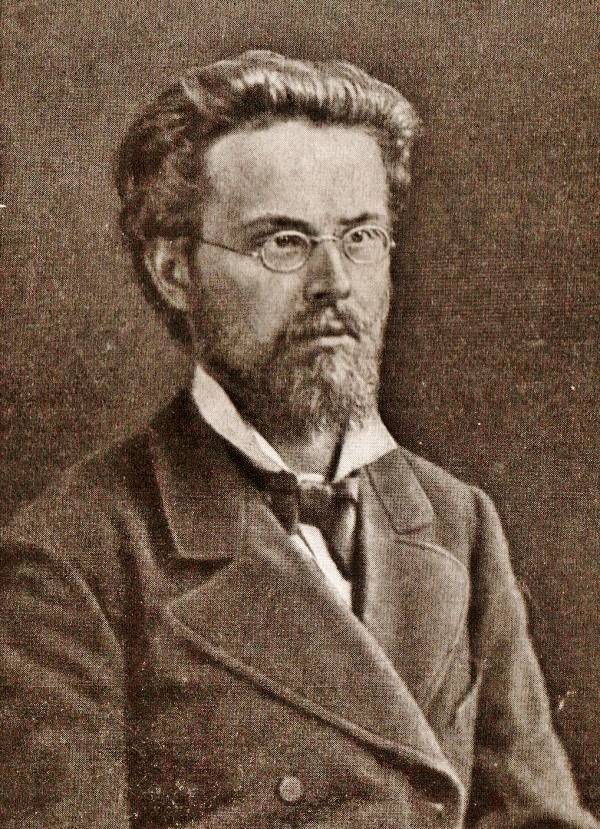 Morozov - the head of "Earth and Freedom." Photo Bvi.rusf.ru
In 1874 N.A. Morozov joined the circle of Tchaikovsky Narodniks. Together with his comrades, he traveled to the nearest provinces and actively communicated with peasants. In the same year, Morozov went to Switzerland to represent the interests of Tchaikovsky at international events. Then he joined the ranks of the First International.

In 1875, Morozov returned to Russia and was immediately arrested on suspicion of revolutionary activity. Three years later, the trial “193's Trial” took place, according to the results of which Morozov was released - the pre-trial detention fully covered the sentence imposed.

After the conclusion and trial N.A. Morozov, with renewed vigor, set about revolutionary work, but already in an illegal position. Soon he entered the organization “Earth and Freedom”, and then became one of its leaders and the secretary of her eponymous newspaper. 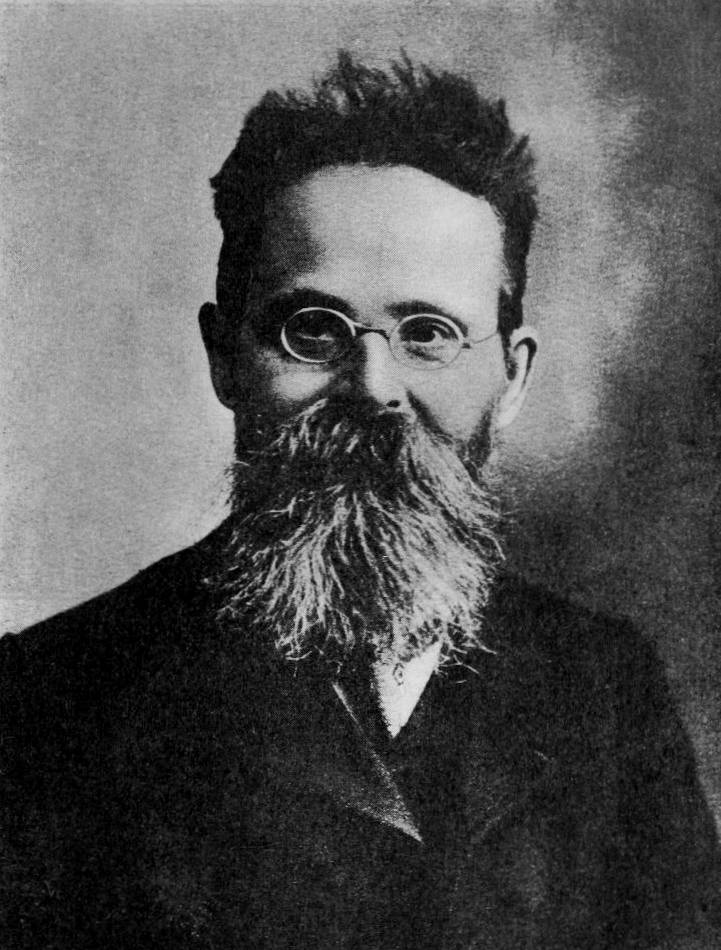 Photo of the 80 of the XIX century. Wikimedia commons
In 1879, Morozov was among the creators of the "People’s Will." This organization deemed necessary a radical struggle and prepared the appropriate “actions”. Several attempts on the emperor Alexander II were carried out with the direct participation of N.A. Morozova.

However, already in 1880 Mr. Morozov disagreed with his fellow revolutionaries and went abroad. The reason for this was the disagreement about the role of terror in the political struggle. Companions of Morozov considered him an extreme measure, which should be abandoned in the future, and he saw in power methods a normal tool for regular use. Soon, these views were formed in the form of a concept called “telism” - by the name of William Tell. 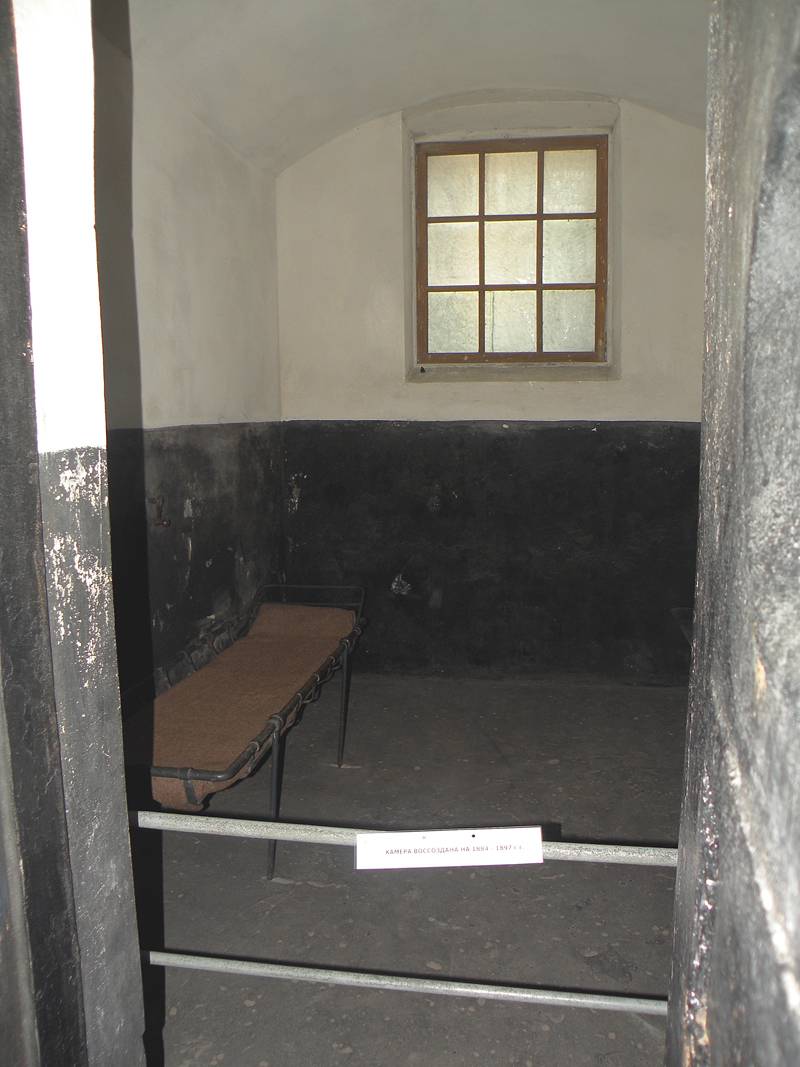 One of the cells of the Shlisselburg fortress, where Morozov was serving his sentence. Wikimedia Commons Photos
In January 1881 N.A. Morozov and his wife illegally returned to Russia and were arrested. A year later, as part of the “Process of Twenty,” he was sentenced to life imprisonment. Morozov served his sentence at first in the Peter and Paul Fortress, and from 1884 — in Shlisselburg. The appearance of the playful nickname “Frost of Shlisselburgsky” is associated with this period.

ON. Morozov did not lose heart and did not waste time. Having access to literature, he continued his self-education. The imprisoned revolutionary studied foreign languages, natural and social sciences, and even wrote his own scientific works. By the time of his unexpected release, Morozov managed to learn 11 languages ​​and write 26 volumes (!) Of manuscripts on various topics, including on current issues of various sciences. 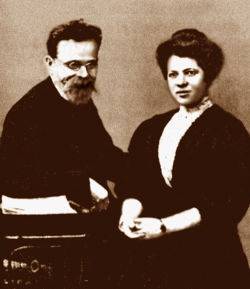 Morozov with his wife Ksenia Alexandrovna, 1910, Photo by Wikimedia Commons
On 28 on October 1905 an amnesty was declared, and Morozov was released. Together with him, he took numerous manuscripts and voluminous knowledge in many areas. It can rightfully be argued that from the conclusion of N.A. Morozov was one of the most educated and erudite people of his time.

After his release, the future academician was mainly engaged in scientific work, but did not forget about the struggle for the freedom of the people. He attempted to publish his scientific works, got married and even joined the Masonic Lodge "The Polar Star". In 1909, Mr. Morozov received an invitation to become chairman of the Council of the Russian Society of Lovers of World Studies (ROLM). He held this position until the dissolution of ROLM in 1932. 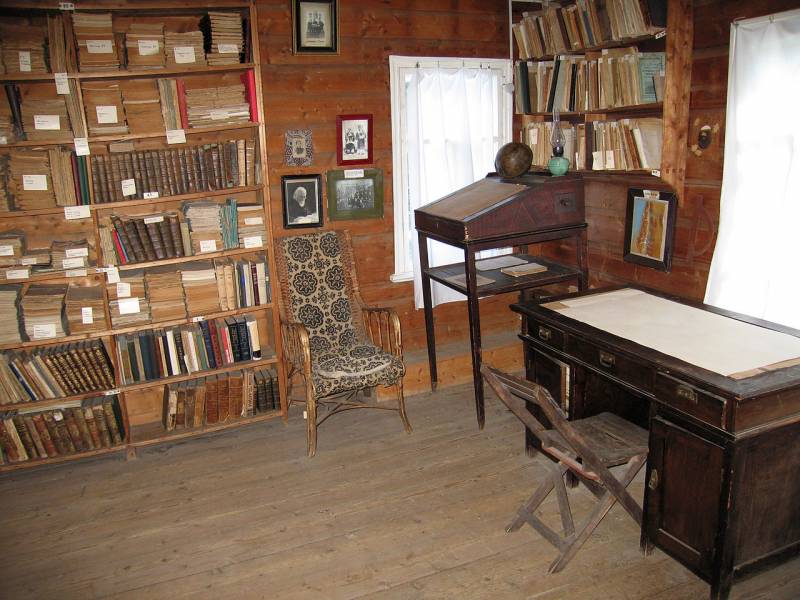 House Museum in Bork. The office of Morozov. Wikimedia Commons Photos
In 1911-12 Morozov again had to go to prison. However, at the beginning of 1913, another amnesty took place, and the scientist was released - this time forever. By this time, from the 59 years of life of N.A. Morozov spent almost 30 in prison.

Revolutionary after the revolution

Events 1917 Mr. N.A. Morozov accepted with enthusiasm, although he did not share the positions of the Bolsheviks. Despite disagreements with the new government, a prominent scientist continued his activities and even received new posts and titles.

In 1918 Morozov became director of the Natural Science Institute. P.F. Lesgaft. He remained in this position until the end of his life. On the initiative of the new director, the publication of scientific works on various issues in the field of natural sciences began. These books promoted progressive theories in the field of the structure of matter, astronautics, etc. Later, the main works of N.A. Morozov and his EIW colleagues were highly appreciated by leading scientists of the country and the world. However, some historical research and concepts has not found support in academia. 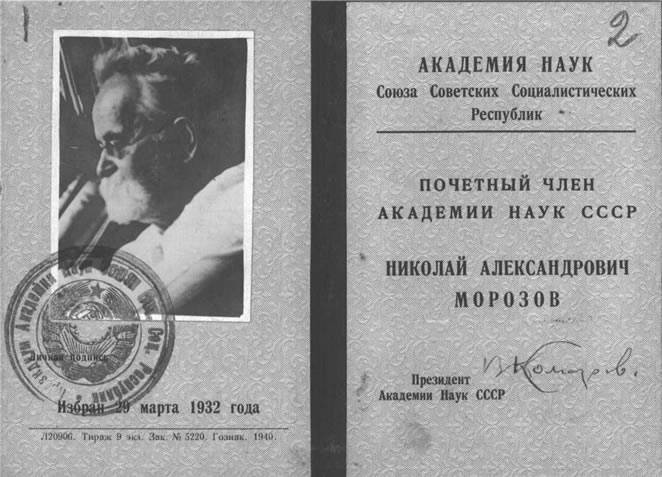 1932 g. - N.A. Morozov was elected an honorary academician. Photo Militaryexp.ru
In 1932, the Lenghub Executive Committee closed the ROLM, chaired by Morozov. This was preceded by an investigation that revealed an “counter-revolutionary grouping” in the organization. Unlike some colleagues, N.A. Morozov after that was not subjected to harassment, although he had to move to his native village for a while. Borok. In the same period, Morozov was elected honorary academician of the USSR Academy of Sciences.

However, after that, the scientist continued his work. The main base for scientific activity was now an observatory, previously built by the forces of ROLM. In 1939, a real scientific center appeared in the village. Later, on its basis, new organizations were created, now related to the RAS.

At the age of 85 years N.A. Morozov became interested in shooting. In 1939, he enrolled in OSOAVIAHIM, for sniper courses. Despite his venerable age, the revolutionary scientist mastered sniper business and then regularly visited the shooting range to maintain skills. 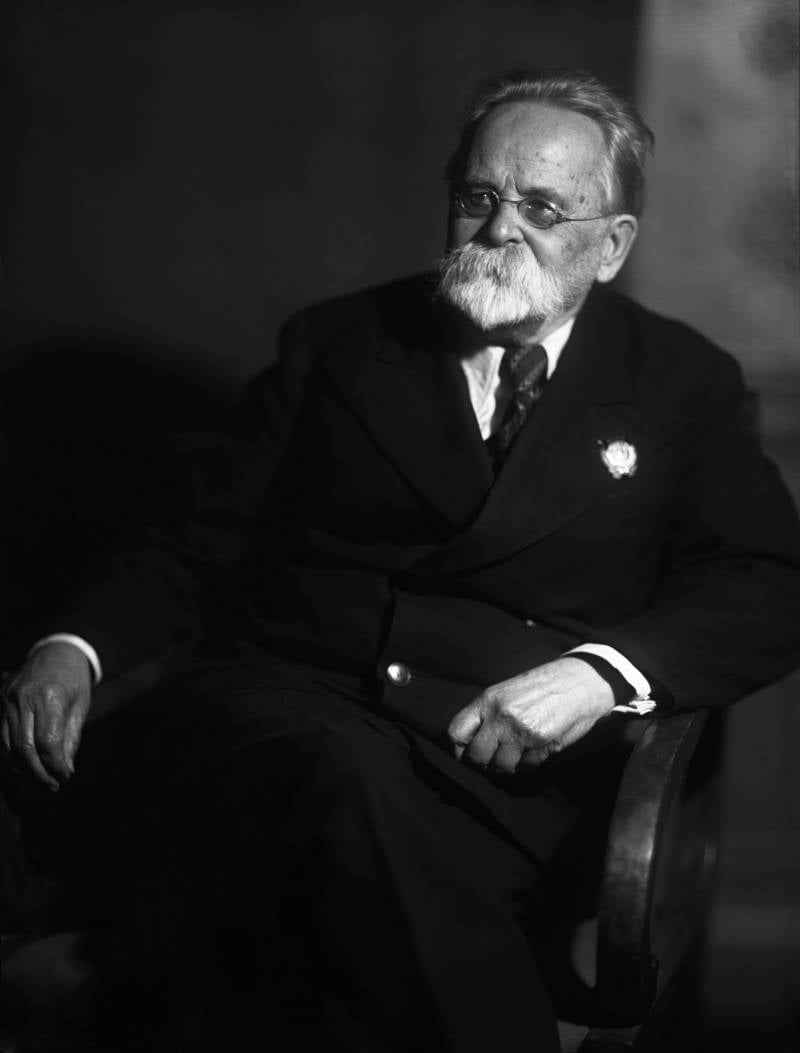 Photo RAS / ras.ru
After the attack of Nazi Germany, Academician Morozov, who was working in Leningrad at that time, turned to the draft board - he wanted to go to the front as a volunteer. Due to age, he was refused. However, the sniper scientist continued to write letters and even threaten to appeal to the “top”.

In 1942, the military registration and enlistment office "surrendered" and accepted N.A. Morozov to the service. However, he was taken as a volunteer business trip as a sniper and allowed to go to the front, but only for a month. Soon Morozov was in one of the units of the Volkhov Front. 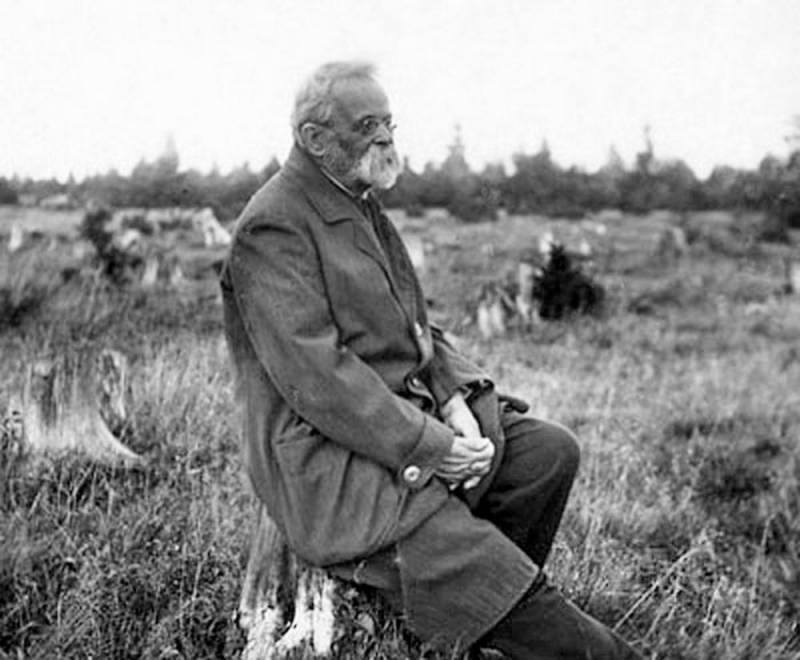 Academician Morozov in nature. Photo Militaryexp.ru
Despite his considerable age, the “rookie” turned out to be a true professional. The sniper regularly went to the firing position and hunted down the enemy. As befits a scientist, before each shot he did all the necessary calculations - and hit without a miss. For a month of business trip N.A. Morozov killed about a dozen enemy soldiers and commanders.

After a month of service, the scientist was returned from the front to the rear and offered to re-engage in scientific activities. However, after that N.A. Morozov continued to write letters demanding that he be returned to the front. However, now the correspondence did not give the desired result. 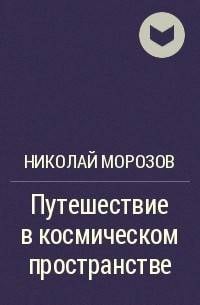 Returning to Leningrad, N.A. Morozov continued his scientific work, and now research is carried out by Yenin. Lesgaft were conducted taking into account the needs of a warring country. New research was carried out and fresh relevant scientific papers were published.

Honorary Academician, Revolutionary, and Sniper passed away on July 30 1946 in his home in Bork. A museum was later organized there. In memory of the scientist, streets, enterprises, a small planet and a crater on the moon were called. Moreover, the first objects were named during the life of Morozov. 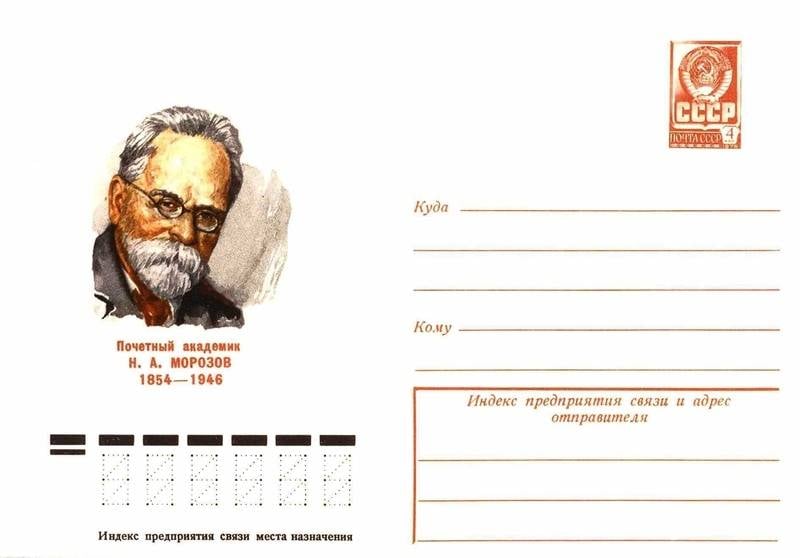 1979 Postal Envelope Wikimedia Commons Photos
Nikolai Alexandrovich Morozov lived a long and stormy life, leaving a great legacy. His works touched many areas and made a significant contribution to laying the foundation for subsequent practical achievements. Morozov can rightfully be considered one of our main natural scientists of the 20th century and one of the founders of Russian space science.

The scientific heritage of Morozov is preserved. So, the Russian Academy of Sciences created the resource “N.A. Archive Morozova "- 13 inventories and 135,7 thousand sheets are fully digitized and available to everyone.

"Archive N.A. Morozova "on the website of the RAS:
http://www.ras.ru/namorozovarchive/about.aspx