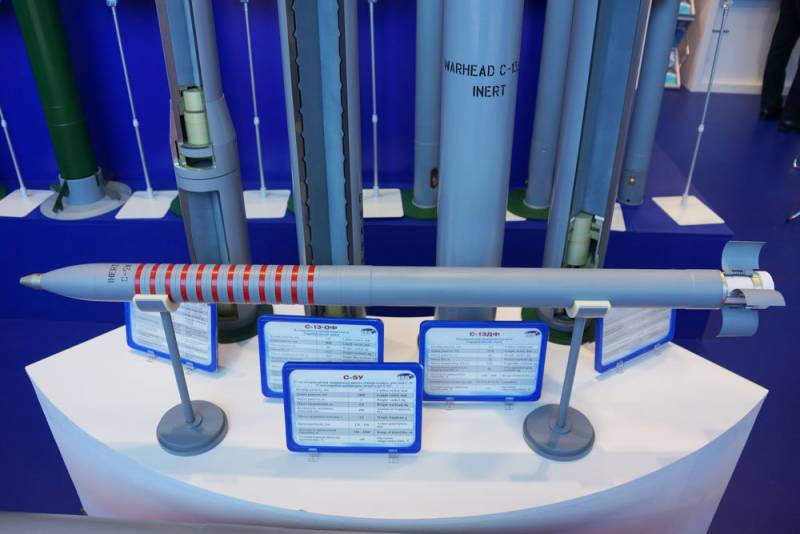 In the nomenclature of domestic aviation unguided air-to-ground missiles of various types occupy a special place. The S-5 rocket became the most popular at one time, however, in terms of its characteristics, it was seriously inferior to other models. This year, an option for a deep modernization of such a product was presented, called the S-5U. The updated rocket retains the minimum features of the base weapons and thereby acquires new opportunities.

The need for modernization

Uncontrolled aircraft missile (NAR) C-5 basic version entered service in 1955. 57 mm caliber rocket with a length of 880 mm and a mass of approx. 3,8 kg flew 1,5-1,8 km and delivered to the target a warhead weighing hundreds of grams. In the future, its modernization was repeatedly carried out, as well as new modifications with various differences were created.

During the war in Afghanistan, it turned out that the effectiveness of the C-5 is insufficient for such a theater. Light warhead fragments retained the lethal effect at a distance of not more than a few meters and sometimes could not break through the walls of adobe structures. Also known are stories of varying degrees of reliability about the cotton robes of the Mujahideen, who protected against fragments at the end.

Even during the Afghan war, the S-5 ceased to be the main NAR of Soviet aviation and ceded its place to more effective weapons of a larger caliber. Then in 1990, the S-5 family missiles were discontinued. A considerable supply of such weapons remained in the warehouses, but their replenishment was no longer planned.

It was obvious that to ensure the required combat qualities, the S-5 NAR needed a deep modernization. However, carrying out such work no longer made sense. Attempts were made to create an improved C-5, but none of them interested our air forces.

This summer, for the first time, the Army-2019 exhibition showed a new version of deep modernization of the NAR S-5. The Novosibirsk Institute of Applied Physics (IAP) has been developing and modernizing NAR for several decades and has now introduced a new version of the existing weapon - the S-5U (“universal”) missile. 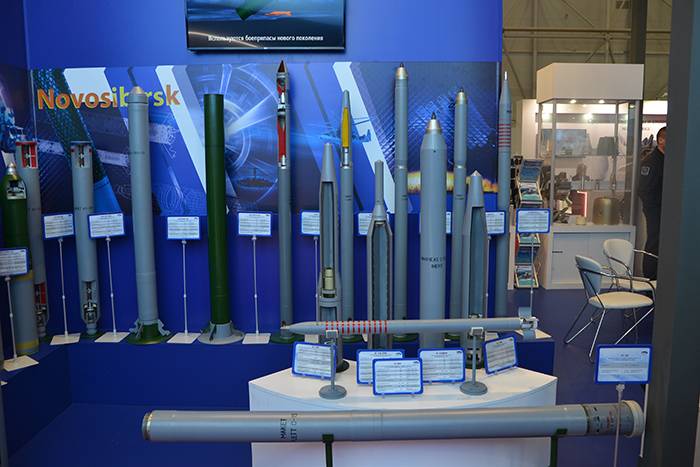 Stand of the Institute of Applied Physics. Photo Aex.ru
S-5U can be considered as a modernization of the old NAR, but in fact it is a completely new product in the old form factor. While maintaining the dimensions and mass, other components are used, and the architecture is noticeably changed. In particular, instead of the old feather stabilizer used curved parts lying on the body before starting. In addition, the new missile has become longer (1090 mm) and heavier (6 kg).

In a cylindrical body with a diameter of 57 mm with a conical head part, a combined-action warhead and a solid-fuel engine are sequentially placed. The nozzle is brought to the tail section of the housing. Next to it are folding stabilizers. The design of stabilizers, according to the developer, improves accuracy.

The rockets of the S-5 family used engines with a ballistic charge. The S-5U project uses modern mixed solid fuel. Due to this, it was possible to double the ratio of gas energy and engine mass. The engine charge has become smaller and lighter, but provides high traction and allows you to fire at ranges up to 3-4 km.

The increase in engine performance allowed to increase and strengthen the warhead. NAR S-5U received a universal warhead with three damaging factors. In this case, the product itself is made in the form of a single unit with several components. Cumulative, high-explosive and incendiary impact is provided. Warhead made on the basis of an explosive charge weighing 800 g.

The charge of the warhead has a cumulative funnel, which allows punching up to 150 mm of homogeneous armor. In case of undermining, the warhead scatters around itself 490 ready-to-use striking elements weighing 2,5 g. Together with the fragments, incendiary elements scatter. Thus, a rocket is capable of hitting both the target itself and the objects around it. Declared the possibility of defeating manpower with individual armor.

The S-5U missile is fully compatible with existing unified launch blocks. It fits freely into the 57mm rails and uses the same launch controls. At the same time, rocket ballistics data must be entered into the carrier’s weapon control system. In this regard, the new NAR is significantly different from the older ones.

The new “universal” NAR has significant advantages over older products of the S-5 family. Due to a complete restructuring of the design, the IAP specialists managed to increase both the flight and combat characteristics of the rocket. The resulting sample may be of interest to customers. 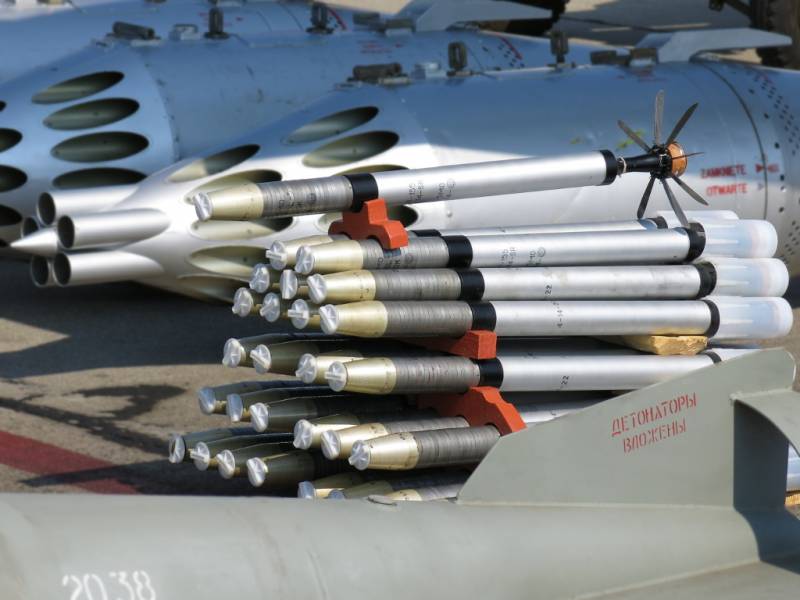 S-5 missiles and launch blocks. Wikimedia Commons Photos
As a positive feature of the project, first of all, the main approach used in its development should be noted. Unlike previous C-5 modernization options, the new one does not provide for the preservation of the main components of the rocket. The body, stabilizer, engine and warhead are newly developed, but in the given dimensions. This approach allowed us to get rid of a number of limitations that impeded the development of the design.

The obvious advantages are the use of new components built using modern technology. This is best manifested in the case of an engine that has received a mixed fuel charge. The resulting power plant is lighter and more compact, but shows higher performance.

S-5U is equipped with warhead with three damaging factors. A number of old modifications of the S-5 were equipped with cumulative and cumulative-fragmentation warheads. In terms of armor penetration, warheads of the S-5U product do not exceed older products, but have an advantage in the number of fragments, and also differ in the presence of incendiary effect. Thus, one can expect a noticeable increase in combat effectiveness across a wide range of targets.

At the same time, the project to modernize the 57-mm unguided missile may not be practical. The S-5U can indeed show enhanced performance and in this respect is ahead of older versions of the S-5. However, even with the help of new technical solutions, she is not able to compete on equal terms with the 80-mm NAR of the S-8 line.

S-8 products are characterized by large dimensions and weight, which creates a certain reserve for achieving higher characteristics. However, large sizes lead to a reduction in possible ammunition. In this regard, the 57 mm system compares favorably with the larger ones.

For yourself and for export.

The main tasks of the S-5U project were successfully resolved. In the existing form factor, they made a new NAR, capable of replacing older products that are not distinguished by perfection and high characteristics. The resulting weapons may be of interest to certain customers. However, certain factors can interfere with the realization of the full potential of such NAR. 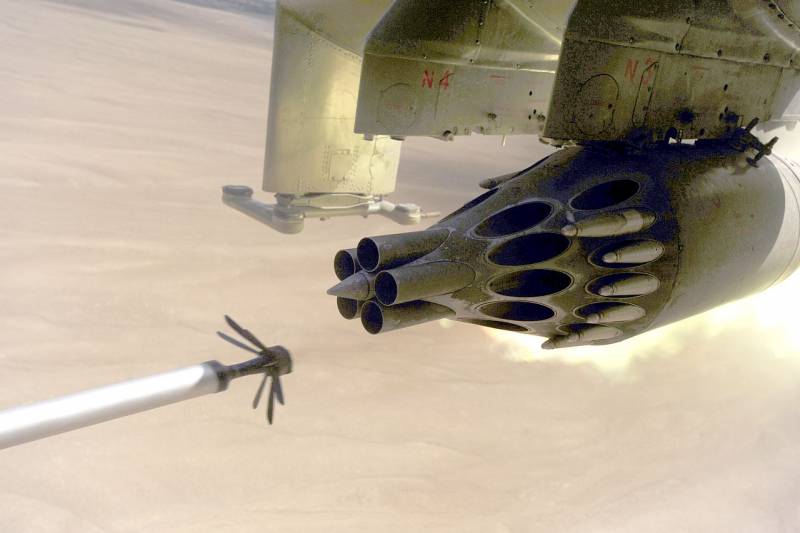 Launch of the S-5 rocket of the old type. Photo US Air Force
Russian VKS may be interested in new weapons, but this is not guaranteed. According to the experience of the Afghan war, the main NAR of our aircraft became the S-8, showing sufficient characteristics. A return to less efficient 57mm systems may not be practical.

Regardless of the opinion of the VKS, the S-5U product should be promoted on the international market. NAR of the S-5 family remains in service with many countries that still consider them to be convenient and effective weapons. These states may be interested in the latest project and order such weapons. Moreover, real interest from a foreign customer is already noted.

Earlier, the IAP reported that the Ministry of Defense of Bulgaria became interested in the S-5U missile. This country still produces under license, operates and sells NAR S-5. In this regard, the modernization project could not go unnoticed. What will result in the interest of the Ministry of Defense of Bulgaria is not yet clear. Perhaps the appearance of a contract for the supply of finished products or the purchase of a license.

The interest of other foreign countries has not yet been reported. However, such news may appear at any time. Soviet / Russian NAR was actively supplied to foreign countries, and any of them may wish to update their arsenals.

Thus, the S-5U unguided missile so far has mixed prospects. From a technical point of view, it has several advantages and surpasses its predecessors. At the same time, in all the basic parameters, the missile is inferior to weapons of other types. As a result, a potential customer needs to carefully study the capabilities of various types of NAR and decide whether he needs a modernized universal S-5U.

A rocket of this type was first shown just a few months ago, and potential buyers still could not decide on their opinion. Whether it will become the subject of supply contracts, and who will order such weapons, time will tell. In the meantime, the S-5U looks like a very curious example, not without a real future.