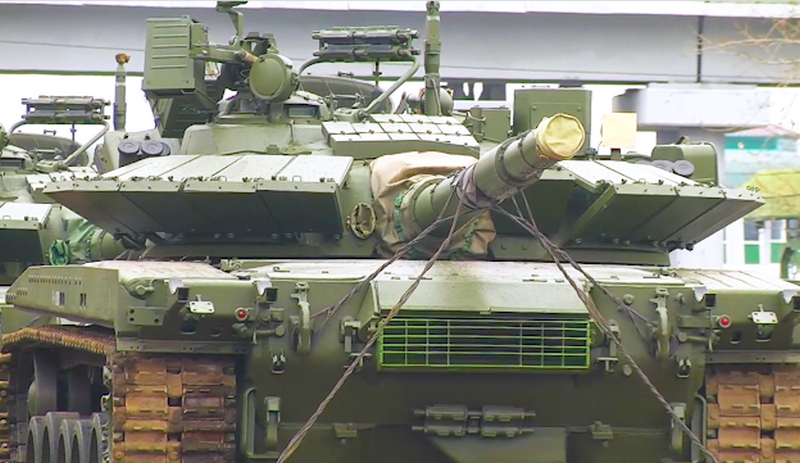 Omsktransmash has fully completed a large-scale state defense order for the supply of tanks T-80BVM, sending the last batch of modernized tanks to the troops. This was reported by the Rostec press service, which includes Uralvagonzavod.


The corporation emphasized that the Omsktransmash JSC fully and on time fulfilled the state contract of 2017 for the supply of modernized T-80BVM tanks to the troops. It is noted that, before being sent to the troops, each combat vehicle passed the necessary tests at the training ground, factory inspection of all systems and acceptance by the customer.

Modernization provides an increase in the basic combat qualities of the machine: firepower, security, mobility and command controllability. Tanks successfully pass all tests - the gas turbine engine does not fail even in the most severe frost
- said the general director of the Omsk company Igor Lobov.

Earlier it was reported that the Ministry of Defense signed a contract with UVZ in 2017 for the modernization of the 62 T-80BV tanks to the T-80BVM level with delivery to the 31 tank in 2018 and 2019.


The T-80B tank and its modifications were produced at Omsktransmash JSC from 1979 to 1991 a year. The latest modification was the T-80BV tank, adopted by the Soviet army in the 1985 year. MBT T-80BVM - a new version of the modernization of the tank, developed in Omsk.

The tank is equipped with a modified gas turbine engine with 1250 horsepower, which allows you to increase the driving performance and mobility of the machine on all terrain and develop speeds up to 70 km / h. The unique properties of the gas turbine engine give the T-80BVM an advantage when operating in low temperatures in the Far North and the Arctic.

The machine, which underwent a deep modernization, is equipped with an 125-mm gun, which has the ability to fire guided missiles, a multi-channel sight, an weapon stabilizer and a driver’s observation device. The tank is protected from fire by a complex of modular dynamic protection and an anti-cumulative lattice screen.

In Soviet times, more than 10 of thousands of T-80 tanks of various modifications were produced. Currently, 3 thousand "eighty", which are considered a strategic reserve in case of war, is located in military warehouses. The decision to de-arm part of the tanks and modernize it was taken by the Ministry of Defense in 2016.
Ctrl Enter
Noticed oshЫbku Highlight text and press. Ctrl + Enter
We are
Reports from the militia of New Russia for 27-28 September 2014 of the yearRussian youth are going to bring up patriotism: conscious necessity or false concern?
Military Reviewin Yandex News
Military Reviewin Google News
64 comments
Information
Dear reader, to leave comments on the publication, you must sign in.