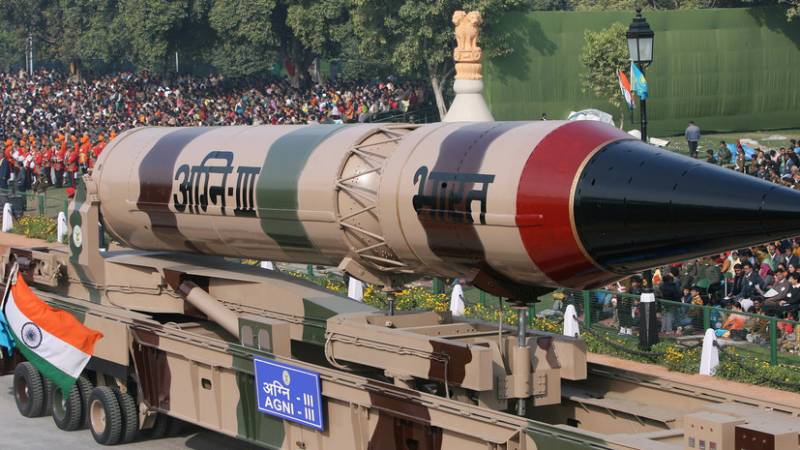 At the beginning of this month, namely, 1 of December, the next launch of the Agni-3 medium-range ballistic missile (BMD) took place in India. It turned out to be unsuccessful, although initially for some reason in the Indian media there was information about complete success (apparently, they had put in advance the information that had been prepared). It would seem, well, start and start. Well, unsuccessful, everyone happens. But in relation to India, everything is somewhat more complicated.

At one time, I had occasion to write more about this ballistic missile defense system, as well as about other Indian missiles. And then this "fire" ("agni" in Sanskrit - "fire"), as well as its subsequent "Agni" with the numbers 4, 5, 6 and the legend about the development of ICBMs "Surya", I called something like " missile profanity. " And this is why it is applied specifically to Agni-3: too few launches took place at this product to be considered used and operational. Agni-3 pushed into the arsenal of the Indian Armed Forces after the fourth launch, and a total of six took place before the launch of 1 on December. This was the seventh. It was distinguished by the fact that it was first held at night, which the Indian press especially emphasizes for some reason. But the rocket doesn’t matter when flying, at night or in the afternoon, and the reason for the unsuccessful launch is not in the night, but because the separation of steps did not occur, the rocket fell 115 km from the coast instead of flying about 2500 km (the exclusion zone in the Indian Ocean had maximum length 2800 km).

By the way, judging by the design of the rocket, where the steps are separated by a lattice farm, the steps are separated according to a "hot" scheme, fire separation. That, in general, the solution is quite outdated and has not been applied to domestic multi-stage combat missiles for a long time. On the same "Topol", say, the separation is carried out by pyrotechnic means and brake solid propellant rocket engines.

The advantages of the fire separation system are as follows:
1) separation speed, which does not give practically gravitational speed loss;
2) a simple sequence of commands for the separation of steps;
3) increased reliability of starting the engine of the second stage, since when starting, axial overloads arise, created by the still working engine of the first stage and ensuring the stable operation of the intake devices of the tanks;
4) the ability to eliminate auxiliary solid propellant rocket motors and reduce the weight of the separation system.

The main disadvantages of fire separation are as follows:
1) large disturbances received by the second stage in the separation;
2) pre-start fuel consumption in the second stage, since the second-stage engine starts even before the connection between the stages is lost;
3) an increase in the mass of the structure due to the layer of heat-protective coating that covers the bottom to protect the first stage from destruction and possible explosion of guaranteed fuel residues;
4) increase in losses on the drag force (especially sharp when the diameters of the steps are different) due to the use of an adapter truss;
5) the effect of hot gases reflected from the bottom of the first stage on the design of the second stage.

But, since Indian missiles are advanced systems only in the stories of the Indian missile industry and the Defense Ministry, such a scheme came up with them.

But what was really new about the unsuccessful launch was that Agni-3 was launched from a trailer, and not from a railway platform. But this could not affect the failure.

The development of the Agni-3 two-stage solid-fuel rocket began back in 2001 with the goal of creating a highly mobile and survivable rocket. True, neither high mobility nor high survival rate were achieved. The Agni-3 infantry-fighting ballistic missile was created as a railway-based missile with a range declared as 3200-3500 km. Although in Indian sources there are applications for 5000 km. But, since there were no launches at such ranges, then, of course, such applications can be ignored. The ballistic missile system has a mass of up to 45 tons (that is, almost like our mobile ICBMs such as "Topol", "Topol-M" or "Yars", which already says everything about the real level of this development), carries warheads weighing up to 2 tons, as usual and nuclear. Probably, a part of the payload is occupied at the primitive level by a complex of means to overcome missile defense - data on this are available. The missile does not have a transport and launch container, which is also a serious drawback for the ballistic missile defense.

Why can't Agni-3 be considered a highly mobile rocket? Just because the railway-based option has nothing to do with our missile trains. It's just a garrison based on rails - the launcher on the platform rolls out from a relatively protected tunnel-shelter, and the rails here only slightly increase the area in which the rocket is likely to be located. Tests of the rocket took place from 2006, all launches were declared successful or partially successful, and after the fourth it was pushed into service. That already caused reasonable doubts about the ability of comprehensive testing of the complex in just a few starts. But, apparently, it was very necessary to have such an argument with both Pakistan and China.

And now the efficiency of this argument is in doubt, and the problems that were not cured at the stage of flight tests come out already in military operation.

It is believed that there are 8-12 Agni-3 launchers, where they are based, is not really known, but most likely somewhere in the north and northeast of India to reach the Chinese east coast.

Mina under the concept of "guaranteed response"

But where do they happen to be able to fly with such a level of testing and reliability - this is a question. But if specialists had previously understood this, for example, in Russia, now storms are raging in the Indian media on this subject. Among other things, they accuse generals and industrialists of conspiring to push unreliable systems into service. Although this, of course, would be difficult to prove, it cannot be ruled out that it was so. The percentage of successful launches in tests at a country that is frankly immature technologically and has a low level of technical culture is very high (the quality of assembly of military aircraft by the Indians, tanks and other systems in their factories has long become a byword).

But it is precisely the “third” missile of the Agni series that is the main medium-range missile in India along with the Agni-2. Worse, it was on the basis of this missile that the more powerful Agni-5 missile was created, declared as "intermediate" between ICBMs and BMDs (5800-6000 range km), although experts estimate the range of the 50-ton three-stage missile no more than in the 4500- 5000 km, and there were no launches for the declared range. This rocket is equipped with a TPK and starts with a trailer, but the weight of this trailer with a rocket in the TPK exceeds 140 tons, it is much more than the Yars PGRK APU and even probably a little more than the Chinese SPU for DF-41 (which is so heavy also not from good life). That is, such a trailer is difficult to consider highly mobile, it is denied access to roads, and such a launcher can ride only on the highway within the base, not far from the shelter. "Agni-5" also flied all its 6 times successfully. And now, it seems, it may turn out that the successes there are exactly the same, they fear in India.

The Agni-3 technologies were also involved in the creation of a new SLBM for Indian SSBNs of the Arikhant type, built on the basis of the documentation of the Soviet project APRK pr.670M, and with technical assistance from Russia. At the moment, K-15 Sagarika SLBMs with a ridiculous range of 750 km are used there, but re-equipment is also planned, instead of 12 K-15 - 4 K-4 with a range of up to 2500 km. True, while this rocket flew three times, once accidentally, and only overcame 700 km as much as possible. But now, in its design, they will look for unresolved flaws that will be revealed as a result of the investigation of the Agni-3 accident. In addition, even one emergency launch with such a penny of tests is already a lot, statistics are badly spoiled.

The official nuclear doctrine of India states that the country adheres to the position of reliable minimum deterrence and non-use of nuclear weapons first and will take massive retaliatory measures in response to the first nuclear strike. That is, the concept of a retaliatory strike, moreover, "deep" - after the completion of the enemy’s first strike. India does not have an SPRN, the time it takes to prepare the complexes for launch is very long (for solid fuel systems - 15-20, or even 30 minutes), so there are no other options for them. It is important here to focus on guaranteed assurance that India will respond to a nuclear strike. For a country like India, which supports the doctrine of non-use first, its arsenal must remain functional and very reliable. And what happens now? It should also have high survivability, which is also difficult to achieve with such basing schemes.

Indian media and experts now fear that this failure could send a signal to Pakistan and China that India’s nuclear arsenal is unreliable, so they may not be afraid of India’s retaliatory strike. Moreover, the adversary may even consider it attractive, either use conventional weapons to deliberately escalate the crisis, or deliver the first nuclear strike without fear of massive Indian retaliation, considering their arsenal unreliable. In general, for a young nuclear power these problems may turn out to be a cold sobering shower, which will cause the Indians to stop telling themselves and others tales about ultra-high accuracy and other characteristics that are unthinkable with the obvious technological backwardness of products and systems. And start working on the bugs. Or everything will remain as it is.

However, the Pakistani arsenal is no better in terms of reliability, and their survival is exactly the same, which, of course, is a deterrent. And Chinese is also far from the United States in this matter, and even less so from Russia.