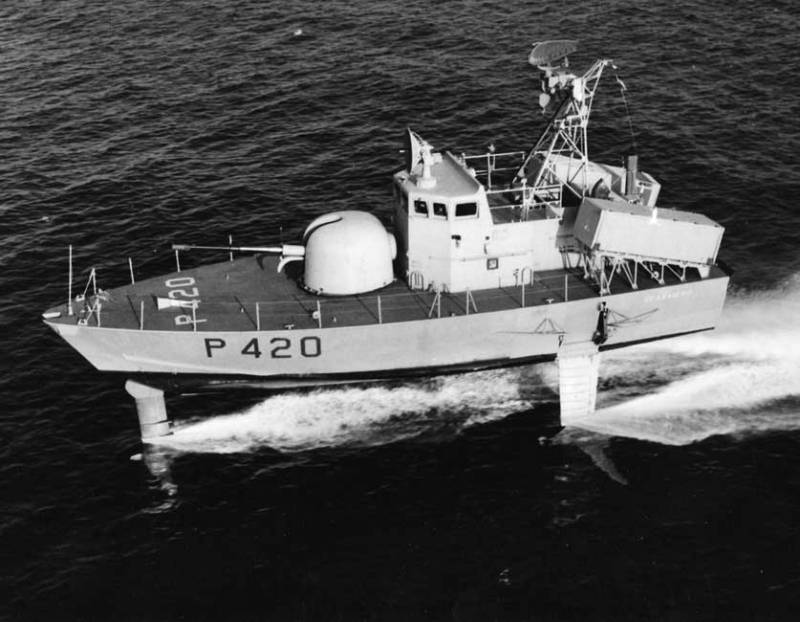 The author has always been interested, so to speak, in small forms in navy. And he simply could not pass by at one time quite promising, albeit crude, development in the form of an Italian hydrofoil missile boat of the Sparviero type. Moreover, in his humble opinion, these boats are just a mental exception in the ranks of the Italian fleet, which almost always built exclusively elegant, even sophisticated ships on its slipways. And suddenly this “freak” appears, looking like a penguin, put on figure skates. Nevertheless, this boat did not lose interest in his person.


The direct progenitor of the Sparviero was the USS Tucumcari US hydrofoil experimental boat. True, the USS Tucumcari did not carry missile weapons on its board, limiting itself to artillery. This boat was developed by Boeing. On its basis, hydrofoil technology was developed, as well as an assessment of the operation of a jet propulsion device. USS Tucumcari even managed to show itself in the Vietnam War, but his century was short-lived. Already in the 1972 year, i.e. just four years after the start of operation, the crew rammed a reef at a speed of over forty knots during exercises in the area of ​​Vieques Island (Puerto Rico). And during the rescue operations, the Yankees overdid so much that they finally ruined the ship. Repair was found unprofitable. 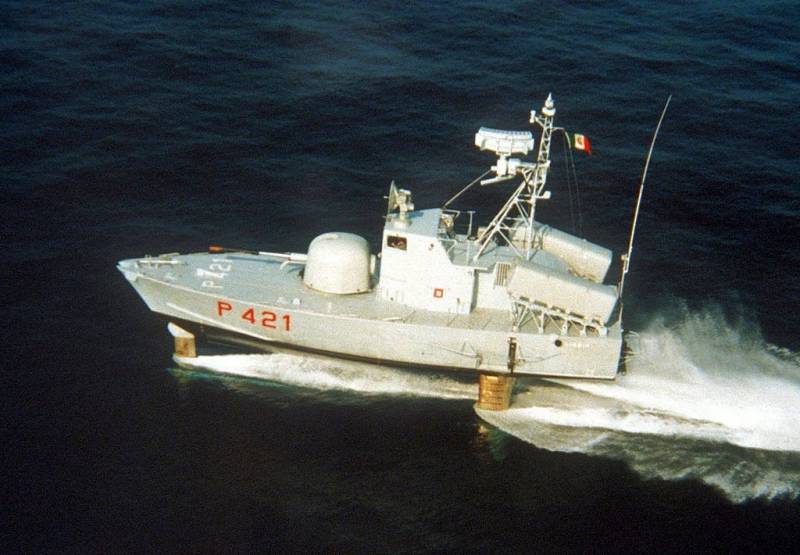 Boat Sparviero
When the USS Tucumcari joined the US Navy in 1968, the Italians immediately became interested. Already in the 1970 year, the Italian Navy ordered Alinavi to develop and build a prototype hydrofoil boat, the American experience will serve as a starting point for this. The prototype received the name "Sparviero". And since it was rocket boats that came into fashion, changes were made to the original American version.

The Italian boat inherited from the Americans a hydrofoil system developed by the Boeing and consisting of one wing in the bow and two in the stern. Naturally, in different types of movement two different engines and two different engines were used. Under displacement mode, the regular Isotta-Fraschini ID38N6V diesel engine was operated, and the propeller was the propeller. When the boat switched to hydrofoil movement, the Rolls-Royce Proteus 15М560 gas turbine engine (5000 hp) with a water jet came into operation.

Given the cruising range and so on, the Italian military commanders planned to use these ships for short operations requiring high speed boats. That is why no housing units and especially the galley on the ships were not going to be equipped in principle. 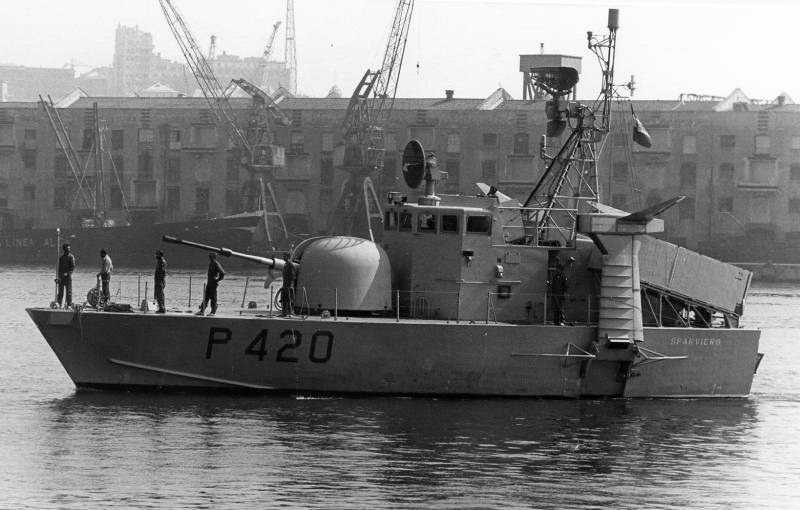 The initial armament consisted of two Otomat anti-ship missiles at the stern behind the superstructure and one 76-mm Oto Melara gun on the bow.

Life at sea and on paper

The prototype “Sparviero” was laid at the shipyard in La Spezia in April of the 1971 year, and launched on May 9 of the 1973 year. The direct commissioning of the boat took place in the 1974 year under tail number P 420. During sea trials and direct operation, this boat justified the declared performance characteristics, but the start of the construction of a full-fledged series was constantly delayed.

In the 1975 year, the question was again raised not only about ordering a whole series of boats of the Sparviero type, but also about the additional purchase of two larger hydrofoil ships of the American-made Pegasus type. In the 1975 year, the Pegasus was being built by Boeing in Renton, Washington. These ships were supposed to work together as part of the standardization of weapons of the NATO bloc. But this group was never created. 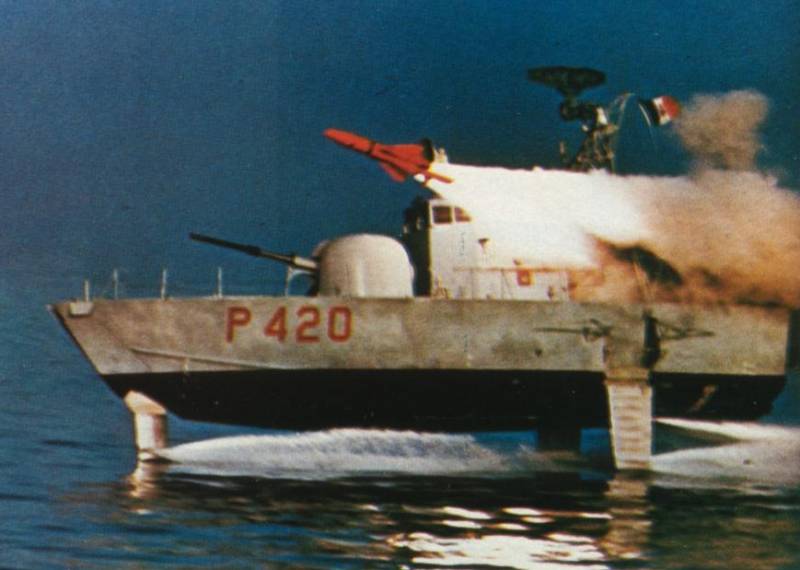 In 1977, command was reduced to resolving the issue of mass production of Sparviero. At the same time, the order was placed at the Fincantieri shipyard. The "new" boats received an advanced Otomat missile launcher with a Teseo target designation system. They also planned to install more powerful Allison gas turbine engines on boats, but this was not implemented.

These boats failed to show themselves in all their glory. Until the middle of the 90's, ships of the Sparviero type carried quite calm, mostly patrol, service to themselves. The high-speed stinging strike by rocket armaments, which was so calculated by the command, the ships delivered only as part of the exercises. At the moment, all boats are decommissioned.

At the beginning of the 90's, when Italians quietly sent Sparviero to metal, the Japanese became interested in boats. The country of the rising sun wanted to replace its completely obsolete torpedo boats of the RT-11 series - RT-15, with fast Italians, developing speeds up to 40 knots. 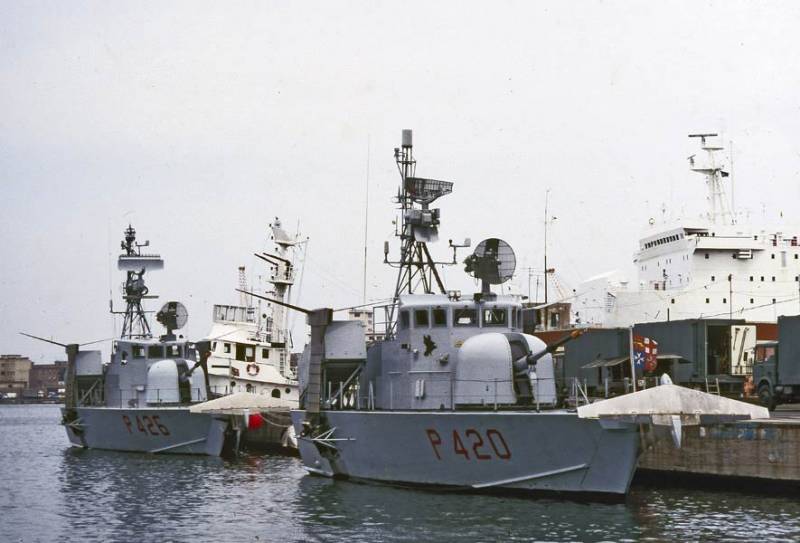 Sparviero hydrofoils
In 1991, the Japanese entered into a licensing agreement with Italy for the production of hydrofoil missile boats. Naturally, changes were made in terms of weapons. Instead of an 76-mm gun, an M61 Vulcan rapid-fire gun was installed on the nose, and instead of the Otomat complex, anti-ship missiles of the 90 type were delivered. And, of course, the new boats provided more modern radars. The gas turbine engine was also replaced with a General Electric LM500 engine in 5200 hp.

In the 1992 year, both boats were launched. At the same time, they were not provided with their own names - only PG 01 and PG 02 numbers. It would seem that the ships that have sunk into oblivion got a second chance. But suddenly problems with financing began. 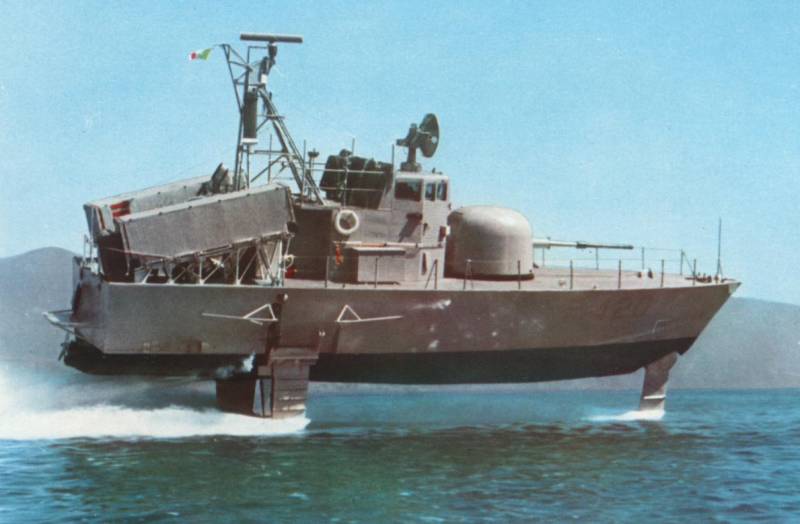 The next boat was laid only in the 1993 year under the number PG 03. In 1994, when the third boat of the series left the stocks of the shipyard Sumitomo, the command had already completely cooled to these hydrofoil ships. As a result, they did not begin to order a fourth boat, and the project was minimized.

The Japanese trinity honestly crossed the line of the 2000 year, and in the 2010 year the last chick of the Italian-American company of Japanese shipyards was safely decommissioned.