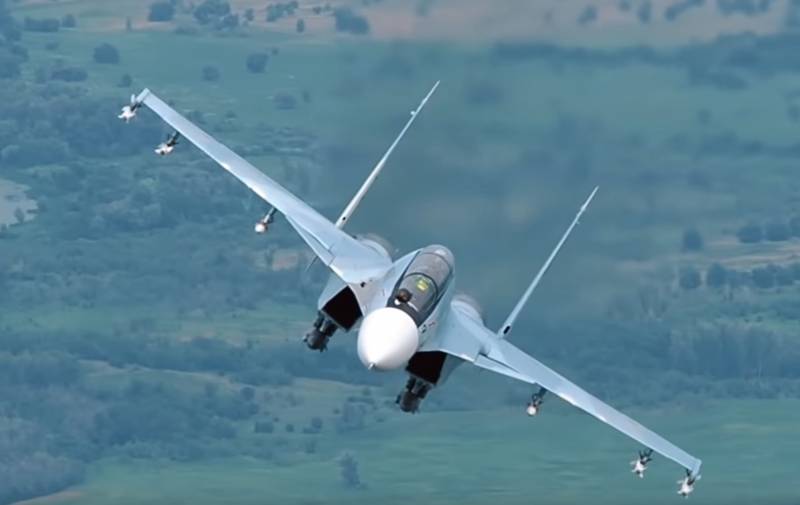 In the nineties, designing the first modifications of the Su-27, no one could have imagined that the new machine would become a symbol of rebirth and change. However, Su-30 and its subsequent versions have changed the world view of our defense industry and future VKS. The super-maneuverable, intelligent, all-weather, modern and still endless number of epithets is hidden behind such a short name Su-30СМ, about which the Polygon team of the T24 channel will tell in detail today.

In the 1991 year, the famous Russian Knights aerobatic team was formed, which for 25 years piloted the Su-27 aircraft in its spectacular experiments with the sky. In 2016, the receiver replaced it, and Vityaz began to operate the Su-30СМ. According to its flight and combat characteristics, this aircraft is considered one of the best multi-role fighters in the world. He is able to gain dominance in the air and at the same time work on the ground. New aircraft demonstrate new capabilities in piloting. Pilots reveal the potential of each car. It was the super-maneuverability of the “thirty” that allowed the Knights to significantly expand their arsenal of aerobatics.

However, before the Su-30СМ got to the "Russian Knights", he had a long way to go. The starting point in the work was distant India, from which back in the 90-ies came a request to create a unique aircraft according to very exacting requirements. According to its characteristics, the combat vehicle was supposed to be decades ahead of the previous generation. To develop and manufacture such a fighter for the aviation industry of our country then was akin to a miracle. And it happened. In the process of creating the aircraft, of course, I had to refine a lot, but the design engineers coped with the task.

The Su-30SM is manufactured at the Irkutsk Aviation Plant. An enterprise can produce up to 30 cars a year. The aircraft, honed over the years of mass production and brought to ultimate performance, began to arrive in 2012 in aviation parts of the Air Force of Russia and naval aviation. To date, the Su-30SM is the most massive fighter in the Russian troops, numbering more than 100 units.

Only the sky, only the wind ahead

The combat load of the Su-30СМ has changed not only quantitatively, but also qualitatively. In addition to the standard "classic", the 30 millimeter built-in gun, the fighter at 12 suspension points can now carry more than 8 tons of weapons. It may include freely falling and correctable bombs, unguided and guided missiles of various classes, including anti-ship X-31A capable of destroying surface ships with a displacement of up to four and a half thousand tons.

The fighter passed his baptism of fire during a military operation of the Russian Armed Forces in the Syrian-Arab Republic. This was the first serious test of the flight performance and combat capabilities of the new aircraft. In Syria, the versatility of the Su-30СМ has been severely tested. A fighter could dozens of missions with different tasks in one day, one of which was the destruction of the militants' infrastructure and sniper work on terrorist armored vehicles. Another important task of the fighter in Syria was to cover the bombers, who worked on the positions of gangs, allowing the Syrian-Arab army to return the cities captured by terrorists. Also, the Su-30СМ provided the safety of civilian aircraft with humanitarian assistance. They controlled the airspace and carried out long-range reconnaissance. And in the event of a direct collision with the enemy in the sky - the fighter could not only stand up for itself, but also protect other aircraft. Su-SM30 is an unusual fighter, it is in some way a “pack leader”, able to control a group of combat aircraft - direct them to the desired square and share intelligence. A fighter is even capable of performing part of the functions of an aircraft with early warning radar. The modernized “thirty” has a multifunctional Bars radar, which allows you to spot enemy fighters at a distance of up to 140 km. At the same time, the radar takes on tracking up to 15 air targets and directs them to 4 weapon. The results of the Su-30СМ in Syria - tens of thousands of destroyed terrorist sites. And although the active phase of the special operation has ended, nevertheless, fighters continue their combat duty at the Khmeimim airbase.

In addition to Russia, a large number of countries buy the plane: India, Algeria, Malaysia, Kazakhstan, Belarus and others. For each country, the Su-30СМ has a unique profile, because the principle of "open architecture" allows the use of various aircraft equipment.

The serial machine is equipped with AL-31FP engines with a controlled thrust vector. It is they who make the Su-30SM super maneuverable. Rotary jet nozzles can deviate up to 15 degrees, which allows you to control in all three axes: pitch, roll, yaw. Engines can operate stably both in super maneuverability modes and at near-zero speeds. To increase maneuverability and increase lift, the Su-30СМ is equipped with front horizontal tail assembly. It can be deflected automatically, thereby ensuring a stable flight at large angles of attack. The flight itself is carried out by an electrical control system. EDSU allows you to perform complex aerobatics at low and high speeds. The system processes commands from the control stick and transmits electrical signals to the rudders, stabilizers and rotary nozzles of the engines. The super-maneuverability of the Su-30СМ gives new opportunities in piloting an aircraft. A new approach and still undiscovered aerobatics allow developing tactics of aerial combat.

It is impossible to stop engineering. The improvement of the complex called Su-30СМ continues to this day. Using the latest developments and algorithms, the library of intellectual power of the fighter is growing, as well as updating the range of weapons. The Su-30СМ platform has become a platform for the implementation of the most advanced aviation solutions.