Two powerful strikes: how a Soviet submarine collided with a US aircraft carrier 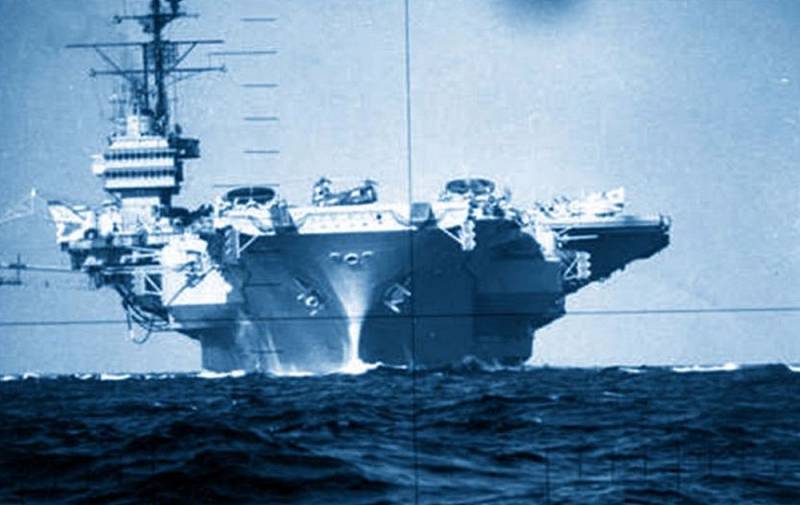 During the Cold War, Soviet submarines and American carrier strike groups (AUGs) were constantly looking for each other and practiced training attacks. On 21 of March 1984, such actions ended in a clash. The American aircraft carrier USS Kitty Hawk (CV-63) rammed the Soviet submarine K-314, after which both ships went for repair. What preceded these events, and what happened in their wake?

In March 1984, the naval forces of the United States and South Korea began the next joint Team Spirit exercises in the Sea of ​​Japan. A key component of the American group was the AUG led by the Kitty Hawk ship. To the group and her Aviation entrusted with the solution of all the basic tasks, from providing air defense to the search for underwater objects. 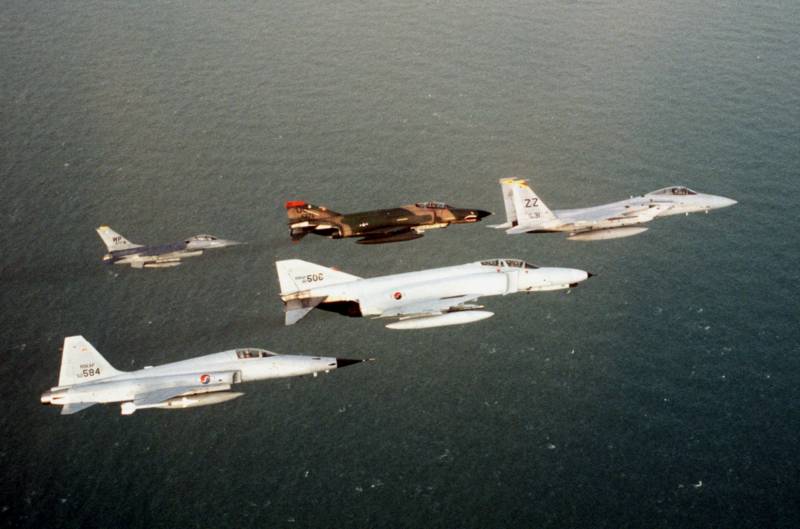 US and South Korean aircraft at Team Spirit exercises, March 15 1984. Photo by US Navy
Major international teaching could not but attract the attention of the USSR. Pacific Command fleet ordered several ships and submarines to go to the area of ​​maneuvers to detect and track the actions of the US Navy. Covert, long-term surveillance of the AUG was assigned to the nuclear submarine K-314, project 671 "Ruff" under the command of Captain 2nd Rank Alexander Evseenko.

A few days after receiving the order, K-314 was in a given area and searched for ships of a potential enemy. The aircraft carrier group was successfully discovered and followed, monitoring and sending data to the headquarters of the fleet. Such work continued for a week. 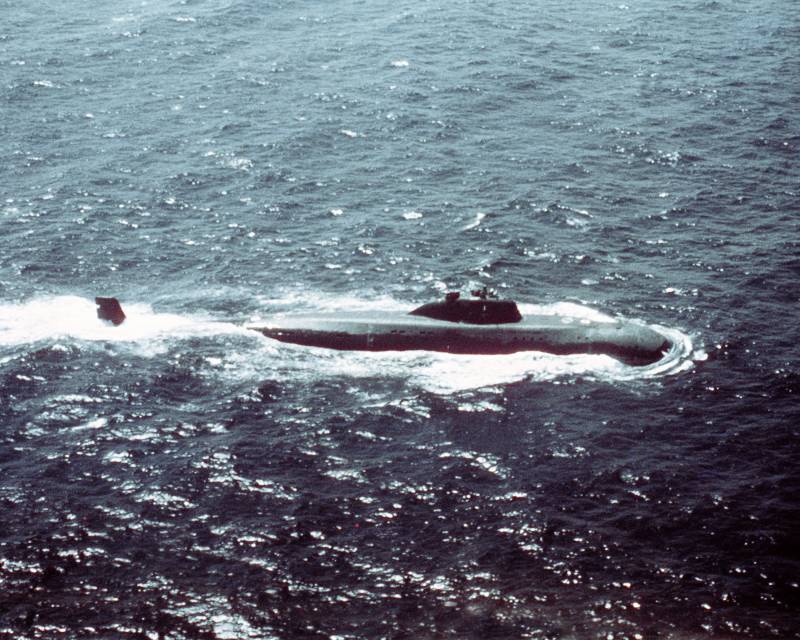 Submarine project 671 in the water. US Navy Photos
Later, the US Navy published data on the progress of the exercises. It was alleged that the SUG with the USS Kitty Hawk (CV-63) timely discovered the Soviet submarine and also conducted surveillance. In addition, ships and aircraft of the 15 group once simulated an attack on an underwater target.

Submarine Pacific Fleet continued to monitor the American AUG without losing sight of it. However, during the next communication session, K-314 fell behind its target. For safe ascent of the submarine, it was necessary to increase the backlog from the observed ships, and those, taking advantage of the situation, broke away for 15-20 miles.

After completing the exchange of data, K-314 had to catch up with a likely enemy. The submarine developed a high underwater speed, but this led to an increase in noise. American hydroacoustics spotted the boat, and the ACG command took action. Flights were suspended, radio-electronic equipment turned off, the group went into the territorial waters of South Korea.

A little later, the US Navy ships again showed themselves. The Vladivostok BPK, engaged in a tracking operation, discovered AOG in 150 miles off the coast. In the evening of March 21, the K-314 submarine was able to enter the aircraft carrier area and began its search.

In 22: 10 local time, the submarine began preparations for the communication session and reached the periscope depth. Using a periscope, the commander examined the water area and found several surface targets. At a distance of 20-30 cable, the side lights of the ships were observed. At the same time, the US Navy ships moved towards the boat. 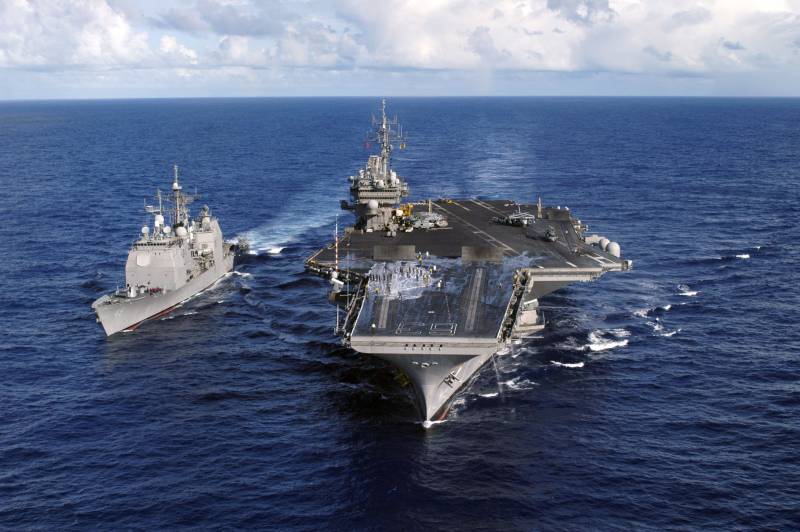 Kitty Haw aircraft carrier escorted by a missile cruiser, 2004 g. Photo by US Navy
The commander ordered the start of an urgent dive to avoid a collision. Shortly after the start of the dive, the submarine felt a strong blow. After a few seconds - a second powerful push. It was clear that the submarine did not have time to go to a safe depth, and it was hit by some of the American ships. As we learned later, it was a Kitty Haw aircraft carrier.

K-314 immediately surfaced behind the American warrant, the crew was already inspecting the materiel and preparing for a possible struggle for survivability. A couple of helicopters were lifted at the USS Kitty Hawk (CV-63). They found and examined the Soviet submarine. Aircraft carrier commander Captain David N. Rogers later spoke of a willingness to help those in distress. However, the inspection of the boat also had reconnaissance purposes.

Fortunately, serious survivability measures were not needed. The ship was damaged, but there was no leak or fire. General ship systems worked, retractable devices continued to function. In this case, the runout of the line of the propeller shaft was observed. Upon further examination, torn damage to the light body and deformation of the propeller were found.

A surface aircraft carrier also received significant damage. The submarine proportional to the skin of the bottom and made a hole several tens of square meters in size. Damage to tanks for aviation fuel, some of which leaked into the sea, took place. Fortunately for the crew, the vital structural elements remained intact, and the kerosene did not catch fire. Later, a fragment of the propeller and several pieces of the rubber coating of the submarine were found in the hole.

Due to damage to the screw and shaft, the K-314 lost speed and needed the help of a tugboat. “Kitty Hawk” could continue independent movement, but the performance of combat missions was difficult.

Submarine K-314 while tracking the American AUG, March 1984. Photo by US Navy
According to various sources, during the collision there was a risk of a nuclear incident. On board the American aircraft carrier there were several dozen tactical nuclear weapons. The Soviet submarine also had several missiles with a similar warhead. In a collision, all these products were not affected, and the whole situation ended only in mechanical damage.

Help hastened to two damaged ships. With the help of other ships, the submarine and aircraft carrier went to base. K-314 was taken to Chazhma Bay and docked for repairs. USS Kitty Hawk (CV-63) was sent to the port of Yokosuka (Japan) for preliminary repairs. Then the aircraft carrier went to the Subic Bay base in the Philippine Islands. A few months later, the ships returned to the combat structure of their fleets after repair.

The United States and the Soviet Union conducted their own investigations and did not exchange information. However, the conclusions seemed to be similar - although they had different results.

The American side considered that the Soviet submarine was the culprit in the clash. According to the US command, it was the K-314 crew that was unprofessional, as a result of which the boat was in the way of a larger surface ship, which led to a collision. However, they did not express any claims and did not demand compensation. 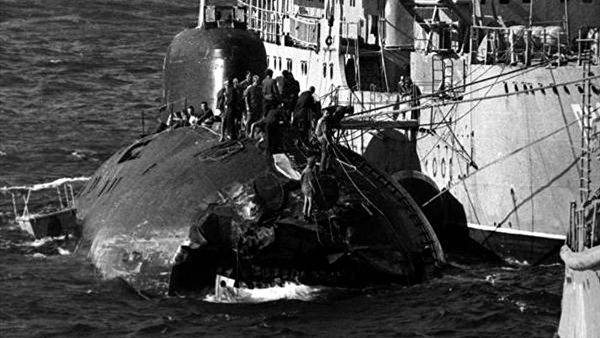 Submarine K-314 after surfacing. Damage to the light body is visible. Photo Vpk.name
As participants in the incident later recalled from the Soviet side, when they returned to the base, the fleet command literally cursed them and urged them to prepare for the consequences. The K-314 commander was removed from his post and transferred to the shore. No further action was taken.

As follows from the available data, the collision of the submarine K-314 and the aircraft carrier Kitty Hawk 21 on March 1984 was a direct result of an unfortunate set of circumstances. There were no direct and obvious violations on the part of the incident participants, but some of their actions, combined with external factors, led to well-known consequences.

The command of the Pacific Fleet criticized the commanders of the submarine for not being able to timely detect several large surface targets - moreover, at a minimum distance. Why this happened is unknown. There are several different versions, from negligence to the specifics of the water area.

The probable enemy’s submarine getting into the center of the warrant and its subsequent collision with an aircraft carrier is an occasion for uncomfortable questions to sonar speakers and commanders of the American AUG. In fact, a potentially dangerous underwater object was missed at a distance of confident shooting - and even closer. It is not difficult to imagine what this could lead to in a real conflict.

After the repair was completed, the K-314 submarine returned to the Pacific Fleet. However, a full-fledged service did not last too long. Already in 1985, the ship had to be sent for repair again due to an accident at the main power plant. After several years of service, in 1989, the ship was withdrawn from the Navy and put to sediment. 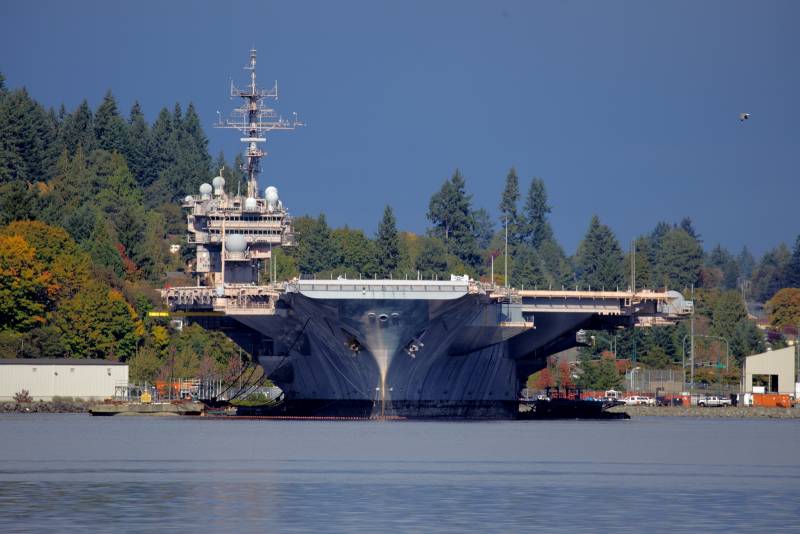 USS Kitty Hawk Aircraft Carrier at 2017. Photo by Navysite.de
K-314 was the tenth representative of the 671 Ruff project, but finished the service first. Soon, the process of decommissioning the remaining submarines of this type began. Disposal started only in the two thousandth. The last to go was K-314 - it happened already in 2010-11.

The aircraft carrier USS Kitty Hawk (CV-63) returned to the San Diego base in August 1984 and soon returned to combat service. The ship regularly worked in different parts of the Pacific, and in 1987-88. made a voyage around the world. After that, the aircraft carrier was put on scheduled repairs and modernization, due to which the service life was extended by 20 years.

Campaigns, training and combat missions, etc. lasted until the end of the two thousandth year. In 2009, the ship, which had served for nearly half a century, was withdrawn from the Navy. Despite numerous statements, Kitty Hawk has not yet been sent for recycling. And the public is seeking to turn the ship into a museum.

Based on the results of the 21 incident of March 1984, the command of the fleets of the two superpowers made conclusions and took action. It seems that all this led to the required results. At least since then, aircraft carriers have never rammed submarines.