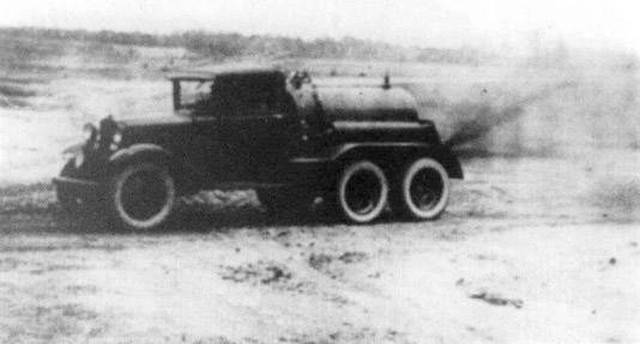 The experimental machine BHM-800 performs terrain processing. Photo Aviarmor.net
At the end of 1930, the Experimental Design and Testing Bureau of the Office of Mechanization and Motorization of the Red Army (OKIB UMM), headed by Nikolai Ivanovich Dyrenkov, began work on the topic of chemical armored vehicles. Subsequently, the Compressor plant was involved in this area. The result of these works was the emergence of several interesting prototypes - but not one of these projects went into series.

On an affordable chassis

In the early thirties, our country struggled with a shortage of vehicles and other equipment, which is why the UMM RKKA worked on the issue of using affordable vehicles as a basis for armored vehicles of different classes. So, the first Soviet chemical tank designed by OKIB was built on the basis of the Kommunar tractor. In a similar way, it was planned to make new armored cars.

For the new chemical armored vehicles, OKIB immediately chose two available automobile chassis with a 6x4 wheel arrangement. These were Ford-Timken and Moreland TX6 cars. Their characteristics corresponded to the design loads, and in addition, they were available in sufficient quantities and could be used in new projects. By that time, Ford-Timken and Moreland had mastered some military specialties, and now they were to become the basis for chemical armored cars.

In mid-1931, OKIB UMM began the development of two armored cars on different chassis. The TX6 was based on a model called the D-18. A similar development on Ford-Timken was called D-39. The projects provided for the removal of all "unnecessary" full-time parts, instead of which new devices of one kind or another were mounted.

Armored cars had to have bulletproof protection made of rolled sheets with a thickness of 6 to 8 mm. From the armored panels the engine cover and the cabin were assembled. On the cargo platform of the chassis was an armored casing for the target equipment. Thus, the D-18 and D-39 armored cars could work at the forefront, giving the crew and cargo protection from bullets.

During the construction of the D-18 and D-39, the power set, propulsion system, transmission and chassis of the base chassis did not change, due to which the basic characteristics remained at the same level. However, most of the carrying capacity was spent on the armored hull and chemical equipment, which affected the mass of the liquid load.

On the D-18 armored car, a cargo area with reservation was given for two tanks with a total capacity of 1100 liters. Only one 39-liter capacity was installed on the D-800. Pumping equipment of the type KS-18 manufactured by the Compressor plant was responsible for the spraying of chemicals. It consisted of a stern horseshoe-shaped spray for spraying BOW and a spray column for degassing or placing smoke screens. The operation of the spraying devices was provided by a centrifugal pump driven by an engine.

Trucks "Ford Timken" - one of the bases for chemical armored cars. Photo Kolesa.ru
Depending on the task, the D-18 and D-39 could take on board various liquids. The spray for BWA provided infection of the strip up to 25 m wide; the speed of movement should not exceed 3-5 km / h. During degassing, the spray column treated a strip 8 m wide.

The combat characteristics of armored cars directly depended on the tank capacity. So, D-18 with a large supply of chemicals could create an infection strip with a length of 450-500 m or conduct degassing of a site with a length of 350-400 m. The smoke-generating mixture S-IV was enough to set the curtains for half an hour. The D-39 armored car had a tank of lower capacity and corresponding characteristics.

Prototypes D-18 and D-39 did not have any weapons for self-defense. Perhaps in the future they could get a DT machine gun on one or another installation.

The crew consisted of only two people. The driver was responsible for controlling the machine, and the commander had to control the operation of chemical equipment. With a machine gun, the commander could also become a shooter.

The development of the D-18 and D-39 machines began in mid-1931, but soon encountered organizational problems. A prototype D-18 was able to build only in the autumn of the following 1932. A little later, completed the assembly of D-39. To save both armored cars were built without the use of armor. Their bodies were made of structural steel to obtain the calculated mass.

December 1, 1932 OKIB UMM was disbanded. Two projects of chemical armored vehicles were transferred to the design bureau of the Compressor plant. He participated in their development as a supplier of key components, and therefore had to cope with further work. Also in the future, this company could create new projects.

At the turn of 1932-33. Polygon tests of two armored cars took place. The machines showed satisfactory performance and coped with the tasks of spraying a conventional BOV or degassing the terrain. At the same time, Ford-Timken and Moreland TX6 car chassis did poorly on rough terrain. In addition, the characteristic architecture and insufficiently strong reservation limited combat survivability. 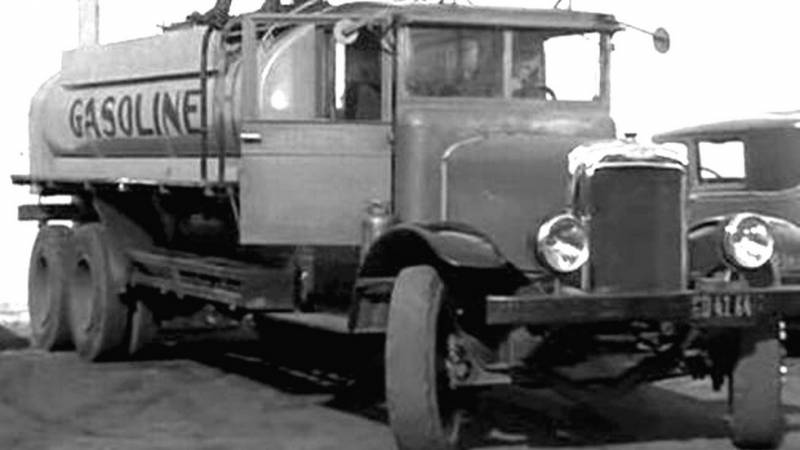 Tank truck based on the Moreland truck. Photo Kolesa.ru
In its current form, D-18 and D-39 were not of interest to the army, but could become the basis for new developments. The Design Bureau of the Compressor plant took into account the experience of testing two samples from OKIB UMM and made conclusions, after which it created its own machines of the same class.

In the first months of 1933, the Compressor began developing its own chemical armored car. This sample remained in stories under the names BHM-1000 and BHM-1. The letters in the index meant “armored chemical vehicle”, and the numbers indicated the capacity of the tanks with the BOW or the project number. From the point of view of general ideas, the BHM-1000 project repeated the development of OKIB. The differences were in the list of used units.

The Design Bureau "Compressor" considered it inappropriate to use a foreign chassis. The basis for the BHM-1000 was the domestic truck AMO-3. Such a chassis was not inferior to import in carrying capacity, but they decided to leave it without armor. Perhaps it could be added after testing and determining the approximate characteristics.

In place of the standard body AMO-3 placed a metal tank with a capacity of 1000 liters. The KS-18 complex with a pump and spraying devices was also installed there. The use of such a system made it possible to maintain performance at the level of previous machines. Also, the possibilities and functions on the battlefield have not changed.

Armament on the prototype was not installed. For its installation, it was necessary to finalize the standard cab of the base truck, and such a step could be considered unnecessary at the current stage of work.

In the same 1933, the chemical machine BHM-1000 without armor and weapons passed the test. The characteristics of the chemical equipment were confirmed and generally complied with the requirements. However, problems arose with the chassis again. The AMO-3 truck even without armor did not always cope with the load. The machine could hardly move off-road, and the installation of protection would completely ruin its mobility.

Product BHM-1000 with such qualities was not of interest to the Red Army. However, it was ordered the production of a small batch of such machines for use as training. This order was completed in the shortest possible time, and soon the chemical units got the opportunity to practice combat work on completely new specialized equipment. 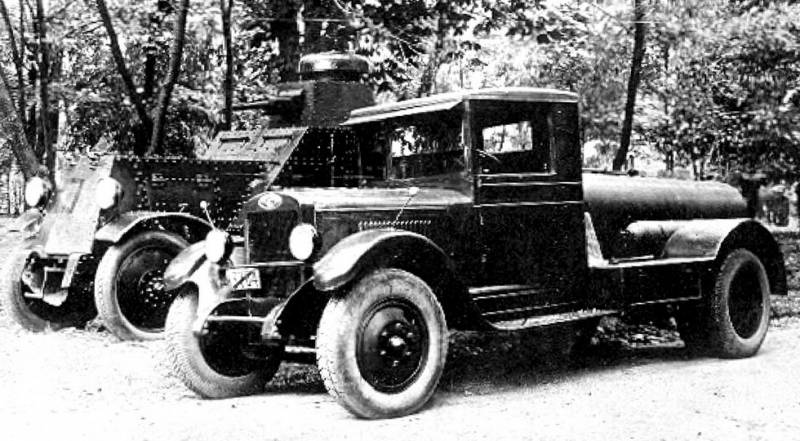 Auto-filling station ARS-3 based on AMO-3 is a later example of chemical engineering. Photo by Alternathistory.com
Shortly after the BHM-1000, a prototype called the BHM-800 appeared. It was built on a Ford-Timken chassis using the same solutions as in the previous project. A 800 l tank and a KS-18 system were installed on a serial truck. It was assumed that the BHM-800 in characteristics will be similar to the BHM-1000 - with the exception of the parameters associated with the payload.

The unarmored vehicle BHM-800 passed the tests and showed approximately the same results as the BHM-1000 and D-39. The target equipment again confirmed its characteristics, and the chassis again showed the impossibility of normal operation on the roads. The future of another project was in doubt.

After completion of the field tests, the BHM-1000 and BHM-800 in their original form were slightly modified. As an experiment, they were equipped with protection in the form of bodies of structural steel. As in the OKIB projects, armored plates with a thickness of 6-8 mm were used. The installation of the casings led to an increase in mass and a decrease in mobility. As such, the two “armored chemical vehicles” had no future.

The projects of OKIB UMM and the Compressor plant made it possible to test a number of not very successful ideas, as well as to find solutions suitable for further development. As for the experimental equipment, all four prototypes were apparently rebuilt into trucks for their intended use.

Designers from the bureau of the Compressor plant confirmed in practice that the KS-18 system is capable of solving the assigned tasks, however, for its successful application, a new base car is needed. The search for new chassis began, and in addition, the development of a special armored hull corresponding to the assigned tasks began.

The result of all these works was the appearance of a chemical armored vehicle KS-18. It was not without flaws, but it nevertheless corresponded to the requirements of the customer and was even built in a limited series. In addition, the so-called filling stations - machines for degassing the terrain on an unprotected chassis. Thus, the D-18, D-39, BHM-1000 and BHM-800 projects nevertheless led to the desired results, although indirectly.

We are in Yandex Zen
D-15 chemical tank: unsuccessful platform
Armored cars "Russo-Balt Type II" Nekrasov-Bratolyubova
27 comments
Information
Dear reader, to leave comments on the publication, you must to register.