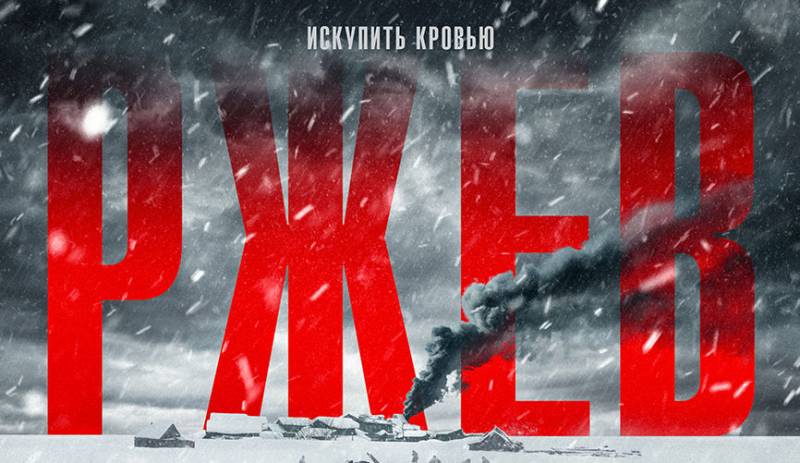 You know, dear readers and connoisseurs of good cinema, if this film had the usual set of stamps, it would be just the bottom. The usual bottom is from Russian cinema. But since this is not comme il faut, blows must be present, heavy and solid.

The novelty, dear ones, is that the film was shot very funny. The company, on the basis of which the plot develops, does not have a single foreigner. Exceptionally purely Slavic faces. This film differs sharply from hundreds of other films in which Russians, Ukrainians, Georgians, Armenians, Kazakhs, Uzbeks, Tajiks, Tatars fought hand in hand.

In short, ethnic cleansing is evident. Russian Moscow under Rzhev was defended exclusively by Russians. Well, as part of the Ukrainian Front, Auschwitz was liberated exclusively by Ukrainians. The rest, obviously, did not go through political casting.

Of course, an exception was made. Naturally, as without a Jewish political instructor? No way. We ticked it was.

There was a Ukrainian. And especially in order to introduce a Ukrainian-almost-traitor into the film, the role of assistant specialist was invented.

Specialist, of course, a rare cattle that does not use brains at all. But he entertains himself in the full program by sending fighters to the field, under German machine guns, to collect the German leaflets dropped from the plane. And then he searched the soldiers in search of these. Naturally, I found one fighter, and the entertainment should have continued either by shooting, or something else.

But why he needs an assistant is generally incomprehensible. The special officer himself did a good job of annealing half of the film and openly made him shudder to doubt the adequacy of the scriptwriter. Running around the field under machine-gun fire is something ...

So, he doesn’t need an assistant, but he was. Ukrainian. Here, you see, what is the point? Slav fighters - they are all through and through good heroes, even a convict, a lover of rummaging around in his pockets. They are on one side of the barricade. But the special officer, the Jewish political instructor and the Ukrainian assistant executioner - on the other.

In general, this is a feature of the author of the book, Kondratiev. The rank and file and staff are all saints, and the higher in rank and position, the blacker.

And here is a new feature of the Russian culture: the Ukrainian ... no, it cannot be said that he is directly a traitor. But the person is slippery and vile. And he loves trophies, and is cowardly, and did not become a traitor just because he was afraid to shoot his boss and self-cut out of the plot.

In general, if in general, the film is a classic collection of stamps of anti-Soviet and Russophobic propaganda. In the best traditions of our time.

And what, really, is present ALL that is in manuals.

In addition to the stupid special officer (well, a representative of a special department cannot be a priori smart) and his assistant, of course, there is a Jewish political instructor. In general, Arseniy Semenov played well, these shaking hands, screaming, drooling in all directions ... Well, yes, it's disgusting.

The criminal line is also not forgotten. A representative of the community of former prisoners is also represented, as without him? Naturally, he steals from his own people, he rummages through his pockets, drags everything that lies badly, but can not be compared with the trinity of negative heroes. He's kind of like his own. Type, repentant.

Combat ... Well, I immediately realized that the team that made the film had no idea about command and control of the army and the army as a whole. Well, there are circumstances in life that do not allow serving. 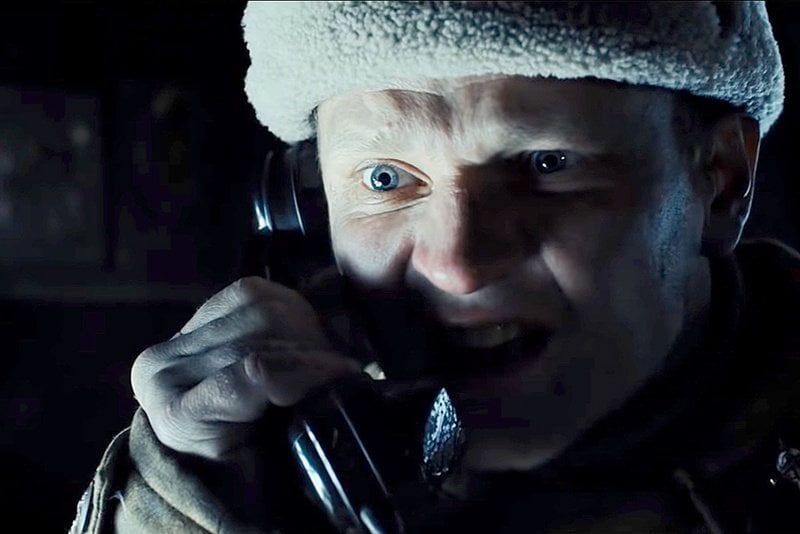 So, a battalion commander is a type who simply surpassed the trinity that we talked about above. He gets high from sending his subordinates to death. Twice per movie, by the way. This is if someone did not get it the first time.

And while the company is being destroyed in Ovsyannikovo, at the command post of the battalion, undercover tanks (appear in the frame), in cozy dugouts, fathers-commanders are deigned to consume alcohol, without really bothering with a snack.

In short, I’d like to say one thing about the preparation of the shooting team: apparently, they studied according to German leaflets. The first was about Jewish political instructors, and this is the second, which "Your commanders are leading you to slaughter ..."

In general - well, a very clumsy image of an artificially created slaughter by individual scum. And there the viewer had to figure out for himself, from the battalion commander and above, who and how fought.

And what, my companions and I managed to understand the plan. Having looked at it (as stated in the advertisement: “This is a tough male movie in which there is no place for sentiment”), I realized that we lost a million human lives that were lost in battles, including near Rzhev, solely because that Soviet fighters, units and units of the Red Army were commanded through one scum, cowards, and careerists. From the bottom to the top. And that is precisely why the enemy in Berlin was not beaten in August 1941.

And the driven companions are faced with a difficult choice. Either lose the company, following a meaningless command order, or withdraw your people from mortar fire, but at the same time leave occupied positions and go to the tribunal for breaking the order. 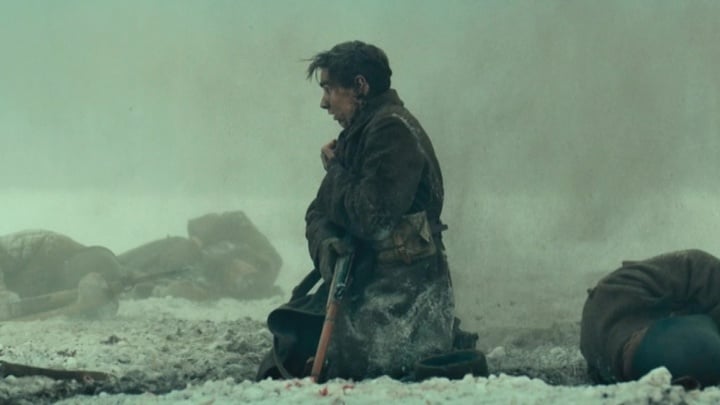 Some kind of "orders are meaningless, resistance is useless, give up or die." I don’t know who wrote this, but obviously the fans are either Goebbels or his students.

In general, to sort through all the stupidities and absurdities of the film - it will take a very long time. Unforgivable a lot, the so-called "film" itself does not deserve it.

Can I praise something? Can. The battle pictures are pretty well done. With bloody puddles and streams torn off limbs. With heads pierced by bayonets. The head is the most convenient place for poking with a bayonet, right?

The only thing I would like to say about the part of the film left over from the stupidity and meanness of the commanders: God, where are the consultants? Where are the real military men who used to be able to tell you "how it was." Well, it’s clear that the TOY war veterans cannot be invited, but there are real officers with real combat experience!

I realized that no one in the movie-servicing team who did not serve did not know what a defensive fighter might do. If the film is rallies and searches for trophy drinks. Everything, there are no more duties and cannot be.

Moreover, the rallies are not interrupted even by the Germans who came to the war.

Well, why didn’t anyone explain to the “battalion commanders from the cinema” that the political officer looks like an idiot, persuading the frozen soldiers in the trenches not to sleep? And they still fall asleep, because they have been fighting for three days without a break.

Where is the comrade general or colonel who would explain how everything really was? That at night in the frozen trenches there was only a shift on duty, but combat protection was put up. And the rest of the staff huddled at least in the dugouts, where "the fire was beating in a cramped stove." FROM weaponsready at the first signal to jump out for any action.

But the idea was to show the political leader, not in vain consuming his ration. Supports, like, personnel and all the rest.

That's all, I don’t want to poke around this dirt anymore, enough.

All these "cuming-outs", which the movie is just stuffed with, are all confessing to each other on the eve of imminent death, this crap and meanness are tired.

I have only one question. Who ordered this?

Who ordered the filmets, wretched and vile, based on Vyacheslav Kondratyev’s book “Atone with Blood” (1991 year)? I will not evaluate the book itself, which the author wrote fairly fairly after the war.

And in general, from sergeant Kondratiev, who was awarded the medal “For Courage” for taking command and taking the fighters on the attack from the very village of Ovsyannikovo in the winter of 1942, to the author of the book Kondratiev, who shot himself in 1993, there’s an abyss.

In which an attempt to portray something collapsed.

But the film "Rzhev" was released, where, in fact, about the city of military glory, Rzhev itself was not specifically mentioned. But this is just a wonderful film about the war, consisting of rallies, meanness, democracy, looting and "cuming outs."

In general, as it was not worthwhile to go to something created at the expense of the budget in this country, it is not worth it. Isolated attempts by Chaliopa and (really looking forward to) Ugolnikov do not count. For the most part, a foul-smelling turbidity pours from the screens, humiliating and insulting memory.

If the task at the state level is simply to ruin everything Soviet, to decommunize the Soviet legacy, then maybe just say so about it? How honestly and openly they did it in Ukraine.

On May 9 beautiful words are spoken, and all of the 364 of the rest of the day in the year all these "Rzhevs", "Stalingrad" and so on.

Maybe it's time to change something?

Until Private Ryan Saved The World In One Helmet?

“It's hard to predict what the audience’s reaction will be. Whatever it is, I am proud that we did it. No one has yet touched on the theme of Rzhev in feature films. ”

It would be better if you, Madame Yurchenko, would not touch this topic. With such hands ...

Yuri Ozerov did not work out of you. From none. What only confirms the film "Rzhev", in which about Rzhev himself and the events of that time not a word.