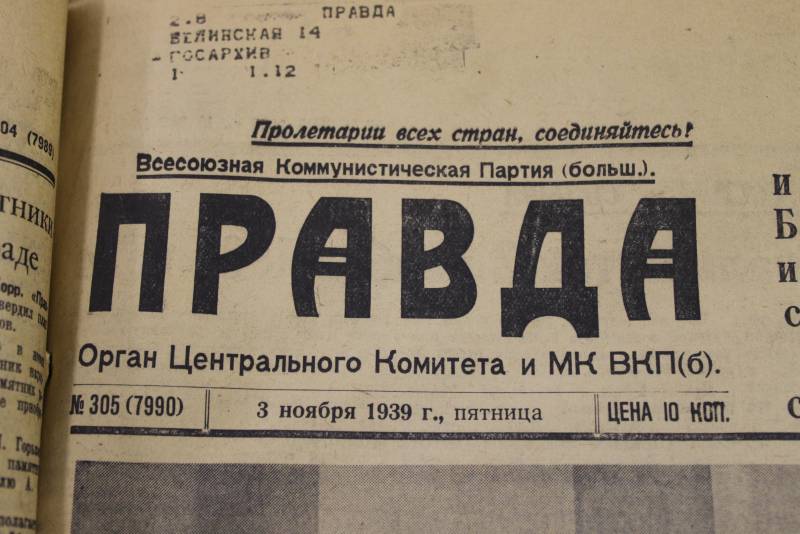 The newspaper with which our story begins

Neither the jesters nor the fools scribblers
Do not embarrass your hearts anymore.
Your homeland was taken more than once -
We have come to return it to you.
Lyrics: Anatoly D'Actil (Frenkel), music: Daniel and Dmitry Pokrass

History in documents. Not so long ago, a series of articles devoted to the Soviet-Finnish war 1939-1940 took place at VO. The text of the articles was accompanied by photographs allowing you to see what was happening with your own eyes, and this is always a very correct decision by the author. However, serious materials of this kind, in my opinion, still need to be supported by documents and links to at least some sources. After all, whoever wrote about this war, in what kind of popular magazines no articles on this topic were found to me! There were materials in the newspaper “Secrets of the Twentieth Century”, in the Rodina magazine — well, just a lot, the Voprosy istorii magazine — even wrote with the help of documents from both sides, even the magazine Around the World — and he published several articles about “ Winter war! ” But where to get such materials? You can’t run into the archives of Moscow Region, where “everything is”. In order to get into the archive of the OK VKP (b) Leningrad, one must live there, the same story with the Russian State Humanitarian Foundation, in a word, finding something new on this topic is very, very difficult today. What about the photo? There is a Krasnogorsk archive of film and photo documents. For those who live in the Volga region, the KAPrivo archive is available, there are also very interesting photographs there, but this is all the time and money, which, as a rule, does not pay off with popular articles. However, there is a source that all historians should know and use in order to make their materials more interesting, to show events through the eyes of people of that era, through the prism of their perception and ... political conjuncture. This source, accessible to everyone and everyone: materials from the body of the Central Committee of the All-Union Communist Party of Bolsheviks / CPSU - Pravda newspaper Every communist had to write it out and check its life path with its advanced articles. And if you don’t check, then ... what kind of communist are you then ?!

And today, we’ll try to tell you about the events of those distant years with the help of photocopies of the materials of this particular newspaper. Each photo will be given a short comment. The purpose of such comments is to draw attention to some interesting points of these newspaper materials, which a not very attentive reader (and there are, unfortunately, those on VO) may skip or leave without proper attention. So… 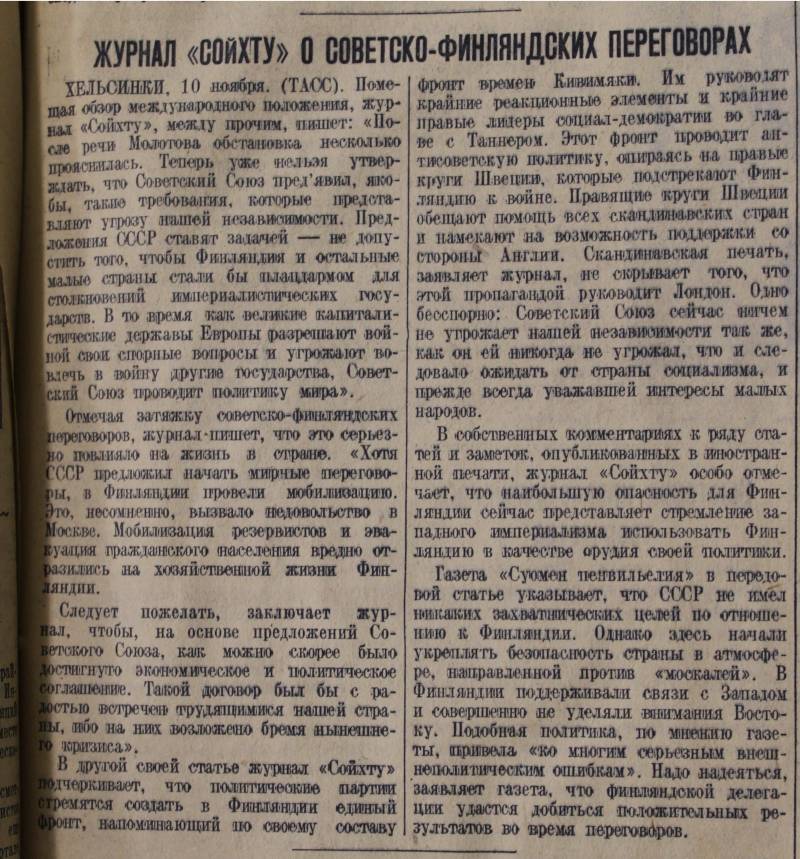 On November 10, this interesting article appeared in the newspaper. And she ... is really interesting in that it is an attempt to show the reader of Pravda that we have friends in Finland too, and of course London is to blame for Finland’s aggressive politics! 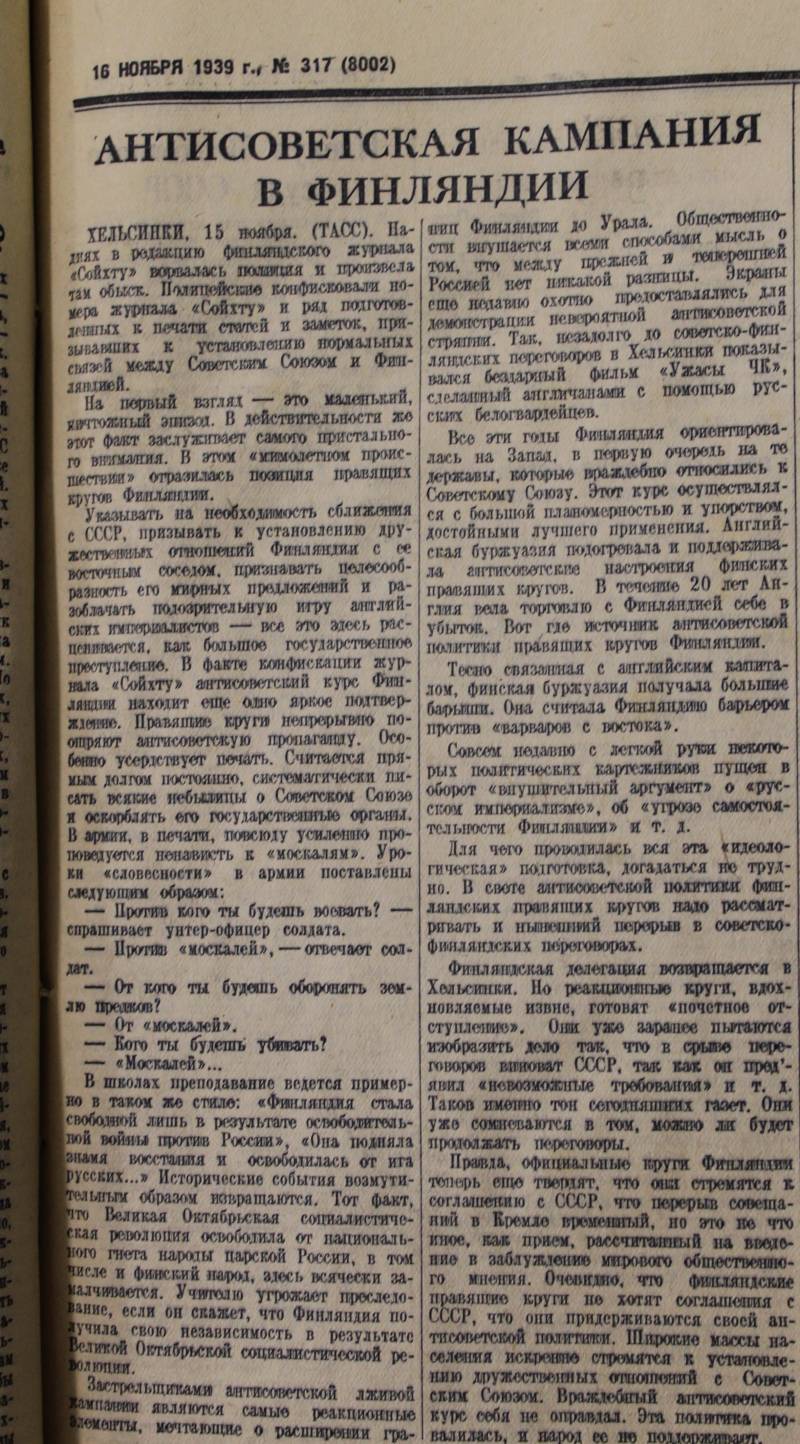 Detailed material about the anti-Soviet company in Finland. All is not bad, of course, but why is there a direct speech? As a rule, direct speech is introduced into the text of an article only when the author wishes to emphasize that he heard it himself. “Words” from words of others is not very professional 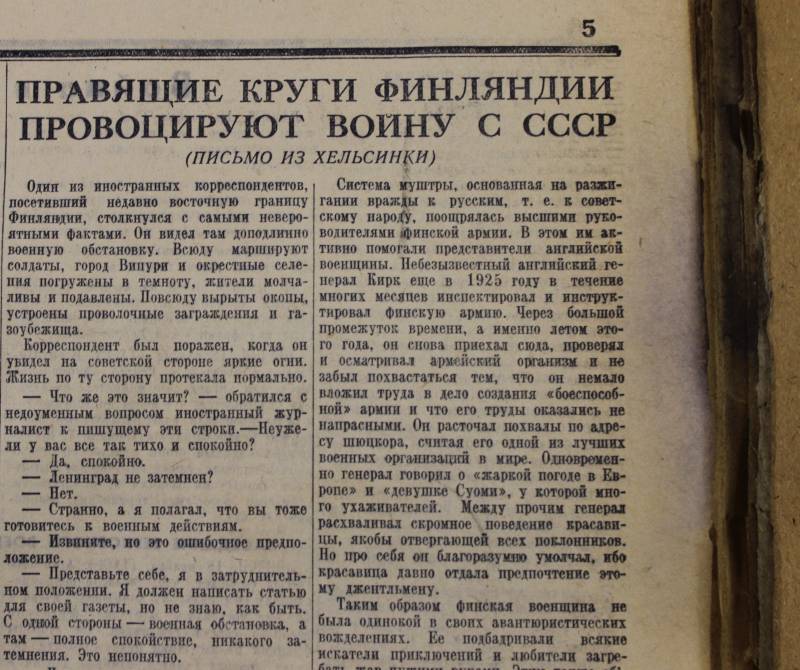 "Letter from Finland." One would expect confidence in such materials. But it is precisely they who usually cause the most distrust. Who led the conversation described in the material, where ... In a word, it would be better not to write like this than to write 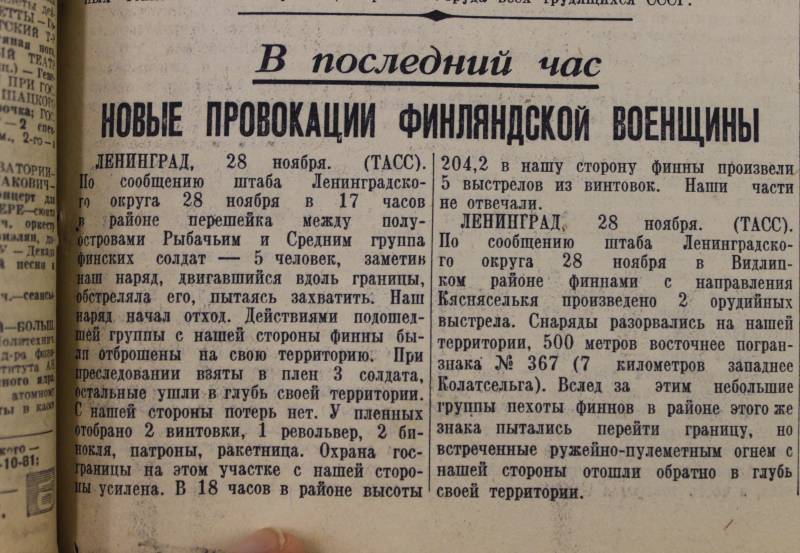 War usually begins with such incidents. Especially when the war really wants a stronger side! 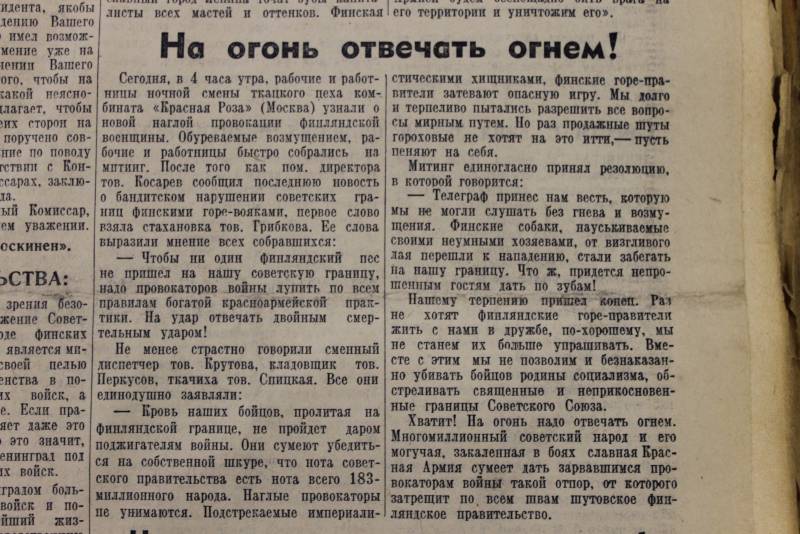 That was the indignation of our workers! Turned off the machines, quit work, and went to a rally! But only in the documents of the party archives there are ... instructions that such meetings should be organized, the number of participants should be rewritten, and reported to OK, who said what. That is - everything is organized and directed. And the question is - why are the rulers of Finland still pea jesters? What was their buffoonery? It seemed that they were shooting seriously! 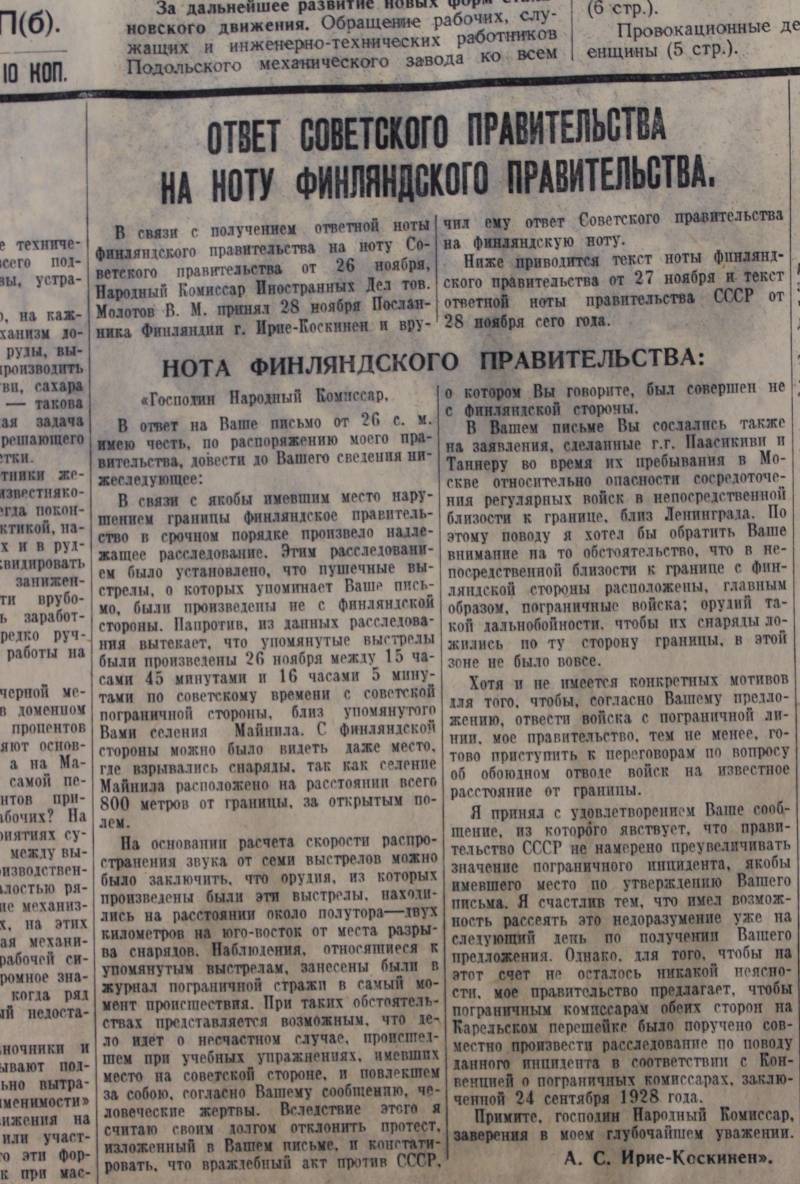 But this is a note from the Government of Finland to the Government of the USSR regarding well-known events. There was also a response note by Molotov, but it is not interesting, therefore it is not given here. However, it is available in Pravda. Who wants can easily find and see 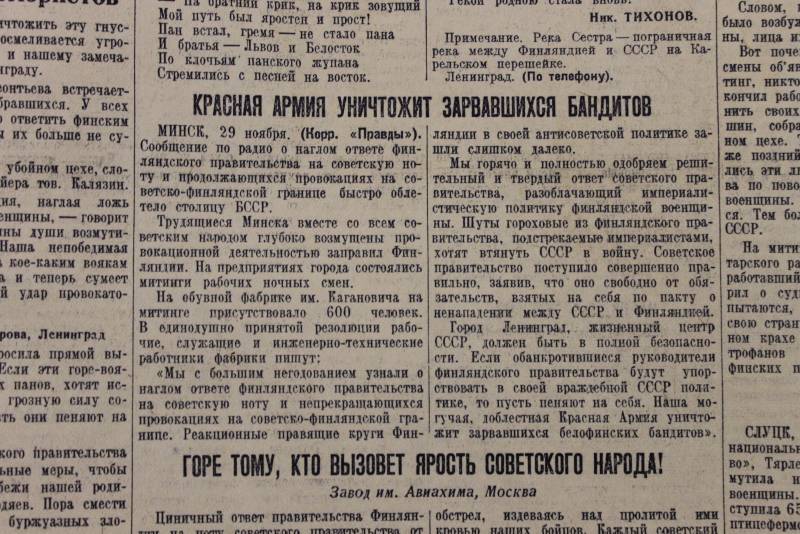 The message of popular indignation from Minsk. And here are the "pea jesters." Right ma'am, as we would say today 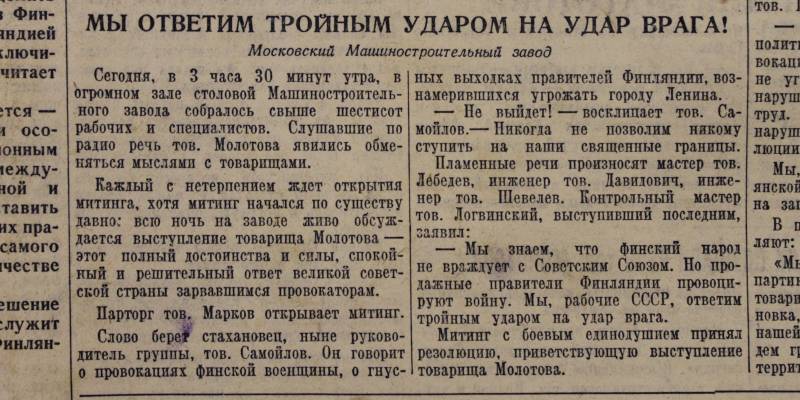 At night, the factory discussed the speech of Molotov. And when did you work? At work, you do not have to chat, but work with full dedication! Here is the best way to mischief the evil enemy, and from all these "discussions" he is neither hot nor cold 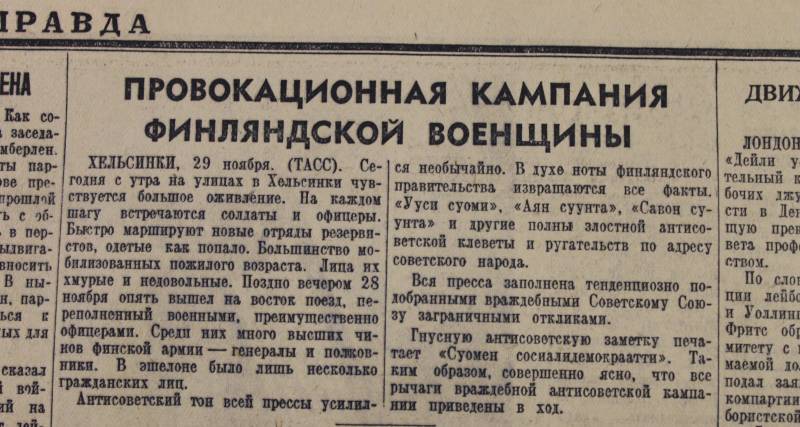 Since our citizens were deprived of the opportunity to read the foreign press, they had to take a word of it all ... 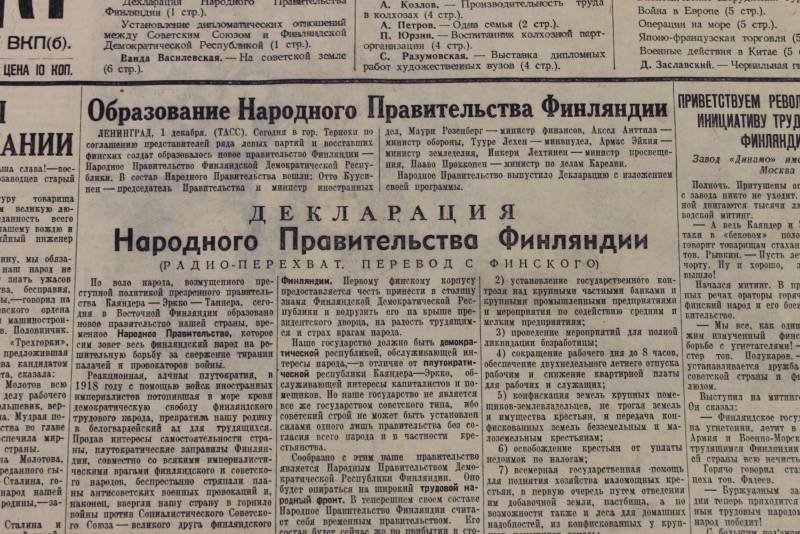 But this is just a masterpiece! Radio interception, and even translation from Finnish. You might think that the Finnish communists did not know the Russian language and could not directly contact the Soviet government on the radio? What was the money allocated to the Comintern for then?

How all is trite. We create a puppet government, help it gain a foothold in the country, then it “pays debts”. Reception is as old as the world! 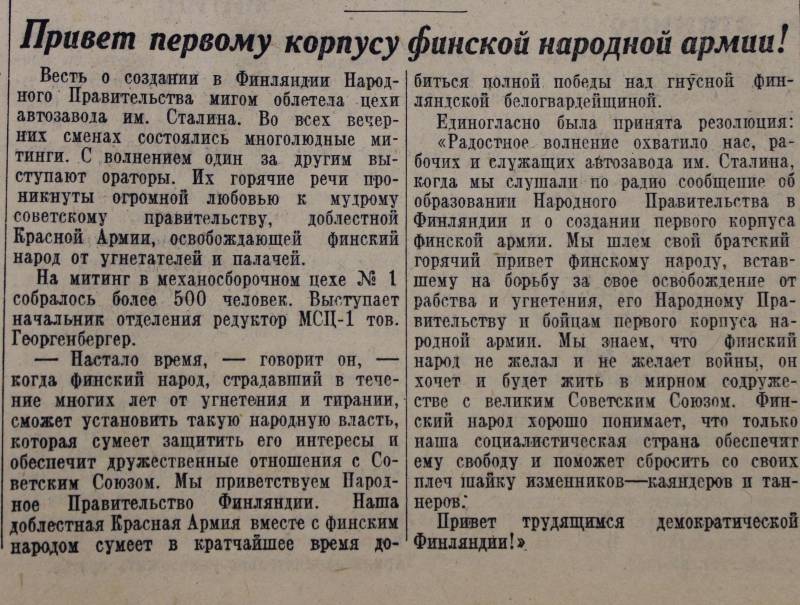 Soviet citizens joyfully worry that an increase has occurred in their fraternal family of peoples! 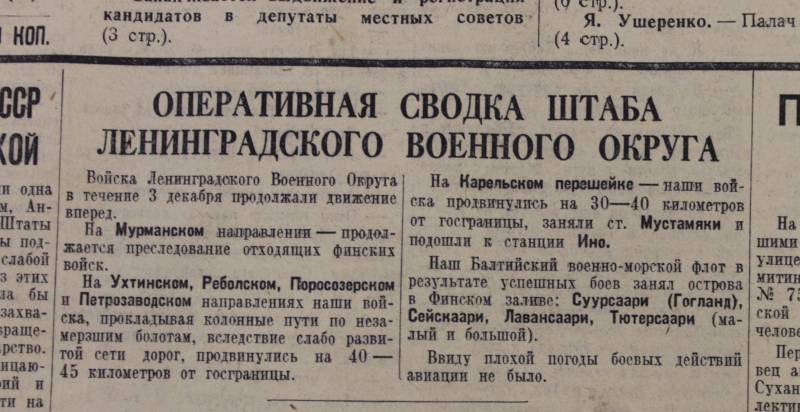 Front-line reports appeared in the newspaper. At first they looked like this ... 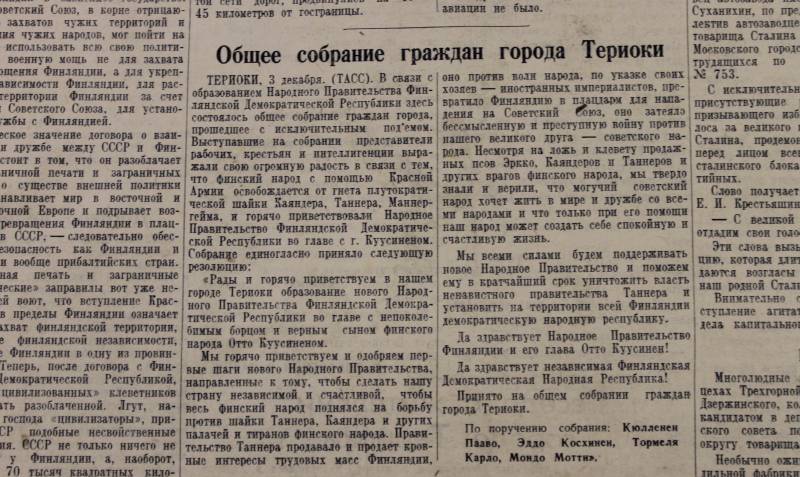 We approve, and freed Finnish citizens approve too! 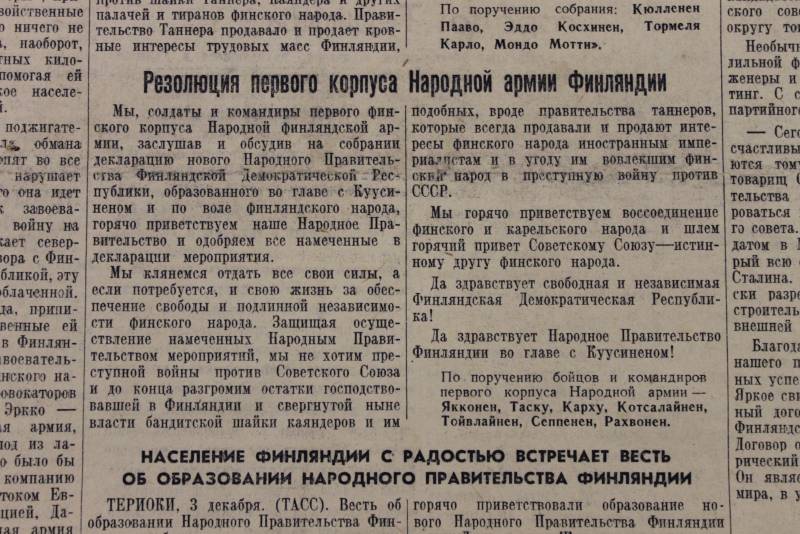 Soviet Finns in print are active! 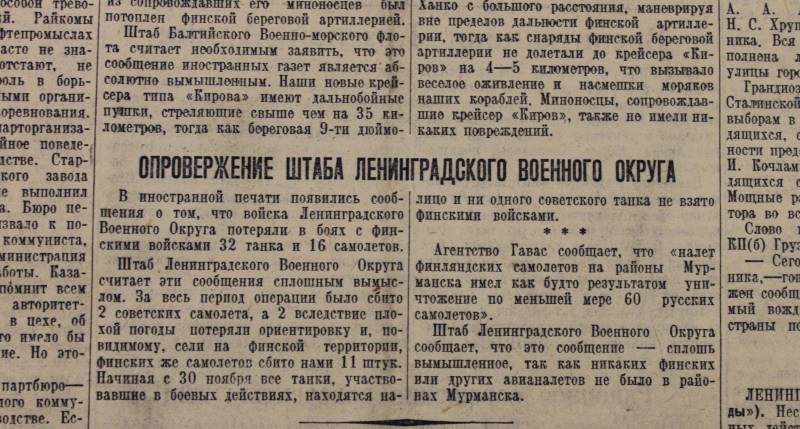 But such messages could not be given at all. Because there were fighters and commanders who knew well how everything was “in truth”. And they could very well have blabbed later: by drinking, by stupidity, for the sake of a red word, or even out of harm. Their word bore weight! They fought! And ... how after their words to believe the "Truth", the newspaper of the Central Committee of the CPSU (b)? 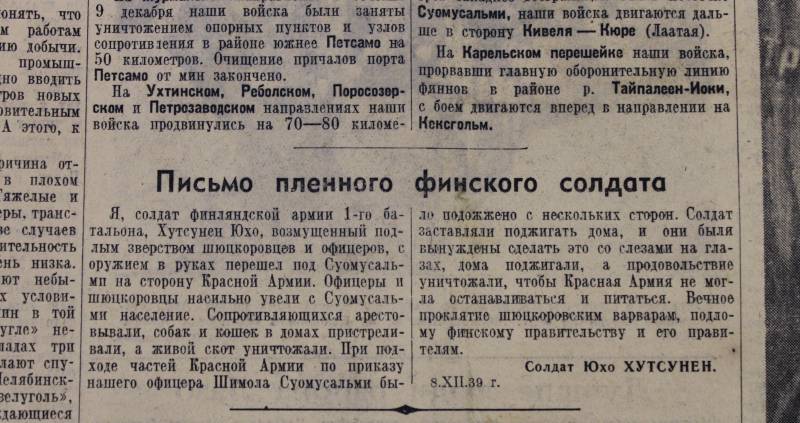 Cats and dogs ... sorry. Relatives of this stupid Hutsunen, if he really existed, do not mind at all! 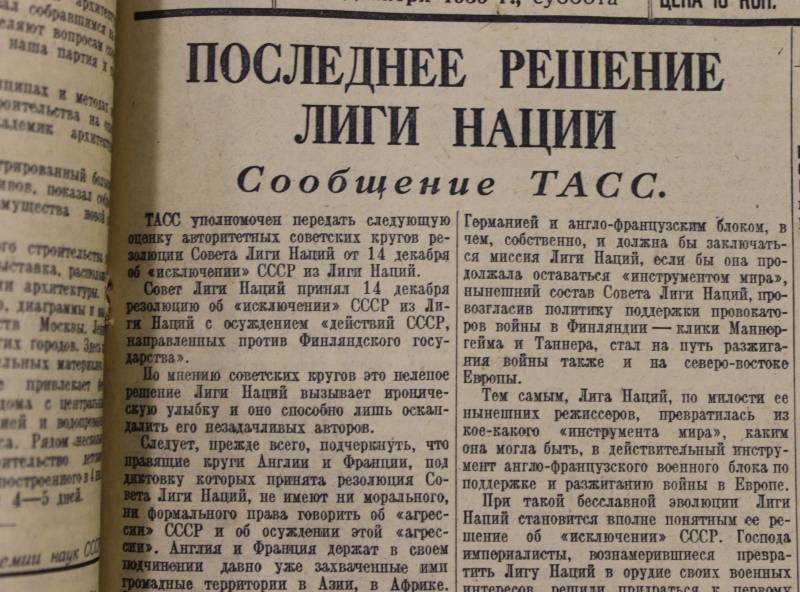 And then we will also demand not to leave the enemy a bundle of straw, not a liter of fuel, and even burn the house. A resident of them where to go in the frost in 30 degrees?

Then the messages from the front became very short ...
Well, now we will see the photos that were published in Pravda at the same time. All of them are very curious, although each in its own way. 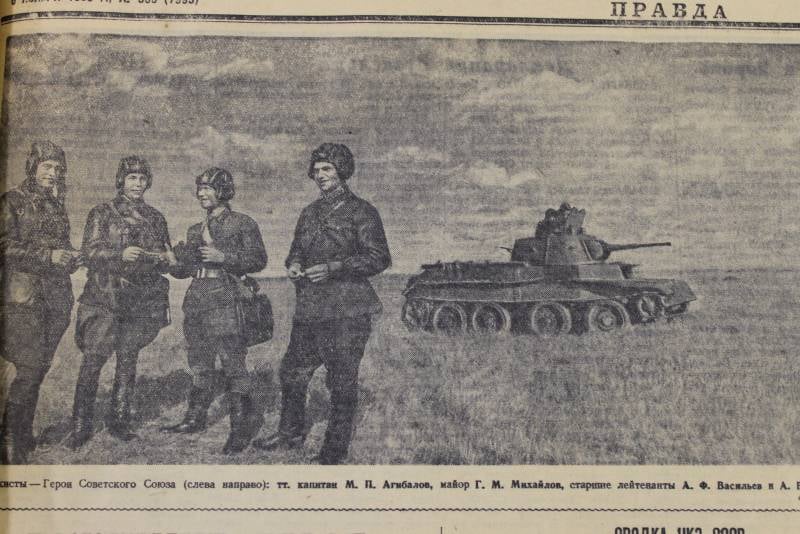 For example, this one. Just a wonderful propaganda photo. On which our BT-7 tank is perfectly visible. Here the specialist will look at such a photo and ... involuntarily he will become unwell. Especially if he thinks, what if the Russians have a lot of these tanks on a Christie-style chassis, with sloping armor and clearly powerful aviation engine? And what will happen if their Stalin moves this armada on us? 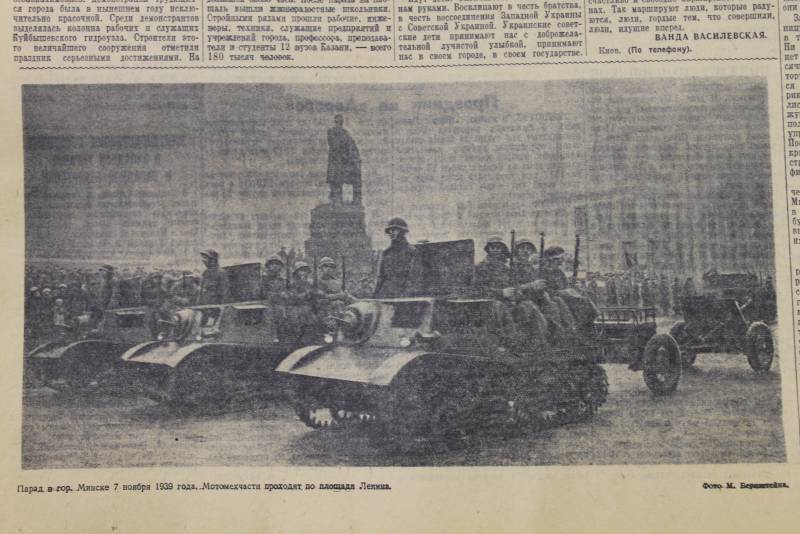 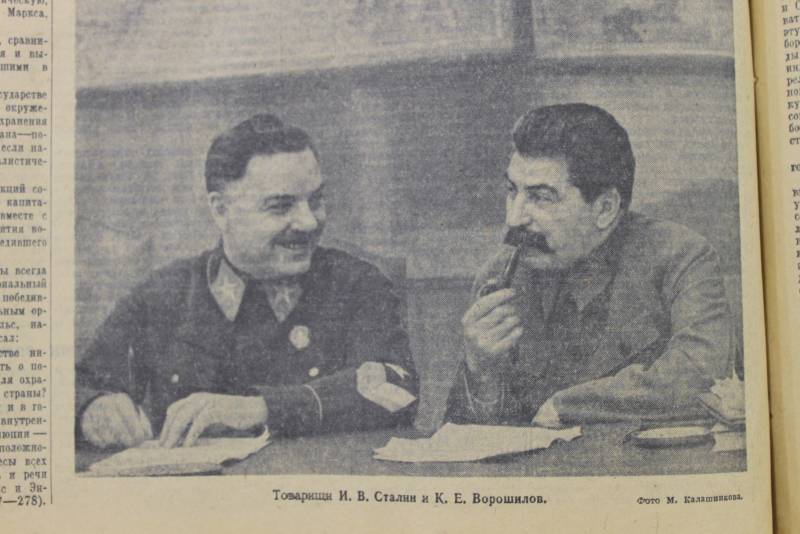 Stalin and Voroshilov. In 1940, they were often portrayed together 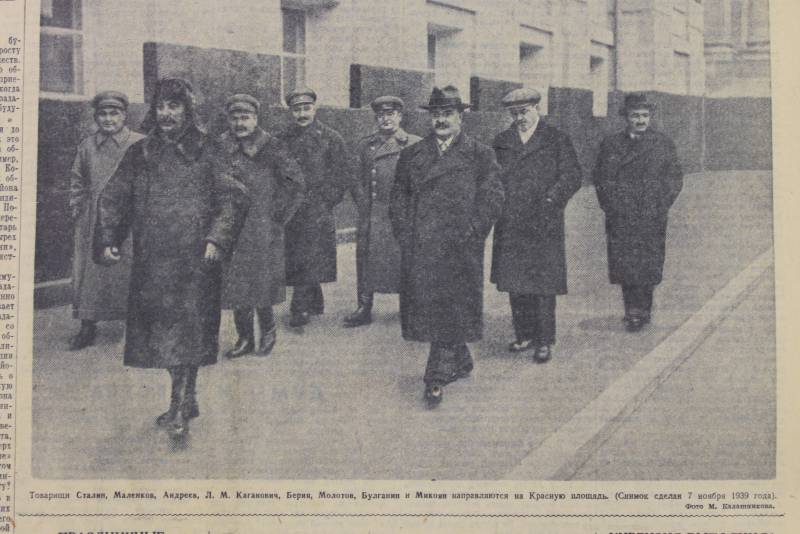 And here is a very funny photo. The members of the Politburo are in hats, but Comrade Stalin is dressed very warmly. What to do, it was very cold in Russia in November 1940 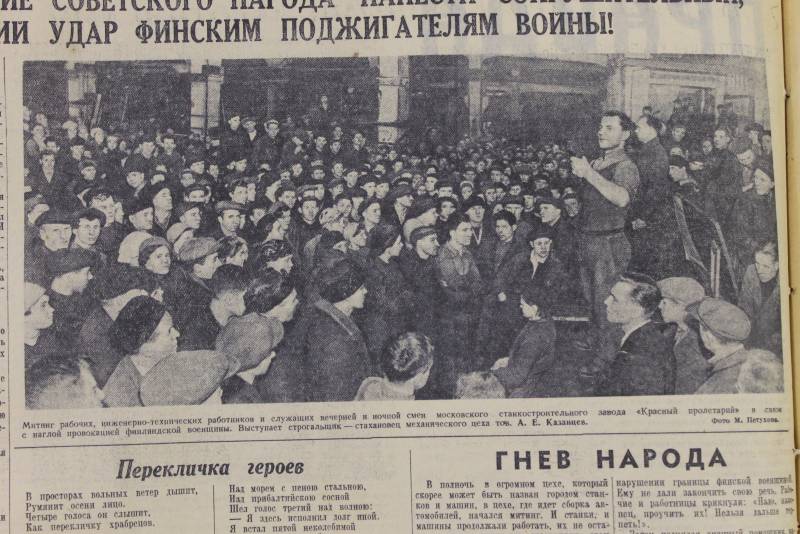 Photo from the rally of "popular anger" 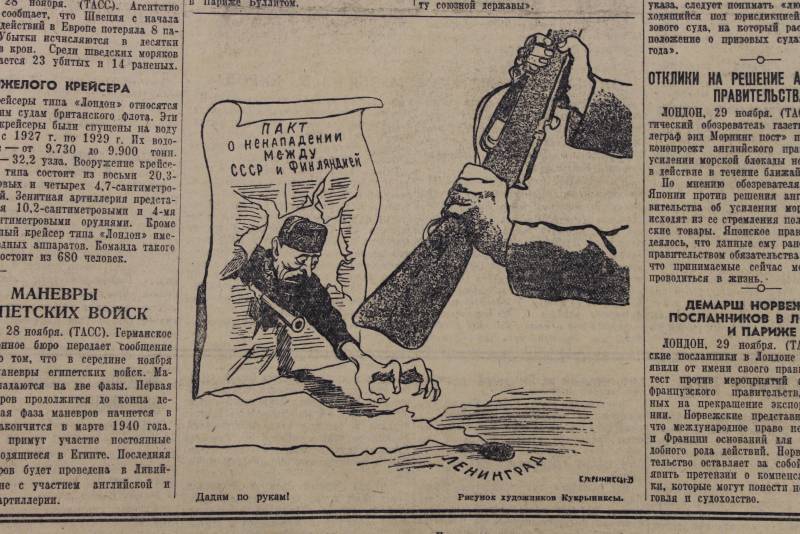 Caricature. Well, how can one do without it ... Previously, they painted on Hitler and Chamberlain, but after August 23 on Hitler it became impossible 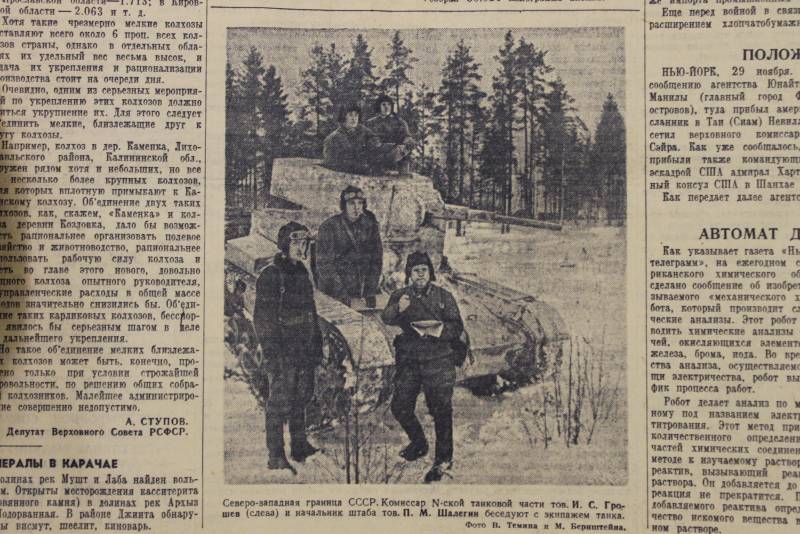 And this is the T-26 tank in winter camouflage. The most interesting, however, is that this picture was taken about 10 days before the conflict began. But there is already snow on the border. The question is, what about the song on Suomi Beauty? There it’s about autumn, and when it snows, it’s already winter. So it turns out that the war should have started even earlier, that they even managed to order and write a “patriotic song” for it, but politicians didn’t grow together and the time had to be moved. And moved ... but the changes to the song just forgot to make. “And so it will do!” And it did! To the time! 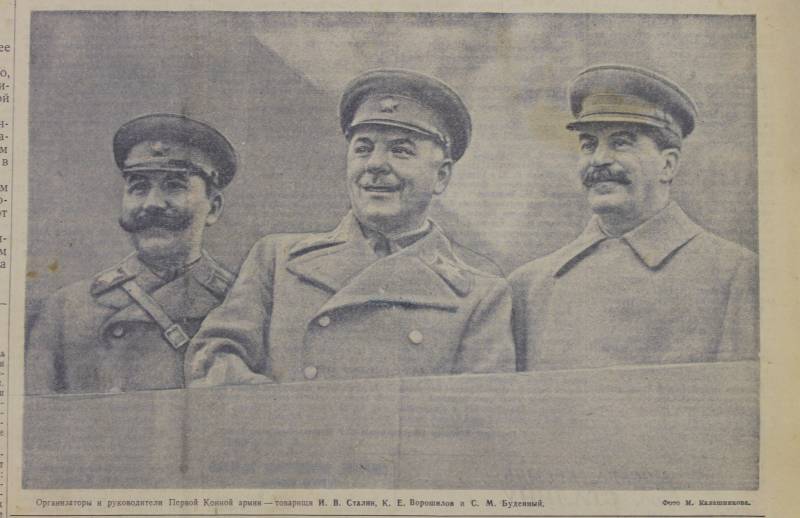 And then there are three leaders and all of them are not only in power, but also the heroes of the Civil War. And all the others are simply gone 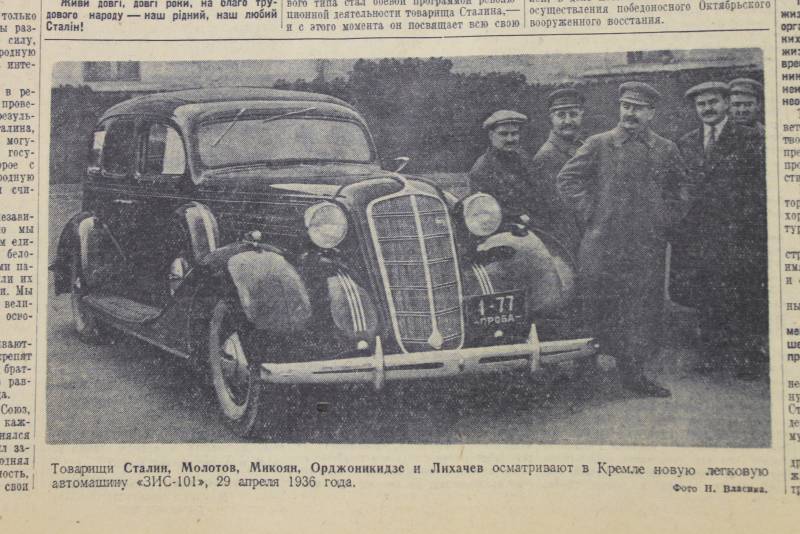 It is a tough job to stand at the helm of the state: look at the tanks, look at the planes, at the cars that are being prepared for production - and you also have to look at those!