Transsib: a strategic breakthrough in the transcontinental future

July 18 2012
30
One of the basic organizing elements of the Russian geopolitical space should rightly be considered the Trans-Siberian Railway. The Trans-Siberian Railway is the greatest transport project that connected the two oceans, which enabled Russia to connect the world production and economic centers with each other and obtain enormous opportunities for future development. 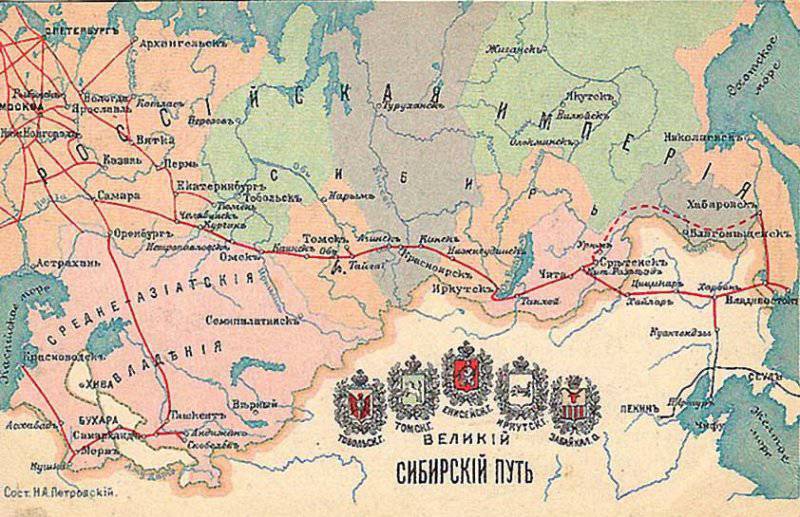 History Transsib began in 1892, when the Minister of Railways of the Russian Empire, Count Witte - truly the greatest Russian statesman - proposed a grandiose idea of ​​building a railway that would connect St. Petersburg with Vladivostok. Witte, who later became finance minister, literally fell ill with the ideas of the project for the construction of the Great Siberian Road - this was the name that the new highway initially received. Special merit in the implementation of the highway construction project belongs to Emperor Nicholas II, who personally by all means contributed to its completion. The Siberian Railway Committee, established by the Emperor, decreed: “The Siberian railway is a great national affair, which should be carried out by Russian people and from Russian materials.” Construction of the highway began simultaneously from two directions - from Chelyabinsk to the east and from Vladivostok to the north and further to the west. The construction of the road is a great feat of the Russian people, accomplished by the honest ascetic work of thousands of workers, engineers, builders, ordinary people. By the pace of construction of the highway (10 years), given its immense length and extreme difficulty of construction, the Great Siberian way did not know and does not know itself unparalleled in the world. Thanks largely to Transsib, the USSR conducted a powerful industrialization of 30's, largely due to Transsib, our country won the Great Patriotic War, and to a large extent thanks to Transsib, the new Russia did not collapse after the 1991 catastrophe of the year.

The Trans-Siberian Railway still occupies a central place in Russia's state policy of building and maintaining the functioning of the continental transport corridor, thereby defining its role in the world as the main logistics link connecting Europe and Asia. With the elimination of existing shortcomings and the further innovative development of the trunk line, Russia plans its qualitative modernization and expansion with a radical increase in the volume of transit traffic.

It is clear that the desire of our country to preserve and deepen the international monopoly on transcontinental transit is far from being satisfactory for everyone, and new players have already entered the battle for control over Eurasian transit. So, in the spring of this year it became known that The Kyrgyz government has included in the list of priority state projects the construction of the railwayconnecting China with Uzbekistan. The Chinese will build the road, but the project itself is supervised by the West. And although the fate of the project is still rather vague, its route and goals are quite clear. The main goal of the project is to reduce the transit dependence of the European Union on Russia and to create an alternative to the Trans-Siberian Railway.

It is assumed that the new railway connecting China with Uzbekistan will pass through the territory of Kyrgyzstan, then through Turkmenistan to the ports of the Caspian Sea, where the cars will be loaded onto ferries and delivered to Baku. In turn, Baku, Tbilisi and Turkish Kars will connect the already completed mountain railway connecting the western shore of the Caspian Sea with mainland Turkey. And to get to the Bosphorus from here is no longer a problem - the road in Turkey is already there. A railway tunnel under the Bosphorus leading to Europe is also built. Thus, carriers will be able to ship cargo from the Dutch port of Rotterdam to Shanghai via Turkey, Georgia, Azerbaijan, Turkmenistan, Uzbekistan and Kyrgyzstan.

What are the actions of Russia to preserve its role as a leading railway transit power? The Trans-Siberian Railway is the greatest road of all times, but it must be developed by attaching to it all new auxiliary highways, whose existence will make Russia even more attractive in the eyes of world carriers. Potentially, Russia is able to offer unprecedented speeds of cargo transportation across the continent. How can this be done?

Among the strategic transport projects currently being implemented in Russia, stands out the construction of a new railway called BELKOMUR (Arkhangelsk - Karpogory - Syktyvkar - Perm - Solikamsk) with a length of about 1160 km. The road project was developed before the 1917 coup d'état of the year, but its implementation dragged on for a century, and modern designers had to start it almost from scratch - a significant part of the Soviet project documentation on BELKOMUR mysteriously disappeared after the collapse of the USSR. Commissioning of the highway is scheduled for 2017-2018 years. 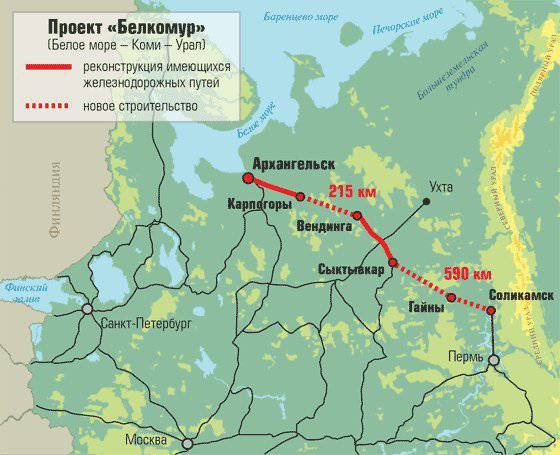 The new highway will reduce the distance of traffic between the Scandinavian-Baltic and East Asian regions by more than 25%! In addition, the construction of the road will give a powerful impetus to the development of the relevant regions of Russia, primarily the Komi Republic.

BELKOMUR can have its grandiose continuation, which is able to solve the problem of intercontinental transit once and for all (transit from Eurasia to North America) - this is the construction of the Transarctic highway running through the Russian Far North (for now it is a project from the field of futurology). But the continuation of the Transsib on the American coast of the Bering Strait across a bridge or tunnel is an idea about the implementation of which they are talking seriously and more often. The construction of such an object actually implements the idea of ​​creating a single global logistics space, in which the Heart of the World (Heartland) - Russia will take center stage.

In the spring of this year Head of Railways Vladimir Yakunin saidthat Russia and the United States may be connected by rail, and "not in the very distant future." Plans for the construction of a tunnel under the Bering Strait have existed for many decades. Experts from all over the world speak about the colossal economic effect that a project can have if it is successfully implemented.
President of the Russian Railways Vladimir Yakunin: “I am confident that the prospects for continuing the railway to Kamchatka and further through the tunnel for connecting with the North American roads are a project with feasibility in the not too distant future” (quoted by ITAR-TASS). However, there is nothing sensational in Yakunin’s spring statement, since the idea of ​​implementing the project to connect two continents by train through the Bering Strait was announced as early as 2007 in the “Strategy for the development of railway transport in the Russian Federation for the period up to 2030”. 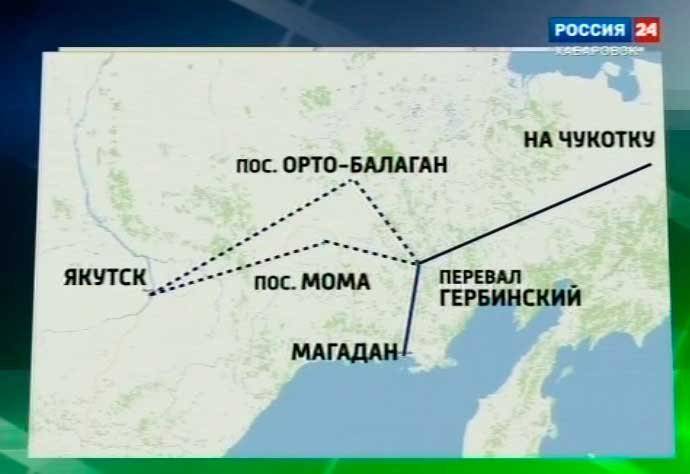 The construction of the Amur-Yakutsk railway - the northern branch of the Trans-Siberian Railway, capable of continuing up to the American coast, is being completed. It is planned to complete the last piece of the railway Berkakit - Tommot - Yakutsk by the year 2013. Until 2030, Russian Railways plans to continue the line from Nizhny Bestyakh to Magadan, and then to the Chukotka Autonomous Region and the Kamchatka Territory. And it will be possible to talk about the possible construction of a tunnel under the Bering Strait only after 2030.

The construction of railways in the Far North and the construction of a tunnel to America through the Bering Strait will undoubtedly be a tremendous breakthrough for our country and will remove most of the questions regarding the search for Transsib’s geopolitical competitors outside of Russia. The Arctic highway with a tunnel to America, duplicating the Trans-Siberian Railway or being its continuation, but somehow communicating with it, can become the main artery of the entire planet, connecting its richest regions with modern high-speed roads, which account for the lion's share of world production and economic power , - EU, APR, USA and Canada with the Eurasian Economic Space. Russia, with its unique geographical location and century-old traditions of the great railway construction, has every chance of success in this grand event. 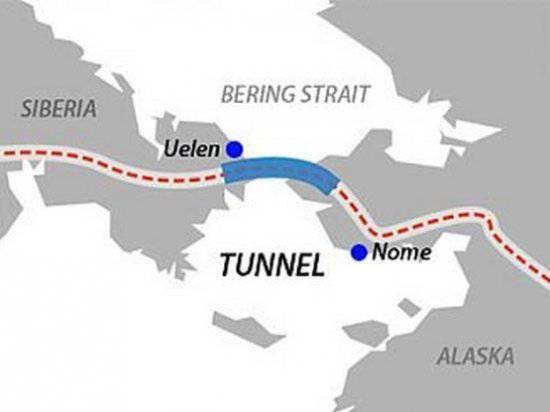