The number one region. Adygea without secrets and without deportations 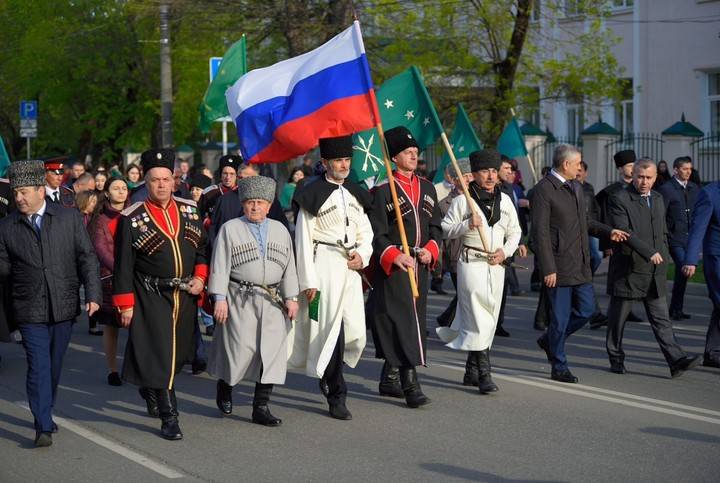 Autonomy is not in words

Adygea received the first number in the list of Russian regions not so long ago, when the lettering of the republics, territories and regions was changed to digital. However, the first “alphabetical” number seems to reflect to a large extent the primacy of autonomy in the degree of loyalty and political trustworthiness.

In a series of publications “Secrets of deportations” (“Secrets of deportations. Part 1. Ingush and Chechens ", “Secrets of deportations. Part 2. Karachaevtsy ") the authors of "Military Review" deliberately left Adygea out of brackets. Adygea is by no means accidental since the days of the USSR that it has been considered the pillar of the regime in the region. Nonsense? Not at all. First of all, because it was during the Soviet period that this people first received national-administrative autonomy. This is the fundamental difference from the long period of stay of Adygea in the Ottoman Empire, and then, from the beginning of the XIX century, and the Russian Empire. 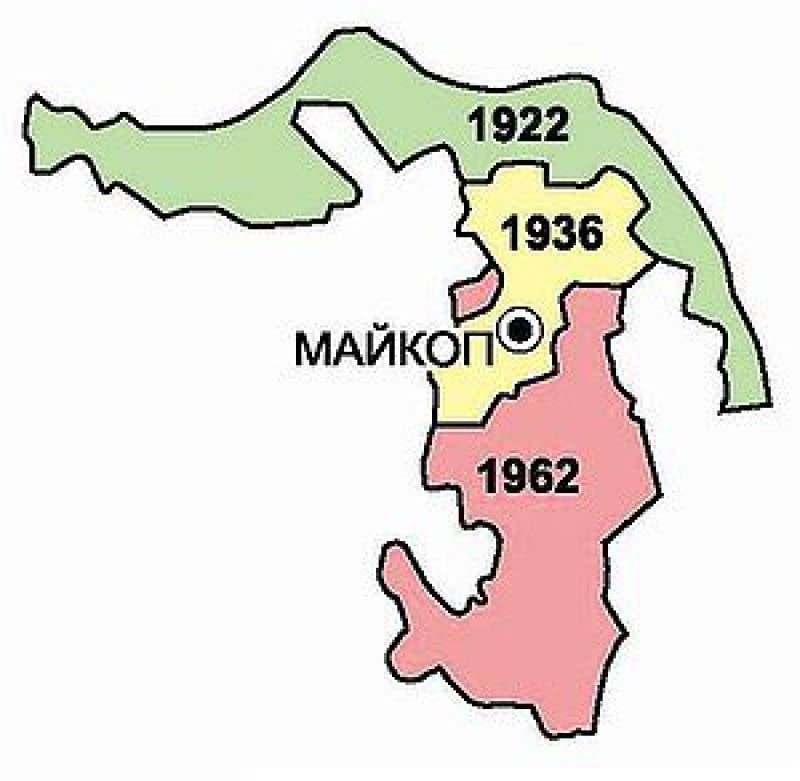 Moreover, as part of the USSR, Adyghe autonomy has repeatedly expanded its territory, which in the conditions of the North Caucasus has a very special significance. Soviet Circassians got the opportunity to preserve and increase their history, culture, your own language, which have become compulsory disciplines in the field of education in the region.

That is why it is not surprising that on the fronts, as in the partisan detachments of the Great Patriotic War, immigrants from Adygea and local residents showed unparalleled heroism. In those years, not only the mountains of South Adygea, but also its warriors and partisans themselves became an immortal barrier for the Nazis. They tried in vain to break through Adygea to the Black Sea coast of the North Caucasus and Northern Abkhazia.

Who remembered the deportation?

Deportation in the history of Adygea was, but not during the Soviet era, but back in the 19th century, immediately after the end of the more than 40-year Caucasian war. In it, as you know, the Circassians were by no means the last among the fighters for freedom from the "White Tsar". It is for this that they paid the deportation to Turkey of at least 40 thousand compatriots. 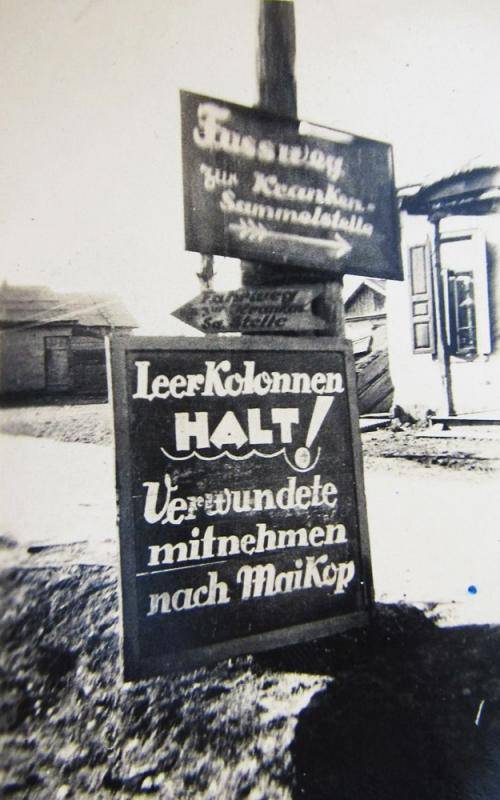 Based on the historical memory of the Circassians, already in the years of World War II in Berlin and Ankara they believed that the war with Russia and expulsion to Turkey left a significant mark in the political consciousness of the people. Moreover, by the beginning of the Soviet period in Adygea itself there were no more than a quarter of the Circassians scattered around the world.

However, thanks to carefully calibrated Soviet policies specifically in Adygea, the calculations that its residents would constitute the vanguard of the Islamic-nationalist SS battalion or Wehrmacht failed. But even the option of including units from the Circassians into the Turkish troops, preparing for the invasion of the Caucasus in 1941-1943, was considered.

Everything happened exactly the opposite: it was the Circassians on the eve of the Wehrmacht invasion in the summer of 1942 that almost destroyed the oil and gas fields in the territory of Adygea. At the same time, they even managed to evacuate part of the mining equipment to the Turkmen port Krasnovodsk, where from 1942 to 1946. Tuapse refinery worked. 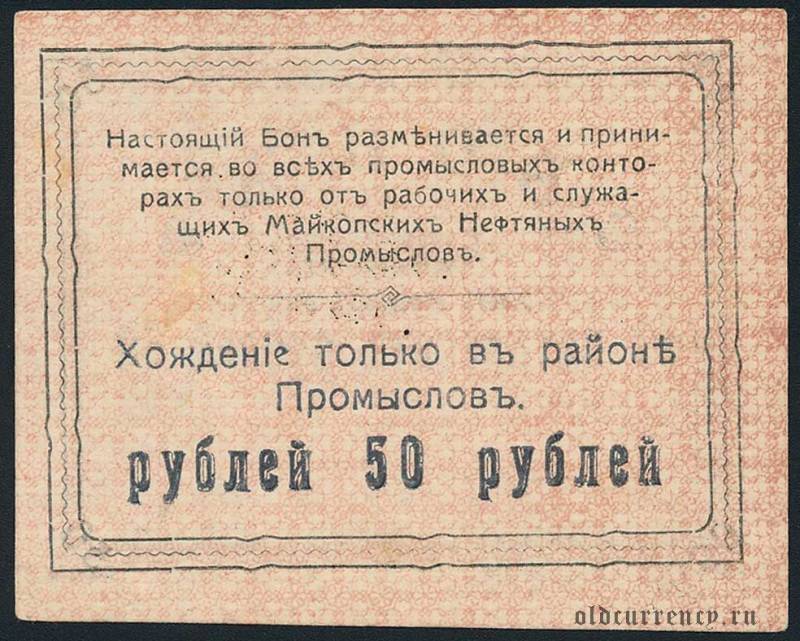 Incidentally, a number of oil and gas production facilities in Adygea have not been restored so far. But among them there are very numerous wells and deposits of “white” oil - an almost complete analogue of high-quality gasoline. Such deposits are also found in nearby Khadyzhensk, Apsheronsk and Neftegorsk. Incidentally, this led to the fact that in Adygea it was not required, and to this day it is not required to create large oil refining facilities.

Hitler broadcast in April 1942: "If I do not receive Maykop, Grozny or Baku oil, I will be forced to end this war." But it did not happen: only the Romanian oil and synthetic fuel from coal of Silesia and the Ruhr "saved" the Nazis.

But Nazi and pan-Turkist strategists did not take into account that after 1917, Moscow’s policy regarding the Circassians, initiated by People’s Commissar Joseph Stalin and Bolshevik curator of the Caucasus Sergo Ordzhonikidze, changed dramatically. Given the political geography of Adygea, the country's leadership, we repeat, decided to pursue a course towards the most favorable conditions for the Circassians.

Say, the Circassian ethnic groups that were on the Black Sea coast were not only not resettled or deported: they were allowed to settle in Adygea itself. Until 1938, Adyghe schools remained in those areas of the coast, newspapers appeared in the national language. And collectivization both there and in Adygea itself took place more formally than actually.

Perhaps that is why the Circassians did not help the invaders to find the shortest mountain routes to Sochi, Tuapse and Adler. Again, everything turned out the other way around: the overwhelming majority of the local population helped the partisans, the special forces of the NKVD or independently created partisan groups. Pan-Turkist propaganda provoked a backlash in Adygea: Turkish emissaries also worked in Adygea at that time, but most of them were identified by local residents.

It is worth recalling that out of the relatively small number of Adygea residents (about 160 thousand in 1941), during the Great Patriotic War 52, the soldiers of this autonomy became Heroes of the Soviet Union, and for military and labor exploits of 15 thousands of Circassians were awarded orders and medals.

Now we can only regret that a popular guide to the resort capital of the Caucasus (Sochi: a city guide, Krasnodar, 1962,), published in thousands of copies, does not say a word about the role of Adygea and Circassians in the successful defense of Sochi, Tuapse, and the entire Black Sea coast of the RSFSR. There is no story about strengthening the defense capability of the north-western borders of neighboring Georgia, about the active actions of partisans in the Russian Black Sea ...

Shortly after the war, on December 5 of 1949, the bureau of the collegium of the USSR State Planning Commission approved the project submitted by the RSFSR Council of Ministers for the construction of a new Transcaucasian steel highway Adygea (Khadzhokh) - Krasnaya Polyana - Sochi almost 70 km long.

The relevant decision noted:
“Due to the growing congestion of the routes of the North Caucasus and Transcaucasia railways along the Black Sea coast, blockages can soon occur both on these routes and on the approaches to them from the adjacent railways. In addition, only two, besides distant friend, operate between the North Caucasus and Transcaucasia. from each other there are steel lines along the coast of the Black and Caspian Seas, which no longer meets the growing demands for transportation between these regions. "

This decision confirmed first of all that the Soviet governing structures favored the Adyghe autonomy, which was then included in the Krasnodar Territory of the RSFSR. True, the construction of that road, begun in 1951, was interrupted in March of 1953, as if it were supposedly "premature and costly." Then, construction was resumed in 1972 and 1981 (in the direction of Adler adjacent to Georgia), but both times were canceled almost two to three weeks after the start of work. Which is not least connected with the position of the Georgian authorities.

The leadership of the Georgian SSR, very “influential” in Moscow, has been lobbying for the projects of the new Transcaucasian railway since the beginning of the 70. to Georgia through Chechen-Ingushetia and along the Georgian Military Highway (i.e. via North Ossetia). In 1982, the second option was chosen, construction began in 1984. But soon Tbilisi was worried about the "excessive penetration" of the RSFSR in Georgia, and a year later the construction was stopped.

It remains to recall the borders of Adygea, which, unlike a number of other regions of the North Caucasus, did not become a problem. So, with the formation of the USSR, Adygea for a start (1922-1928 gg.) Was combined with the sister Circassia - within the borders of the Russian-Adyghe war. Then they decided that such a "scale" of the autonomous region would be an unsafe reminder of the former borders of this ethnic region. 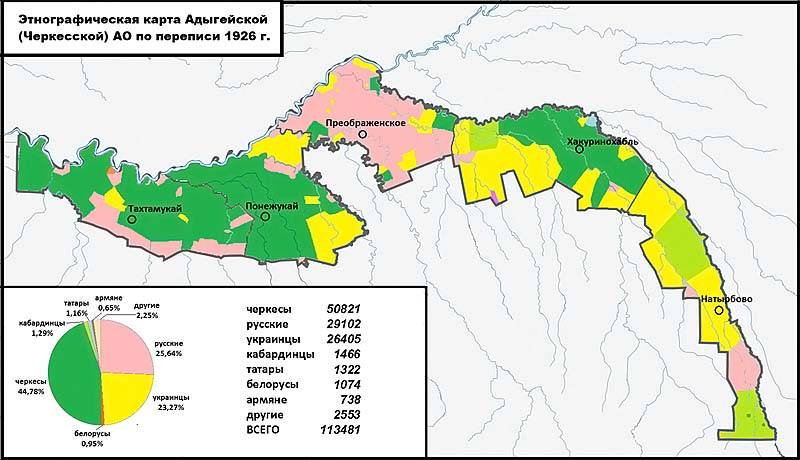 Therefore, in 1928, it was decided to separate Adygea from Karachay-Cherkessia by the territory of the Krasnodar Territory (the Shedok-Psebay-Krasnaya Polyana region). And at the end of the 30-s this Autonomous Oblast, with its capital in the city of Koshekhabl (the central region of Adygea), was included in the Krasnodar Territory. The territory of the region then amounted to no more than 5,1 thousand square meters. km

Already in the second half of the 1930-s, along with the increasingly active development of the local economy and social sphere (the state, for example, from the end of the 1920-s there subsidized even citrus and tea growing, experiments with cotton growing and cultivation of olive trees), on the initiative of Stalin, territorial increments of the Adygea Autonomous Okrug.

First of all, she received the large neighboring city of the Krasnodar Territory Maykop, which has become the capital of Adygea since April 1936. And in February of the 1941, the Kamennomostsky mountain border region with Abkhazia became the Adyghe region of the same region, centered in the city of the same name. The stone bridge was soon renamed the Adyghe style - Hadzhokh. By the way, in this area before the war, large reserves of high-quality gold ore, silver, chromium, and vanadium were explored. But they are not developed to this day. 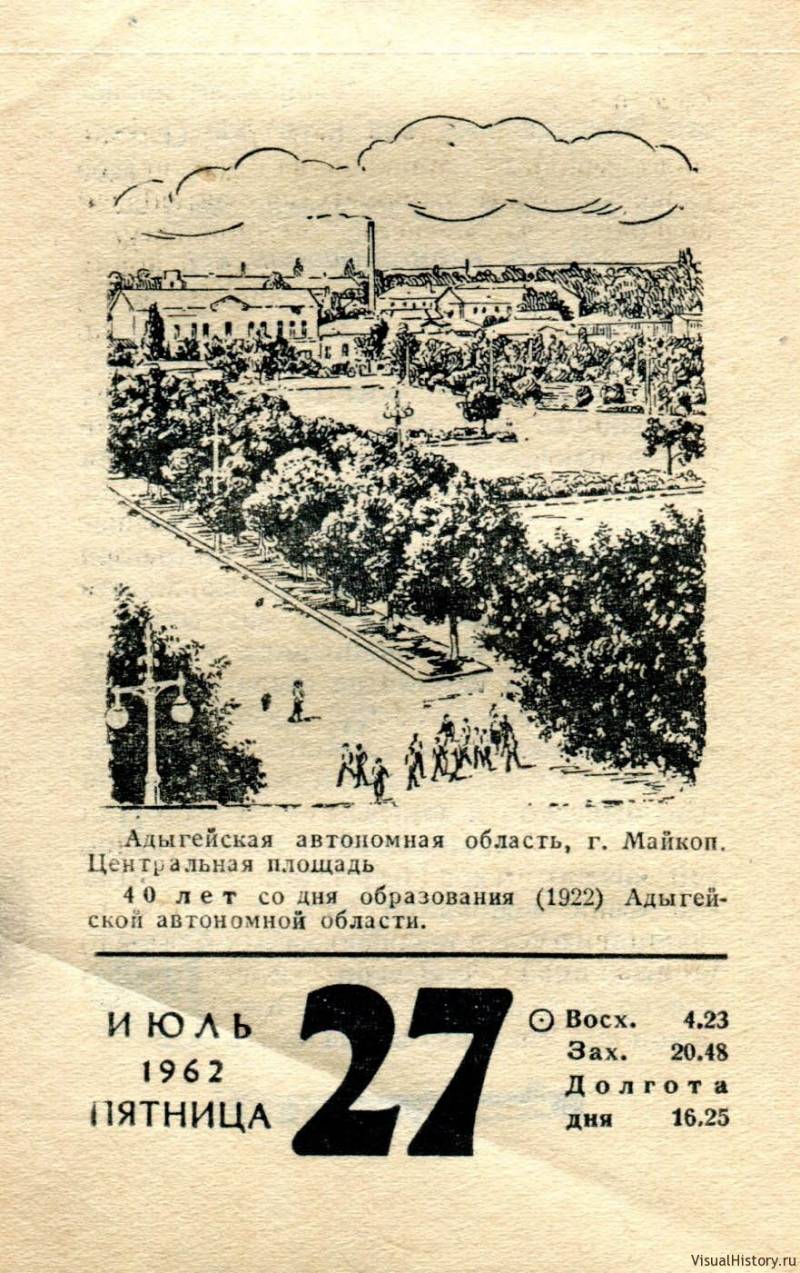 Finally, at the end of April 1962, the whole Tula region of the Krasnodar Territory with the eponymous center (southeast of Maykop) was included in Adygea. However, the Russian population, prevailing in the areas transferred to Adygea, was not evicted from there to maintain the ethno-political balance in this Autonomous Region. That is why today the share of Russians and Russian-speaking people in the total number of Adygea residents is about 60%, Adygs and related ethnic groups - over a third.

As a result, the territory of the Adygea Autonomous Okrug increased almost to 8 thousand square meters. km That it remains today. In addition, at the end of the 1960, the republic got direct access to one of the largest reservoirs in the south of the RSFSR, Krasnodar, located on the Kuban coast of the Enemy (western) region of Adygea. And by 1963, one of the so-called trans-North Caucasian steel highways (TSCM) began to pass through the same Enem.

Is it any wonder that the rate of economic growth of this region and the increase in the cultural and educational level of the population here were among the highest in the North Caucasus right up to the beginning of the 1970's? It is clear that similar measures described above were aimed primarily at making the Circassians from the once "selfless" opponents of Russia become its strong allies.