"Duncan MacLeod Among Automata": a test for the "survivability" of the AK-103 caliber 7,62 mm 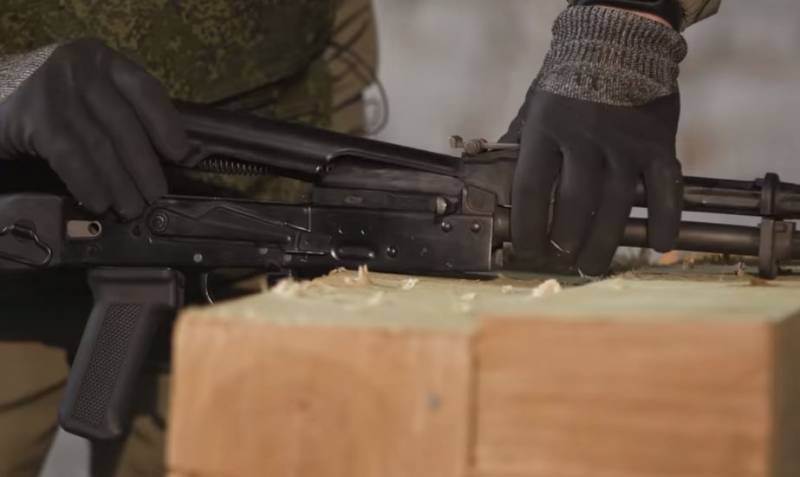 Experiments on the "survivability" of domestic rifle weapons going on. A favorite weapon for experimenters in this regard is the Kalashnikov assault rifle. The “survival” experiments with dozens of practically non-stop bursts of 30 cartridges concerned various versions of AK. Now in the program "Destroyers of weapons" tests are shown AK-103 caliber 7,62 mm


The specialist of the Kalashnikov Concern, Georgy Gubich, armed himself with the AK-103, dozens of stores with ammunition for it, as well as a fire extinguisher and started firing, the stop in which was carried out only when the machine was reloaded.

As a target, birch blocks with a thickness of 150 mm were selected.

On the 360-m shot, the machine becomes difficult to reload, and the experimenter uses the “on the floor” option.

After the 540 shot, the weapon barrel acquires a bright scarlet color. The machine starts to smoke.

On the 690 cartridge, fire intensifies.

After the 720 shot, firing is already without a forearm with the machine burning open.

Experimenter about the machine:

This is Duncan MacLeod
What happened with the machine gun after the 1000th shot can be found in the video:

We are in Yandex Zen
Master Victory
The history of the assault rifle MP-43
10 comments
Information
Dear reader, to leave comments on the publication, you must to register.