Atalychestvo: an instrument of politics or a custom of education? 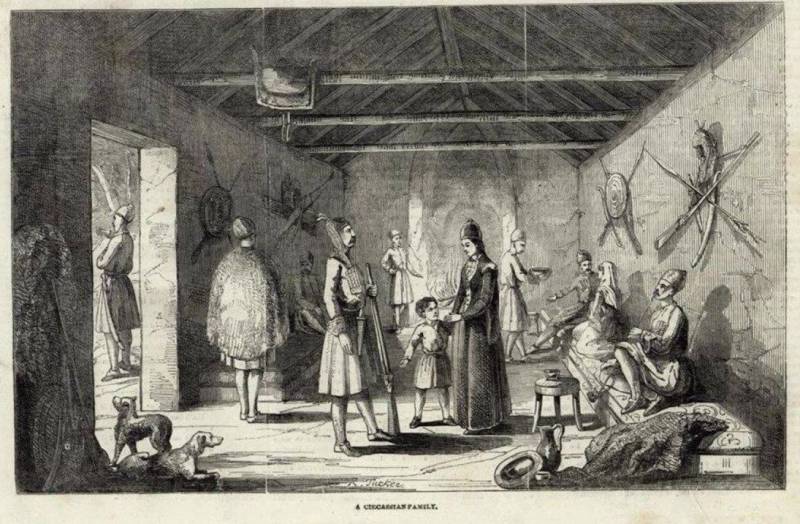 It is generally accepted that atalyticism is the custom of the Caucasus, according to which a child, after his birth, goes to his “adoptive” father to be raised. Hence the name of this tradition, because “ata” means father, and “atalyk” means fatherhood. After reaching a certain age, the young man could return to his native family. The custom was common among the Circassians, Kabardians, Balkars, Kumyks, Abkhazians, Ossetians, Mingrelians, Svans and other Caucasian peoples. They were not alien to atalism in the Crimean Khanate and in the Ottoman Empire. In addition, Grigory Filippovich Chursin, a Russian, and later Soviet Caucasian ethnographer, argued that atalism was common even among the Hindu Kush mountain peoples in Central Asia.

In practice, atalism was implemented as follows. When the parents decided to give their child atalyk, the age of the child did not matter much. They gave children to foreign families sometimes after three to four months of age. At the same time, the child who adopted the child acquired all the rights of consanguinity with the family of his pet. Such a relationship was called milk, but had all the power of blood relationship.

Both boys and girls were given to atalychestvo. Naturally, the length of stay with the new “father” for girls and boys was different. The length of stay in the atalyk house was determined for a boy 6-13 for years (sometimes up to 18 years), for a girl from 12 to 13 years. Atalyk was obliged to teach the young man perfectly everything that he knew, including military art. The boys studied horse riding and the rules of mountain etiquette, shooting and agriculture. Of course, a lot of time was spent on physical fitness. The girl fell into the hands of the wife of Atalyk. She taught her needlework, housekeeping, cooking, weaving, etc. Also, one of the main functions of atalism was the early and more complete socialization of children, especially from noble families.

Sometimes the pupils fell to the atalyk not just from a different kind, but also from a different ethnic group. This happened most often among princes and aristocrats. In such circumstances, a boy or girl, among other things, learned a new language for them, which was expensive in Caucasian multilingualism. 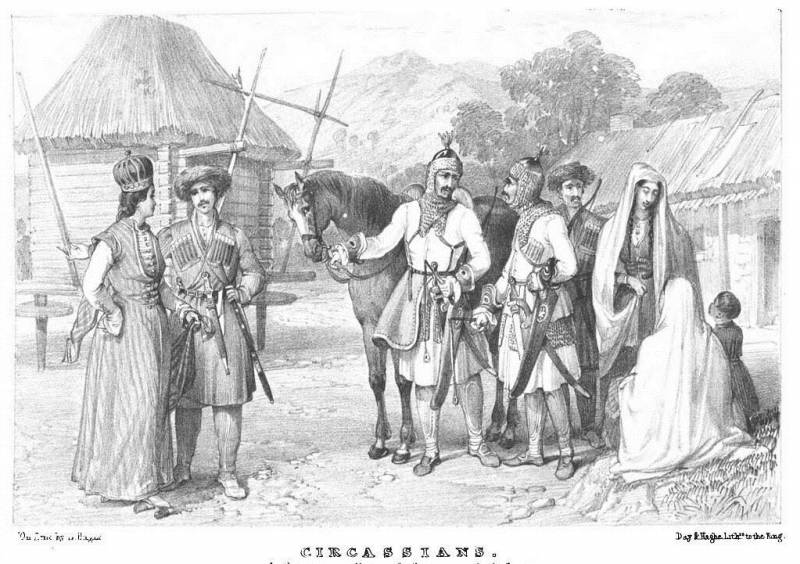 At the end of the period of education, the atalyk traditionally bestowed his “son” or “daughter” in every possible way. Moreover, gifts were sometimes much more luxurious than the family presented to their own children. Of course, a simple peasant could not give much to the pupil, but more affluent families could present the pupil with a horse, weapons and a noble dress. With the same honors, the girl completed the training. In response, the inmate’s family arranged a large feast, and the atalyk family was presented with gifts similar to those received by the inmate, and sometimes much more. If the offspring grew up healthy and competent, then the atalyk could be transferred to the possession of a whole land allotment, not counting cattle.

Extraordinarily vividly, according to his genius, atalism was described by Alexander Pushkin in the unfinished poem "Tazit":

“Because of the mountain appeared suddenly
The old man is gray-haired and the lad is slim.
They give way to an alien -
And the mournful old father
So he said, important and calm:
“Thirteen years have passed,
How did you come to a stranger’s village
He handed me a weak baby
To raise from it
I made a brave Chechen.
Today is the son of one
You prematurely bury.
Ghazub, be submissive to fate.
I brought you another.
Here he is. You bow your head
To his mighty shoulder.
Replace your loss with them -
You will appreciate my works,
I don’t want to boast about them. ”

Of course, the most generalized form of atalism is given above. Depending on this or that people and social layer, many significant nuances arose.

The “grassroots” atalism that existed among the peasants based their knowledge exchange and strengthening ties between clans until the merger into one family. And sometimes the basis of atalism was only the safety of children. For example, a family oppressed by a local prince, an aristocrat, or in a bridle to give children a future, and help the family, sent boys and girls to be educated to their friendly atalik. As a rule, at the “grassroots” level, a more prosperous person, often living far from the place of birth of the pupil, acted as an atalyk. 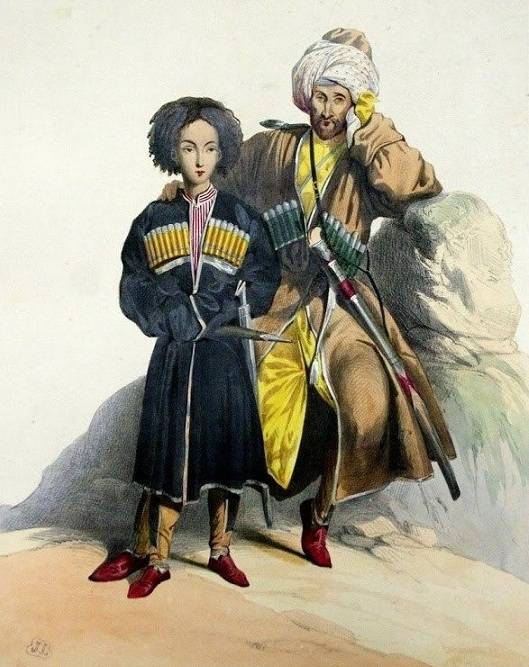 Of course, things were completely different with the princes and nobles. For them, the tradition of atalism included the issues of education and training of military personnel, foreign and domestic policy, fidelity to those close to them, and the creation of future governors and advisers. Also, do not forget that people with power are also endowed with a burden of problems and responsibility for thousands and thousands of lives. History repeatedly proved that a strong leader is often too busy building a powerful state, rather than raising offspring, on which the "great" nature usually rested.

Princes traditionally gave their children to be raised in families by the estate below them. Thus, the ruling circles tied faithful people to themselves with almost blood ties. So, Kumyk khans and shamkhals gave their children upbringing to the primary Uzhden, i.e., close aristocrats. Circassian princes as atalyks chose their Warks, i.e., the same nobles. In turn, the nobles passed their children to the estate of wealthy free peasants.

Often the basis of atalism was politics. Given the fragmentation of ethnic groups, sub-ethnic groups, and Caucasian societies, rulers of principalities or owners of individual valleys, in order to enter into a more solid alliance with some neighbors (traditionally against other neighbors), gave their children and also adopted foreign sons and daughters. For example, pro-Turkish Circassian princes gladly became ataliks for children of Crimean khans. The princes gained a powerful ally, and the khans thus intended to write the princes in their vassals. After the fall of the Crimean Khanate, many representatives of its nobility found shelter among the former Atalyks.

It is also worth noting separately that, as the requisitions from ordinary peasants throughout the Caucasus increased due to the ongoing war, the atalism began to acquire a purely class character. Ordinary people more and more lost the benefits of giving the child atalyk. At the same time, the aristocracy thus desperately stitched together the torn alliances between entire principalities, societies and khanates.

Of course, the national factor had a strong influence on tradition. The peoples scattered throughout the Caucasus with its extremely colorful and mottled relief introduced their amendments into the custom.

One of the bright and original explorers of the Caucasus, mentioning atalychestvo, was Sultan Khan-Girey. He was familiar with Circassian atalychism firsthand. After all, Khan-Giray was simultaneously a descendant of Crimean khans and Circassian aristocrats, as well as a colonel of the Russian army. Here is what this historian and ethnographer wrote about atalychestvo:
“Princes have long been looking for all kinds of means to increase their strength in order to bind the nobility to themselves, and these for the everlasting protection and assistance to themselves in all cases wished to become closer to the princes. For such a mutual rapprochement, they found the best way to raise children, which, linking the two families by kinship, brought mutual benefits. "

Fyodor Fedorovich Tornau, a lieutenant general, writer, and one of the first scouts who made their way to the territory of Cherkessia and Kabarda, also wrote about this custom. Tornau pointed out the peculiarities of atalism among the Abkhazians:

“Poor nobles, peasants and slaves in Abkhazia have found a good way to protect themselves from oppression by the strong custom that exists among princes and wealthy nobles, to raise their children away from their parents' homes. Taking this responsibility, they are kind of related to the parents of their children and enjoy their protection. ”

The little-known ethnographer Valdemar Borisovich Pfaf, a Caucasian scholar and teacher who left weighty, but not fully appreciated works on the study of Ossetia, also pointed out some features of atalism among Ossetians:

“Having received a name, the child is given to an outsider to bring up the house and does not see his mother until the age of 6 ... Therefore, the Ossetian child loves his nanny more than his mother, and he is afraid of his father, but not at all, the educator (atalyk) is much closer to his heart. The teacher at the end of the 6-year term returns the child to his parents' house. On this day, a holiday is celebrated in the family, and the teacher and the nanny receive a gift of several hundred rubles from their foster father. For this reason, at present, this ancient custom is preserved only in the rich and sufficient sections of the population. The upbringing of a child in the house of Atalyk in many respects resembles that of the Lacedaemonians: it is directed exclusively to the physical side ... ” 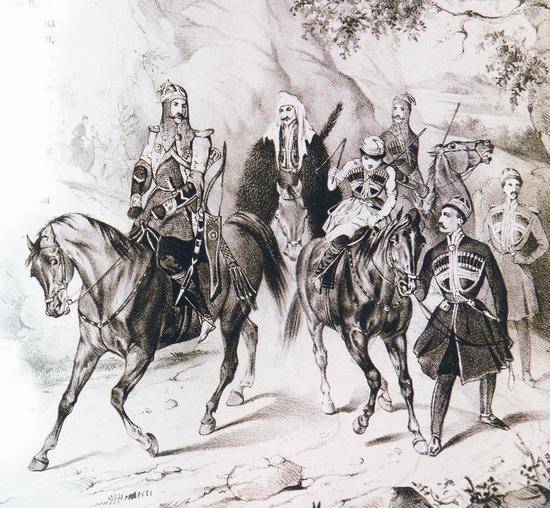 In the accident, atalism began, so to speak, with swaddling clothes. For example, the Khunzakh khans preferred to give their children to feed the wives of free and wealthy peasants or nobles. Later, the child was usually brought up in the family in which his dairy brothers grew up.

The effectiveness of atalism as a political tool

It is generally accepted that atalism was an effective tool for unifying the Caucasus, resolving military conflicts and enriching knowledge and languages, of which there are many in the Caucasus. But alas, history itself showed that atalyticism could not be opposed by the fragmentation of the peoples of the region, long-standing mutual reproaches and the monstrous expansion force of both states and religious and political movements.

Muridam, full of religious fanaticism, the tradition of atalism was alien, like almost all other customs. For example, Gamzat-bek, the imam and predecessor of Shamil, was brought up for a long time in the Khunzakh khan house of the Avar khans and was considered almost the milk brother of the young khans of the accident. But this did not stop him from cutting out all the Khunzakh rulers to the root.

As a form of upbringing, training, and socialization, atalyticism, of course, played a significant role. However, this tradition could not resist cruel political processes in principle. During the struggle for the throne of the Principality of Abkhazia, Sefer-bei and Aslan-bei met in a fight not for life, but for death, and they each other were not even dairy, but siblings.