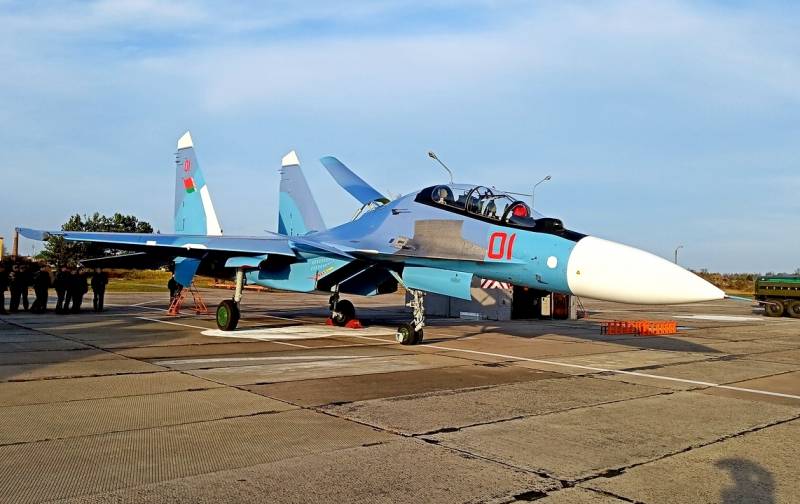 Republic at the Crossroads

The situation around the Air Force and Air Defense Forces of the Republic of Belarus as a whole is extremely similar to that which we see in the example of other post-Soviet countries, in particular Ukraine. Among the patriots and nationalists (at least Ukrainian), the thesis that "Russia has taken the best for itself" is popular. But he only demonstrates a complete misunderstanding of the essence of the issue. After the collapse of the USSR, the same Ukraine inherited 19 strategic Tu-160 bombers from 35 constructed vehicles, which included eight prototypes.

Even if the economy "bloomed", it is obvious that the country would simply not be able to keep them in combat-ready form. In turn, Belarus inherited from the USSR a large park of Su-27: expensive and redundant for a small state. Now Belarus no longer exploits them. But there are several dozen MiG-29, which form the basis of the Belarusian Air Force. At the moment, they are being upgraded to the MiG-29BM level: such an aircraft (at least on paper) can use the old Soviet-controlled weapon air-to-surface class, in particular, X-29 and X-25 missiles. In general, it turned out something between the fourth generation and the fourth generation with a plus (we apologize for such a pun). But the main minus of the MiGs in their current form is the resource. Soviet cars were never famous for this at all. Now the old fighters need to be changed for something. 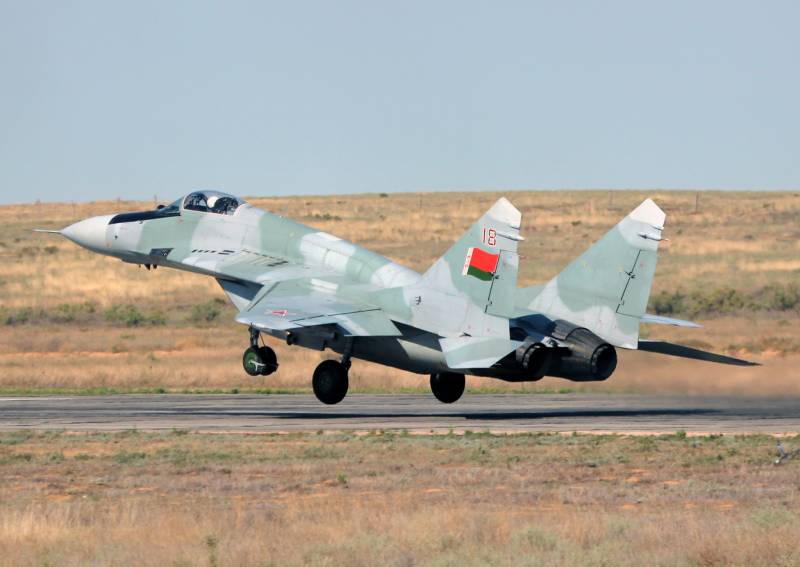 
On August 18 of the current year, the bmpd Center for Strategy and Technology Analysis blog showed the first Su-30СМ fighters for the Republic of Belarus. “At the events of 17 on August 2019 of the year in Irkutsk on the occasion of the 85 anniversary of the Irkutsk Aviation Plant (IAP, a branch of PJSC Irkut Corporation), the first two Su-30СM fighters built for the Belarusian Air Force and Air Defense were spotted on the territory of the enterprise,” wrote a blog.In the photo you could see the Su-30СМ with the tail number “01 red” (presumably serial number 10МК5 1607), as well as the aircraft with the serial number 10МК5 1608. the other hand after ser Dyukov’s gray-blue fighter jets, even such a quasi-Soviet style looks good. A kind of retro.

On November 13 of the current year, Interfax announced that the first batch of Russian Su-30СМ fighters arrived in the Republic of Belarus. “The first pair of Su-30СМ combat fighters from the planned twelve arrived in Belarus,” the military department of the Republic of Belarus said then. Recall that in the summer of 2017, Russia and Belarus agreed on the supply of four new “Dryers”: in all, Belarus should receive twelve such machines. Deliveries are planned to be completed in three years.

Perhaps it’s worth mentioning what new cars provide. Formally, the Su-30СМ is one of the newest Russian fighters, it made its first flight in the 2012 year. In practice, we are talking about a Russified version of the Russian-Indian (primarily, of course, Russian) Su-30MKI, which first took off in the 1997 year. For its time, the car was more than successful, which confirms the almost incredible by modern standards the number of cars delivered to India: now the country operates about 250 of such aircraft. For comparison, for all the time Sukhoi delivered only 24 Su-35С aircraft to foreign customers: China bought them for the AL-41Ф1С engine. And the fifth generation Su-57 has not yet been ordered at all by any other country in the world.

Recall also that at the end of the 90's, no one had a fifth generation, just as the Eurofighter Typhoon and Dassault Rafale of the 4 ++ generation were not in service. Therefore, a car with a good combat radius, high maneuverability and the N011 Bars radar with a passive phased antenna array looked really good.

But, it is worth repeating, it was then. Today Su-30СМ / MKI can hardly be called modern, which demonstrates the limited interest in it from the strong and wealthy countries of the world. The plane did not get into the famous Indian tender MMRCA at all, although there were no fifth-generation fighters and the rivals of Russia were the familiar Typhoon, Rafal, Gripen, as well as the American F-16 and F-18.

In the case of Belarus, the main alternative to Sukhoi was almost always seen the new MiG-29. Especially when you consider that its development in the person of the MiG-35 has advanced on-board electronics by Russian standards, in particular - radar with an active phased antenna array. What Su-30СМ (at least for now) does not have. However, 35 has its shortcomings and this, probably, in Belarus they also understand very well.

However, even with this in mind, far from Belarusians were ready to accept the Su-30 as the main fighter. Perhaps, Belarus’s independent socio-political newspaper “Free news. SNplus ”in a recent article“ Su-30 SM: counting money and asking questions. ” The author did not focus on the obsolescence of the machine, but on the fact that such an aircraft is excessively expensive to operate. At the same time, he draws a parallel not even with the Soviet MiGs, but with Western cars.

“The fact is that Soviet / Russian aviation Engines are traditionally inferior to Western ones not only in fuel efficiency, but also in turnaround and designated resources. The Polish Air Force simultaneously operates the Soviet twin-engine fighter MiG-29 and the American single-engine F-16. It is assumed that the American fighter flies off all 35 years with the same engine that was originally installed on it. Unfortunately, this does not work out with the MiG-29: eight engines will have to be replaced in the same period, ”writes Snplus. 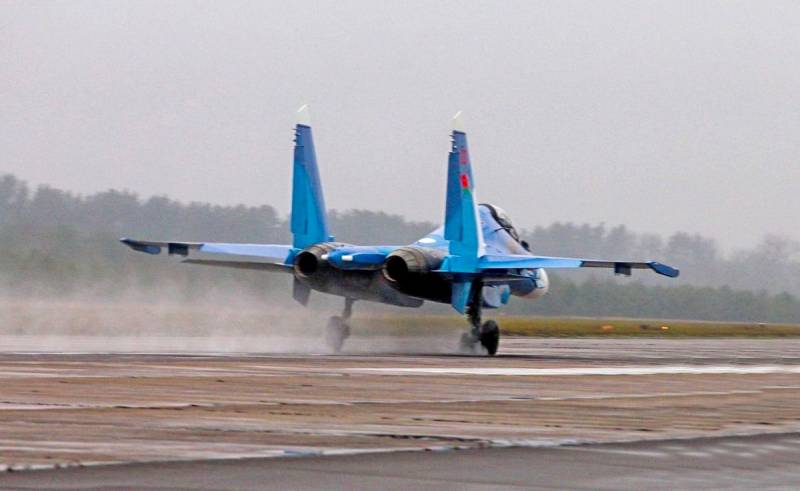 Speaking specifically about the Su-30СМ fighter, according to the author, Andrei Porotnikov, one such machine will “eat” six AL-31FP engines in its life cycle. The high price of the machine itself should be added here: if the upgraded MiG-29 (but not the MiG-35!) Is relatively cheap for all its drawbacks, then the price of the Su-30MKI announced in open sources is 80 million dollars. That is, almost like the F-35A. “And now we summarize the price of machines, maintaining their suitability for operation and modernization. We get the amount from 185 to 210 million dollars for each (!) Car in the next 35 years. And the squadron, respectively, from 2,22 billion to 2,52 billion dollars. The amount is considerable, ”the author adds. 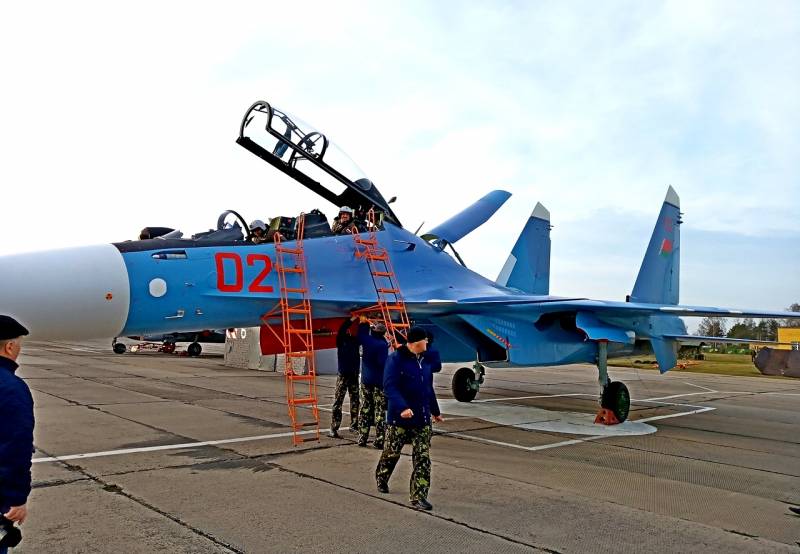 It is difficult to say how exactly these calculations are true, but there is a sound grain in these considerations. As in the thesis that the “dryers” have a combat radius that is excessive for the Republic of Belarus. Do not forget that the length of the country from north to south is 560 kilometers, and from west to east - 650. At the same time, the Su-30СМ fighter has a practical range of 3000 kilometers, and a combat radius of about 1500.

What is the result? You need to understand that everything has its own term. If earlier the Su-30 could be called a relatively modern machine, now it is not quite so. Moreover, the aircraft is quite expensive: both in nominal terms and in terms of operating costs. In this regard, Belarusian experts are absolutely right when they say that MiGs of a new construction or, say, the Swedish Saab JAS 39 Gripen, would be better suited to their country, despite their limited combat capabilities. In the end, it is unlikely that Belarus will fight with one of its neighbors.