Defense of the Russian Arctic: Moscow will not be limited to icebreakers alone 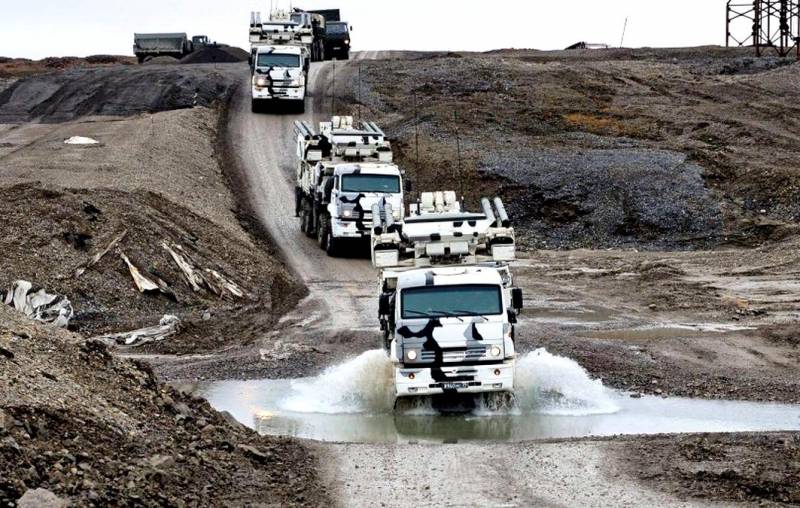 Sixty years ago, on December 3 of 1959, the famous Soviet icebreaker Lenin was put into operation. Today this date is very symbolic. Indeed, interest in the Arctic, its natural resources and the use of the northern seas as a transport artery is growing, and with it the need to increase the protection of Russian strategic interests in this part of the world is becoming increasingly relevant. Ultra-modern icebreaking fleet weapon, mobile military units. What else does our country need to protect the Far North?

The world's first atomic icebreaker "Lenin", which turned 3 on December 60, has become a true symbol of the successful development of the Arctic by our country. Who, if not Russia, should develop territories that adjoin our northern coast? Today, the icebreaker fleet is the real pride of the country. Not a single state in the world, including such developed and rich countries with access to the Arctic seas as the USA, Canada, Norway, has such an icebreaking fleet.

While the sea spaces of the North are chained with Arctic ice, even the Americans with all their claims to the “international status” of the Northern Sea Route have to request Russian icebreaking support. After all, how else would you go along the highway?

Both the United States and Canada at one time tried to create their own atomic icebreakers, but ultimately abandoned these projects. Today, Russia, as the heir to the Soviet Union, is practically a monopolist in the field of the nuclear icebreaker fleet. And the icebreaker "Lenin", the first in the glorious series of nuclear icebreakers in our country, once demonstrated to the whole world the successes of our country in icebreaking. “Lenin” served faithfully for thirty years and was decommissioned in 1989, shortly before the collapse of the Soviet Union. 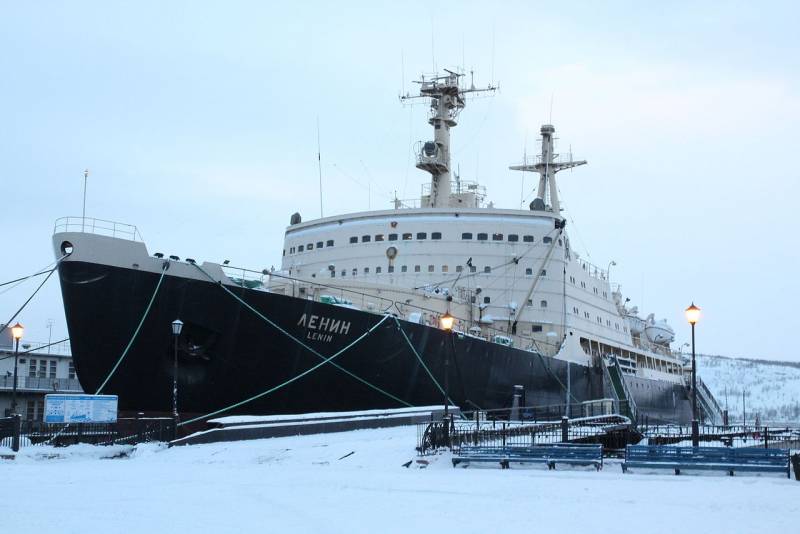 Icebreaker "Lenin". Photo: Wikipedia / Insider
Since that time, “Lenin” has been permanently parked in Murmansk and is an object of cultural heritage of our country, a genuine monument to the grandiose Soviet atomic project and Russian shipbuilding in general. As for the fulfillment of tasks in the Arctic, today the successors of Lenin cope with them - modern Russian nuclear-powered icebreakers - Yamal, 50 Years of Victory, Taimyr and Vaigach.

Recently, the Russian military department reported on strengthening the defense of the Northern Sea Route - the most important maritime artery connecting Europe and Asia and passing along the coast of the Russian Far North.

Priority was given to the deployment of the latest armaments at military bases in the Arctic, with the help of which Russia expects to repulse any foreign powers if they try to encroach on the interests of our country in the Arctic.

Russian military bases on Franz Josef Land and Kotelny perform the most important tasks of protecting the Northern Sea Route in the west and in the east. Naturally, in the Arctic, one of the main tasks is to prevent the entry of foreign warships into the Russian-controlled sea artery. Russian latest weapons, for example, the batteries of the Bastion complex, will perfectly cope with this task.

Twelve launchers with Onyx supersonic anti-ship anti-ship cruise missiles - that's what the Bastion is. Each rocket is equipped with an 290 kilogram warhead. Three such missiles - and the enemy frigate will sink, and five missiles are enough to sink an enemy aircraft carrier. 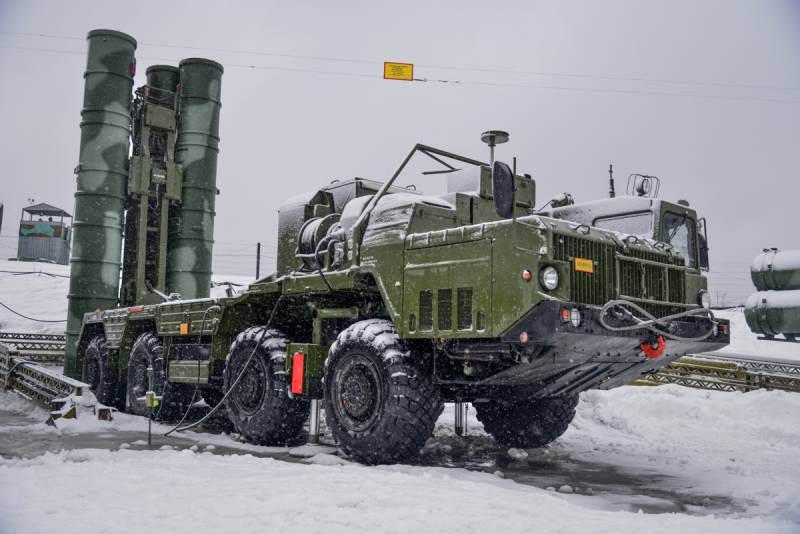 C-400 Triumph anti-aircraft missile system. Photo: mil.ru
The main advantage of the complex is its placement in the depths of the coast. Thanks to this, the enemy deck aviation unable to hit battery positions. The complex, in turn, is deployed in five minutes and remains up to five days in a state of full combat readiness.

The missiles launched by the complex are practically indistinguishable even for the most powerful modern radars, while they constantly maneuver and change direction, flying over the sea surface at a height of no more than a few meters. Naturally, in such a situation, the radar systems are unable to calculate the missile and it hits the target - the enemy’s ship.

In September 2019, a missile system located 200 km from the coast, during military exercises, was able to easily hit a special target simulating a ship. The exercises were held in Chukotka, and the Bastion practiced striking at a target located in the Northern Sea Route.

Then, in September of 2019, it became known about the deployment on the Novaya Zemlya archipelago of the latest S-400 Triumph anti-aircraft missile system - the very one that the Americans and other potential opponents are terribly afraid of. To ensure the operation of C-400, the Voronezh radar stations were deployed in Murmansk and Vorkuta, whose task is to warn of a missile attack on our country.

The latest radars operate at a distance of 6 thousand kilometers. That is, facing north, they control the northern regions of Canada and the United States. Originally created to illuminate targets, radar stations can also set targets for the C-400 Triumph, and no one doubts the ability of the latter to shoot down any air target, including a ballistic missile.

Cruise and ballistic missiles, stealth aircraft - the radar station is capable of detecting almost any targets, after which information about them comes into the C-400 Triumph batteries and anti-aircraft missile systems are already in operation.

In addition to anti-ship and anti-aircraft systems, radar stations, the Russian Ministry of Defense pays great attention to improving the armament of the aerospace forces deployed in the Far North.

Recently, for the first time, a test launch of the “Dagger” rocket from the high-altitude interceptor MiG-31K was carried out. Such interceptors are also based in the Far North and, considering the developing speed of almost 2,5 thousand km per hour, they are capable of flying to very different regions of the Arctic in a very short time. 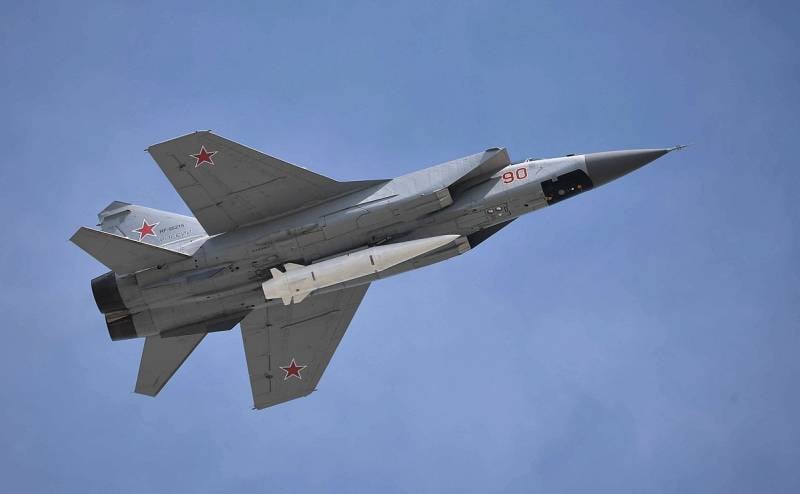 MiG-31 with a dagger. Photo: www.kremlin.ru
It is clear that all of these complexes are deployed in the Arctic for a reason. Recently, the Russian leadership is extremely puzzled by the need to increase the security of the Northern Sea Route. This is due to several factors, among which the main role is played by the growing US claims for the "international" nature of the highway.

Russia has every right to control the Arctic

Russia cannot afford to turn the NSR into a free shipping zone for foreign ships. After all, most of the Northern Sea Route runs along the Russian coast and falls on our territorial waters. What kind of defense capability of the Russian state can be discussed if the United States, Great Britain or, for example, China conduct their warships along our borders without permission from Moscow.

The United States has repeatedly stated the need to expand the US military presence in the Arctic. But the States themselves control only a small part of the global Arctic space in Alaska. In addition, there are NATO bases in such Arctic countries as Norway, Canada, Denmark (Greenland belongs to Denmark). However, the American military leadership, speaking of expanding its presence in the Arctic, clearly means those areas that are located in close proximity to Russian borders.

The Pentagon is also interested in penetrating the Arctic because for the time being, Russian missiles stationed in Siberia remain inaccessible to American complexes located at military bases in Eastern Europe - in Poland and Romania. But if American surface and submarine ships penetrate the Arctic, then another thing - to Russian Siberia will be a completely different distance.

Thus, the Russian Arctic is a cherished goal for the American military-political leadership, and Washington’s ambitions will only grow. But this is not the only reason for interest in the northern seas. There are still important economic advantages of access to the Arctic.

Firstly, these are the natural resources that the Russian Far North is rich in. About 30% of the world's oil and gas reserves are concentrated here. While most of these reserves have not been explored and are not exploited, but in the future the question of developing Arctic deposits will inevitably arise. And it is clear that the Americans do not want the only beneficiary of the exploitation of oil and gas fields in the Arctic to be Russia.

Secondly, the Northern Sea Route, as has been noted more than once, is the most important highway connecting Europe with East Asia. Compared to the capabilities of the NSR, both the Suez and Panama Canals fade. But now the Northern Sea Route is completely controlled by Russia and the Americans are very unhappy with this situation.

Currently, in addition to Russia, the USA, Canada, Denmark, Norway, Sweden, Finland, and Iceland claim a special status in the Arctic. China, Japan, Great Britain and even France, India, and the Republic of Korea do not hide their Arctic ambitions. But from a legal point of view, those countries that have access to the Arctic seas or their own parts of the territory located in the Arctic have real rights to the Arctic space. 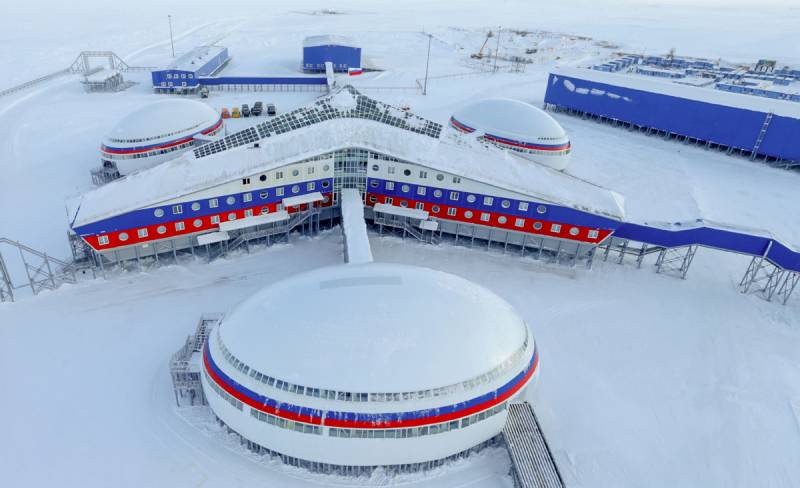 Military base "Arctic trefoil." Photo: mil.ru
The rights of various states in the Arctic are governed by the special UN Convention on the Law of the Sea, which was adopted back in 1982. In accordance with this document, the right to develop subsoil in the Arctic is granted to states that have their exclusive economic zones (up to 200 miles wide) and continental shelves (up to 350 miles wide) in the Arctic region. It is clear that China or France do not have such zones, the USA and, for example, Norway, these zones are very limited, but our country has the right to exploit the bowels of the largest part of the Arctic space.

It is the latter circumstance that annoys the United States and some other states, which is why Washington is regularly trying to challenge Russia's inherent right to control the Arctic. But both from the legal point of view, and from the point of view of the national security interests of the Russian state, we have every right to not let anyone into those Arctic regions that adjoin our borders.