Largest in the Soviet Union: B-6 semi-rigid airship 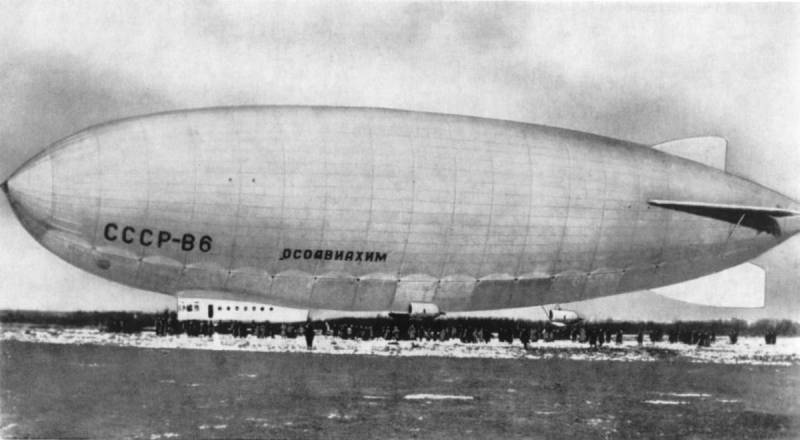 Back in the 20-e years, a foreigner jumped into the Soviet Union, offered to organize an international airship route through our country. Especially popular, as a rule, were the northern routes: there, due to the peculiarities of the shape of the globe, it would be possible to save at distances during transcontinental flights.

There were thoughts about internal lines - for example, from Leningrad to Vladivostok. The leadership of the country liked such ideas - there was something gigantic in them, corresponding to both the spirit of the times and the formula of “catching up and overtaking”. However, there was not enough money for serious investments - for example, the transcontinental airship line proposed by Walter Bruns was supposed to cost one fifth of the country's foreign exchange reserves.

At the same time, the visitor promised golden mountains, but the concrete calculations made by the State Planning Commission showed that, at least in the first years, the line would be unprofitable. True, then there was the assumption that the very fact of launching an airship highway would make a transport revolution, and those wishing to quickly get from Europe to Asia and back would pour into the Union. But all these were just guesses. 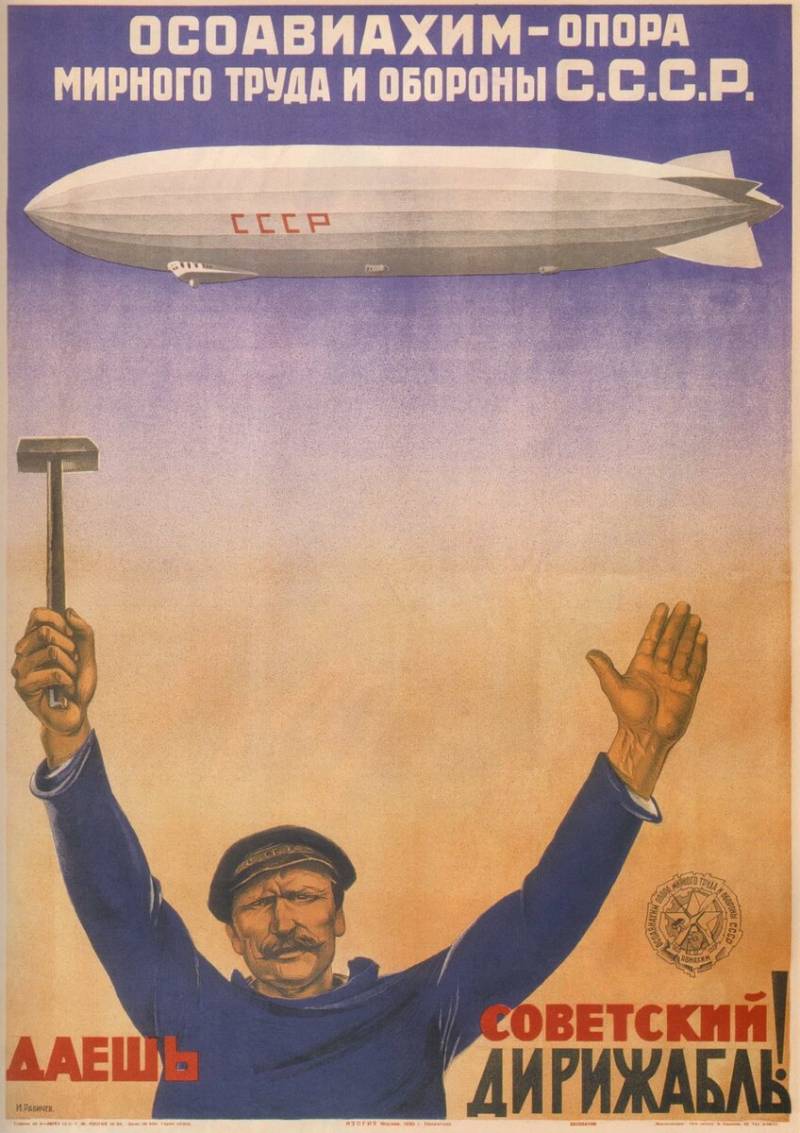 Airships in the USSR dearly loved. Well, at least the first time
Some experts objected, and also in the spirit of the “new time”. Like, the capitalists have competition - even if they are chasing the speed of delivery of people. Such a capitalist will come, conclude an agreement a few days earlier, and will win much more than he spent on a ticket. But in our country, they say, the economy is planned, and there is nothing for the “red directors” to carry airships - they will still have orders to tear apart and build intrigues. Anyway, this loss-making business will be.

But even such arguments, seemingly in line with then ideas, helped little. The image of a mighty airship was too strong, it corresponded painfully to the technical boom of its time, and it was very painful to have squadrons and flotilla plowing the space of giant leviathans. The management, perhaps, was not in a hurry to rush to organize expensive lines, but wanted a lot of large airships. In the end, they will always find application - not for the delivery of passengers, but for patrolling the border or supplying hard-to-reach facilities.

To get large and beautiful airships, you first needed to gain experience on the small and modest. A design school was required. You could get it either by stuffing cones yourself, or under the guidance of foreign experts. If you choose experienced and committed to cooperation, there will be fewer cones, by the way - this is an undeniable plus.

We decided to follow the “foreign” path. It was possible to buy a hard airship without problems in the 1931 year for Moscow only in Germany - the country had not yet come under Nazi rule, and, in general, was quite friendly towards the USSR. 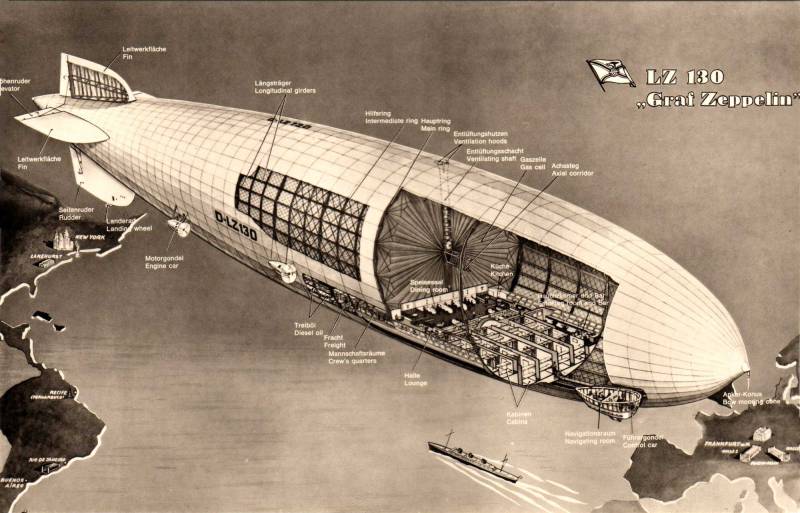 Giant hard airship from Germany. Soviet aeronautics almost went this way
The Soviet emissaries turned to Zeppelin: we want, they say, a hard airship. Not very large, only 30 thousand cubic meters. And your engineers, to help us establish the construction of a large one - no less than the "Count Zeppelin." The Germans rejoiced - the Great Depression in the yard, and here is such an opportunity. And they offered to do everything for 5 of millions of brands.

The USSR, at that time, was rapidly industrializing and buying abroad not only airships, but also entire turnkey plants. Therefore, the currency was valued even more than its weight in gold. And the Politburo decided that the Germans should not be given more than 4 millions. Negotiations took place - only the price of 500 thousand marks was reduced. And that was not enough.

Then they chose the second option - a semi-rigid airship that does not have a full frame. Instead, a keel farm gives rigidity to the shell - a forced decision is not from a good life. But the combination of price-quality option was perhaps the best.

Moreover, an interesting and cheap option loomed. "Option" this name was Umberto Nobile. The Italian has already flown in an airship of his own design to the North Pole in the 1926 year. The head of the expedition, however, was the Norwegian Amundsen, and the airship “Norway” was called - Amundsen bought it. But Nobile was responsible for the flight itself and led the airship.

As a result of a flight over the North Pole, Nobile’s career went up sharply - Mussolini made him generals, and Italy - national heroes. In 1928, Nobile went to the pole for the second time, this time on the Italy airship, which in general repeated the design of its predecessor. 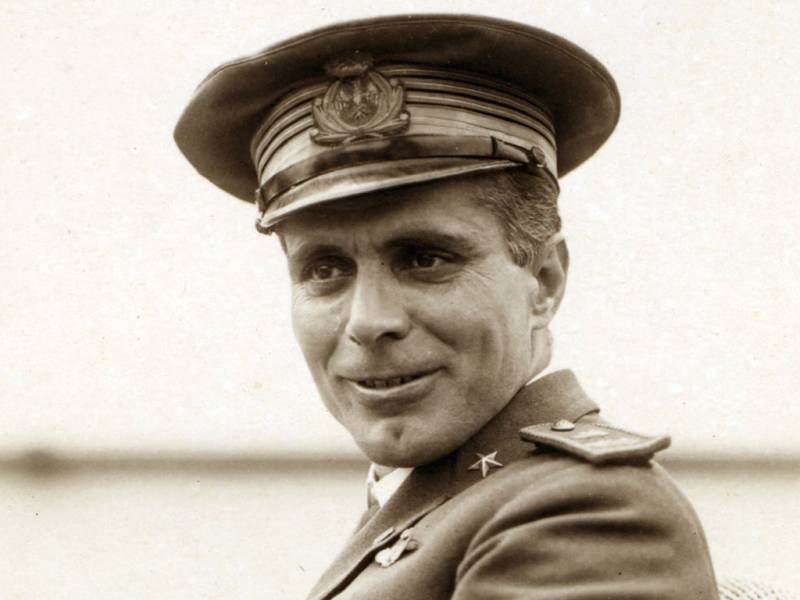 Umberto Nobile
The result, however, turned out to be the opposite - crash, failure, opal. Nobile himself took what happened very close to his heart. He needed to prove to the whole world that his aircrafts were reliable, and the Soviet Union needed help in building modern airships. This could develop into mutually beneficial cooperation.

Not only that, Nobile was ready not only to go by himself, but also to drag his own design team into the USSR. In terms of currency consumption, the option was extremely cheap - only 40 thousand dollars a year. Therefore, Moscow quickly approved the idea.

The Nobile Group set to work in the fall of 1932. The Italian did not begin to reinvent the wheel - instead, he simply modified “Norway” and “Italy”. Nobile took with him the general drawings, but then they had to be clarified - to recalculate taking into account the materials available in the USSR and the improvements made.

Not everything went perfectly - because of the rush, I had to repeatedly correct and redo the finished drawings. There was also a lack of specific details, such as hinges that were still difficult to produce in the USSR.

Fortunately for Nobile, a set of the necessary hinges was available in Italy - he knew that they managed to make them for one of the canceled airships. But when trying to buy them, he was faced with sabotage from ministerial offices. Enemies organized the sale of hinges for remelting - "so that the Bolsheviks would not get it." Fortunately, Nobile was quick, and intercepted the cargo shortly before processing - and paid for it not the full cost, but the price of scrap metal. 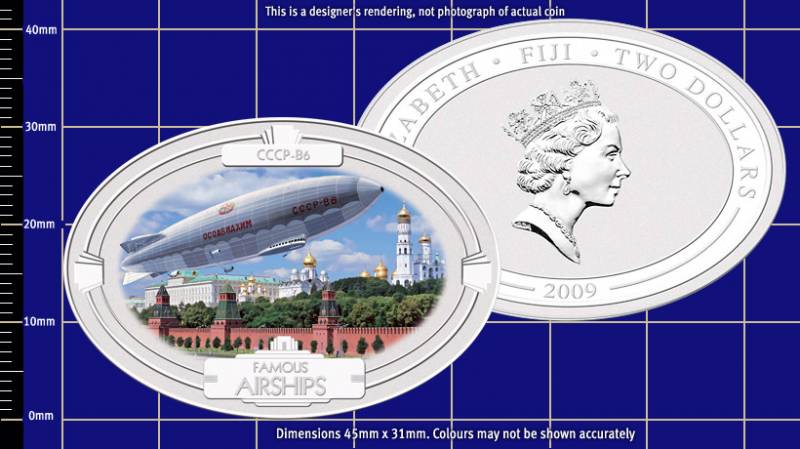 B-6 on a New Zealand collectible coin. World Airship Series
The resulting B-6 airship was perhaps the best semi-rigid airship at that time. If only because Nobile had the experience of constructing two of the same airships, and he knew all the weak points.

The first flight of the B-6 occurred in November 1934 of the year.

Big problems in the small airship

True, at this point the B-6 infuriated many already by the very fact of its existence. The dates of readiness were postponed more than once - all dates were torn down many times. And the estimate was exceeded as many as 3,5 times.

Why? Rush. Inexperience in organizing airship construction with the inevitable incision into all “pitfalls,” which even Nobile’s active help could not level. Finally, overly optimistic plans.

But even after the delivery of B-6, alas, things did not go well. It was not possible to find a working scheme for setting the ship on a profitable route - because for this it was necessary to massively build infrastructure, and even before the construction of the airship itself. Time passed, and there was no solution to the accumulated problems. This was largely helped by the development of an alternative means - the aircraft. Pilots rescued the Chelyuskinites, lifted huge TB-3 into the air, conquered the Arctic.

The airships needed to prove their usefulness as quickly as possible. The most obvious option lay in the north - the country at that time was excited by the idea of ​​Arctic expeditions. There was an attempt to “attach” the B-6 for the landing of researchers at the SP-1 in the spring of 1937 — the world's first scientific station on a drifting ice floe. But Glavsevmorput refused - rightly fearing that the B-6 is not ready enough.

But January of the following year, 1938, brought an almost Christmas present for the airships. The ice floe with polar explorers began mercilessly breaking. Even worse - she was carried to the shores of Greenland, where very soon horns and legs would have remained from her. Scientists were required to film, and as quickly as possible. For the country, the case, as in the case of the Chelyuskins, was important and reputable. Therefore, they did not neglect any help in Moscow. And the B-6 crew was given the go-ahead.

The airship launched on February 5. There was little time for preparation, but it was carried out quite successfully - they organized a hydrogen refueling station near Murmansk, and delivered the necessary materials on time. Fleet ships entered the sea - to provide radio communications for the airship going on an important mission.

It would seem that the airships are about to differ, so much so that they will save all Soviet aeronautics from stagnation. But the brave crew was not lucky - the combination of fog, terrain and orientation errors led to the fact that a day after the start of the flight, the B-6 crashed into Mount Neblo, on the Kola Peninsula. 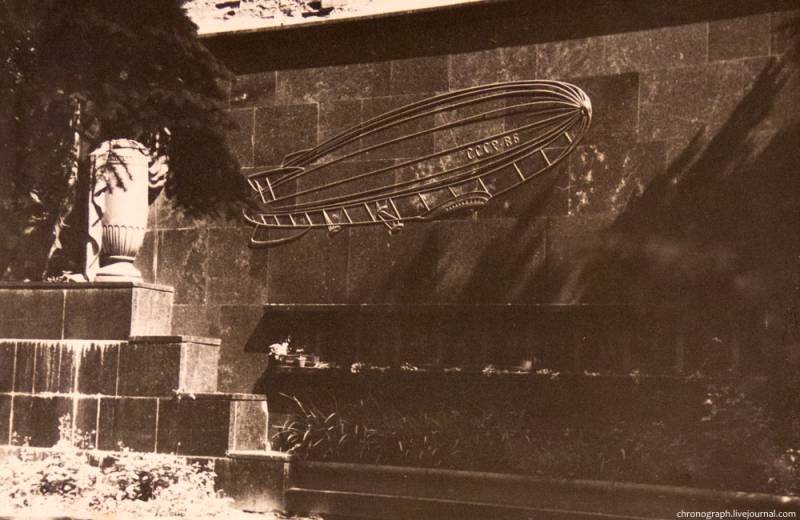 Burial of dead crew members at the Novodevichy cemetery
A keel farm grated, flames shot up. Most, 13 of the 19 crew members, perished. The survivors camped near the wreckage and began to wait for help.

Before their eyes the remains of the largest airship in stories THE USSR.