"Admiral fleet Soviet Union Kuznetsov "- so far our only aircraft carrier. Photo of the Ministry of Defense of the Russian Federation / mil.ru

At the moment, the Russian Navy has only one aircraft carrier, and the prospects for the construction of a new such ship remain unknown. The other day, messages about possible features of such a program reappeared - this time they are not optimistic and may be cause for concern.

The topic of future construction of the aircraft carrier 2 December raised RIA News. The agency talked to an unnamed source in the defense industry and received from him some information about the possible construction of the ship and the features of preparation for it.

The source indicated that the construction of an aircraft carrier ship is a very expensive affair. According to him, the design, construction and testing of one aircraft carrier can cost from 300 to 400 billion rubles. The source also noted that in the current state armament program (probably, the document for 2018-2027 was meant) such expenses are not provided.

The source knows that the Ministry of Defense does not reject the very idea of ​​building aircraft carriers. It studies the projects of such ships proposed by the design bureaus, but has not yet chosen the most successful one.

So far, the priority is the construction of two universal landing ships. They will be laid next year at the Zaliv plant in the city of Kerch and will be built in a few years. When working on these orders, the industry will have to work out the necessary technologies, which can then be used in the construction of an aircraft carrier.

Of greatest interest in the latest news is the estimated cost of a promising aircraft carrier. A source of RIA Novosti speaks of spending at the level of 300-400 billion rubles. for the design and construction of one ship of a fundamentally new type.

Curiously, such a cost estimate is not new. Numbers of this order were called a few years ago in the context of one of the proposed projects. Recall, at the Army-2015 exhibition, the Krylov State Scientific Center (KSCC) for the first time showed the general public a model of the multi-purpose aircraft carrier Ave. 23000 Storm. Then the possible characteristics of such a ship, as well as its cost, were disclosed. The aircraft carrier was estimated at 350 billion rubles. 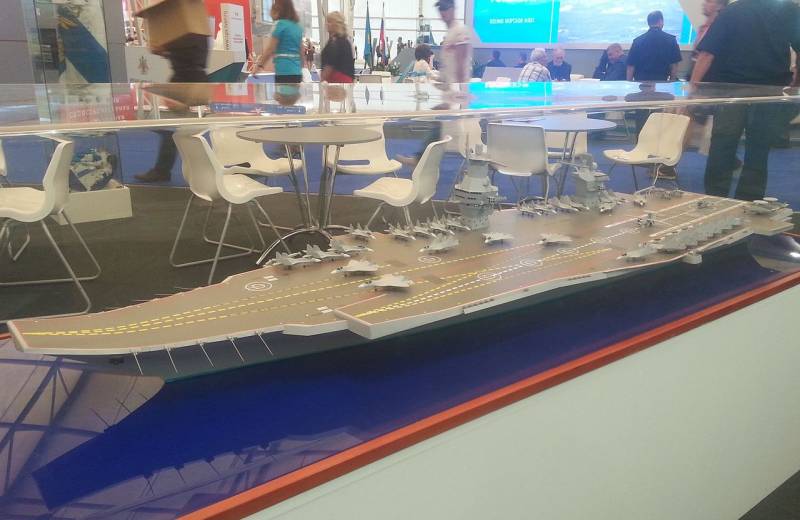 The model of the ship "Storm" arr. 2015 g. Photo by Wikimedia Commons
At the Army-2019 exhibition, the first demonstration of materials on the project of the aircraft carrier Lamantin from the Nevsky Design Bureau took place. This time they indicated only the main characteristics, but did not disclose the cost. At the same exhibition, KSCC demonstrated an updated version of the Storm project with some changes.

It can be concluded that the approximate estimates of the cost of a new aircraft carrier in recent years have not changed. Now 300-400 billions are mentioned, whereas earlier they spoke about average 350. Obviously, a more accurate cost of the program can be determined only after the start of real research and development work.

The timing of the possible completion of the project, the start of construction and the delivery of the finished ship to the Navy has long been a topic of controversy. These issues have been repeatedly raised at different levels, but the construction of an aircraft carrier has not yet begun. The latest news as a whole repeats the already known information and does not contradict the statements of officials.

A source in RIA Novosti said that the current state arms program does not include spending on the development and construction of an aircraft carrier. From this we can conclude that such work will start no earlier than 2027, when the current state program is completed.

In July of this year, Deputy Prime Minister Yuri Borisov made a similar statement. He indicated that in 2018-2027. Russian industry will not build a new aircraft carrier. At the same time, the current state program does not exclude the launch of R&D on this topic. The Deputy Prime Minister noted that the design should begin at the initiative of the Ministry of Defense.

Shortly before that, more accurate data were published in the media. In early May, TASS announced the possible dates for the start of R&D received from an unnamed source in shipbuilding. According to these data, the design is included in the State Program and will begin in 2023. The source also cited some of the possible requirements for the ship.

Different messages from officials and anonymous sources do not match each other in places, but still allow you to get the most general picture. It turns out that the Ministry of Defense is really going to develop and build a new aircraft carrier in the future. But real work in this direction will not begin until the mid-twenties. 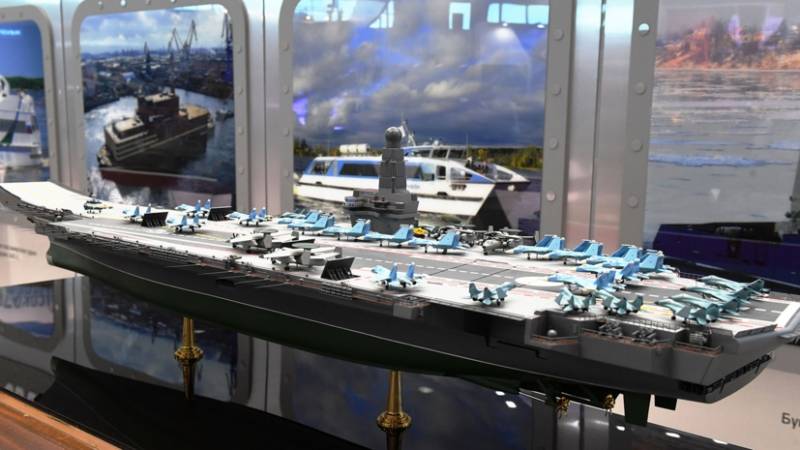 The model of the ship "Manatee" from the Nevsky Design Bureau. Photo by Alternathistory.com
It was previously mentioned that the construction of a ship of the “Storm” type from KGNTS can take about 8-10 years. It is easy to calculate when the fleet will be able to get the ship laid in the second half of the twenties.

In this context, the Zaliv shipyard is mentioned. In our country, there are several enterprises whose production facilities and docks make it possible to build large ships up to aircraft carriers. The Kerch Gulf is one of them. The company has two slipways of 400 m length and a dry dock with 360x60 m dimensions. In recent years, production modernization has been completed and new sites have been opened. All this makes it possible to build large warships and merchant ships.

A modest present and a great future

Recent news about the planned construction of a promising aircraft carrier for our fleet, as always, is of some interest and can complement the existing picture. However, they do not clarify all the desired issues. In addition, over the years, it has only been a discussion and plans for the future, and very distant.

However, there remain reasons for cautious optimism. It was repeatedly mentioned that the Navy and the Ministry of Defense are studying the future construction of an aircraft carrier and are considering proposed projects by domestic shipbuilders. The fundamental question of creating a new ship has not yet been resolved, but it is likely that this process will still be launched.

According to current estimates, all necessary work will require up to 400 billion rubles, most of which will be used for direct construction. Such expenses do not fit into the current State Arms Program, but may be provided for in the next. Thus, the new Russian aircraft carrier is still a thing of the distant future.

All this leads to one interesting consequence. Due to the lack of news about the specific actions of the Navy and the Ministry of Defense and against the background of a general interest in the topic of aircraft carriers, new estimates, forecasts and data leaks will appear. This process will end only with the appearance of real news about design and construction. However, immediately after this, a wave of forecasts and estimates of a different kind will begin.