"On the Doctrine of the Information Confrontation of Russia" 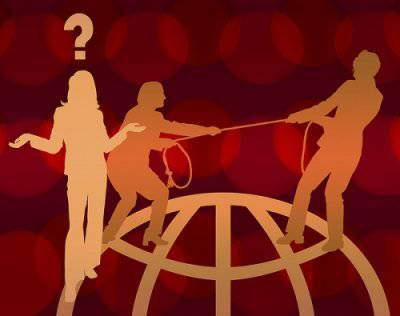 In August, a dirty information war was launched against Russia 2008

The time that passed after the Five-Day August War in the Caucasus in 2008 showed that so far all attempts by Russian statesmen to draw the appropriate organizational and managerial conclusions after anti-Russian informational aggression are blocked by the ideologists of Liberal Colonialism who have their supporters within the political elite of Russia.

In August, 2008 was a dirty information war launched against Russia (primarily by the American and British media). In December 2011 of the year - May 2012 of the year very much reminded of August of 2008 of the year. Although the informational impact was made thinner, using real mistakes of the current Russian government, its unpreparedness for active informational confrontation.

The main objectives of the information war against Russia

1. Blocking the creation of the Eurasian Union, by conducting a global operation "Anti-Putin" and repeating the scenario of the February 1917 coup d'état, with elements of Gorbachev's perestroika and the collapse of the USSR.

3.Organization of war (through provocations) in the Middle East (NATO military aggression against Syria and Iran), to use to destabilize the region against Russia.

The information operation “Anti-Putin”, developed by London, largely repeats the operations that the British Empire conducted against its main enemies in Europe — the leaders of France and Germany (Richelieu, Bismarck, De Gaulle). The USSR was also collapsed as a result of the information war, the active phase of which began with Operation Anti-Stalin. The developers of Operation Anti-Putin are MI-6 and the British Lobby in the USA (Zbigniew Brzezinski, a long-time agent of MI-6, Secretary of State Hillary Clinton, Assistant to B. Obama, David Axelrod - Trotsky-Bronstein's great-grandson). Coordinators in Russia: US Ambassador to Russia M. McFaul and former President of the USSR M. Gorbachev.

Attention should be paid to the fact that during the operation “Anti-Putin”, the same technologies of lies and disinformation are mainly used as during the operation “Anti-Stalin”. The only difference is in the presence of more modern mass media today (Internet, global television, social networks), which are mainly controlled by British intelligence MI-6 and business structures of various countries that have a legal address in the British offshore zones. A group of patriotic statesmen around V.Putin succeeded on 4 in March to block the coup d'état scenario leading up to the chaos of February 1917. However, ahead of the new information battle with the London center of the information war against Russia.

Informational struggle (confrontation) - a form of struggle of the parties, which is the use of special (political, economic, diplomatic, military and other) methods, methods and means to influence the information environment of the opposing party and protect their own in the interests of achieving goals.

In the case of information-psychological struggle, the main objects of influence and protection are the psyche of the political elite and the population of the opposing sides; systems of formation of public consciousness, opinion and decision making.

The information struggle (in the political sphere) includes three components

The first is the Strategic Political Analysis.

The second is the information impact.

Model of the Russian system of information confrontation

The creation of the INFORMATION SUPPORT system should become the main Priority of the Russian policy of the Information confrontation.

The Russian Federation must possess a powerful potential of information forces and means capable of ensuring the application of a given information technology and psychological information to any aggressor state or coalition of information resources of global transnational corporations.

Protecting the national interests of the state implies a comprehensive countering of informational threats of a regional and local scale. The Armed Forces and special services of the Russian Federation must be able to provide reliable protection of the country against information attack in peacetime, within the framework of the creation of the Global Information Command (GIK), which has special forces of Quick Information Response. The forces and means of the GLONASS Space Sensing System should prioritize the activities of the Fast Information Response units.

The interests of ensuring the Information Sovereignty of Russia predetermine the need to increase Russia's information presence in all strategically important regions of the world.

Placing abroad the information and analytical centers of the GIC should demonstrate the readiness of the Russian Federation to promote the formation of a sustainable informational strategic balance of forces in the regions of Russia's vital interests. It should be possible to respond effectively and quickly to any crisis situation at the initial stage of its inception, increasing the information flows of the Russian state-owned media as necessary.

The most powerful group of information forces and means GIK can be placed in Cuba.

Russia should consider the possibility of using information power to ensure its national security, based on the following principles:

Russia reserves the right to use all the forces and means at its disposal if, as a result of the unleashing of information aggression, there is a threat to the very existence of the Russian Federation as an independent sovereign state;

the use of informational power should be carried out on a legal basis and only when diplomatic measures to resolve a crisis situation have been exhausted or have proven to be ineffective.

In defining and implementing an information containment policy, a key role is played by the System of Special Structures of Information Confrontation.

It also seems expedient to create a special system of Measures for organizing and conducting information confrontation, as well as coordinating the implementation in practice by government bodies of defensive and offensive information operations.

What are the main functions of such a system?

First of all, it seems, identifying and predicting threats in the information sphere, conducting a complex of tactical, operational and strategic measures to prevent and neutralize them.

The next moment is the creation and maintenance in readiness of the forces and means of information counteraction, as well as their effective management.

The system of Measures for information countering Russia can and should function at four levels: federal, professional, group and individual.

In order to unite the whole complex of measures into a single whole, it is necessary to integrate them within the framework of the organizational and analytical system (SLA). It is a system for managing events at various levels: federal, professional, group and individual.

Algorithm of the organization of information confrontation

It is necessary LEGALLY to require a number of Western countries (primarily the United States and Great Britain, Japan, France) to return the gold of the Russian Empire to Russia (according to expert estimates, more than THREE THOUSAND tons of gold).

LEGAL REQUESTS should be sent to the UN and the OSCE, as well as to the governments of the USA and the UK, Japan, and France.

It is necessary to offer the world community a global joint program to combat Russian corruption. With the support of the UN, Russia may begin negotiations with the UK government on the return of illegally exported capital to Russia, since 90% of these funds are in British offshore zones (according to expert estimates, about 700 billion dollars).

Thus, Russia can quickly get hundreds of billions of dollars to overcome the second wave of the global crisis.

Of course, that the model provided by the author is not complete and complete. It can only serve as a basis for a broad discussion of scholars and practitioners, representatives of the political elite of Russia, the starting point for the development of the Doctrine of the information confrontation of Russia.